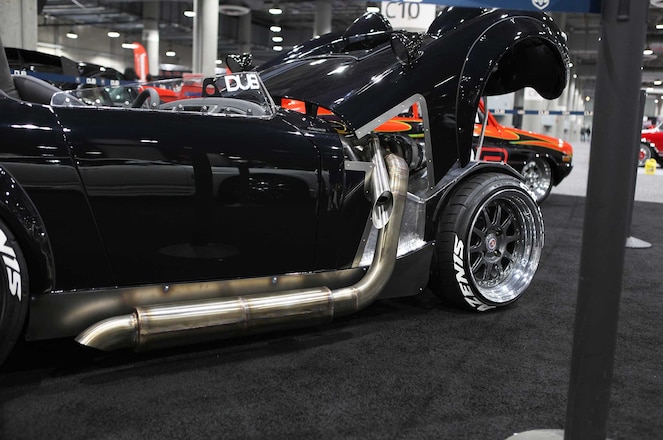 When Donald Healey laid out the plans for the Austin-Healey Sprite in the 1950s, he was entirely focused on just two things: affordability; and pure, road-going enjoyment. Due to keeping costs as low as possible to pass on to the consumer, the Mk I Sprite, affectionately known as the "bugeye" to U.S. buyers, was about as bare bones and no-frills as it gets. This meant a low entry price, but any "extras" were out the window. Fortunately, there's the aftermarket parts bin to help personalize and empower the scant little roadster, but if that's not enough there's always shops like Design Craft Fabrication to lend a hand. 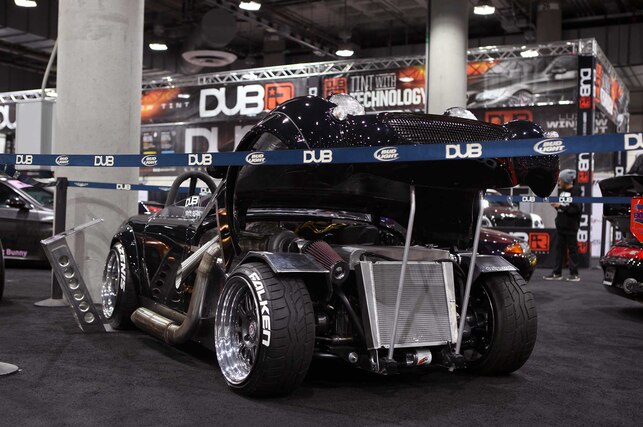 Based in Westminster, Calif., just outside of Long Beach, Design Craft Fabrication is owned and operated by fabrication extraordinaire (and ex-tuner mag editor) Gary Castillo. The San Diego transplant has often served as motorsport driver, crew chief, designer, fabricator, and all-around envelope pusher when it comes to anything automotive related. His latest project, custom built for a customer, was set to debut at the SEMA Show in November, but a lack of available booth space (a hurdle that many builders ran into this year) meant the unveil wouldn't happen in Las Vegas, but rather in Los Angeles a month later during the annual Auto Show. 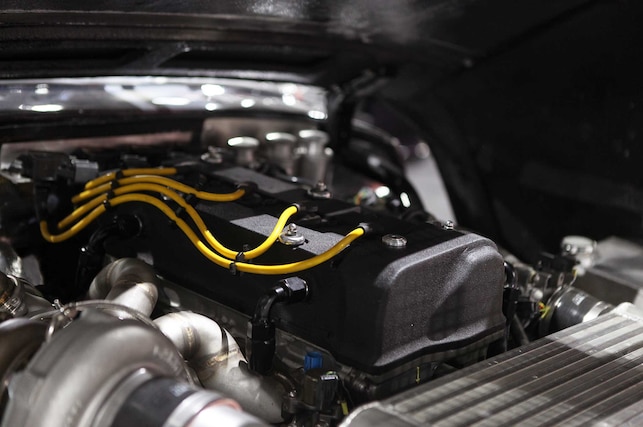 Original or nicely restored, Austin-Healey Sprite's might fetch a collector somewhere around 20K if the quality is there and much of the original car is still intact. This particular 1960 Sprite, however, isn't wearing much of its original hardware, and though it's not uncommon to see a newer model Sprite engine swapped into an older Mk 1, you've certainly never seen its chest cavity filled with Honda's "jack of all trades" K20 heart. Why a K-swap, you might ask? Gary states simply enough, "Being that Honda engines are something I enjoy working on the most, and the owner gave me free reign on the project, I decided to stick with what I know." And as if the 2.0-liter Japanese affair weren't far enough outside of the box, the transmission set up takes things a bit further.

Mated to the K20 block is an 8th gen. Civic transmission, turned longitudinally, that serves as a transfer case and, well, Castillo breaks it down best, "With the K-series transmission set sideways, the car's passenger side axle becomes the front drive shaft while the driver's side axle becomes a rear driveshaft. To make it work, we used a Nissan (GT-R) diff up front and the same goes for the rear." Though he makes it sound simple, the concept is genius, though the finished product is still being felt out. One area of concern that has to be addressed is the gearing. He adds, "The final drive ratio came out to around 16.5:1, which is ridiculous! Basically you can probably start the car from a stoplight in sixth gear. We're working on a set of drive shafts with automatic transmission planetary gears hooked up in line, to under-drive the ratio that comes out of the trans. Our end goal will be to come up with the same theory as our drive shafts, but have it built into the transmission." 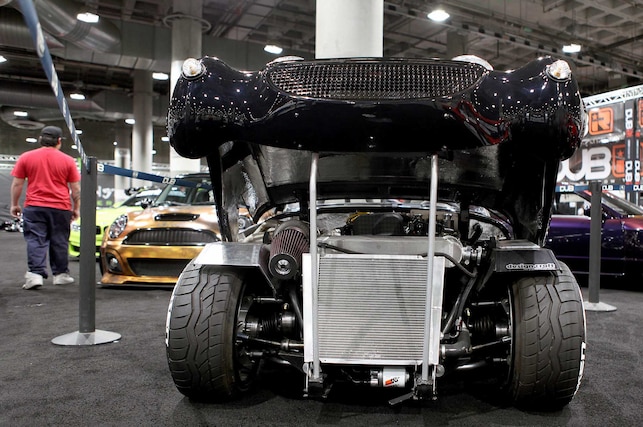 To help motivate the mighty Sprite dubbed the "AWDstin Meanie," Design Craft added JE pistons and K1 rods to the K-series block in order to help support the additional pressure courtesy of a Garrett GT3076 turbo, regulated by a Turbosmart wastegate and overseen by Hondata's user-friendly algorithm. Obviously the custom fabrication touches run rampant through the roadster's bay and include a one-off turbo manifold with side exit exhaust and dump tube while up front, a modified Koyorad and Davies Craig combo, placed strategically to work within the tight confines of the car's front end, help keep the temperatures in check.

While the side exit exhaust adds an enormous amount of attitude and serves as one of my personal favorite parts of the build, it's the custom vintage seats put together by Sparco that steal the show inside the cabin. The classic style and stitch on a shortened seat back frame are really the only seats that would look right inside this build and Sparco nailed it. The overall layout and materials used on the cockpit are strikingly modern and refined, while the custom shifter, completely exposed, gives the cockpit a raw and mechanical feel for tangible contrast. 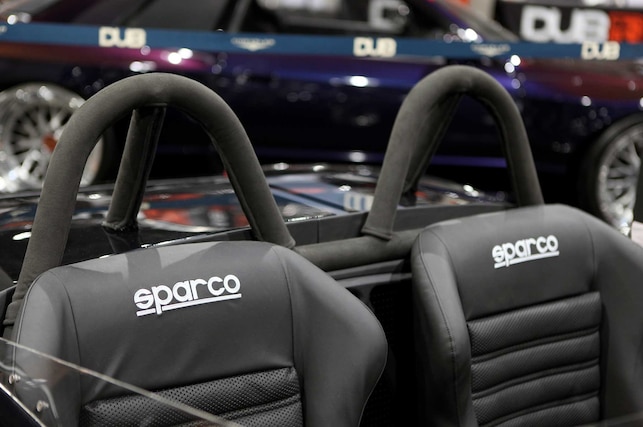 You notice the custom HRE wheels, Falken tires, and ultra-sleek windscreen right away. What you don't notice at first glance are the KSR hood vent and Sportcar Motion over fenders — both of which are universal, but typically reserved for Honda track cars. That's just the nature of Design Craft Austin-Healey Sprite; it flirts with all types of enthusiast build staples, pulls inspiration out of thin air, and confuses the hell out of many. All you have to know is it's but a sample of what Castillo and Design Craft are capable of. 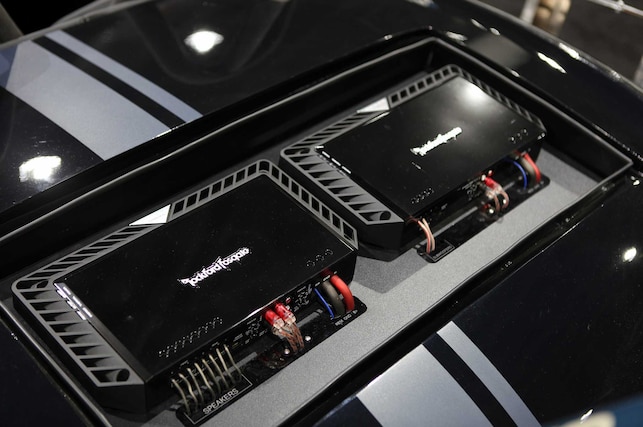 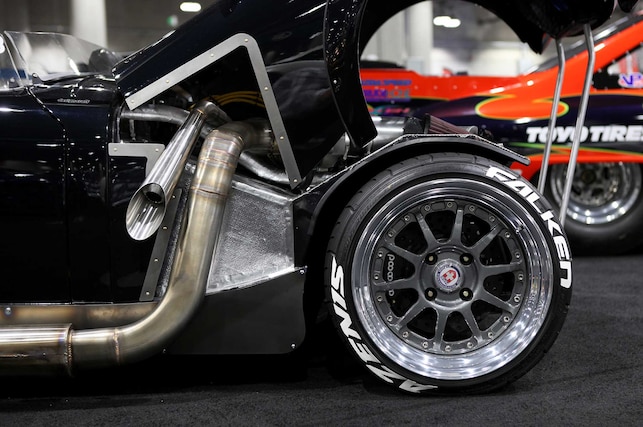