There's more than one way to rise and grind 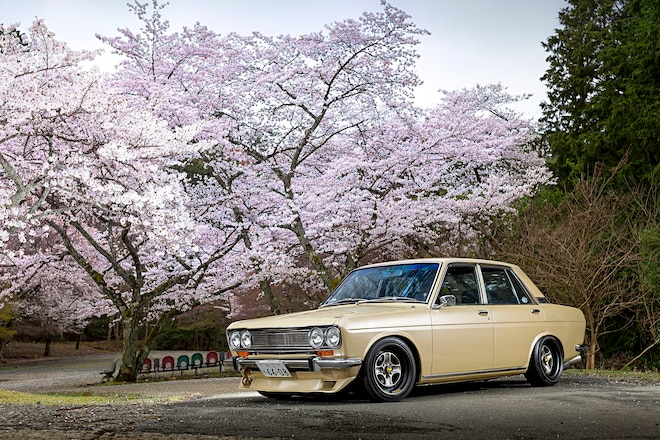 One of the greatest joys of aftermarket automotive ownership is buying a fully built chassis, and not having to do shit to it because the previous owner did such an immaculate job of piecing together everything. Unfortunately, over here in America, that doesn't always happen, and the majority of the features that land on our desk include phrases like, "Then I spent a bazillion hours fixing the previous owner's mistakes..." 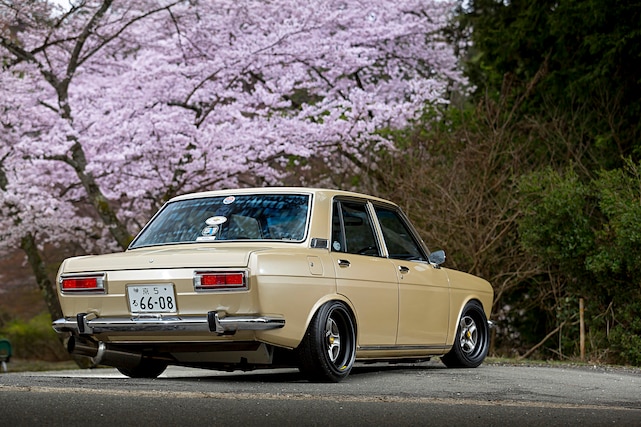 But over in Japan, people typically tend to hold themselves and their craftsmanship to a higher standard, and after a dozen years of consistent visits, I can attest that crappy builds are few and far between in the Land of the Rising Sun. While there certainly are still some "questionable" modifications to be found, the level of detail and quality of work instilled within a custom car over there is typically top notch, giving further reason for you to salivate over today's feature.

Shop owner Yoshikazu Naruko never expected that someday he would own something as batty as the custom Datsun here beneath all those gossamer sakura blossoms. His garage, Tire Shop Accel, has been an automotive staple of Kyoto since '01, and is by no means a tuning powerhouse like more renowned shops. 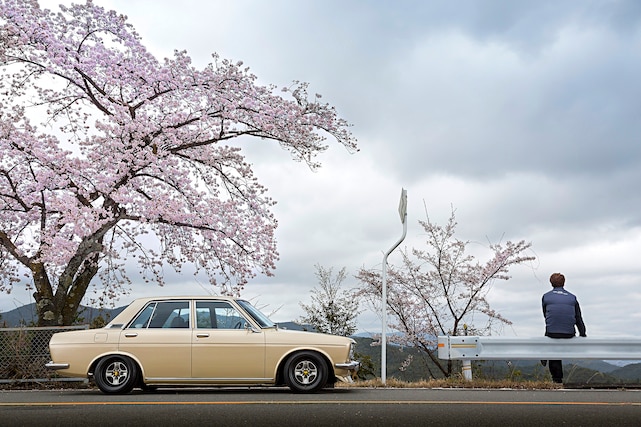 But what began as a super-small spot prioritizing tire sales, oil changes, and basic car maintenance quickly turned into a local hot spot for community-based hangouts and late-night wrench sessions. Since most of his customers are lifelong friends (many of whom work on their own cars), everything from microscopic Kei cars with sewing machine engines to hulking Detroit imports can be found on deck any given day of the week here.

As for Naruko-san's prized purchase, he tells us that he procured his squeaky-clean Datsun five years ago after a friend pointed it out to him. The shop owner immediately found himself smitten over the concept and the exclusiveness embodied within owning an SR20-powered 510. 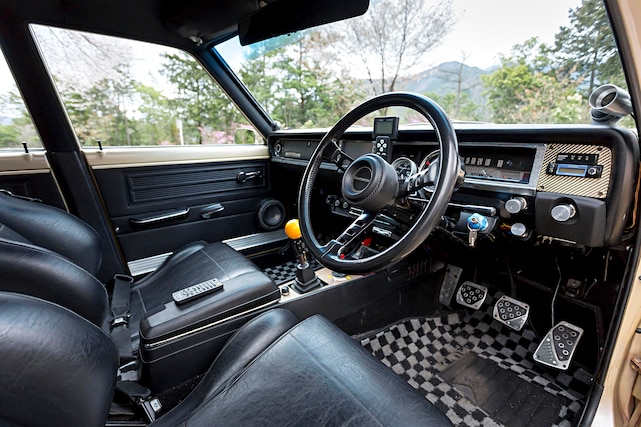 Once a sale price had been agreed upon, all Naruko-san had to do was fork over some Yen and then go pick up the little Champagne Supernova. Since the car was located in the Kyoto area, he didn't have to change the license plate or deal with transporting the sedan from one prefecture to the next, either. And because the Bluebird had already been finely tuned, it was ready to roll the minute Naruko-san took possession of the keys, a selling point that helped seal the deal for the detail-oriented shop owner.

Looking at the grand scheme of things, a '69 Datsun 510 Bluebird with Work Equip 40 wheels and an SR20 swap is not a common sight, regardless of whether you are stateside or in Japan. Toss in the fact that it features a rear-mounted cooling setup, some slick one-off interior goodies, and enough period-correct flare to make even Jay Leno pop his pants and you've got one badass build straight out of the box! 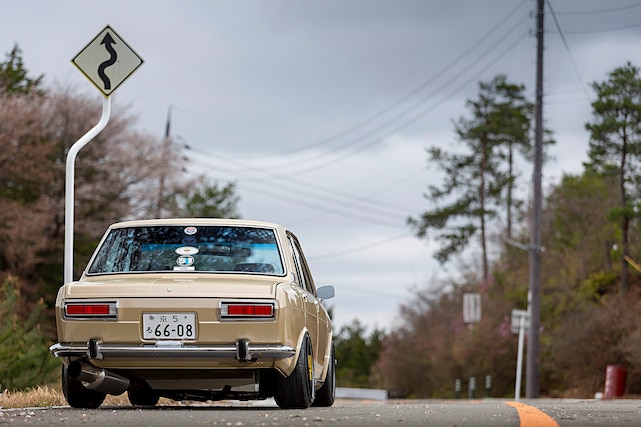 According to Naruko-san, the previous owner built the vehicle for drag racing, a surprising move considering this is a motorsport that remains widely unpopular with Japanese enthusiasts. From what we can gather, the previous owner started modifying the iconic 510 sedan back in '08, before calling it quits three years later after the SR powertrain, one-off exhaust, and new cooling system were swapped in.

The previous owner supposedly spent an inordinate amount of time fine-tuning the cooling system in the rear in order to accommodate the largest intercooler possible. This decision came after a few high-temp passes produced a plethora of overheating issues, causing the entire build to be put on hold over fear of the engine grenading, or worse yet...a car fire. 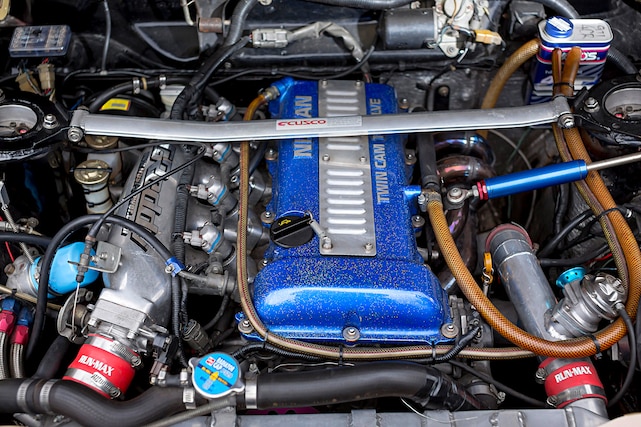 But after some seriously devout fabrication time (along with a fair deal of geometry and physics refamiliarization), the old 'Bird was able to fly once more, and to this day it is primarily used as a daily by the shop owner. Naruko-san has also grown quite fond of taking the car to Kyusha gatherings (vintage car events) and looks forward to driving it on track once a year alongside swaths of 510s in Hamanako and Okayama.

Much like the car itself, future plans are pretty to the point with this one. Despite the paint being in near-perfect condition, a respray is more than likely in the cards, along with a fresh muffler setup and some minor cosmetic work. Fortunately for Naruko-san, the Bluebird's previous owner did such a stunning job of modifying and manicuring the chassis that downtime spent on fixing miscues are sure to remain minimal at best. 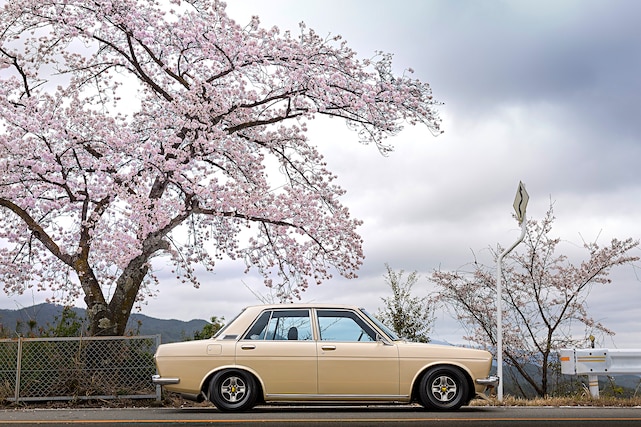 Clean and quiet 510 on the outside, mean S13 on the inside, Naruko-san's 300hp Bluebird flies through gears and eats up street tires like they are night crawlers. Classic plates, classic performance engineering ingenuity, and one classic chassis all make this one of the slickest Datsun builds in recent memory. So keep on flying that old Bluebird around town, Naruko-san, because the rising sun is up in the sky and it's time to rise and grind!

It's a Numbers Game 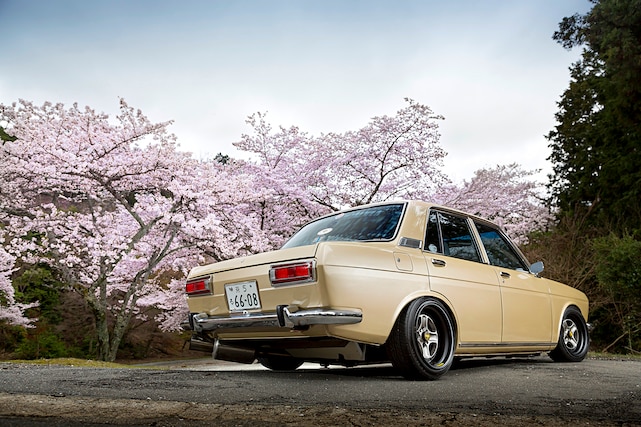 The single Kanji toward the top of Naruko-san's license plate is "kyo," which is the first of the two characters needed to spell out the word "Kyoto." As for the single numerical "5," that designates vintage status in Japan. This combination is extremely rare due to its originality and is something you don't see very often considering that the Japanese government switched over to using plates with full area names and three digits in 1971. 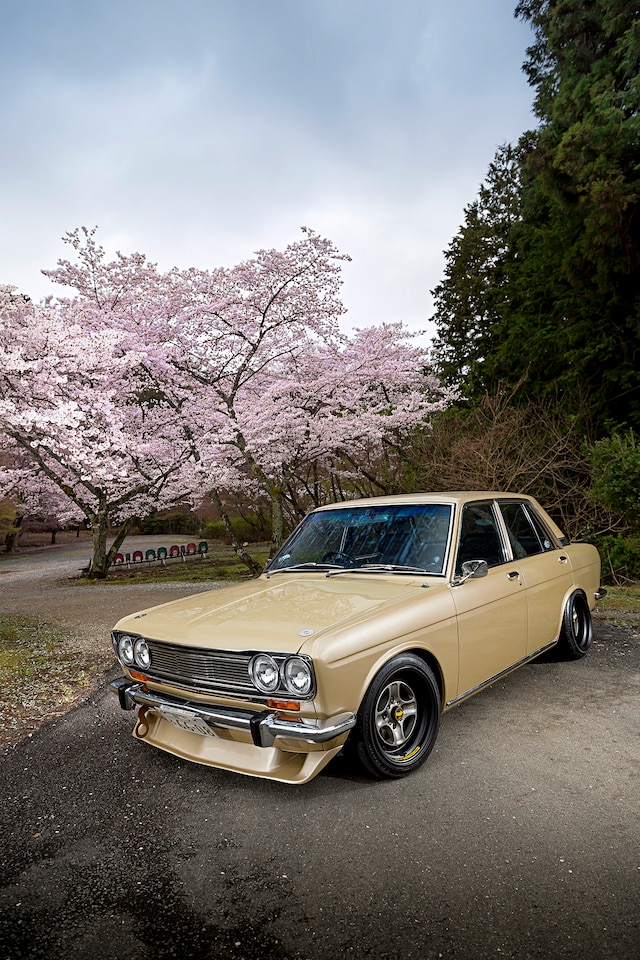 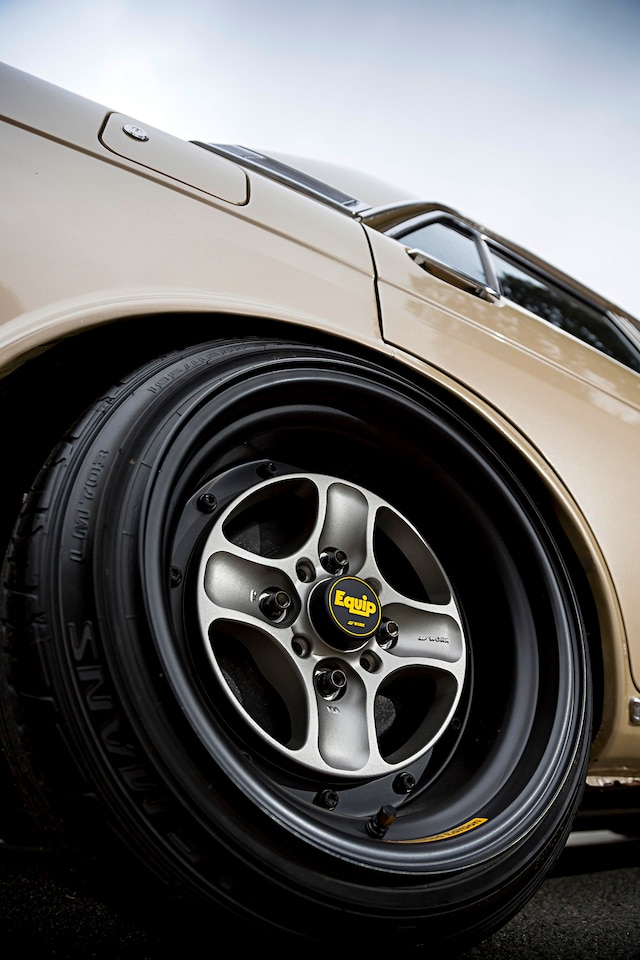