The little hatchback debut heard 'round the social media world 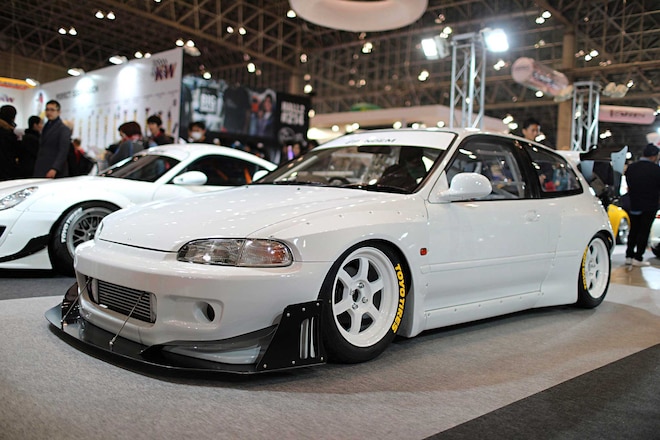 When the Tokyo Auto Salon rolls around each and every January, we expect to see a bit of frenzy around debuting demo cars like those displayed by HKS, Cusco, RE Amemiya and others. Over the years the event has never disappointed, and there are always a few standouts that seem to have everyone talking. In more recent years, however, the majority of cars being shared and drooled over seem to be sporting widened arches, fender flares, or a combination of both, and none has been more popular than the Pandem/Rocket Bunny creations of Kei Miura. 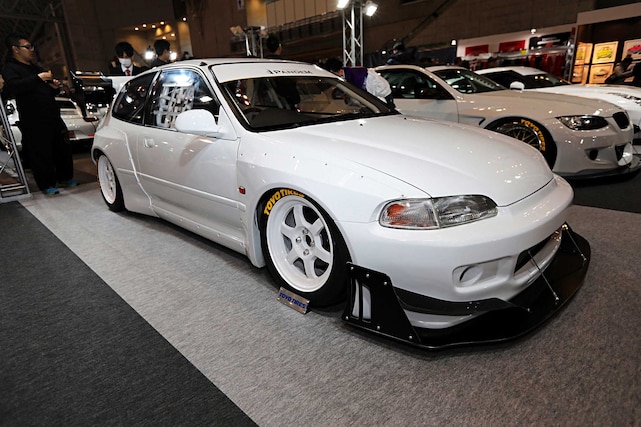 Some of the vehicles Miura chooses to fit with his signature style aren't surprising at all. R35s, RX-7s, and Toyota 86s are but a few and almost expected at this point, but when the Civic EG aero kit was created just a few years ago, it raised a few eyebrows. The Honda circle maintains a concrete hardline between those that opt for a mild, OEM-plus aesthetic, and others that say the sky is the limit. That second group certainly took notice of the aggressive makeover that consists of about a dozen individual pieces, each of which is a result of Miura's keen eye and liberal use of a precise 3D digital rendering device that helps insure the fit and finish is kept at a high level. 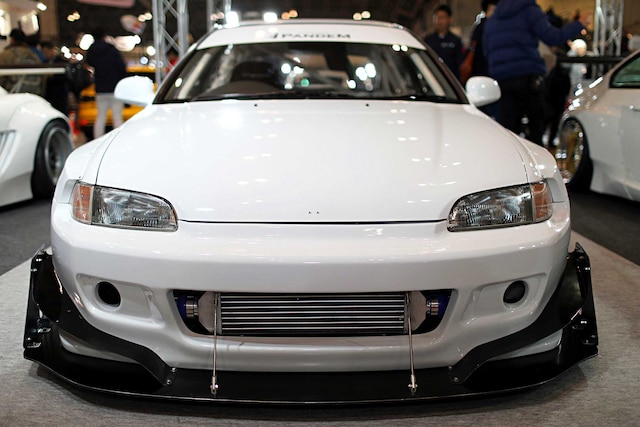 As the social media world began filtering through TAS 2018 images, the Pandem EG6 shot to the top of the most viewed list. The simplistic white on white appearance had no problem holding its own against fluorescent colored cars with wild liveries on the show floor. We were able to get a little bit of info on the car from its builder, thanks to photog Mark Gearhart and a little help from a translator.

To start, the hood wasn't opened up during the majority of the show, if at all, but under that factory bonnet you'll find the stock B16A fitted with a Trust turbo. Later this month, the crew is expecting delivery of a Quaife 6-speed sequential transmission, but it won't be mated to that 1.6L. Instead, a built 2.0L B-series is in the works with power goals in the 350 to 400hp range. Now, about that aero—obviously the wing is intense, with extended side pieces added to the roof wing which jut out well beyond the flanks before tapering back to the car's quarter panels. The extreme downforce might seem like overkill, but ultimately they'd like to compete in a hill climb event in Germany this year, if the stars are kind enough to properly align. 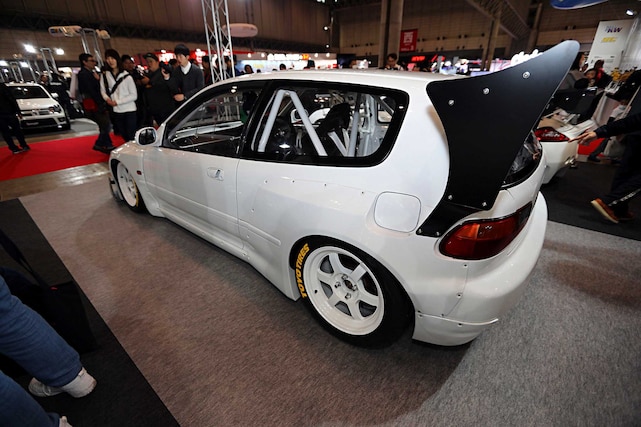 Beyond the shadow cast by the massive rear wing, the rest of the kit is standard Pandem, available just as you see it. Most of the U.S.-built cars using this kit are riding on TE37V rollers with offsets and widths that purposefully fill every millimeter of the bulked up body. This demo vehicle on the other hand, rides on rather tame offset TE37s that leave plenty of empty space underneath, especially up front where you'd expect to see more Toyo rubber. We're not exactly sure why that decision was made, perhaps it was to get the car extremely low for display being that it currently relies on Pandem's own suspension kit and adjustable ride height, or it might have something to do with this car being finished with paint just 48 hours prior to a long drive to TAS. The builders say there's still much to add, change, or adjust on this build as they come off of the mad dash to make the show and settle into their little masterpiece that, even in its initial state, has everyone talking. 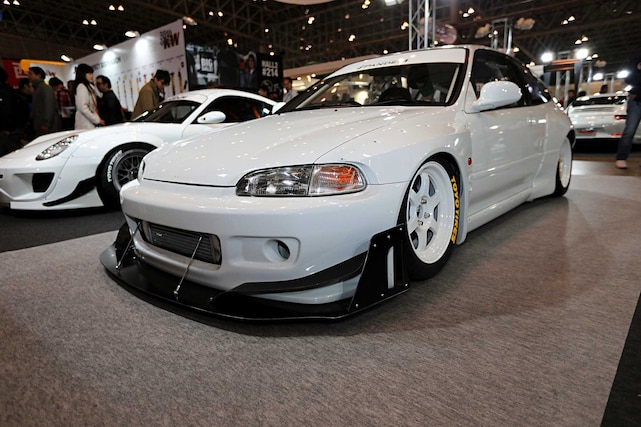 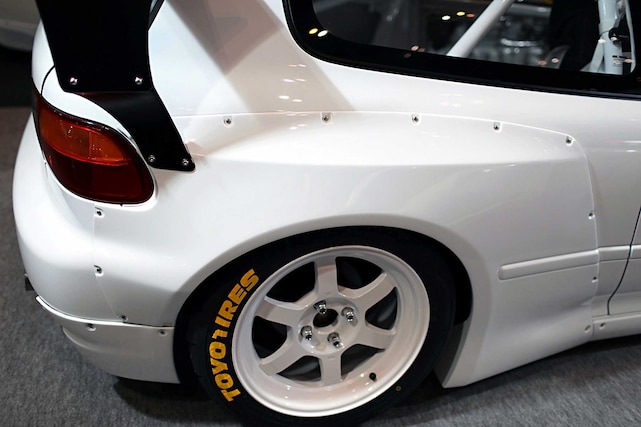 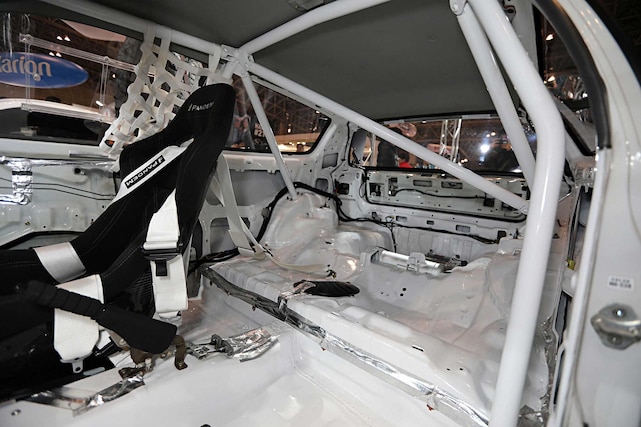 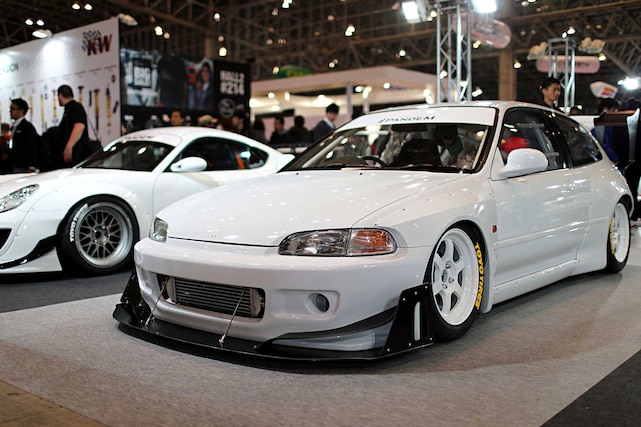