Little experience and no plan leads to the ultimate rat rod 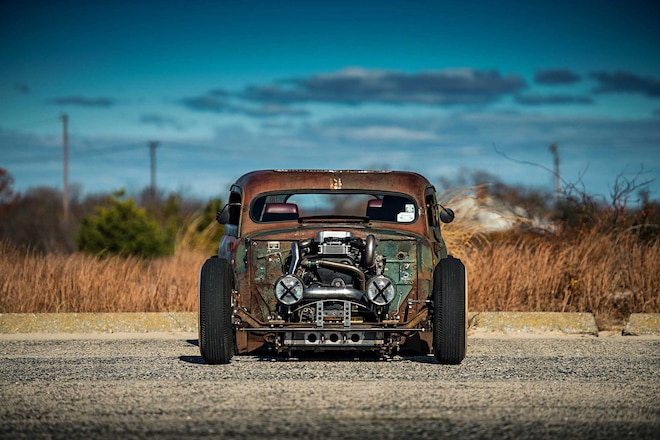 In the '90s, Chris Lee was into simple things like Sentras, SR20 swaps, and then later, WRXs and the sort of bolt-ons you'd expect from a kid with a factory-turbocharged Subaru. It was all very predictable, tame even, and is exactly what led to "Blasfamous"—a post-WWII-era Ford pickup made new by way of things like a Toyota engine, a Nissan transmission, and a chassis built entirely from scratch, or as Chris puts it, "[it's] a ground up, homegrown mess of parts assembled in what I describe as a giant anxiety attack." 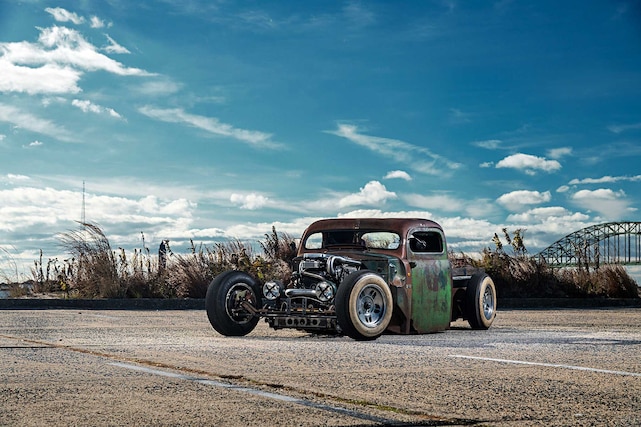 Attempt to cobble together a rat rod of your own and you'll soon find out there isn't any preexisting blueprint. The possibilities are too limitless to be bound by the opinions of any sort of Internet-residing experts. Googling how exactly you ought to go about getting things like a 1JZ-GTE, a Camaro radiator, and a Bronco rear end to all occupy the same space underneath a '49 F3 pickup cab won't bring up much of anything, either.

In concept, the entire project went together in reverse. Rather than penciling down a plan and amassing whatever parts he'd need to do things like get a couple of modern-day Mazda seats inside that cab of his, Chris began corralling a small wrecking yard's worth of car parts together within his "tiny garage" and worried about how they'd all come together at another time. "Most [of the] parts were chosen based on availability, price, and luck," he says. "If it was cheap and I had cash, I bought it, and then figured out how to adapt it to the build." 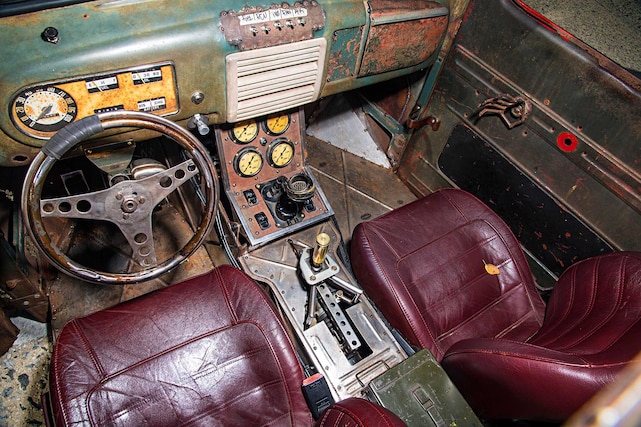 Adaptations like the complex bases Chris whipped up by cutting and welding together 14 different pieces of steel just to get a pair of RX-7 seats to fit. Or the rear exterior that's composed of a cut-down Chevy bed, a Ford tailgate that predates his F3 by at least a decade, and a frame that was, quite literally, taken from the trash. "The framing for the bed [was] picked fresh from the garbage," he wants you to know about the repurposed twin-sized bed that's been accented with bed rails made from the sort of wood pallets you'd normally chop up and toss away.

The whole process took Chris 32 months, he says, of which he expended just as much effort not doing certain things as he did doing others. "I decided that I didn't want to just drop a cab on an S10 chassis, and I didn't want an LS-powered custom vehicle to compete with the million already out there," he says. "Next thing I knew, I was knee deep in parts and ideas, and [had] no clue on where to start." 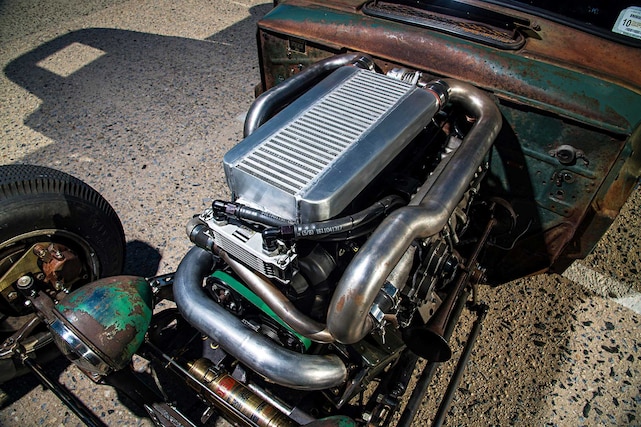 And by knee deep he's talking about the one-off chassis he built in lieu of that S10. According to Chris, it's all been hand-made, just like the cantilever shocks he fabricated into place along with the adjustable four-link suspension at both ends and tubular control arms. Despite the intricacies of all of this, don't think for a minute that Chris spent any of those 32 months bound behind a keyboard, conjuring up designs digitally. "Design [and] engineering were mostly done with cardboard and a mechanical pencil," he says despite his background using computer-aided design software. Besides the initial render he'd made using the computer, "everything else was eyeballed."

And custom. Aside from the adapter that allows that 1JZ and the 350Z's gearbox to cooperate with one another and a disc brake conversion kit made for the old Ford, everything else underwent Chris' cardboard and mechanical pencil treatment—this coming from a guy who was relatively new to the world of fabrication. "I started the same way most backyard builds start: with a Sawzall and an angle grinder," he says. "I chopped the roof and went from there. Nothing on this cab is untouched." 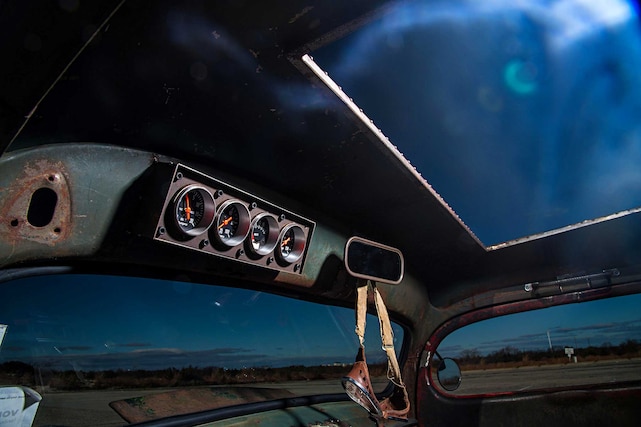 And nothing on this car is free of Chris' doing, like the doors' interior handles fashioned from his own hands, or the military surplus effects he used like WWII-era gauges, or the ammunition boxes he repurposed for things like an intake and a center console. "Everything was a challenge," he says. "When I decided to build a rat, I saw the direction most people went and figured it would be easy enough. [But there were] no references to put this stuff together and a lot of nasty responses when I first hit the forums with the idea."

Few forum monkeys could execute something of this magnitude, though, nor would they have the time. "Every single night after work, weekends, holidays," Chris says about the hours invested. "Hell, I even quit a few jobs to give myself week-long runs at building." It's a far cry from a Saturday and a SR20 swap. 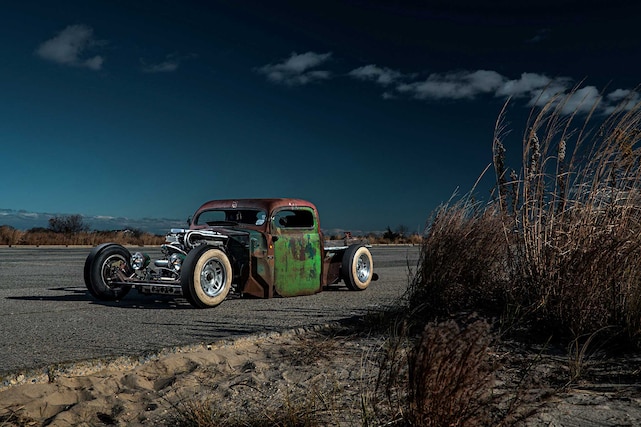 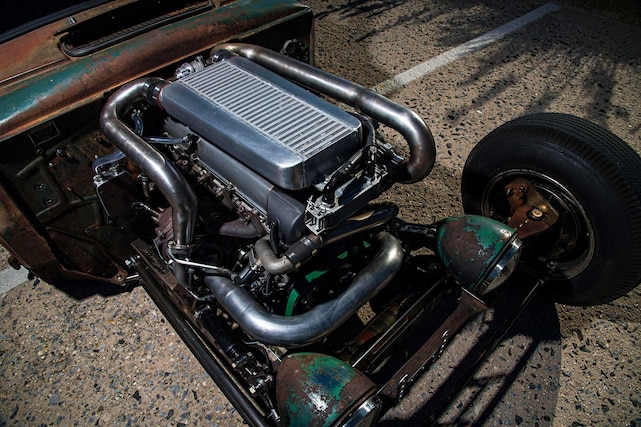 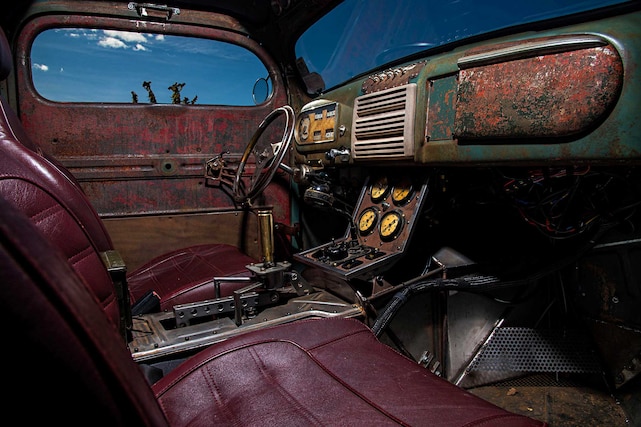 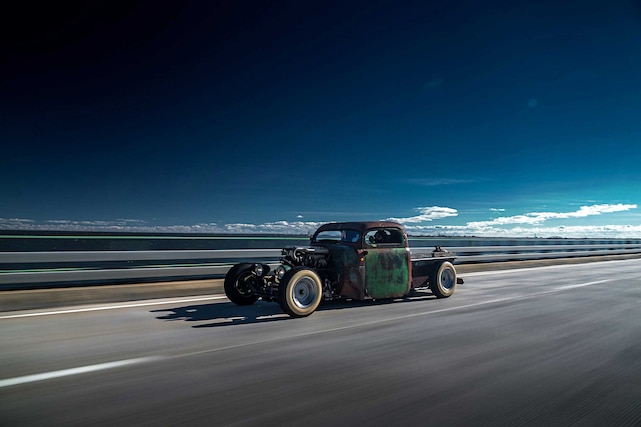