Never underestimate the power of pure cocoa. This magical bean not only tastes enchanted when cut with copious amounts of sugarcane, but it also has been linked to enhanced memory functions and an increased sexual appetite. That said, the reasoning behind Joe Bacigalupi's decision to own a "Hot Chocolate" Datsun 510 wagon goes far deeper than just surface spray and sleek chrome. Generating something that can be tasteful, memorable, and sensual all at once is just the tip of the dipstick for this build. 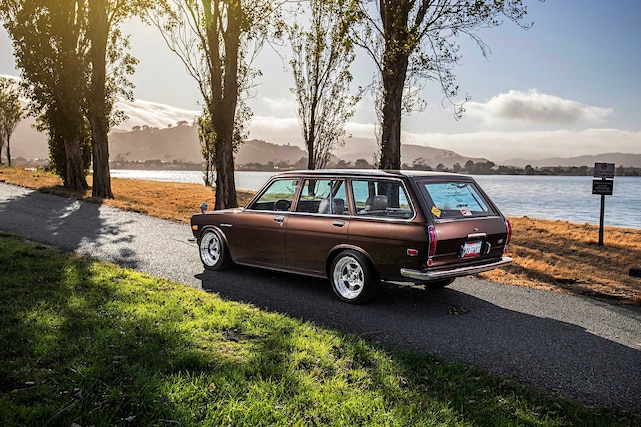 You may remember Joe's first feature in the March '11 issue. It was also a wagon, although a Voltex-armored Subaru WRX. Several years had passed and Joe developed the thirst for another project; this time around, he knew wanted a '70s-era 510 wagon. Unlike the Subie, which he picked up from his local dealer, getting an affordable, clean Datsun was going to require a bit more effort.

Scoring a 510 wagon proved to be a royal pain in the patella, and after a few months of fruitless foraging it was time to either move on to another chassis or make a hasty decision and go with the only option available in the area. A far-from-ideal donor had just materialized across the bridge from the San Francisco area where Joe resides, and since beggars can't be choosers the wagon fanatic made his move. 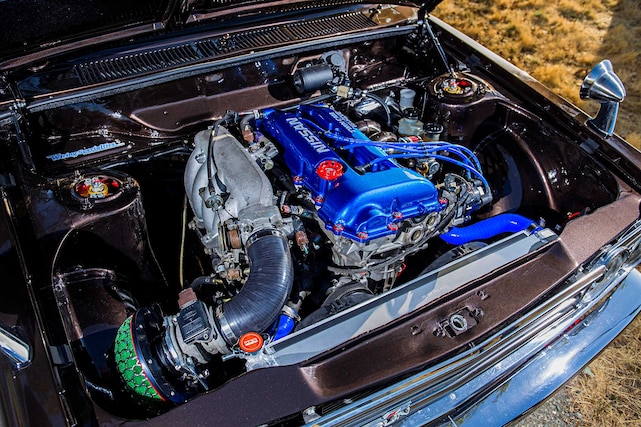 As Joe was driving his questionable purchase home that day, it became obvious the previous owner had handed over the keys but had failed to fill up the tank. After stopping at a local fueling station, Joe was dismayed to discover it was nearly impossible to pump gas into the vehicle with today's high-flow fuel pumps. The pressure from the modern pump easily overpowered the old filler neck, and in order to safely refuel, a 10-minute time frame needed to be allotted just to top off the tank. It was this inconvenience that served as the inspiration behind the conversion to a larger, 16-gallon tank and updated filler neck, a topic we will get to shortly.

Unfortunately, fuel wasn't Joe's only concern. The SOHC KA24 was in worse shape than Harvey Weinstein's career, and to this day Joe is still amazed both he and his Datsun made it back in one piece that night. The previous owner had literally done just enough to get the car running to sell it, and upon arrival back home the Datsun seemed to gasp its last breath as it was pushed into park.

Externally, the old war wagon wasn't looking much better. Someone had rattle-canned the entire outside black, and everything from the taillights to the rear reflectors and onward to the turn signals and window chrome had been sprayed over. Although new chrome can be easily sourced for two-door 510s due to having a broader fan base, it's damn near impossible to find clean wagon moldings. Even the grille had been tagged in black due to overspray, and its lower panel portion was missing entirely, a touch that Joe confesses was extremely difficult to source. 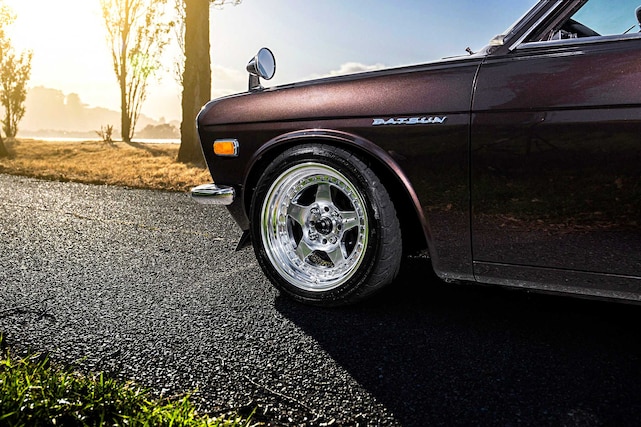 Since almost everything had been sloppily sprayed, Joe took a major risk by not knowing how bad the exterior would be underneath. Fortunately, Image Auto Body was more than happy to take care of that end of the build, and after a complete bare metal strip Joe was stunned to discover the body was fairly clean for being so ancient. With only a small piece of rust over the windshield and a smidge along the bottom of the doors, filler was minimal and Joe's gamble suddenly seemed like it had paid off.

Every door and cut of glass was removed for cleanup or replacement on this wagon, and once pieced back together the lower door moldings were selected as the only component of the exterior that needed to be removed. In their place were the additions of a duo of fender mirrors and a chin spoiler out front, the only notable cosmetic bolt-ons to the 510. Regarding the color, Joe's wife was actually the one who picked out the Mini Cooper "Hot Chocolate" brown theme, which coincidentally had just enough metallic in it to show off the Image Auto Body accentuations. Completed, you get a homage to the clean Datsun lines of yesteryear, giving just reason for the lack of exterior mods on this wagon.

Although Joe had previously wanted to keep a stock motor up front, witnessing the decrepit KA hemorrhaging in pain had left him convinced an SR upgrade was the only option. But instead of going with the renowned, Joe skipped the SR20DET in favor of an extremely obscure S15 SR20DE Autech motor. The move to this powerplant may have sacrificed 10 puny ponies, but in exchange offered a naturally aspirated alternative that had zero turbo fitment, expense, heat, or reliability issues. 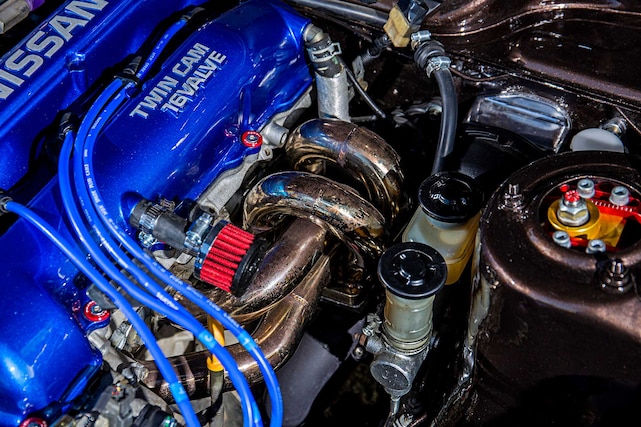 Meanwhile, everything on the interior was getting touched as well. After looking around at other Datsun builds, it had become apparent that almost everyone was running all black interiors, so the obvious option was to sport a tan/brown combo. Take note of the subtle additions like the slick shift boot and emboldened Datsun logo on the rear seat. There's a ton of OEM love to be had here, and Joe's dedication to keeping things old school even includes a fully functional Datsun 8-track in its stock location, because Roy Orbison demands that shit.

Up until this point, most of the challenges Joe had faced revolved around the simple task of sourcing replacement pieces. The car hadn't come with shit for parts, and although the interior had both seats and door cards in place, save for the driver side, every other door panel was devoid of equipment. No window roll handles, no ashtrays, no door popper handles, nada.

While '72 Datsun 510 wagon aftermarket door cards are plentiful and inexpensive, keeping the interior as stock as possible takes precedence. This meant contacting Ray over at Garage Autohero to source the majority of the impossible-to-find 510 components, a move that ultimately pushed the cabin to a point where it could be showcased at its first meet.

Now that it's close to completion, Joe says that future goals and aspirations include a custom exhaust manifold, along with a shortened Ford 8.8 rear end, complete with fresh gearing and a limited slip to match the SR's six-speed. There also are plans to install a rear Techno Toy four-link setup and disc conversion, the same one that Chris Forsberg debuted at SEMA '17. With the rear end done, the goal would be to see Joe do his damnedest to utilize the wagon and hit some shows. 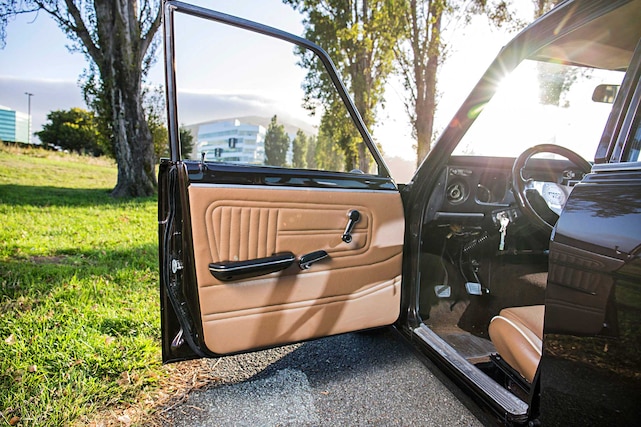 One of these events would be the highly revered Japanese Classic Car Show (JCCS) in Long Beach. With so many resplendent builds and helpful people from the Datsun community gathering in one place, Joe says that getting the choco wagon out in the open and into befitting company sounds like a solid plan on every front.

Sadly, Joe admits that up until now he hasn't driven the wagon as much as he would like, and thus far it has only attended one event. When pressed, Joe sheepishly admits that his primary reason for not driving the car has little to do with the dangers of the open road, but more to do with the vehicle's Spartan pedigree. But familiarity breeds comfort, and nowadays the beer delivery badass commutes to and from work in his little brown wagon every Friday, before taking the wifey out to dinner in it later that night. Joe has also gotten in the habit of taking his Datsun out on the occasional run to the store for things like, you guessed it: hot chocolate. After all, aren't enjoyable grocery runs what this vehicle was designed to tackle in the first place? 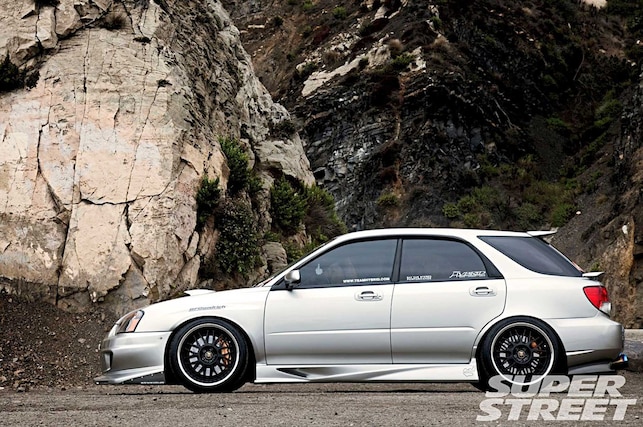 Wagons seem to be Joe's thing, not just 'cause they're different but because they're great modes of transportation, especially when he was looking to find a car to take his dog from place to place. The '05 WRX wagon featured in March '11 was quite the dog hauler with Voltex aero, Work VS-XX wheels, STI brakes, and Stance suspension. We don't think he'll still be throwing his dog in the Datsun, judging by how mint it is now... 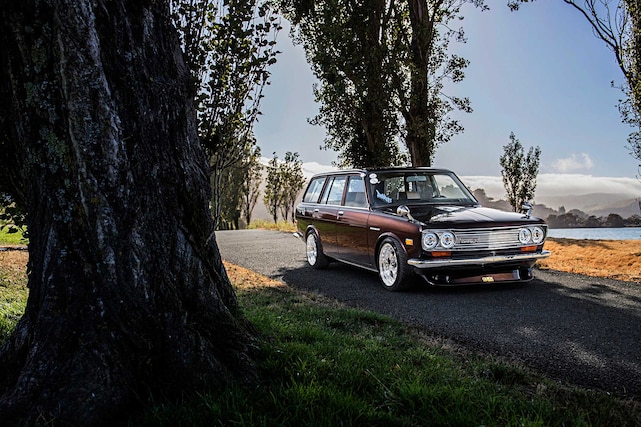 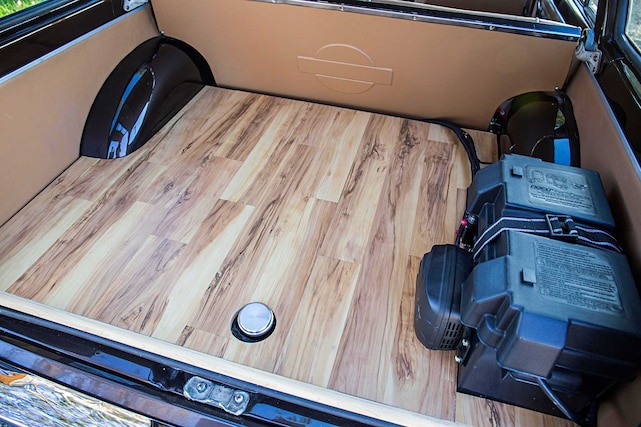 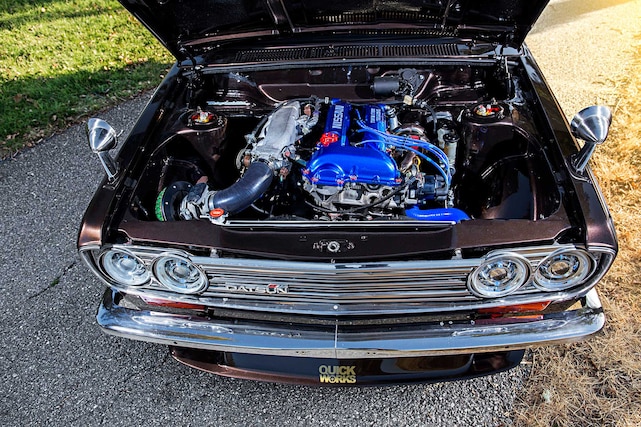 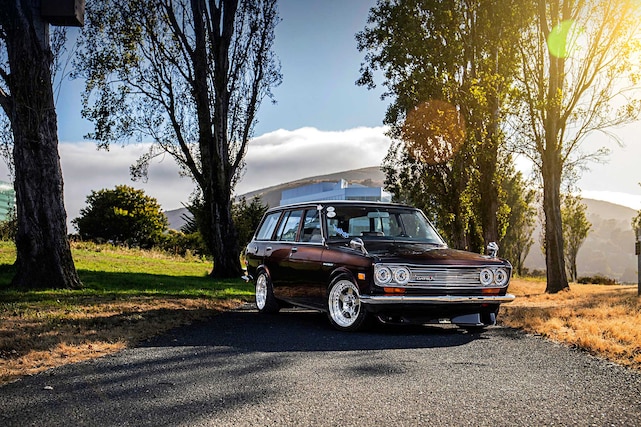