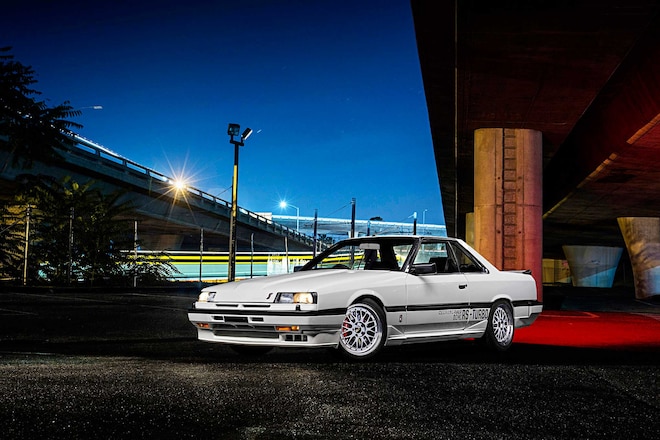 When we think Skyline, we either think of the hakosuka or kenmeri models, with their potent twin-cam inline-6s, or the "Godzilla" generation with two turbos, four-driven wheels, and who knows how many horses. GT-Rs are top of mind, but Nissan built lots of Skylines between '73 and '89. A prime example is this '84 Nissan Skyline (DR30) 2000 RS-X Turbo. The DR30 generation used Japan's first four-valve-per-cylinder four-cylinder engine, the FJ20E, starting in '81; the 190hp turbo version arrived mid-'83—then the most powerful production car engine in Japan. But the DR30's legend was cemented by Nissan's efforts in FIA Group 5 racing, known in Japan as the Super Silhouette series. Rules demanded Group 5 racers maintain stock hood, roof, and doors; the rest were unlimited. Flared fenders, chin spoilers, trunk-mounted wings, and a 2.0-liter turbo engine good for 570 horses: Formula 1 levels of power in a package that weighed little less than a street-stock version. Skyline Silhouette debuted in '82, driven by Masahiro Hasemi—he won two races that year, and five more in '83. The Silhouette look also inspired a generation of bosozoku. The signature flares, air dams, wings, paint, exhaust, and wheel/tire combinations are legendary, though street-driven Skylines did without. 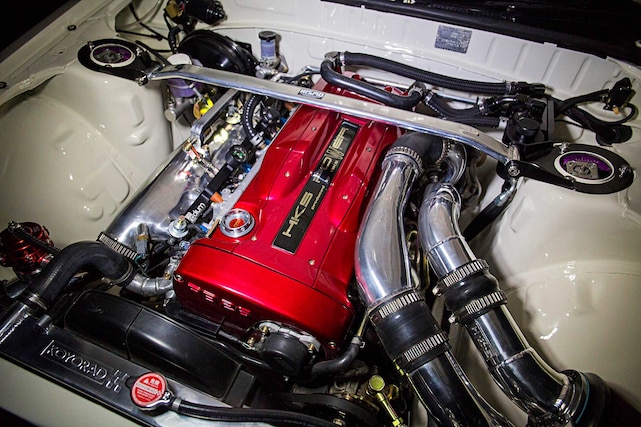 In '84, the DR30 received a grille-less face-lift featuring a new hood, slimmer headlights, and a new front bumper; this version was known as tekkamen (or "Iron Mask") due to its grim, no-nonsense face. It was one of these, a tekkamen 2000 RS-X Turbo, that Eric Straw found languishing on Craigslist in Spokane, Washington, in '14. A lifelong Nissan fan, Eric built countless SR20-powered 510s and Datsun Roadsters (as a hobby, not a profession) over nearly 20 years; he learned at the feet of Michael Spreadbury, whose shop Spriso Motorsports is a Pacific Northwest hub for Nissan SR20 activity. Over time, Eric has developed a recipe for his cars: make it look stock (give or take bigger rollers), make it as reliable as death and taxes with a modern driveline, make it fun and easy to drive on the street, and make it comfortable to sit in. (Eric is 6 ft. 3 in. tall; 510s and Roadsters are a little tight.) A DR30 ticked all the boxes for him, and he jumped on the first (engineless, but otherwise complete) example he found—400 miles away. Bringing it back to look factory stock was tougher than anticipated, as the body was riddled with rust and poor repair. After towing it home, "I found it had lots of rust in the floor, rockers, A-pillars, firewall, cowl, and tailpanel." A soda-blast strip to bare metal revealed all. Eric sourced Infiniti M30 parts—mostly the A-pillars and the floor structure—and fabricated the rest. It's the chassis—the least visible part of the car—that has had the most work. The front subframe was replaced with an R33 GTS-T piece ("I have a chassis table, and I just cut it up and made it fit," Eric said), both for parts swapability (including some choice Silvia steering components) and for much needed additional strength. An Infiniti M30 floor section helped connect the front and rear subframes. "Without a B-pillar, the DR30 is really a flimsy car," Eric states. Filling the interior with a 'cage would kill the sleeper vibe. 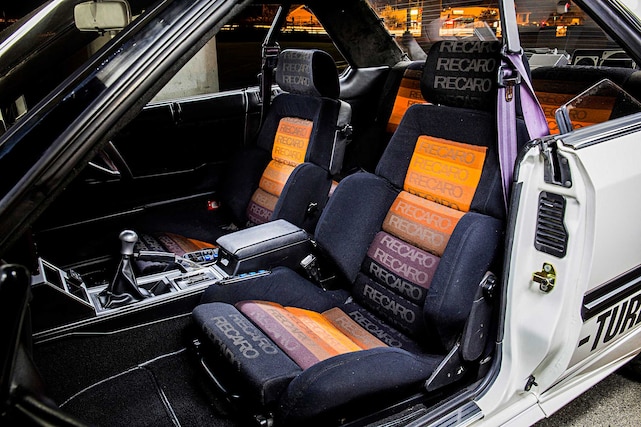 The stiffer frame makes sense when you see that Eric chose an R34 GT-R RB26DETT for power. It currently makes 532 hp to the rear wheels. That's right; this street-legal tekkamen Skyline has about as much power as an '80s Super Silhouette Skyline racer. "With another controller, it ran 460 hp; we were running out of fuel and air, we couldn't control the boost, and the ceramic turbos were fragile. We changed to a pair of GT2860RS turbos and Haltech engine management, and we're at 18 pounds of boost, although it's good for 20. Boost comes alive around 4,200 rpm." With the reinforced frame, with the oversized wheels and tires, with the front diff excised from the oil pan, and with the notoriously heavy iron-block RB26DETT replacing the original Four, this DR30 weighs in at just 3,032 pounds. 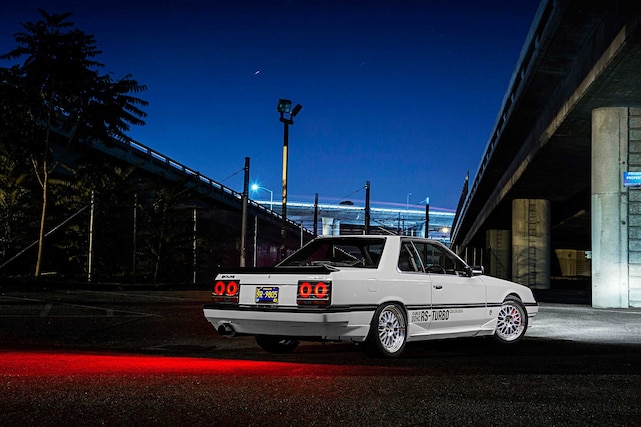 That's about 5.7 pounds per horsepower. And yet the style—crisp origami folds in clean factory Nissan white—somehow leaves onlookers confused as to its intentions. "A lot of people don't understand it. Some think it's R31, or they think it's stock. I'm not a flare or wheel guy; I just want it to be subtle, as if Nissan would have done it. It's exactly what I want it to be." In the States, a generation of Western Skyline enthusiasts is so swept up in GT-Rs that it won't look beyond. 1980s Skylines were never a secret in Japan, though, and builds as clean as Eric Straw's tekkamen show why the DR30 should be embraced by a wider audience.

The many generations of Nissan Skyline have been given nicknames in Japan, frequently revolving around their TV and magazine ad campaigns. Recall the Kenmeri Skyline of '72-'77, named for a young couple discovering the good life behind the wheel; also recall the "Japan" Skyline, as if they'd be from anywhere else, sold from '77-'81. Starting in late 1981, we arrive at the DR30 Skyline—the Newman Skyline, named for the late actor and all-around car enthusiast Paul Newman.

The TV commercials are all over YouTube. Here's Newman at Daytona, opening up his red 2000RS Turbo on the high banks. "Terrific," he says, with the sort of unexcited tone usually reserved for your spouse when she surprises you with Kenny G tickets. Here are Paul Newman and his car in New York City—a Skyline against the city skyline, you see. Here's that handsome so-and-so hammering the Super Silhouette around the track. Here he is driving back from dinner in his new white Iron Mask coupe, with someone who is pretty clearly not Joanne Woodward riding shotgun.

Why Paul Newman? Well, recall that decades before he was the voice of Doc Hudson in the first Pixar CARS movie, Newman drove Datsuns for Bob Sharp; the combination of brand loyalty and Hollywood star power made Newman the obvious choice to plug the car that was about to go racing in the international Group 5/Super Silhouette racing series.

Later in the DR30's run, the actor's name graced a special-edition model. Unlike the hotties Newman drove in the TV spots, this one was a top-of-the-line GT-ES with the L20ET turbo Six, high-tech options like Drive Guide in-car navigation, cockpit-adjustable suspension, and a Newman-signature badge for the trunklid. 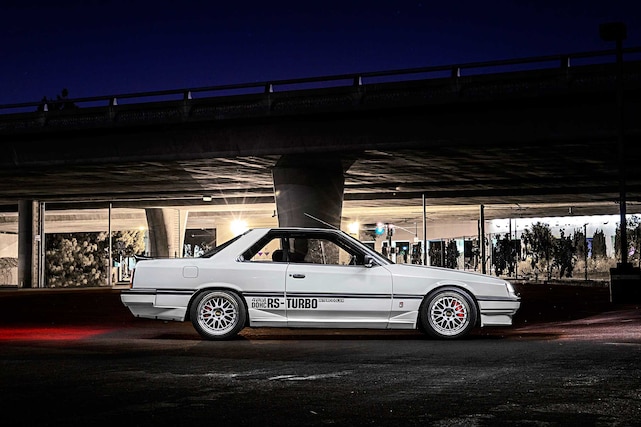 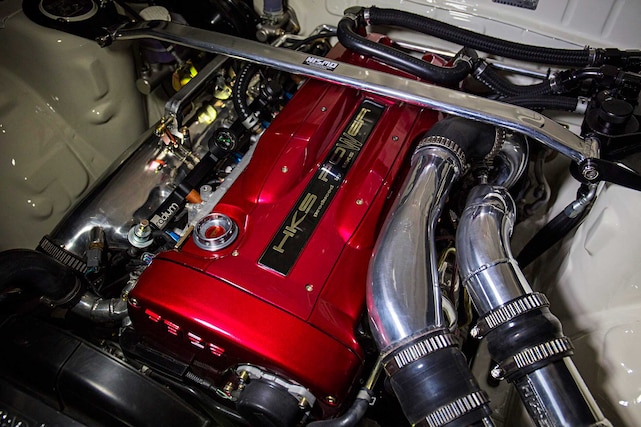 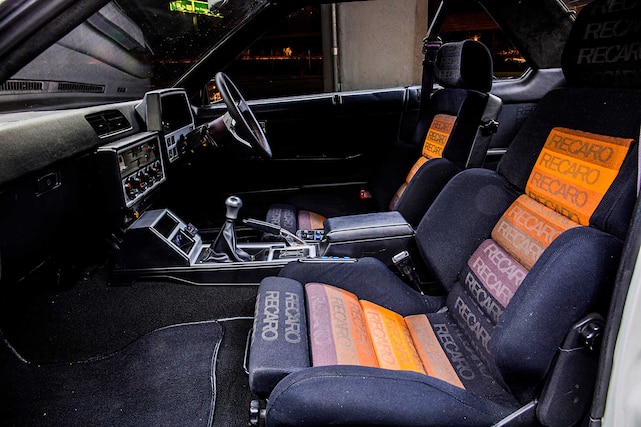 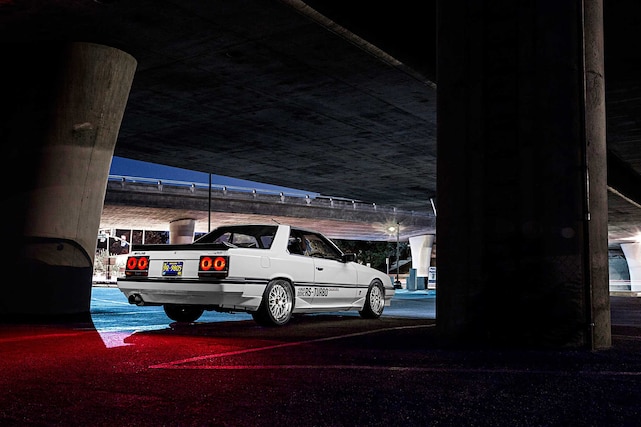