Behind the wheel of a Stage III+ performer 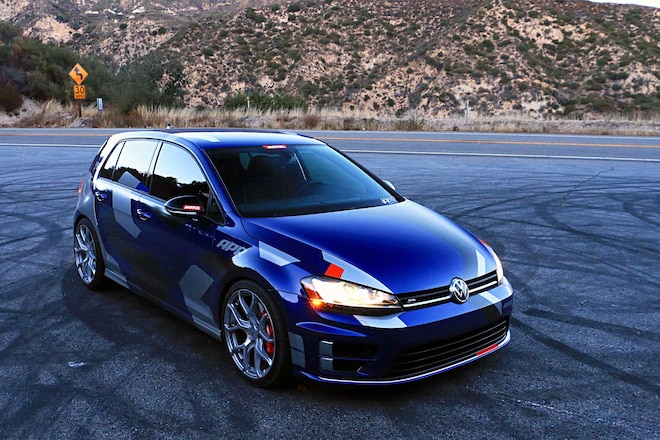 No matter how well-balanced the formula, there will always be someone out there that's determined to improve upon it. But "better" is often in the eye of the beholder, and where that individual's priorities are focused make that a highly subjective matter. So considering its performance, stealthy aesthetic, and overall refinement, the current generation Volkswagen Golf R is an admirably well-rounded package right out of the box, and that makes improving upon the template a perilous endeavor. 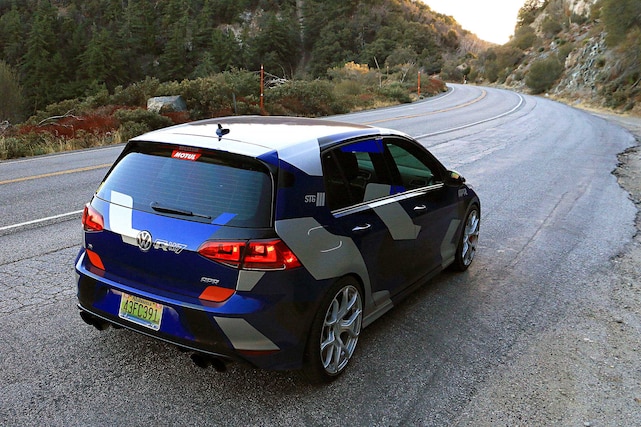 But for APR, that's just a solid canvas to start from. Their Stage III+ "Gonzo" package leverages the VW's stout drivetrain, well-balanced chassis and all-wheel drive grip to take the Golf R's capability to a wholly different level, a realm where this car can lay waste to machines from the likes of AMG, M Division, and other high-buck performance marques.

Getting the Golf R to that level was no minor task though, and the alterations APR made to bring this hot hatch up to speed are rife with potential pitfalls. Anxious to see how it all came together for ourselves, we grabbed the keys and headed to the winding mountain roads of the Angeles National Forest by way of the pock-marked streets of northeast Los Angeles to put this hopped up machine through its paces, in both the context of outright performance as well as everyday use.

Serving as APR's most potent collection of components for the MK7 Golf R, the Stage III+ package is not for the meek of heart or the light of wallet. The $17,835 price of entry (before installation) gets you some pretty serious hardware though, including APR's balanced and blueprinted 2.0-liter EA888 Gen 3 crate engine. The longblock is purpose-built to handle the abuse that the APR Stage III+ turbo kit can deliver, a twin-scroll 71mm Borg Warner unit with a lightweight turbine wheel made from titanium aluminide. 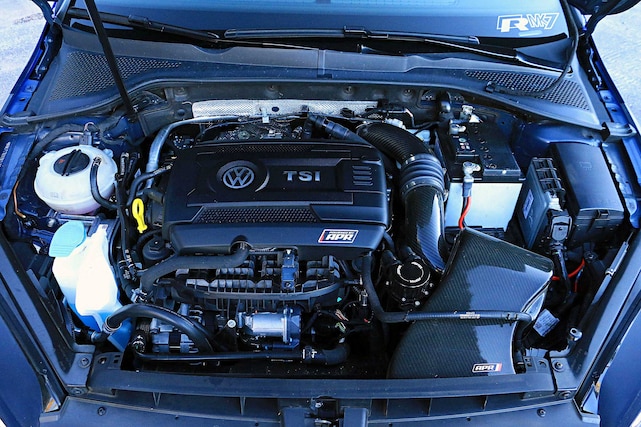 Combined with APR's intercooler, carbon fiber air intake, catch can, cat-back exhaust system, and software upgrades for both the ECU and the DSG, the result is 470 horsepower and 425 pound-feet of torque at the wheels on 91 octane gas, or as much as 536 hp and 475 lb-ft on 104 octane race fuel. That healthy dose of extra oomph propels the car to 60 mph in 3.4 seconds on the way to a 10.8 second quarter mile, and APR says that a Stage III+ prepped car is up to fifteen seconds quicker to 140 mph from a standstill versus a stock Golf R.

APR wisely chose to include some chassis upgrades in the package too, including six-piston Brembo monoblock calipers with two-piece vented discs and stainless steel brake lines, lowering springs, and a larger adjustable rear sway bar. Also included as part of the deal are APR's flow-formed 19x8.5" wheels, which are wrapped in Michelin Pilot Sport 4S rubber here. 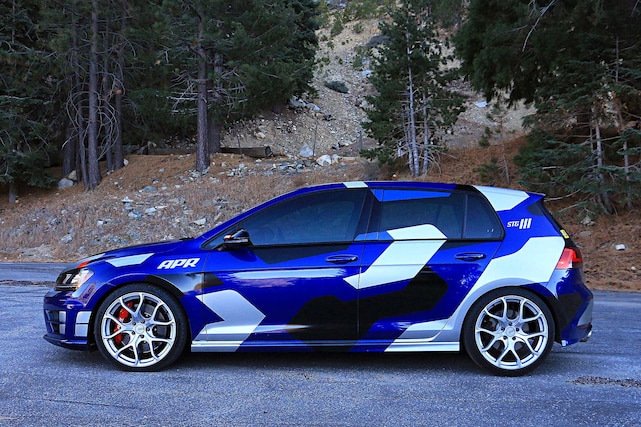 Graphics package aside, there's very little in the way of exterior visual cues which hint at the ferocity of the Stage III+ package. Sure, the aftermarket wheels and larger quad-tipped exhaust system hint at potential beyond factory-stock performance, but they could also be easily dismissed as typical "Day Two" modifications. It's a similar story inside as well — aside from a sticker on the passenger side of the dash, this Golf R's interior looks the same as it did when it rolled out of the Wolfsburg factory, and there isn't a single pillar gauge to be found that might clue in the guy in the lane next to you. 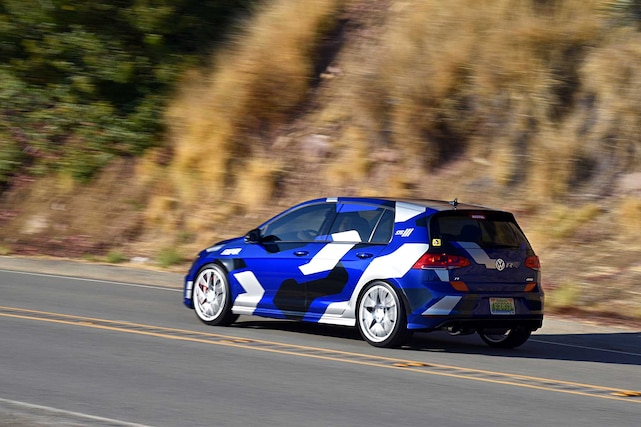 But a press of the ignition button brings the car to life with an authoritative boom that suggests that there might be more to this car than initially meets the eye. APR's exhaust system is fairly bassy and tends to dominate the conversation when Race mode is set and the transmission keeps itself in lower gears. Switching over to Normal mode solves that issue though, as the exhaust volume settles down to near-stock levels in higher gears for minimal annoyance during long freeway hauls.

Aside from the added sonic theatrics provided by the cat-back and the distinctive blow-off valve APR has outfitted to the car, around town the powertrain in Stage III+ form is as docile as you'd want it to be during a commute, with the APR-built engine as happy to tolerate stop and go traffic as the original motor is, while the DSG swaps cogs with the same near-seamlessness as it does in a factory-stock machine. 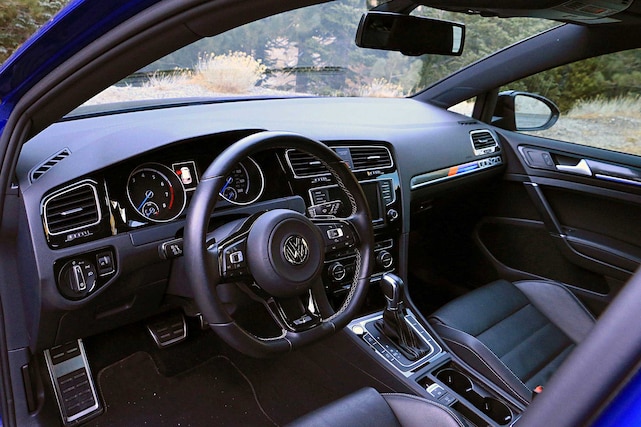 The uprated springs and sway bar do result in a ride that's noticeably firmer around town, but it's far from objectionable. The suspension setup feels more track-oriented though — at lower speeds, technical maneuvers over less-than-perfect pavement require a bit more work from the driver simply by virtue of the car's tendency to deflect over bumps rather than absorb them. With the non-adjustable dampers outfitted to our tester, it makes sense that this suspension would be tuned to perform its best at road course speeds rather than the pace required on the congested streets of LA.

Once we were out of traffic and up into the hills it was clear we'd found where the Stage III+ package was in its element, though. With the combination of a small displacement engine and a big turbocharger we expected the power to come on fairly late and abruptly, but the APR package surprised us here as well. While the boost does spool up a bit later in the rev range, the sensation of lag is fairly minimal with power building progressively from about 3,500 revs and showing no signs of significant drop-off all the way to the 6,500 rpm redline. 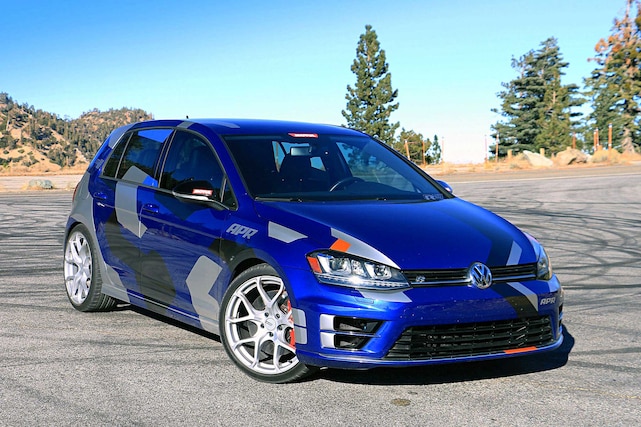 To get that 3.4 second sprint to 60 miles per hour you'll definitely want to use launch control, though — this motor needs to be on boost the moment you leave the line, perhaps even more so than the stock Golf R does. That said, the car is fast. Ten second quarter mile times put this Golf R in supercar territory and the APR Stage III+ package delivers the power predictably and in a way that feels manageable, both in a straight line and when getting on the power out of a slow corner.

As you'd expect, APR is happy to sell you the components from the Stage III+ package a la carte, and that's likely to be of interest to enthusiasts who've already honed in on their preferred chassis setup. A caveat worth noting is that while this package is not smog legal in California, APR does have kits in development for CARB certification, and their Stage I ECU tune is said to provide some solid gains with no other modifications while remaining 50-state legal. 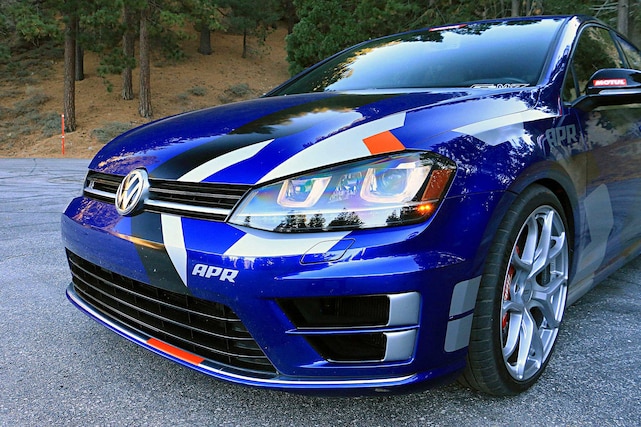 But for those with the means to utilize it, APR's Stage III+ package delivers. Without the race-inspired livery, it's easy to imagine this Golf R making a habit of shutting down unsuspecting muscle cars and exotics, all while handling the duties of day-to-day driving without the compromises typically found on cars modified to this level.

Perhaps rather than enhancing Volkswagen's Golf R template, the APR Stage III+ package has simply created a new one.