A J-series-swapped, twin-turbo S2000 poised for the drag strip 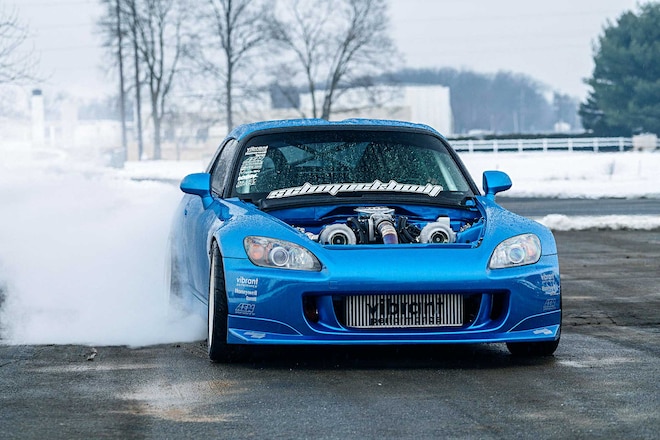 Jason Schmuck didn't spend three years of his life cutting, welding, and fabricating his way toward what he envisioned as the last word on S2000s for it to pull off parking lot poses at car shows. The J-series engine swap, the pair of Garrett turbos, and the Ford rear end all meant that 1,320 feet worth of forward motion was the car's promise. That, and to help catapult his fabrication business into a full-time reality and become the most talked about build of last year's PRI show. 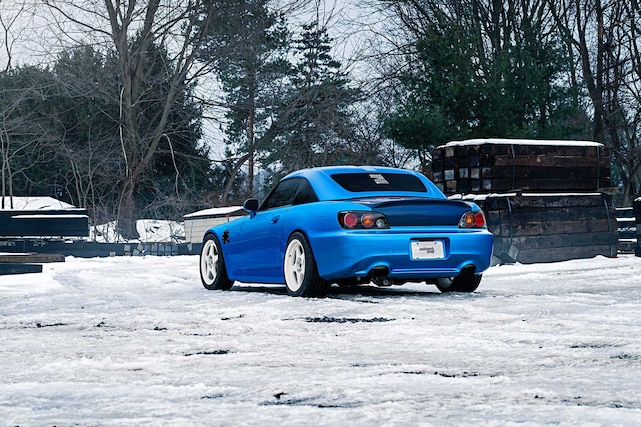 Right about now you might be wondering about that whole part of Jason not building his AP2 for things like car shows and clipboard-bearing judges. You also might be wondering what exactly is the PRI show. PRI (Performance Racing Industry) is like SEMA, only without companies peddling things like circus-colored brake caliper covers and glow-in-the-dark anything. PRI is about going fast, and during three days each December in Indianapolis, it's where race cars are put in the spotlight and race car parts purveyors from around the world convene.

So far, none of this has anything at all to do with Jason or that S2000 of his. His buying that AP2 four years ago, slapping a set of Enkeis on it, and turbocharging it was about as innocuous as the time you put a put a set of Razo pedal covers and a shift knob on your Eclipse. It was, however, the beginning of something big for him. "I [knew] they were great platforms to leave mostly stock and turbo," Jason says about the S2000. "My goal was to have a mostly stock S2000 to daily [drive] and have fun with." 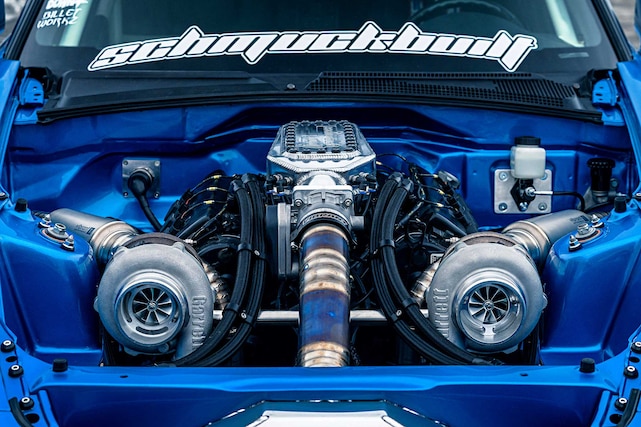 But leaving anything mostly stock is for wusses, and since Jason isn't a wuss, he went on to squeeze 600 hp out of the roadster's F-series of which was, internally, completely stock. An oil pump gear that blew itself to smithereens did what you'd think it would, which led to an 800hp rebuild and, ultimately, an 800hp pile of rocks. "I've had some pretty bad luck with the F-series engines so far," Jason says of the obvious.

It's bad luck that led Jason to Honda's 60-degree V-6 engines and figuring out how to get one to fit, run, and do so reliably, and is precisely where the raw deal ended for him. J-series life wasn't all roses, though. "There's not much information out there for the swap," he says, which means he had to do things the old-fashioned way, through his own ingenuity and fabrication prowess—'both of which led to his business, Schmuck Built, starting to grow right around the same time. You think plopping any old J32 into the S2000's seemingly roomy engine bay is the easy part and you're mostly right. But go and try to hook up the sort of things that make it run and you'll see why the Internet's devoid of any "10-step plans for swapping a J-series into an S2K." 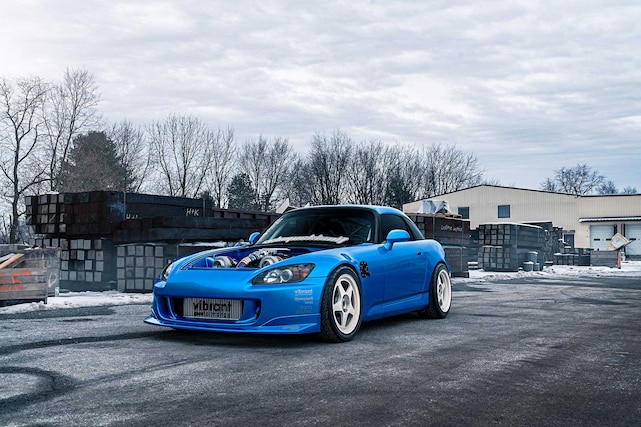 There are a couple of reasons for this. First, swap-seeking S2000 owners are few, but more importantly, that J-series was designed for something with its transmission up front. "[This] puts the whole cooling system off the back, transmission side of the engine," Jason says. "I had to make a lot of custom, one-off things for the cooling system in order to get everything [to] fit and [remain] hidden." Like the thermostat and water pump that had to be located inconspicuously and the pair of radiators positioned out back.

That's right. Two radiators, both out back. Look closely at Jason's AP2 and you'll see that pairs prevail, and the theme goes beyond the two Garrett turbos. "This car has two of everything," Jason says about symmetry and the numerical motif's place within the build. "The goal was to keep everything 100-percent symmetrical." 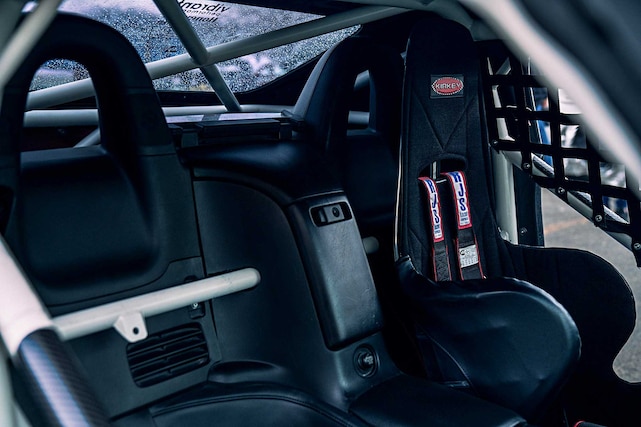 But symmetry won't make you faster. For that, Jason turned to two Garrett GTX3576 turbos that push air through a throttle body nabbed from a Dodge Charger and an intake manifold made from scratch that doesn't sacrifice that original hood. Power's transmitted through the S2000's original gearbox but passes through an XPerformance 8.8-inch Ford rear end and axles made to fit before making its way to the Regamasters.

"When I bought the car, it was driven daily, [and] up until now the car has been apart more than it's been together," Jason says. "It's hard to find time to work on personal cars while keeping up with the business." Despite the fact that it hasn't seen the race track yet, the S2000 remains a showcase for Schmuck Built's capabilities and, according to Jason, it's only a matter of time before it "makes its transition into a full-blown race car."

But why the J-series? 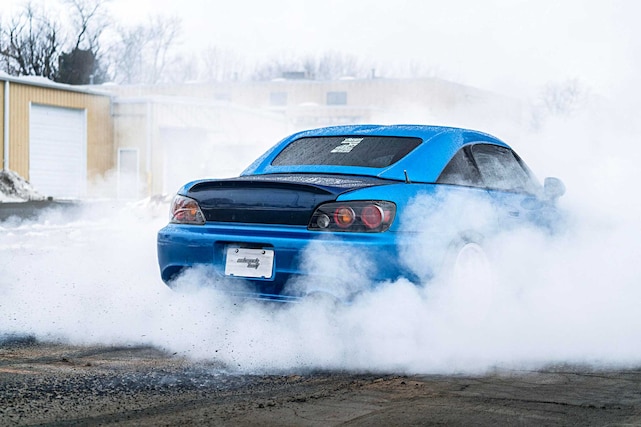 There are few better bargains for impending engine swappers than Honda's 60-degree V6s. Sourced from models dating back to '97, the J-series can be yanked from nearly 15 different Hondas, the most popular of which are the Odyssey, Ridgeline, Pilot, TL, and TSX, and with displacements as high as 3.7L, although later-model, drive-by-wire variants can be a bit more trouble for S2000's bearing cable-actuated throttles. But all you care about are the specs, like the 240 hp you can have from a $500 long-block. Power varies a whole lot between platforms—'as much as 310 hp in some cases—'with a combination of either VTEC or i-VTEC available for every single one. But don't confuse any of these with Honda's V-6 predecessor, the C-series. Their 90-degree architecture makes them far too cumbersome for any modern Honda engine bay and technologically inferior anyways. 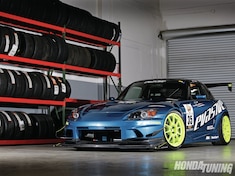 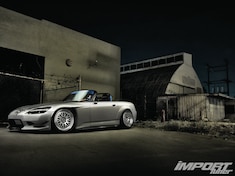 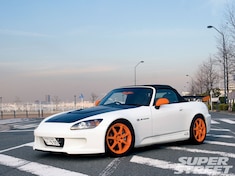 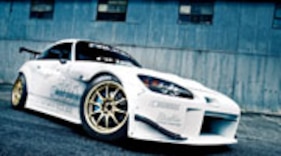 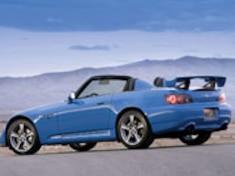