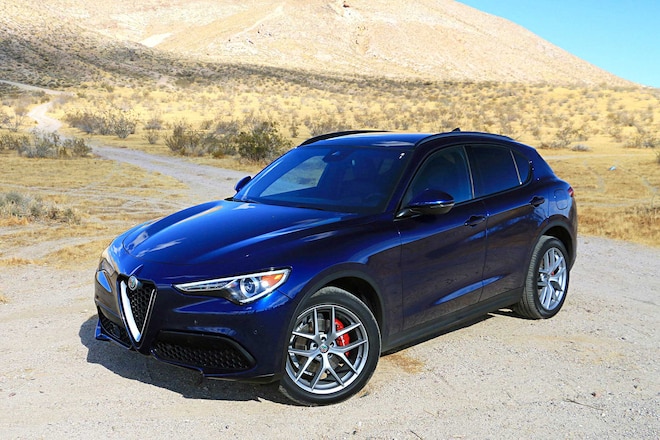 Alfa Romeo's return to the US market was something of a covert operation. Starting with a very limited quantity of 8C Competiziones that were sent across the Atlantic nearly a decade ago, the brand has slowly made its way back into the fold through enthusiast buyers. Each model introduced thereafter would appeal to a wider—yet still fairly niche—audience, with the 4C bringing a the prospect of a mid-engine Italian sports car into a price range that put it alongside Porsche Cayman, and the Giulia gunning for the hearts and minds of BMW 3-Series and Mercedes C-Class sport sedan buyers. 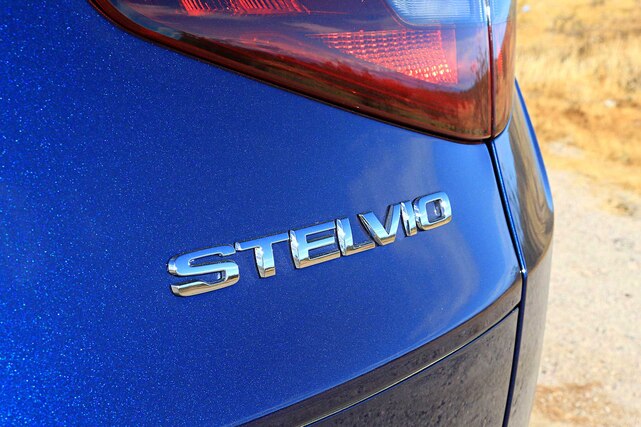 But Alfa Romeo knew that if they wanted to have a lasting tenancy back in the 'States, they'd need a model that could appeal to a bigger audience. With crossovers now leading the industry in terms of annual sales, the Stelvio is the Alfa Romeo that will largely determine the company's fate in North America. Ultimately it's this machine that will serve as the modern face of Alfa Romeo for the majority of American motorists, and luring buyers away from more firmly established options is no small task. It's a vehicle they really need to get right.

It would need to be distinctive yet accessible, sporty but not punishing, and functional without being boring. So, can Alfa accomplish such a feat with the Stelvio? We spent some time with the new crossover in Ti Sport guise on the back roads, city streets, and highways outside of Rosamond, California to find out.

The Anatomy of an Italian Crossover

Located in the Sondrio province of northern Italy, the Stelvio Pass is considered to be one of the most incredible driving roads anywhere in the world, a winding ribbon of tarmac carved into the Ortler Alps that stretches more than 13 miles from start to finish. 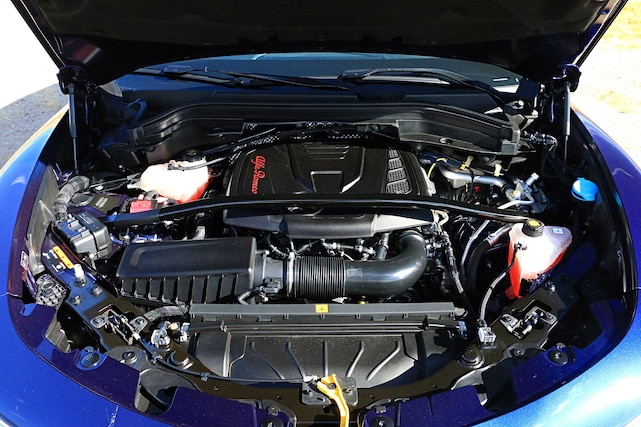 Naming a high-riding sport-utility vehicle after a road like this might seem ill-conceived, but the Alfa has some compelling talking points going for it, like near-perfect 50/50 weight distribution, a rear-biased all-wheel drive system, and brand reputation for sport-oriented driving. And to that end, the Stelvio's resemblance to a lifted Giulia is more than skin deep. The two vehicles share both an 111-inch wheelbase as well as with the fundamental elements of their double-wishbone front and Alfa Link rear suspension systems.

The Stelvio Ti is outfitted similarly to the Giulia Ti in terms of motivation as well, as a 2.0-liter turbocharged four cylinder engine that generates 280 horsepower and 306 pound-feet of torque is on hand here, and routes its grunt through a ZF 8-speed automatic gearbox. All four corners put the power to the pavement in the Stelvio though, and it gets this 4000-pound machine to 60 miles per hour from a standstill in an impressive 5.4 seconds on its way to a 144 mph top speed. 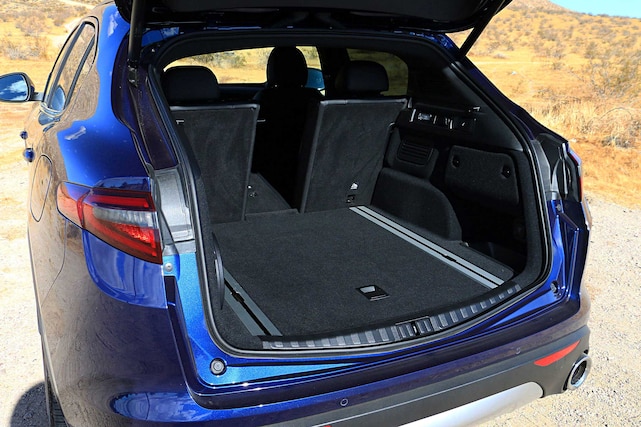 There's also a fast 12.0:1 steering ratio and four-piston Brembo brakes installed up front as standard, while a pair of lovely column-mounted paddle shifters are equipped to our tester as part of the Ti Sport package, which also includes a more aggressive suspension setup, unique 20-inch wheels, sport seats with power bolster adjustments, and an array of visual tweaks inside and out. 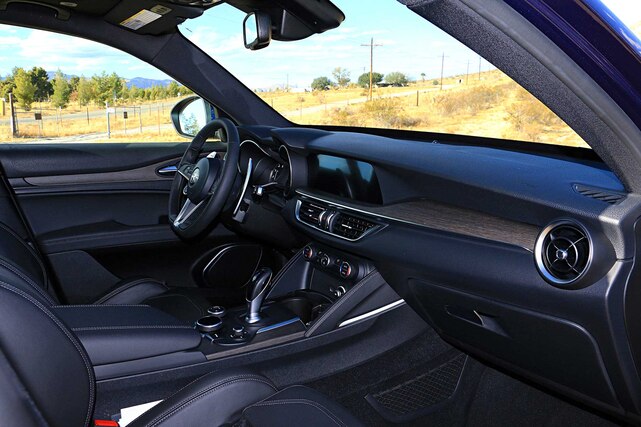 The Stelvio's interior will also look familiar to anyone that's already acquainted with the Giulia's cabin. A pair of analogue gauges for the tach and speedo flank a center LCD display, while the leather-wrapped, flat-bottomed steering wheel houses not only audio and Bluetooth controls but the start/stop button as well, the latter a design nod to Alfa's racing heritage.

A second widescreen display in the center stack is interfaced through an iDrive-style rotary knob and hard button setup on the center console, while the Stelvio's different drive modes are selected via the DNA knob adjacent to it.

Settling in at the helm of the Stelvio we noted an interesting mix of design elements, some of which add to the sense of the luxury and some that do not. While the overall presentation is graceful and conveys a sense of premium sportiness, there are sections that feel oddly austere. 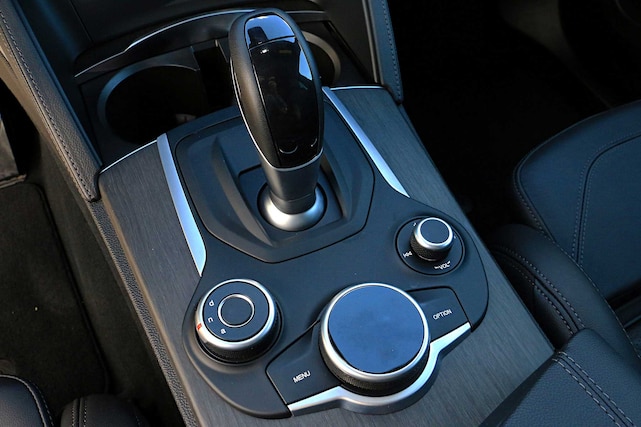 The center console is a particular sticking point, as it lacks any terrain management controls (since the Stelvio doesn't have any) and the plastics used have a slightly low-rent feel to them. The wide aspect ratio infotainment display doesn't do a lot to combat this either, as some elements feel half-baked. For example, it doesn't jive particularly well with the backup camera—instead of the rear view filling up the display, it's allocated to less than half the screen, and positioned as far from the driver's vision as possible. Certainly not a deal-breaker, but a genuine annoyance.

But once in motion the story improves. With the taut suspension and well-bolstered seats of the Sport package the Stelvio actually encourages driver engagement, a rare attribute in a crossover and a promise that wasn't betrayed when we switched over to manual shifting mode and dropped the hammer. Alfa's boosted two-liter mill has a surprising amount of personality, offering a pleasant growl that gets better as the revs go up.

The ZF gearbox proves to be a great pairing with the four cylinder power plant too, delivering quick, responsive shifts when commanded through the paddles and refined manners around town when left to its own devices. We noticed it's happiest in Dynamic mode, where the transmission is less eager to upshift into the higher gears that helped it achieve an EPA-rated 28 mpg on the highway.

But beyond straight-line capability, it's the Alfa's flat cornering and ample stopping power that make it a performance standout in the crossover realm. While the Stelvio Ti might lose a step to other performance-focused entries like the Porsche Macan S and Mercedes-AMG GLC43, the Stelvio's as-tested price of $54,090 undercuts those German offerings substantially. 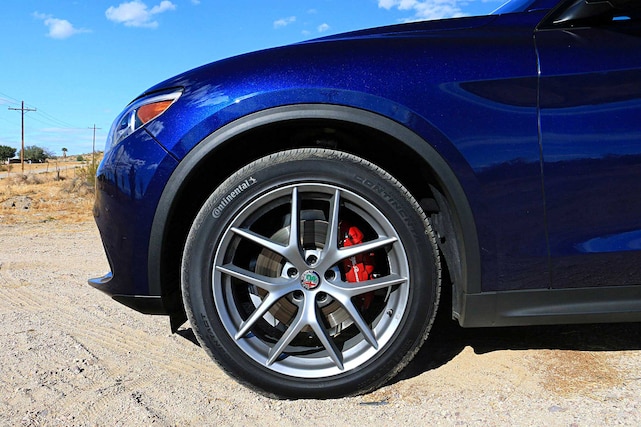 Although it's a performance-oriented machine, Alfa's engineers didn't lose sight of the fact that the Stelvio's primary mission will be managing the tasks of every day driving. There's plenty of interior space, even for taller occupants like your author, and 18.5 cubic feet of cargo space is available behind the rear seats. Folding those seats down expands the Stelvio's cargo capacity to 56.6 cubic feet.

And while the suspension keeps things flat when driven spiritedly, it doesn't punish the driver with a harsh ride around town. It's definitely firmer than a typical luxury vehicle setup, but there's a surprising level of compliance when faced with less-than-perfect pavement, and any perceived tradeoff here is well worth the trouble when you're provided the opportunity to open up the taps on a good section of tarmac. 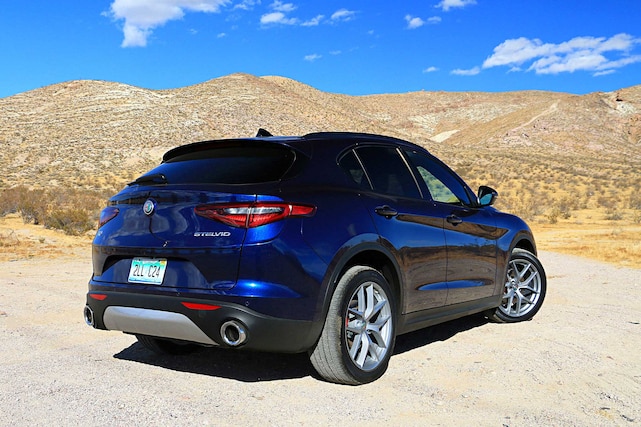 While imperfect, the Stelvio Ti shows a lot of promise as Alfa Romeo's initial foray into SUV territory. Enthusiasts looking for something that can hang with the most capable performers in the segment, like the Mercedes-AMG GLC63 S and Porsche Macan Turbo, will probably want to wait for the 505-horsepower Stelvio Quadrifoglio, which will go on sale next year with the added credibility of being the fastest SUV around the üurburgring—assuming another SUV doesn't top its 7 minute, 51.7-second lap time beforehand.

But for those who simply want a functional sport utility that's big on style and engaging enough to keep things interesting when the roads get lively, the Stelvio Ti might just be the break from the mundane they've been looking for. 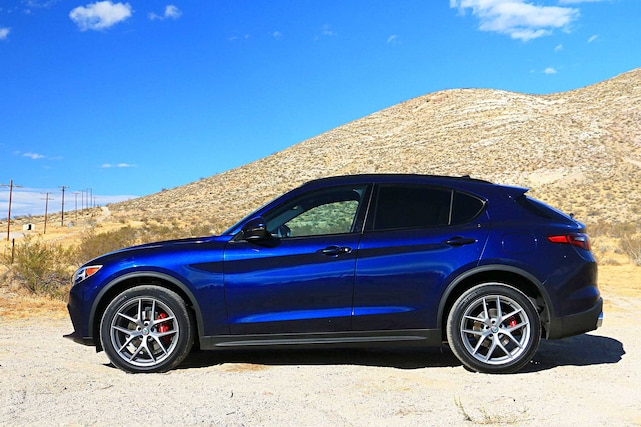