Cutting through the noise 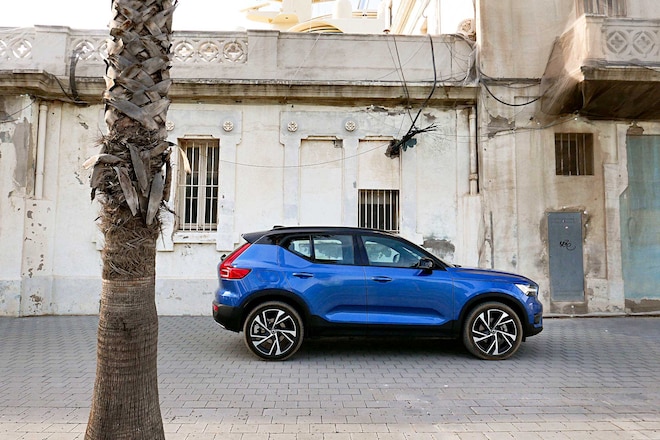 How many people purchase an SUV to stand out from the crowd? Is that even possible these days, what with seemingly every buyer turning their back on traditional sedans and coupes in favor of the crossover monolith that looms heavy over the entire automotive market? If you're Volvo, in any case, you're hoping that the answer to this question is '"Yes," because its newest family fare—the 2019 Volvo XC40—aims to distance itself not just from its luxury competition clogging the streets, but also its in-house predecessors. 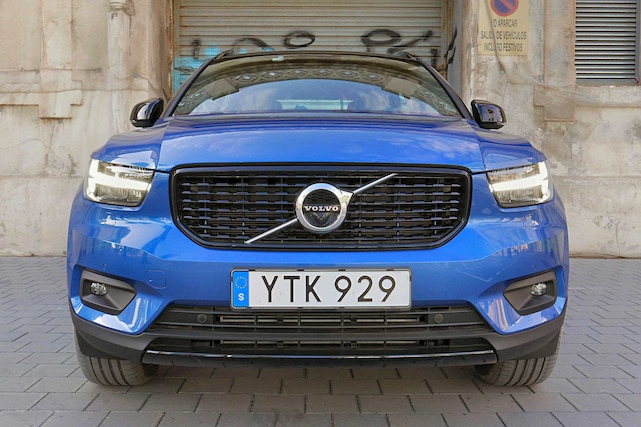 For all the success Volvo has enjoyed with the plus-size XC90 and the mid-range XC60, when it came time to tackle the entry-level, the brand's designers took one look at all they had previously accomplished and wiped it away with a stroke of the pen. Certainly the XC40 is recognizably a Volvo, especially when viewing its corporate grille head-on, but in profile and in detail this is a trucklet that pushes its style chips to the center of the table and then leans back, arms crossed, and dares BMW, Audi, and Mercedes-Benz to up the ante.

It's hard to imagine a more effective strategy for an automaker that has often found itself on the outside looking in at the rest of the Euro luxury players as they divide up the customer dollars flowing towards badges with substantially more cachet at the country club valet station. The Volvo XC40 can't compete on built-in brand equity, so it's done the next best thing: drawn every eye in the room and then followed through with an above-average package in a world where bland comfort is more the compact SUV norm. 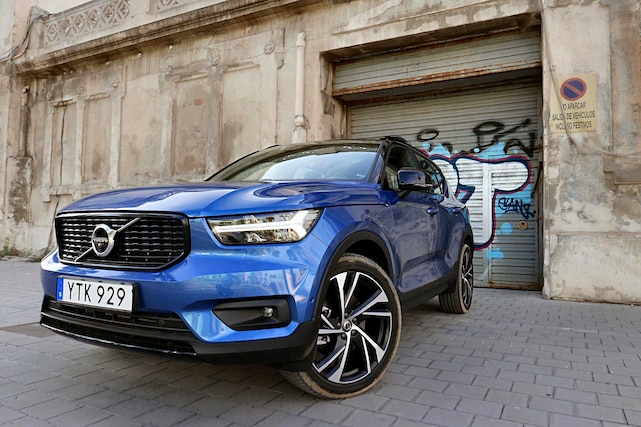 Catalonia's capital of Barcelona provided a bracing background for the collection of angles, cuts and curves that define the XC40's inviting profile. The newest interpretation of Volvo's design language set against the jaw-dropping modernism of Gaudi's architectural influence proved that fresh ideas never go out of style, especially when erstwhile competitors are content to fill big box parking lots with uninspired shapes destined to have you wandering towards the wrong vehicle at the end of your shopping day.

Once set in motion, the Volvo XC40 proves it can easily hold its own against competitors like the Audi Q3 and the BMW X1 in the vast majority of the driving situations its urban-oriented owners will find themselves in. With only top-trim T5 AWD R-Design models available to us for testing on the roads leading in and out of Barcelona's thriving metropolis, my experience was limited to the 248 horsepower version of the Drive-E turbocharged four-cylinder engine offered with the SUV (a T4 FWD tune rated at 185 ponies will become available later this year). 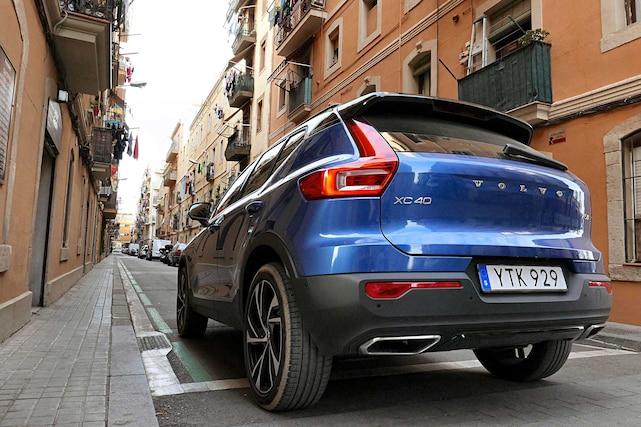 I'm not quite prepared to hand the XC40 a gold star for athleticism, but there's no question that its chassis and engine, in combination, add up to a quick and vibrant ride. Frequently tested by Spain's casual attitudes towards what constitutes two-lane traffic, and never flummoxed by the hills it had to climb on the outskirts of the city's wine country, the Volvo's turbocharged mill meted out its 258 lb-ft of torque with measured confidence by way of its eight-speed automatic transmission. Stay away from the just-for-show paddle shifters, select the 'Sport' drive mode, and you'll be able to preserve the illusion that a crossover can be sort of fun, at least in short bursts.

Sit back and enjoy the comfortably-sprung suspension in any of the Volvo's other vehicle settings and you'll come to a better understanding of what the compact hauler is all about. With compliant road manners, a healthy (although not class-leading) level of total cargo space, and a surprising number of hang-it-here hooks and hidden drawers and cubbies, the XC40 is able to buttress its intriguing looks with respectable levels of practicality. Even the cabin design walks its own path, maintaining the too-tall dimensions of Volvo's Sensus infotainment system but framing it with equally-vertical air vents that balance each other out at either end of its dashboard. 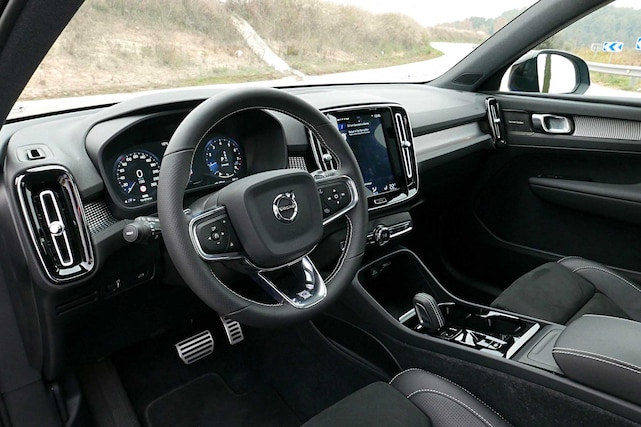 What will it cost you to park the all-new Volvo XC40 in your driveway? Roughly the same as any other entry-level premium SUV in its class, with a starting MSRP of $33,200 for the T4 FWD Momentum trim disappointing anyone hoping for a discount from this modestly-proportioned challenger. At the upper end of the spectrum, the all-wheel drive T5 R-Design model commands an ask of $37,700, but if you want to sample the full range of Volvo's advanced safety features, you'll have to ante up for the Premium package, which adds the semi-self driving Pilot Assist adaptive cruise control feature ($900), as well as the Vision package's parking assistance and blind spot monitoring systems ($1,100), and finally the Advanced package (360-degree top-down camera, $995). The animal-and-pedestrian detecting City Safety low-speed automatic braking feature and lane-keeping systems are included free of charge on all T5 models. 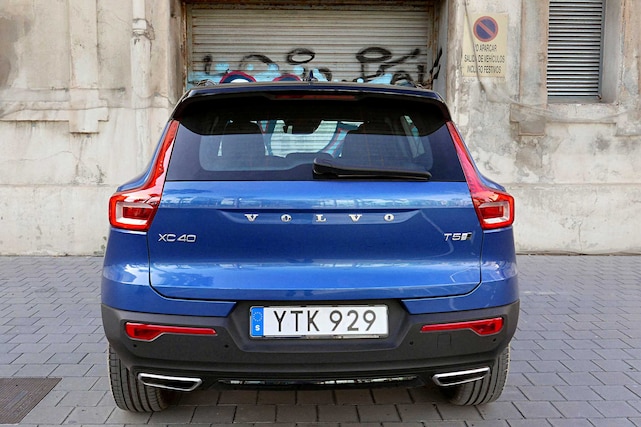 Volvo's stunning about-face from purveyor of safe, conservative commuters to the leading point on the styling spear deserves an exclamation mark like the XC40. It was smart to avoid downsizing the XC90's imposing grace and give the smaller 'ute a personality all of its own—especially given that so few shoppers think 'Volvo' when it's time to re-up on their next mall crawler. The road to premium respectability for the Scandinavian brand will be longer or shorter, depending on which of its steeds is tackling the terrain, but with the XC40, it's clear that Volvo has left the gate at the front of the pack. 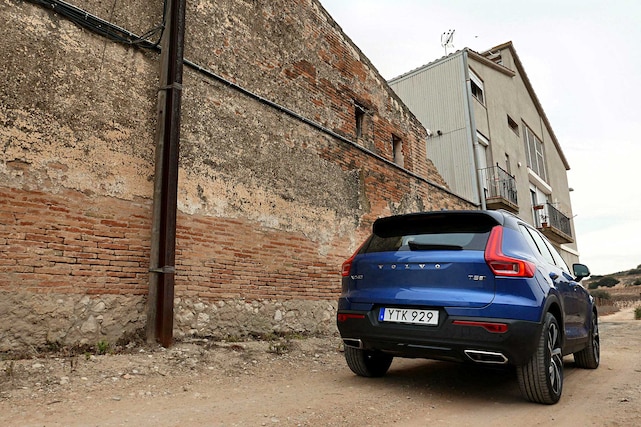