Behind the wheel of Dinan's latest creation 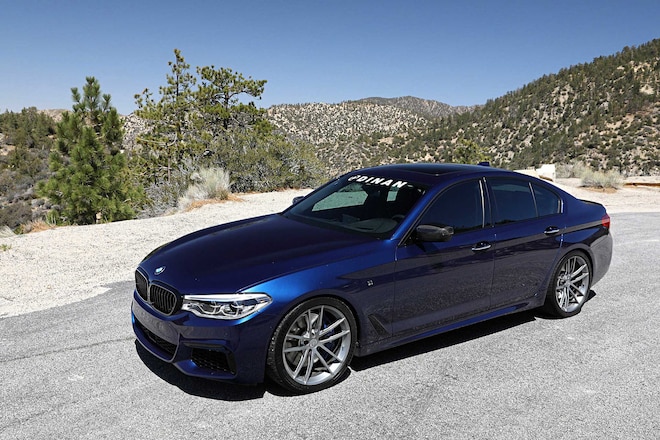 "As a BMW tuner and tuner of other European marques, we are dedicated to a single overriding objective: to develop the fastest, best handling, and most reliable street legal cars available anywhere," says Dinan's Nathan Fette. "Our goal is to make the driving experience even more exciting without sacrificing the refined handling, reliability or warranty coverage that owners of such vehicles can come to expect." 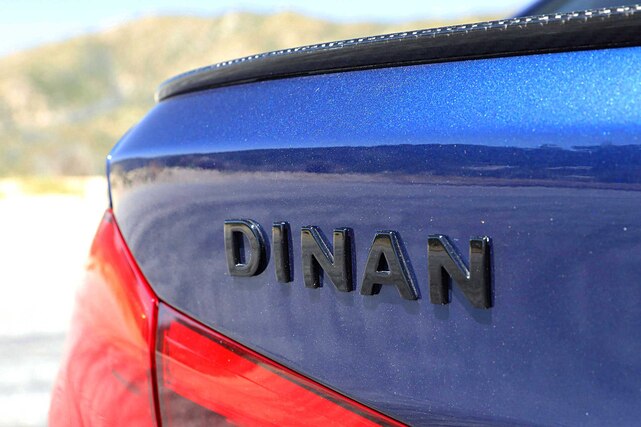 While some of that might come across as a bit of hyperbole, there's an important takeaway there, too: The emphasis on reliability and warranty coverage. Ultimately there are a lot of different routes owners can take to bolster their vehicle's performance, but whether or not it will impact the car's temperament is often a question that's only answered some time later.

Founded in 1979, Dinan has established itself as a standard-bearer in BMW tuning in the years since. Along with their street car development, the Opelika, Alabama, performance house has also served as a technical partner to BMW Motorsport in the now-defunct Rolex Grand-Am Daytona Prototype series, helping bring the team back-to-back championships and two overall wins at the 24 Hours of Daytona along the way.

With a pedigree like that, one might expect the 606 horsepower S1 M550i xDrive to be the F90 M5's alter ego, achieving similar capability through a slightly different formula. 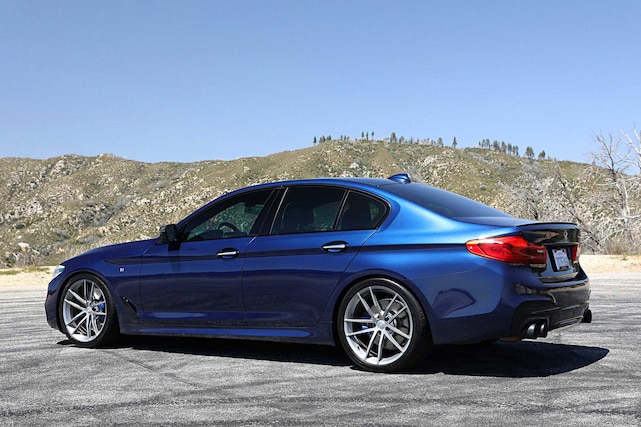 But there's an important distinction between the S1 M550i xDrive and the S2 M4 and S2 M2 we've tested in recent years: While Dinan started with a full-blooded M car when they went to work on the M2 and M4, the M550i is an M Performance model, a trim line that splits the difference between a garden-variety 5-Series and the M5. The upshot is that, while the S1 M550i xDrive's specs hold up against the latest M5 on paper, the net result is a vehicle with a substantially different personality than your typical M car.

As with Dinan packages in the past, the company's collection of upgrades for the M550i xDrive focuses on engine output, suspension tuning, and aesthetic tweaks. 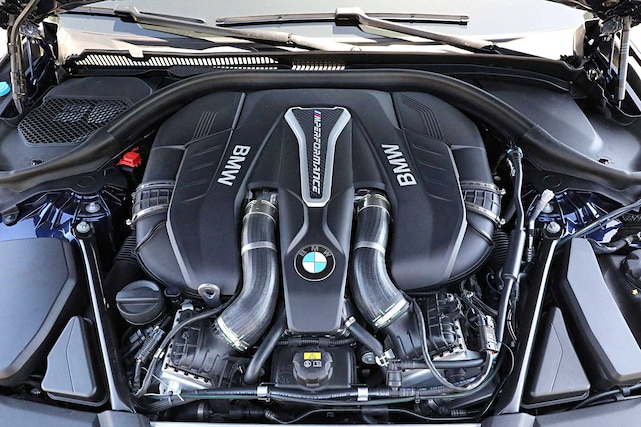 To take the M550i's 4.4-liter, twin turbocharged V8 from its factory rating of 456 horsepower and 480 pound-feet of torque to a lofty 606hp and 635 lb-ft, Dinan's Stage 1 tuner is brought into the mix (ostensibly a 50-state legal ECU tune), along with a high-flow mid-pipe and a stainless exhaust system with four massive four-inch exhaust tips.

On the handling front, the S1 package includes a set of Dinan-tuned springs. Said to deliver greater control over the car's roll, squat, and dive characteristics, the springs are 15 percent stiffer than the stock coils at both the front and rear. The springs also lower the car by three-quarters of an inch for a more aggressive, performance-oriented stance.

Those springs are supplemented by Dinan's progressive rate bump stops to provide increased suspension travel and compensate for the drop, in turn preventing the car from potentially bottoming out during significant compression events.

The Dinan S1 M550i xDrive rides on a set of Forgeline AR1 wheels, which are wrapped in Michelin Pilot Sport 4S rubber measuring 265/30R20 up front and 295/30R20 in the rear. And to help the S1 stand out from a typical M550i, Dinan has outfitted the car with an array of M Performance accessories, including front bumper trim, black kidney grills, and carbon fiber replacement pieces for the mirror caps and rear spoiler.

Before the F90 M5's debut at the 2017 Frankfurt Auto Show, the M550i was the most potent machine in the current 5-Series lineup, and Dinan's trusted expertise tuning BMWs made the S1 package a compelling choice for owners looking to extract more capability and style out of their vehicles. In a post-M5 world, Dinan faces an uphill battle with the S1 M550i xDrive, due in part to the factory M550i components that the tuner hasn't touched here. 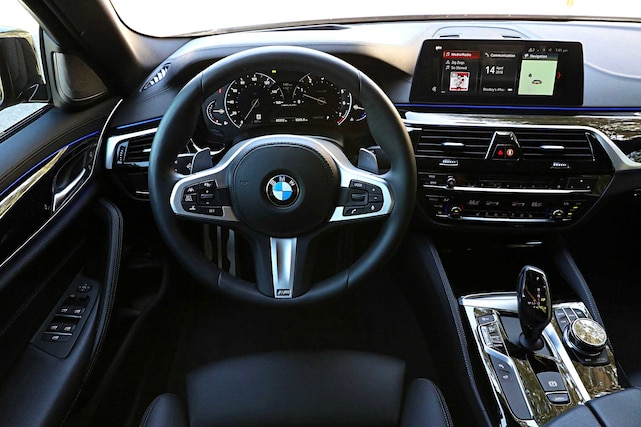 The new F90 has been touted as the fastest and quickest M5 ever, rocketing to 60 miles per hour in just 3.2 seconds on its way to a 189 mph top speed. But beyond its straight-line prowess, the M5 is outfitted with M-spec hardware throughout, including larger brakes with better heat management, a performance-focused steering rack, a taut suspension, and nearly 300 pounds less weight due to its carbon fiber roof and other light-weighing measures.

Set out on a twisty road and it quickly becomes clear that the Dinan S1 M550i xDrive is still more of an autobahn stormer than a corner carver. Without any tweaks to the gearbox software, steering, and brakes, these systems feel merely adequate for the task of hustling a 4,400-pound car with this much power along a mountain road at their best, and a step or two behind the power plant at their worst. Brake pedal feel eventually deteriorates as the unslotted rotors — which are paired with four-piston calipers up front and single-piston units in the rear — start to give way due to the heat.

In spite of Dinan's suspension tweaks the M550i still feels less enthusiastic about tackling the twisties than we'd hoped. While the combination of all-wheel drive and Michelin performance rubber translates to a healthy amount of grip, the S1 undulates and has to re-settle itself at times. It's a characteristic we noted most often when encountering mid-corner bumps with some pace, even with the adaptive suspension set to its sportiest mode, and it never lets one forget how much heft the car is lugging around. However, the good news is that it translates to excellent ride quality during everyday driving, and further bolsters the notion that the S1 is at its best when used as a fast grand touring machine rather than hunting for apexes. 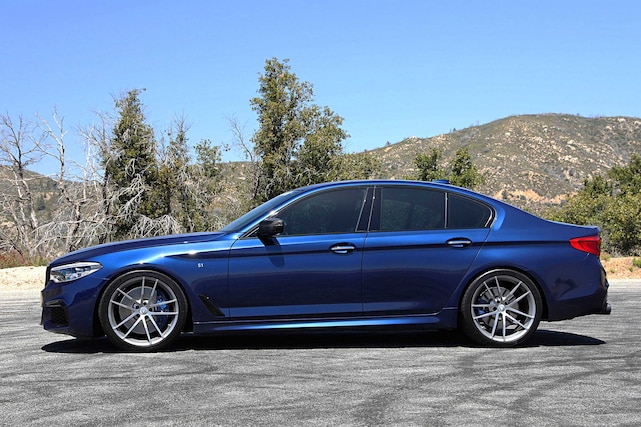 While the standard car wasn't exactly hurting for power, the Dinan tune takes the boosted V8's grunt a noticeable step further, undoubtedly dropping its sprint to 60 mph by a few ticks in the process. We'd speculate that the M5 might still have the edge in a drag race, though, and despite the new exhaust system, the bark of the 4.4-liter mill still sounds rather distant inside the M550i's even at wide open throttle. Chalk that up in part to the car's well-insulated cabin.

Aesthetically the S1 isn't a radical departure from the standard M550i, but the hunkered down stance, blacked-out trim and badges, and Forgeline wheels are successful in their mission to give the car a bit of subtle flare versus the factory offering — perhaps even outshining the M5's beefed-up look for some folks' tastes.

The collection of Dinan pieces in the S1 package add up to $14,079 before installation, bringing the S1 M550i xDrive's as-tested price to $98,144. That's only a few grand shy of the F90 M5's $102,600 starting price — a difference which would be partially eaten up by the installation charges associated with the aftermarket hardware. But it's also worth noting that Dinan offers all of these upgrades a la carte as well, allowing buyers to pick and choose components as they see fit. 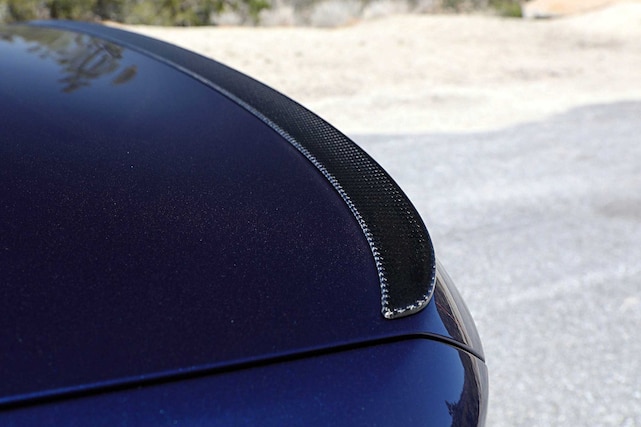 Whether or not the tweaks included in Dinan's S1 package for the M550i xDrive are enough to lure away would-be M5 buyers from the more-expensive factory alternative is a largely subjective matter, as these two cars really have different missions at the end of the day. But for enthusiasts who already own an M550i or aren't interested in the M5's track-honed setup, some of Dinan's modifications are definitely worthy of further investigation — especially if you're looking for a way to get more grunt out of that twin-turbocharged V8 with minimal hassle. 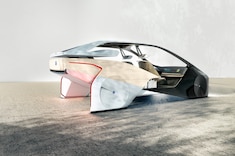 "BMW i Inside Future sculpture” is a glimpse into the world of automotive holograms, and a 5 Series prototype shows off its autonomous driving and parking capabilities 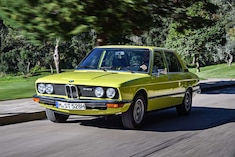 BMW Releases Videos on the History of the 5 Series

BMW is releasing a six-part video series on the history of the 5 Series. Watch the first videos here. 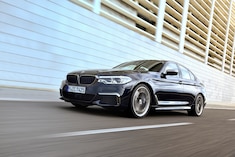 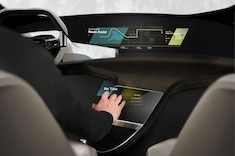 After introducing gesture controls on some of its production cars, BMW will show off a holographic touchscreen at the CES show next month in Las Vegas. 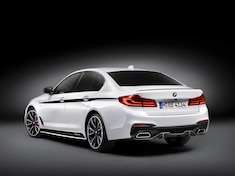 The BMW 5 Series Sedan goes on sale early next year, but BMW is already teasing us with sporty, new M Performance parts and accessories.

We get some seat time in the new 2018 5-Series prototype and speak with some of BMW's engineers to get an idea of what to expect from the next gen. 5-Series. Clive Owen reprises his role as "the driver" 15 years later for BMW Films' latest short flick "The Escape." His ride of choice? The 2017 BMW 5 Series.