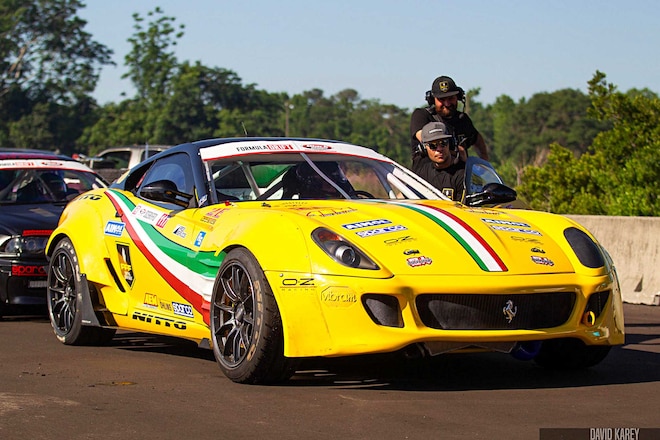 "Where were you when the Ferrari caught on fire?" will likely be the question still being asked by the end of the 2018 Formula DRIFT season, despite the incident happening at Round 1 in Long Beach. Where was I when it happened? About 200 feet away, in the middle of the event's AutoCon car show. I was shooting pictures and all of a sudden everyone around me started to run in one direction. I figured there was either a fight, someone getting naked, or Godzilla was attacking Long Beach. A fire never occured to me, but as I turned and saw the huge plume of smoke, I was shocked but not scared. However, when I got to the scene and saw that driver Federico Sceriffo was still inside the twin-supercharged, V12 Ferrari 599 GTB as flames intensified, I nearly had a code brown.

Luckily, Federico made it out of the car with no injury. His car on the other hand didn't escape injury. The front driver's side of his V12 599 GTB—which he named "Fiorella"—was cooked well-done with a generous seasoning of race fuel. 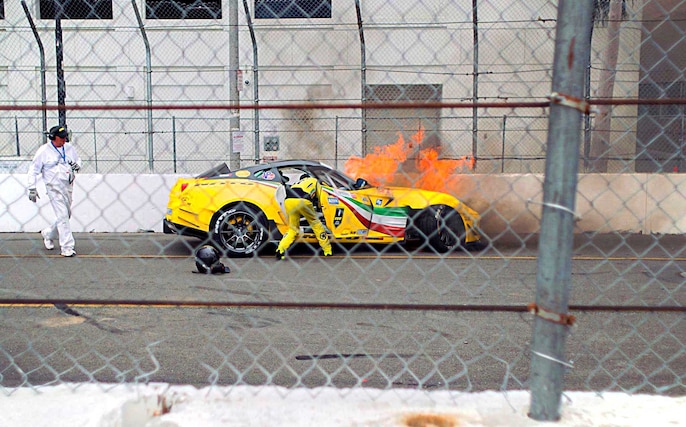 Believe it or not, the actual fire isn't the the craziest part of this story. It's the fact that in what is likely record time (10 days working 15 to 20 hours per day) the car was back together and competition ready for Round 2 in Orlando. Sure, the car only had half a livery, but the important part is that it was running and, most importantly, not on fire.

But how did Fedrico's team, FFF Drifting Department, do it? How did he and his team get the car back in shape so fast? I mean, we're not talking about your garden variety 240SX here; the 599 GTB is already a highly specialized car in stock trim, much less in race-car form. Body shops can't even work on the 599 without a special chassis jig meant specifically for it. 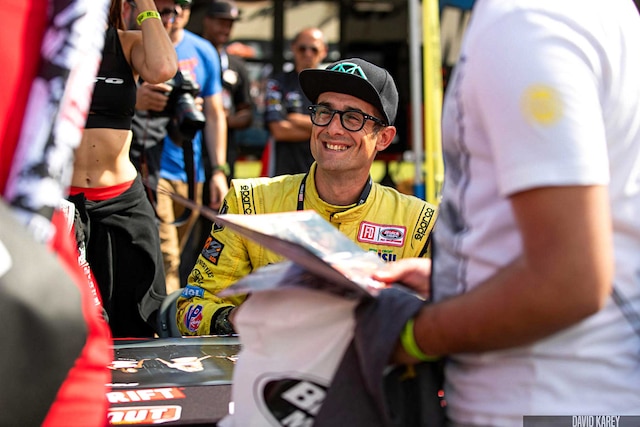 We were lucky enough to speak with Federico shortly after round 3: Road Atlanta to learn what the fire was like from his perspective and just how he got his car back on track in time for the next round of Formula Drift.

Super Street: Have you ever been in an accident like that before?

Federico Sceriffo: I have had accidents before, but I've never been at risk of burning alive inside of a car.

SS: Can you describe what happened.

Federico: It was quick and obviously unexpected. My mistake was not taking a "5 Minute [Timeout]" to check on the car before the next run. I cracked a bolt when I hit Chelsea in the first run that broke when I turned right to enter the first corner at Long Beach. That made my tire rip off the fuel hose protection box when I hit the wall at probably 10km per hour. The last hit caused an electrical wire to snap, and then the world knows what happened after that... 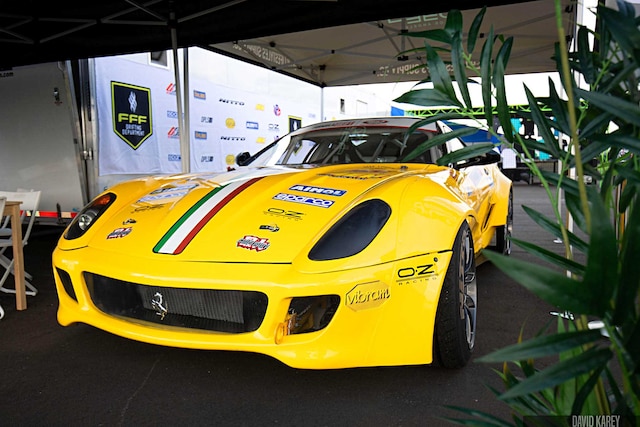 SS: Was fire suppression pulled? Was it routed to engine compartment?

Federico: It was pulled. But the car was switched off and I wasn't able to activate it because of the electric wires that were previously ripped off.

SS: Can you describe the damage afterward? Was it mostly soft parts, like lines, hoses, wiring harness? Were any hard parts affected?

Federico: Not in any particular order but the engine harness, suspension cross-member, chassis components, body kit, silicon hoses, wheels, and a few other parts were all damaged.

SS: Briefly, what was the process like to rebuild? Who helped bring the car back to competition form?

Federico: The car was brought to R3 Motorsport in [Los Angeles], where I have been hosted, "adopted," and strongly supported by Ryan and Antonio who made everything possible. R3 Motorsport is a Ferrari Racing Department Team and the chief mechanic is Antonio, a well known Italian supercar engineer that has lived in America for the last 20 years. I was under huge pressure because I was the only one who knew the many of the specifics of the build. My mechanic from Italy and assistant Simona were able to give details and some guidance to Antonio. Together, we did the impossible. All in just 10 days after everything happened. 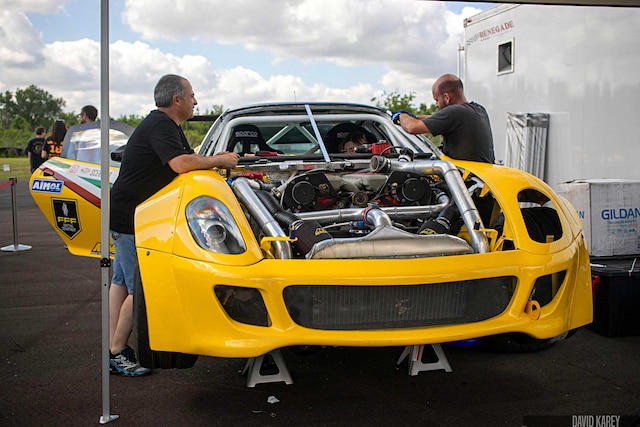 SS: We understand you had to put the car on a specialized 599 chassis jig - I'd imagine there are only a few of those in the world.

Luckily, I have a lot of special friends around the world that just want me to continue my story and help me when I am in an emergency.

SS: Is the car back to 100 percent? We noticed in Orlando the hafl-finished livery and that your crew was still vacuuming out small bits left over from the accident.

Federico: The car is back to 99.99999 percent! It's not easy to forget what happened. And we are still working hard to make the car better and better every event. We were working non-stop while traveling in the USA for half of March and after the fire I couldn't stop for even one day to be honest. In regards to the livery, I already had an idea to do a contest on our socials networks to have fans create a new livery and we will choose the best one.

A nearly insurmountable task with a highly unique and specialized car, completed in a neigh-impossible amount of time. Say what you want about his car and the seemingly crazy decision to slap two superchargers on it and go drifting. The one thing that can't be questioned is Federico Sceriffo's—and his team's—resolve. 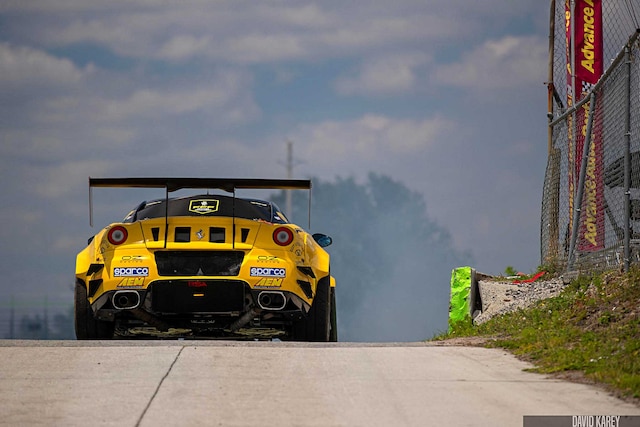 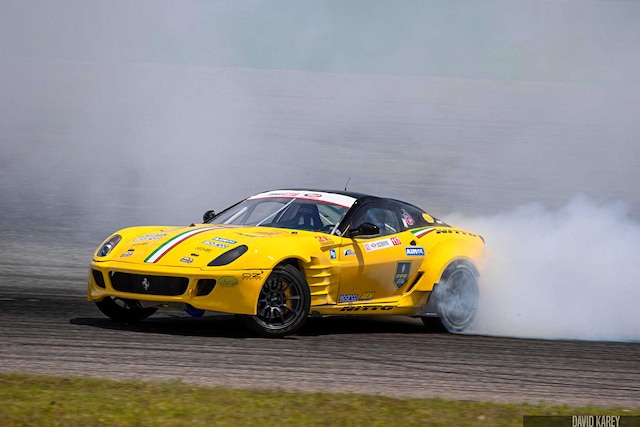 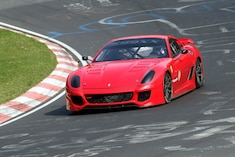 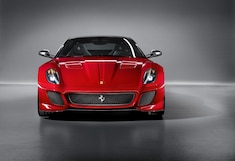 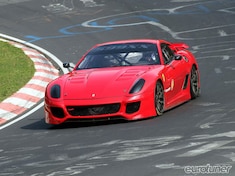 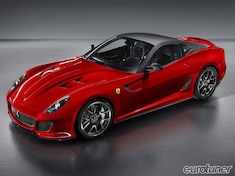 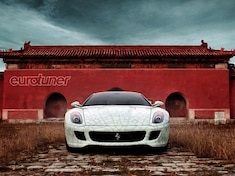 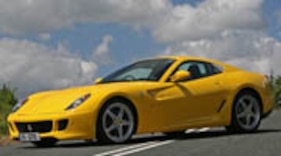