Adventures and agony of a dynamic Datsun duo 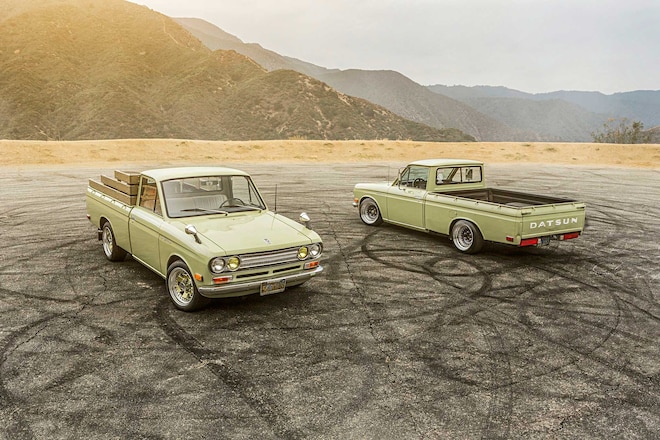 There are two sides to every story, and in this case, two builds for one chassis. In essence, the Datsun 521 pickup was the micro machine Japanese alternative to the heavy-handed Ford F-series and the strongly lined Chevy C-series. But where the little Datsun pickup owned the American competition in the weight department, even the truck's most potent L16 produced fewer than 100 carbureted horses right out of the gate, and its sluggish four-speed manual gearbox was never widely known for acuteness. Which leads us to the first of our two Datsun 521 pickup builds today, and the man who went to great lengths in order to install something special under the hood. 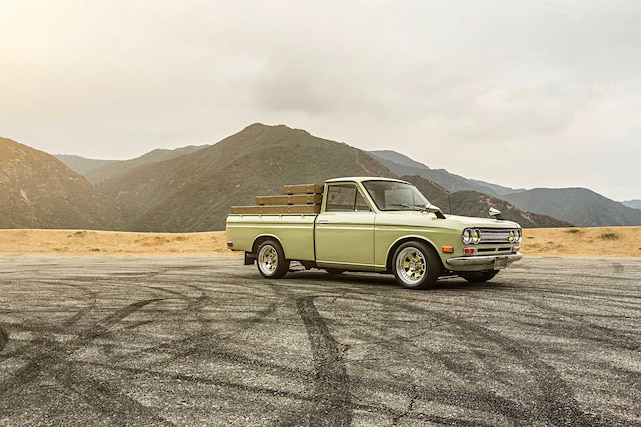 Jose Tarin knew he wanted one of these oddball automobiles the minute he wrapped up his previous 240Z project. The 521 in particular was what continued to strike his fancy. After a few months of searching, he located a scuttled specimen for less than two grand. One glance at the Datsun in person and Jose knew he was taking this pint-size pickup home.

Upon taking possession of the truck, the notion of keeping the stock L16, four-speed transmission, and drum brakes started to take hold, at least until Jose hit the interstate for the first time. It needed much more power in order to keep up on the freeway, which also meant adding a couple more gears for high-speed cruising and better suspension for safety. 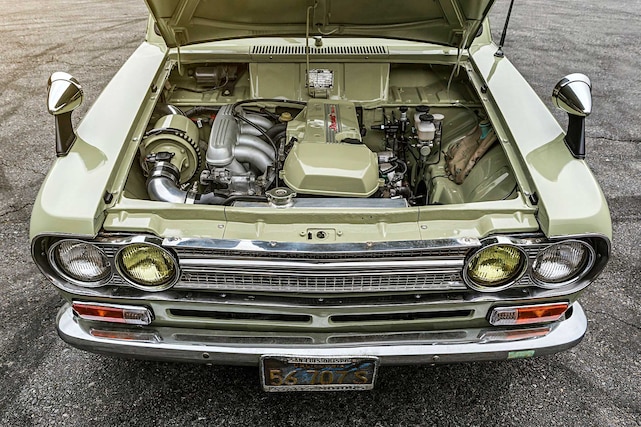 Dumping the tired L-series for a Toyota 3S-GE BEAMS swap immediately put the build on the special side, and with its higher rpm range, breathed new life into the tired old Datsun body. Jose proudly states that this is the first BEAMS swap on a Datsun pickup from this era, and that it required a metric mess-load of custom fabricated components in order to be deemed operational.

Sizable in stature, the motor's front sump setup made fitment between torsion bars a royal pain though, and so the removal of portions of the firewall as well as parts of the transmission tunnel were needed to properly equip the six-speed Toyota J160. Jose also says that the stock sway bar ended up impeding progress as well, so a 1-inch version had to be added to the list of mandatory modifications. Once the swap was nearly tidied up, Panic-Wire was called in to rework the stock harness so the ECU could be mounted inside the cab. 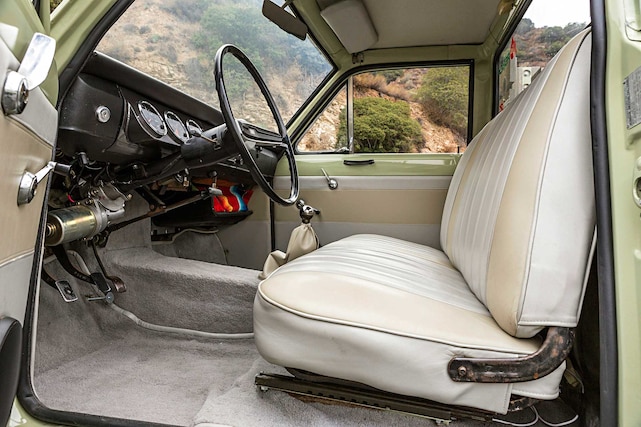 It was on to interior upholstery next, something that Jose was happy to handle personally. Grey leather and green vinyl were sourced in order to match the exterior pigments of the 521, and since Jose has always been a fan of simple and clean interiors, a Speedhut tachometer, speedometer, and a 4-in-1 gauge for water temps, oil pressure, voltage, and fuel were applied. 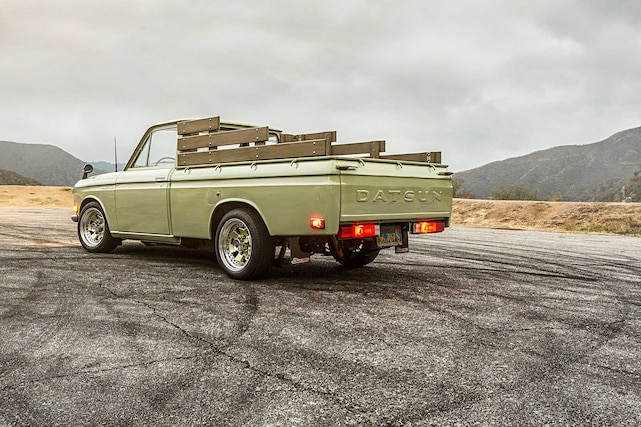 Going with a Seafoam green color from a Datsun 546 helped make the truck look as close to original as possible, plus with three-piece Work wheels underfoot, retro appeal oozes from every wheel well. But that paint and those alloy rollers are far from being Jose's favorite parts of his pickup. That honor is reserved for the rich red oak stake racks that make the 521 pickup look all the world like a mildly modified average working man's truck, which for all intents and purposes is precisely what its owner wanted in the first place. 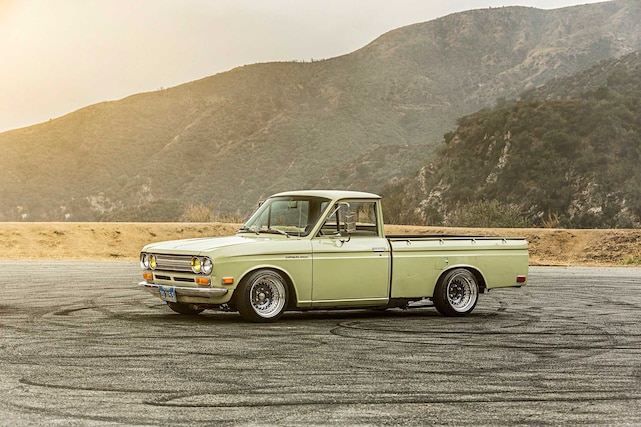 The other truck in this feature is a very different build altogether. While Jose's story appears to be quite straightforward in many regards, Jason Tayler's tale is one that is filled with twists and turns, and it all starts with his wife's family being Datsun 510 fanatics. Apparently, Jason's father-in-law had a turbo six-cylinder-swapped 510 at one point, and when she was in her 20s his wife dailied a 510 with ITBs. For Jason, it was the appearance of a little green Datsun 521 that tipped the scale. He was enamored beyond words with what he saw, and even though the asking price was absolutely asinine, he knew he had to have it. Lowered and mildly refreshed, with an interior that was in acceptable condition, all original paint, and not a bit of Bondo to be seen, he was sold even with the high asking price. 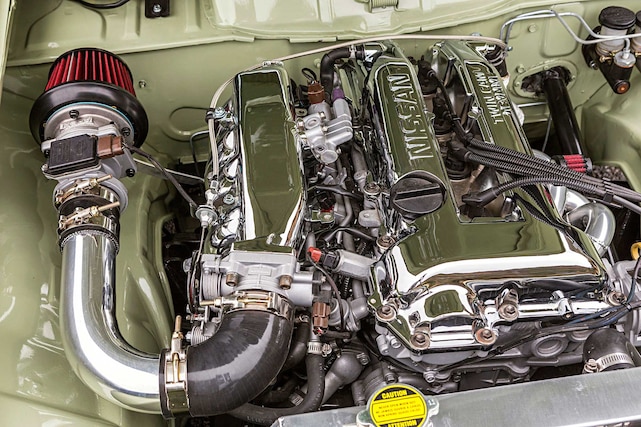 Jason cruised around for a couple months and then began to fret over his prized possession. Every time he heard a strange noise or noticed an odd aroma, he panicked. The pickup may have looked badass, but it was borderline unreliable and desperately needed an update in a multitude of areas. So, with a naturally-aspirated SR20 swap on the calendar, and the goal of not a gauge, stereo, or speaker to be seen, the clean OG approach was looking like the way to go, at least all the way up until the build began. 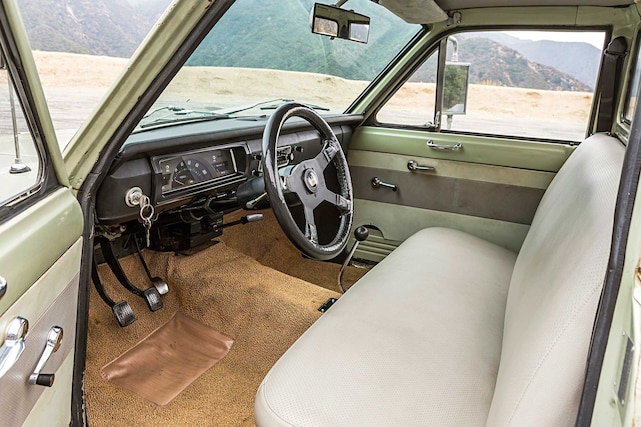 Extra parts suddenly needed ordering, costs not included in the original quote magically arose, issues with painting and shaving of the engine bay materialized, and the shop he had selected wanted to use the old existing motor mounts instead of fabricating new ones. The e-brake also needed to be removed since it wouldn't work with the stock manifold, the speedometer didn't work, and the ECU wasn't behaving as it should.

Frustrated yet optimistic, Jason delivered his project to another shop to solve a couple of the problems, for example a custom header which allowed the retention of the stock e-brake; however, things still weren't going well overall. Upon closer inspection, Jason was devastated to find that the motor mounts were cracked from being twisted and forced into position, and the tranny mount was a little more than a hunk of iron with mismatched bolts. The wiring was also a complete mess, there were runs everywhere in the paint, welding wire could be seen all over the place, and the truck had been sitting outside in the elements for weeks.

Long story short, the shop ended up fabricating most of the bracketry and reengineering the truck's three-link kit before redoing the entire front-end in order to make the coilovers fit. Then after popping in a limited-slip, Jason took the truck home for the first time. No more than 15 miles down the road, and an explosion erupted from the underside of the truck, followed by a loud grinding noise, no lighting, and a cell phone battery that was almost dead. After the fourth call to the shop, the owner finally answered, listened to what happened, and then responded with a snide, "You can have it towed here but I can't look at it for at least two weeks." 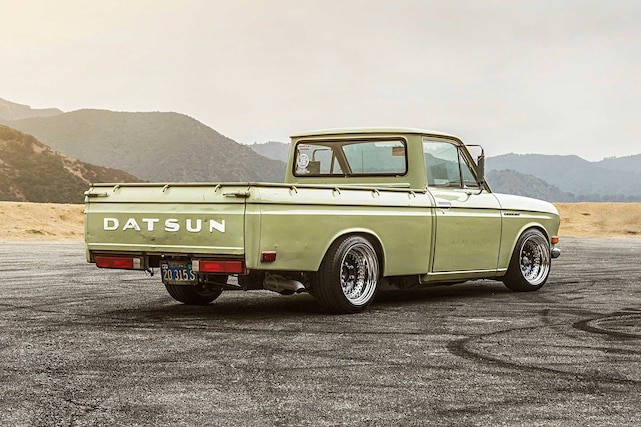 After nearly an hour of interstate agony, and a $300 AAA bill looming, Jason was feeling beyond dejected. While waiting on the wrecker, a little Miata suddenly pulled over and a kid who couldn't have been older than 19 hopped out. His name was Ramone, and he wanted to help. Jason told him what had happened and how he only had ten remaining AAA miles, to which Ramone replied, "I have 100 miles on my AAA, you wanna use mine?" 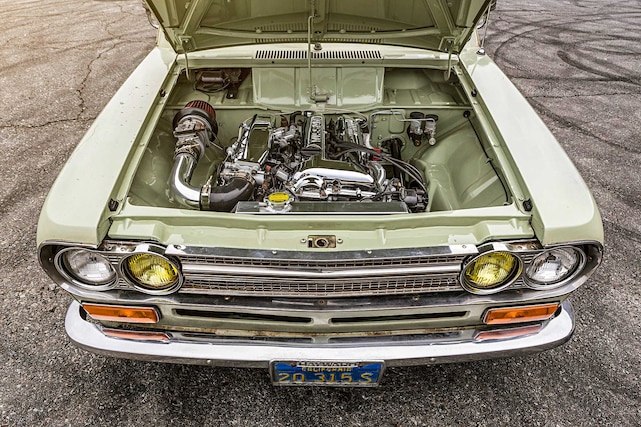 Jason was left speechless by this unexpected act of random kindness, and after getting the truck home safely, promptly gave up on both shops and took the truck to Hoopers Rear Ends. After looking underneath, it became obvious that the axles had been installed with the wrong amount of play, and since the bearings had not been greased, they had seized on the freeway. Fortunately for Jason, he had pulled over just in time, and in the process saved the freshly built LSD.

So with two days to spare before the Japanese Classic Car Show '17, thanks to a kid named Ramone and small differential shop called Hoopers Rear End, the little 521 pickup was finally ready to roll, this time without risk of catastrophic consequence. It was a surreal time for Jason, as just a short time prior, he had lost all hope of making JCCS. 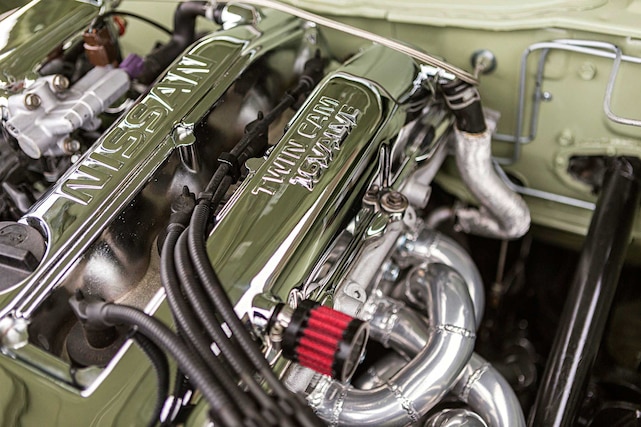 At the show Jason ran into Ramone and his dad. He was quick to compliment the young man's father on what an outstanding good job he'd done in raising such a genuine and generous gentleman. While Jason didn't get to take home a trophy that day, he left with a couple of prizes that no car show judge could ever offer - a newfound respect for complete strangers, the power of kindness, and a finally completing a weekend cruiser that his whole family could love and appreciate. 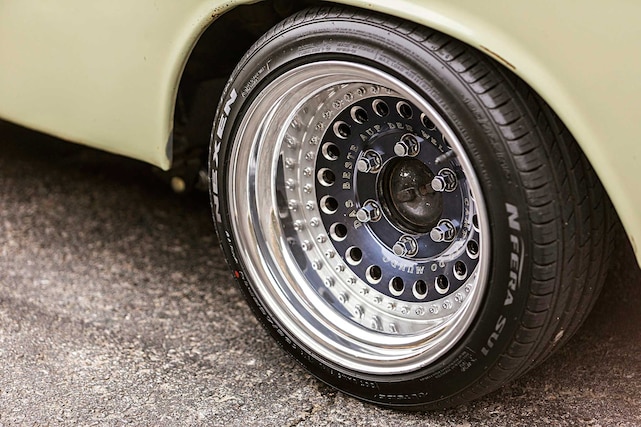 All told, what you have here today are two completely different build stories and powerplants, but all based around one incredibly loved little oddball chassis. Japanese pickup trucks from this era are a bit of anomaly in the tuner world, and because of that one must admire what both men have gone through in order to overcome all odds and build the ultimate dynamic Datsun duo.