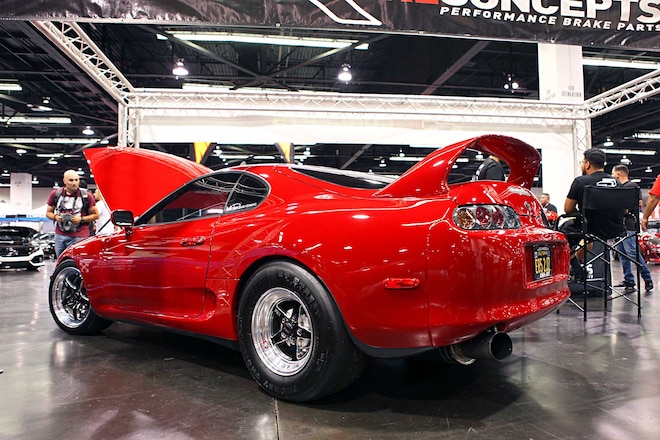 There are a handful of cars that tend to do well for Super Street's social media channels regardless of their state of tune. That is, whether the car is just nice and tidy or a fully built, world beater, you're likely to see some rapid fire comments once it goes live. For example, cars like the Skyline, hachiroku, NSX, FD3S, and not to be left out, the MKIV Supra. 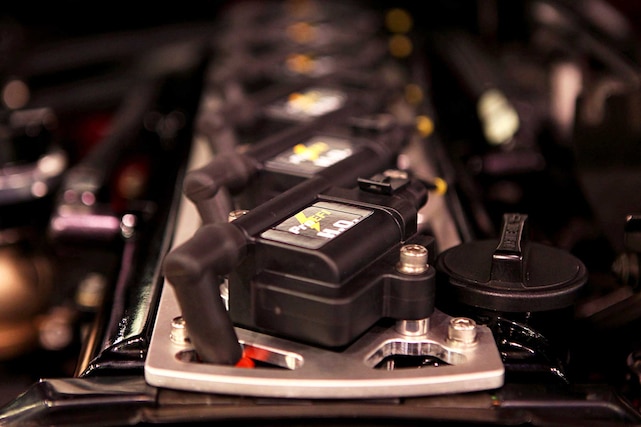 In the real world—you remember, the place that doesn't require constant swiping or a USB outlet close by—any of the above mentioned cars will help spark up an automotive-related discussion and produce some smiles based on the way they look and feel as well as how much native potential they possess. Legend and tall tales abound whenever the mighty 2JZ-GTE is even whispered about, so when we ran across Tho Nguyen's bright red version in the R1 Concepts booth during the Spocom Anaheim event, we couldn't help but step in for a closer look. 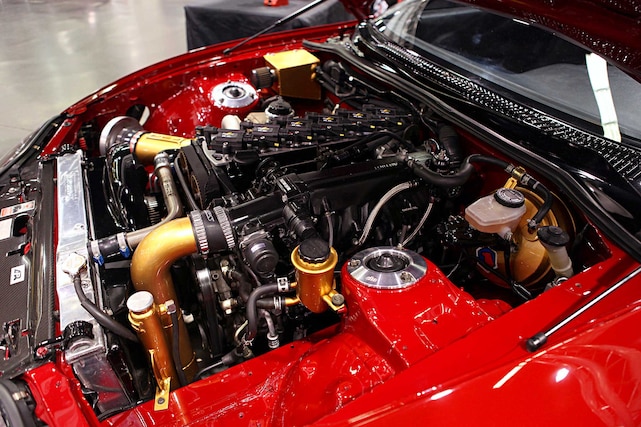 Forget the popularity factor and disregard the digital social status entirely; when one of the best to ever come from the golden era (a time when manufacturers were producing cars that you and I couldn't get enough of) it earns your attention immediately—perhaps even faster when you see one as clean as Tho's '94. 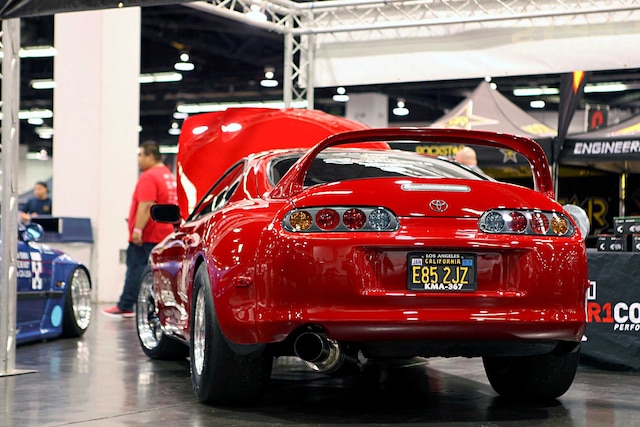 There are as many MKIV Supra aftermarket body options as there are loyal fans, and one glance at this build revels that other than the front lip, this owner wanted none of them. The plan it seems was to keep everything except the powerplant as simple as possible. Tho adds, "As you can see, there's not much going on with the exterior, interior, sound, etc. Due to the fact that my only plans with the car are to race!" And race he does, recently making an appearance at Shift S3ctor's 1/2-mile battle royale where it clocked an impressive 187.57MPH pass. 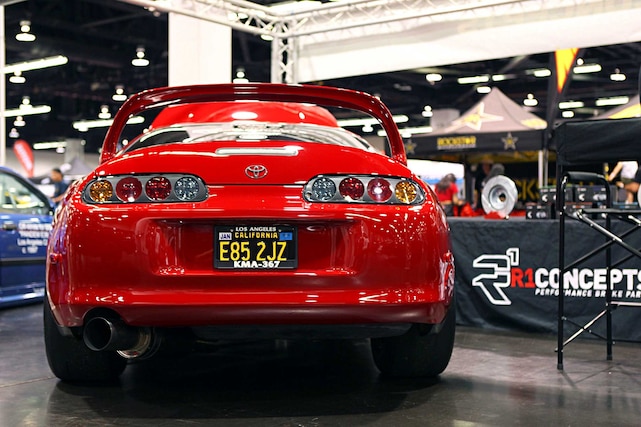 Reaching speeds like that doesn't come cheap and breaking down some of what's gone into Tho's engine bay reveals just how he was able to get there. The fabled 2JZ is praised for holding plenty of power on its stock block, but he was after more than "plenty" with a goal of reaching that lofty 1,000hp mark. 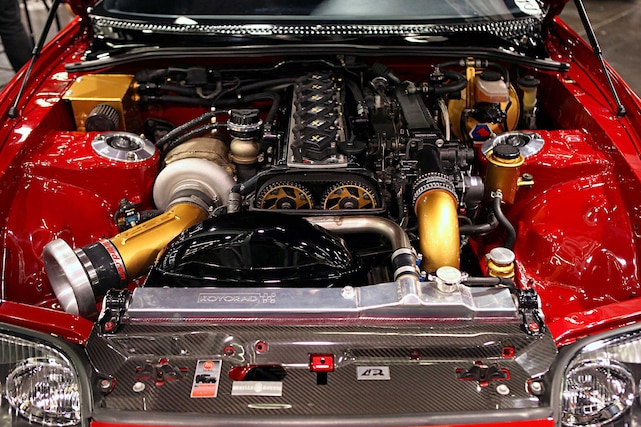 The foundation starts with CP 10:1 compression pistons and Brian Crower HD H-beam rods, along with Real Street Performance billet main caps and ARP main and head studs. Up top, GSC S2 billet cams, beehive valve springs, and retainers work with BC cam gears as the rush of unnatural air violently enters the head via the Precision 7675 Gen 2 DBB turbo that's attached to an FSR Motorsports manifold. Waste is sent to the atmosphere with an FSR 4-inch downpipe to an HKS Carbon TI exhaust, or if the mood calls for it, an SP actuated cutout. 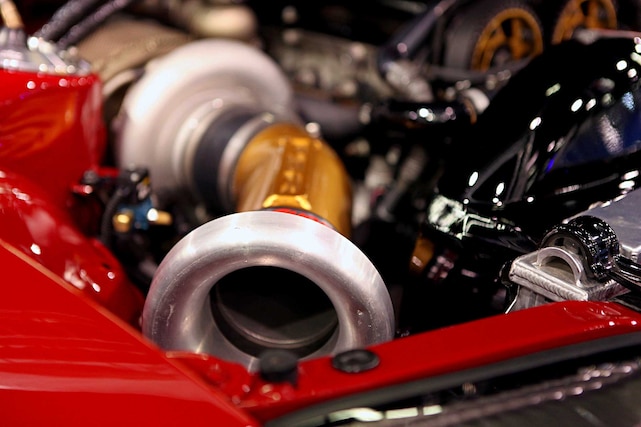 MPG wasn't a concern on this build and it's a good thing, considering it takes three Walbro 450 E85 fuel pumps and a set of FID 2,000cc injectors to fuel the fire. The combination of heavy hitters equates to a ridiculous 945lbs. ft. of torque and over 1,100whp thanks to the tuning skills of Ian at FSR and a ProEFI 128 management setup. 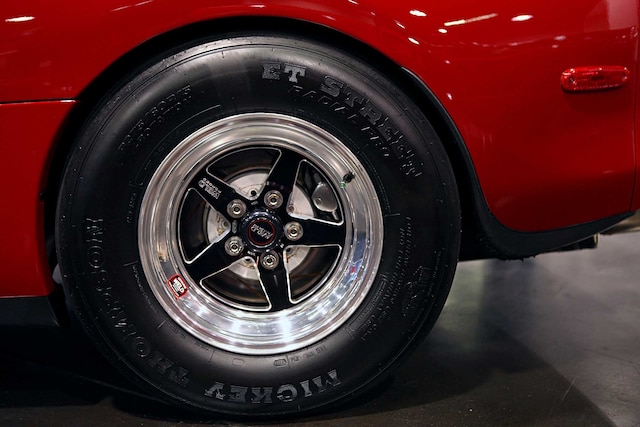 Trying to transfer all of that power and torque to the pavement isn't nearly as simple as the internet makes it sound, and to that end Tho bulked up his V160 6-speed with a ClutchMasters FX850 twin clutch kit and PHR 3.5' one-piece driveshaft. Street tires at full boost are a thing of the past, and instead, Mickey Thompson 275/60s are wrapped around 15in Weld Racing RTS in the rear with a set of 18x9 Welds with Toyo R888s up front. To get the ride height dialed in a set of KW Variant 3 coilovers are on duty at all 4 corners. 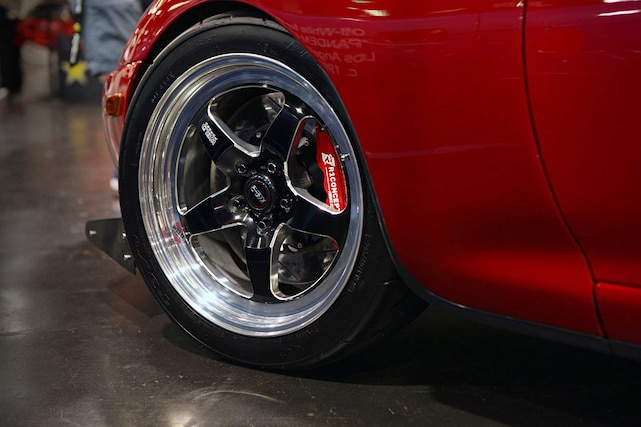 With passes of almost 190MPH on his resume, Tho also needed some help bringing his Supra back down to civilized speeds, and R1 Concepts' big brake kit helps make that happen and looks good doing it. 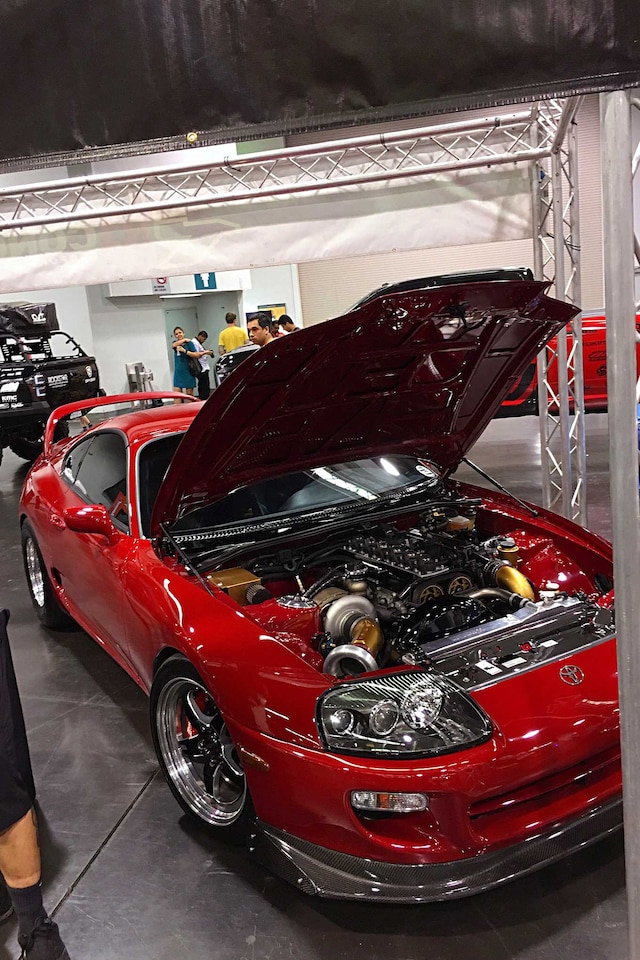 As clean and crowd pleasing as Tho's Supra is, Spocom is actually the first show it's ever been displayed at. Serving as a "booth babe" for R1 Concepts, it was tough to get a clear shot of the car, especially from the front with so many people, and it sat just behind a support pole. Don't worry; this was just a taste as we're going to be meeting up with Tho soon to do a real photo shoot and get the full story on his four-year build up.