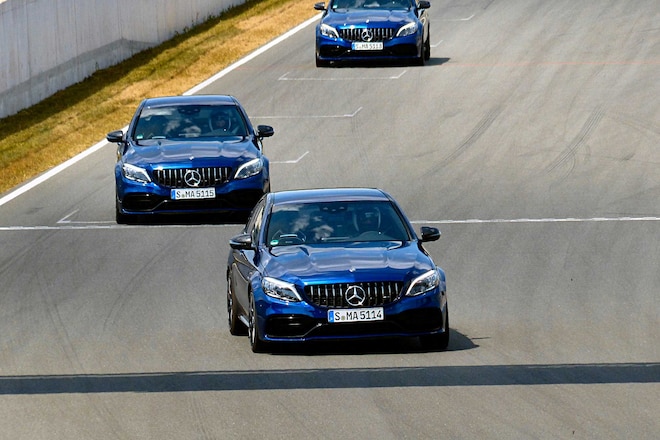 Western Germany's unusual legacy of various and sundry military bases built by NATO allies as a bulwark against the pressures of the Cold War has led to some creative repurposing of facilities no longer needed after the fall of the Berlin Wall and the thawing of Europe's political climate. 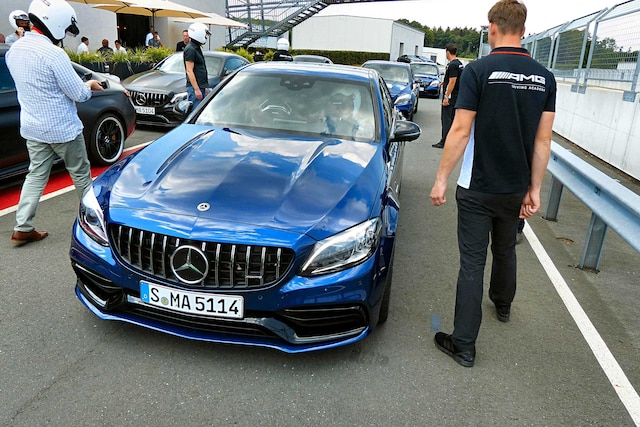 Of these, perhaps none is more appealing to gearheads than the Bilster Berg Drive Resort. Situated just outside of the town of Bad Driburg, and built on the grounds of a British Army ammunition depot, this private race track is the brainchild of Formula One darling Hermann Tilke, the same man who penned Circuit of the Americas and Shanghai International Circuit, as well as helping to modernize Fuji Speedway and the Nurburgring.

It's the latter track to which Bilster Berg is most often compared, due to the significant and rapid elevation changes—44 dips and dives in total—that drivers experience over its 19 corners. Tilke also tapped Walter Rohrl for his help during the design process, with the end result that several segments of the course have a distinct tarmac rally stage flavor not often seen on a modern road course.

Bilster Berg's 2.6 miles of track are a strong test for any automobile, regardless of whether it's a road car or a dedicated racer. That Mercedes-Benz chose the facility to debut its latest street fighter—the 2019 Mercedes-AMG C63 S—indicates just how much confidence the company has in its muscled-up bruiser.

As a matter of fact, almost every one of the changes that have been made to the refreshed version of the Mercedes-AMG C63 S for 2019 have been done to improve not just its lap times, but also the confidence and comfort of the drivers pushing it to the limit. 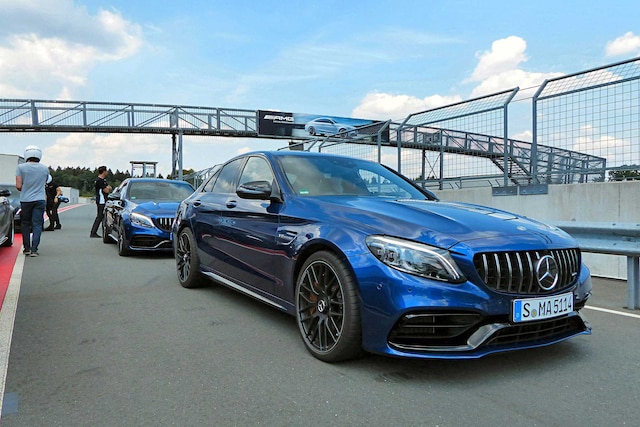 Before I get into what's different, however, I want to underscore that the C63 S retains the boosted 4.0-liter V8 engine that it featured the year before. Unique to the segment (the BMW M3/M4, the Cadillac ATS-V, and the most-recent Audi RS5 all feature six-cylinder motivation), this unabashedly loud and proud eight-pot makes use of twin turbochargers to produce 503 horsepower and 516 lb-ft of torque. These enormous numbers have given the car a well-deserved reputation for anti-social behavior in the form of endless burnouts and waking up the neighbors.

MORE GEARS, MORE GEAR Channeling all of that grunt to the rear wheels, however, is a new 9-speed automatic transmission that displaces the previous 7-cog unit. With it comes a wet clutch in place of a traditional torque converter, a move that Mercedes-AMG claims makes for more rapid sprints from-a-stop (the C63 S covers 0-60 mph in a healthy 3.9 seconds). The transmission also offers the ability to quickly jump multiple gears with the hammer down, and comes paired with a limited-slip rear differential that is now electronically controlled. 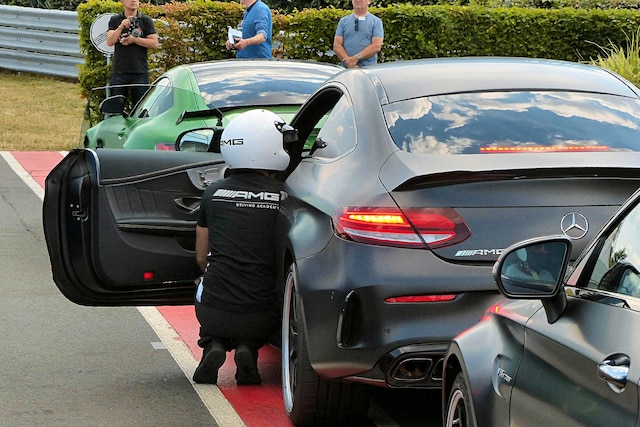 While these are welcome updates, it's the digital side of the C63 S equation that has had the biggest impact on how the car parses the track ahead of it. Specifically, my time behind the wheel at Bilster Berg revealed that two of the Mercedes-AMG's revised driver's aids threw the most color—or is that shade?—on my experience hustling both the coupe and the sedan editions of the car around the course.

Flogging a car as heavy as the 2019 Mercedes-AMG C63 S—and one whose massive torque peaks and dumps at 2,000 rpm—is in many ways an exercise in restraint. Brake too late on corner entry and you'll enjoy an instant physics lesson as the car's mass is inexorably pulled away from the apex, particularly on the long bend connecting the ultra-quick Bilster Berg back straight to the chicane that links up with the hairpin on the front straight. Power out of any of the track's back-to-back corners with too much right-foot enthusiasm and you'll soon find yourself shut down by the car's electronic nannies for an entirely different reason.

In an effort to 'virtually' guide drivers through each lap, the automaker has installed a feature called 'AMG Dynamics' in the C63 S that uses a digital crystal ball to predict the car's immediate future. Specifically, it interprets sensor information concerning wheel speed, vehicle velocity, yaw rate, steering wheel angle, and a host of other data points in order to engage the electronic stability program prior to the vehicle actually getting out of shape, rather than stepping in with a firm hand once the tail starts to slide.

In effect, it's intended as a stealth co-pilot with a steady stream of ones and zeros wrapped around the wheel, brake, and accelerator like the electronic ghost of a DTM driver saving you from yourself at all times. There are varying degrees of freedom allowed within its sphere of intervention, of course—each drive mode, from 'Slippery' up to 'Race' includes a specific AMG Dynamics program (labeled Basic, Advanced, Pro, and Master)—but you can never turn the system off completely. The end result is a surprisingly sanitized track experience in a car whose street personality comes across as anything but. Even with Race mode engaged, I could still feel the Master program gently correcting my inputs and sternly wagging its spectral fingers at me should I attempt to slide the C63 S' 19-inch rear tires more than it considered prudent.

Fortunately, there's some relief to be had should you wish to squirm out from underneath this every-watchful electronic eye. It comes in the form of AMG's new variable traction control system, borrowed wholesale from the excellent AMG GT sports car. 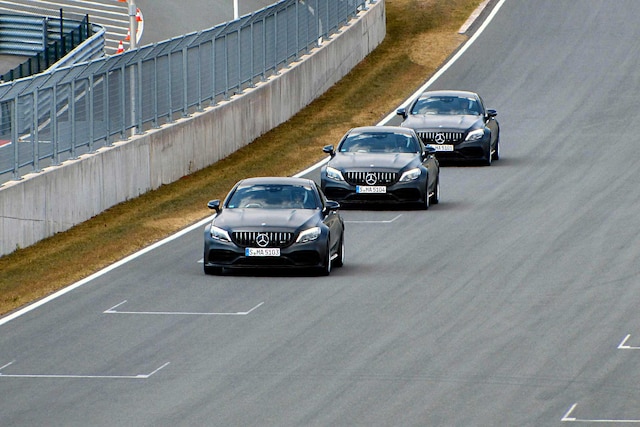 Using a dial on the steering wheel, I was able to choose from nine different levels of traction control engagement, with the lower number representing tighter supervision. In setting 3, the C63 S would skitter and skid with minimal flack from the no-fun police, which was a distinct improvement over the standard Race mode.

Still, there were a number of occasions, even when set to Race, where the car was completely confused by the abrupt g-load brought on by Bilster Berg's sudden drops and side-to-side esses, to the point where it activated its emergency response system, cut the throttle, threw on the four-ways, and killed the air conditioning (to avoid sucking in potential smoke from the flaming wreckage of my lap time). Our pace drivers were apologetic, but there was nothing to be done: safety first, even in an AMG.

Mercedes-AMG's stated goal with the 2019 C63 S was to leverage technology to create a more forgiving, approachable, and repeatable driving experience at the limit, and it's hard to argue that this isn't exactly what the vehicle's engineering team has achieved. For such a large and powerful car, it felt unintimidating when flying around Bilster Berg at full throttle, and I never once doubted in the stopping power of its carbon ceramic brakes, the claws-out grip of its staggered 245/265 series tires, or the ability of its adaptive sport suspension system to handle the vehicle's considerable 3,800 lbs of curb weight. I also applaud Mercedes-AMG for keeping the C63 S rear-wheel drive when so much of the rest of the AMG family is adding additional front-axle traction to the mix. Modern entry-level luxury sports coupes and sedans (there's a cabriolet coming, too) aren't intended to offer a pure driving experience. Rather, they balance the need for daily comfort with the desire for serious power and a responsive chassis—and often, that means looping in elaborate electronic assistants to keep the entire enterprise from getting out of hand.

Would I prefer a world where AMG Dynamics took a break from judging my decisions at speed and let me make a mistake or two in Race mode without nudging me back in the right direction? Definitely. For most C63 S owners, however, this helping hand is a fine substitute for a spin through the grass. 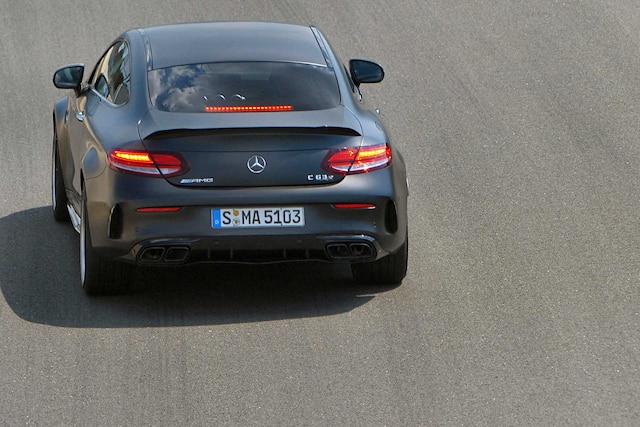 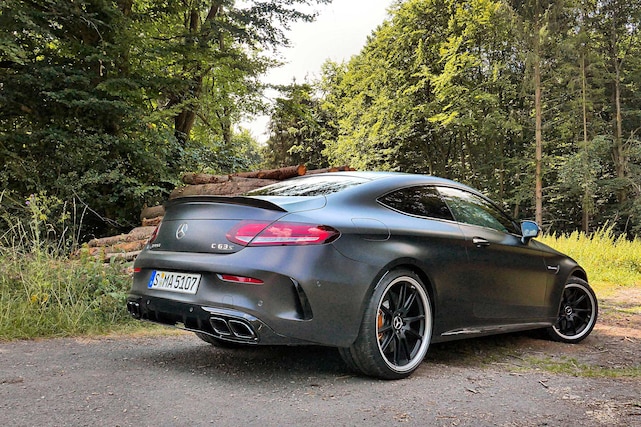 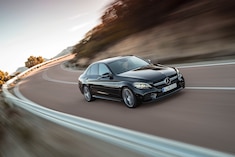 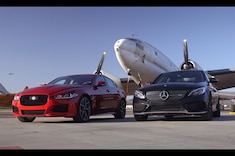 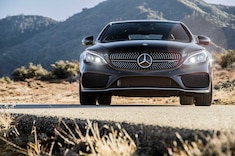 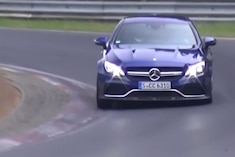 A 2018 Mercedes-AMG C63 R Coupe recently made the rounds at the Nürburgring Nordschleife, tearing up rubber and sliding across the track like a champ 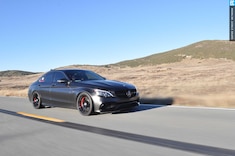 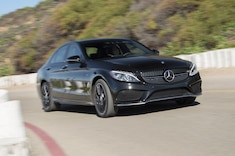