The 2JetZ Creation - Making A Dream Into Reality 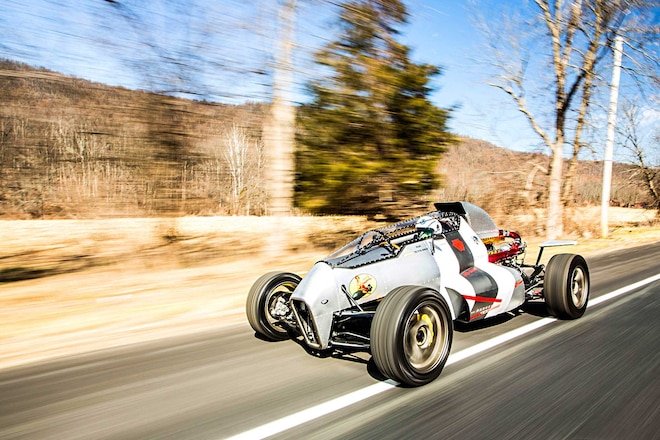 You hear the word "build," and depending on your level of involvement with the world of custom car building, your mind immediately begins tacking parts onto the car being referred to. For those who hover on the surface of our community or who might be newcomers, it might mean a set of wheels, an exhaust, and perhaps a towering rear wing. For the group that's a bit more involved (or obsessed), those thoughts go quite a bit deeper and involve visions that require far more garage time, countless hours of wrenching, and trial and error. Then there's a guy like Luis Rodriguez, an outlier if you will, who takes a different approach entirely when it comes to car building. 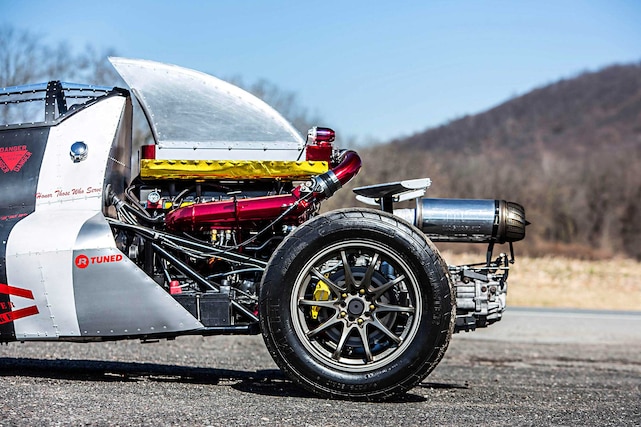 Take a step back and what looks like a fighter jet cockpit on wheels - Volk Wheels, as a matter of fact - looks poised to attack even at rest. The aluminum body and array of rivets (around 3,000 rivets in total) disappear abruptly at the rear, where the engine and transmission are unapologetically on display. So, what is it and how did it come about? Luis explains, "Looking for a new project idea, I was stuck. I wanted to build something that looked scary fast while standing still. I was always a fan of Bonneville Salt flats cars and loved jet airplanes." Combine those two loves and you have the ultimate custom build. That is, if you're as talented and focused as Luis, anyway. 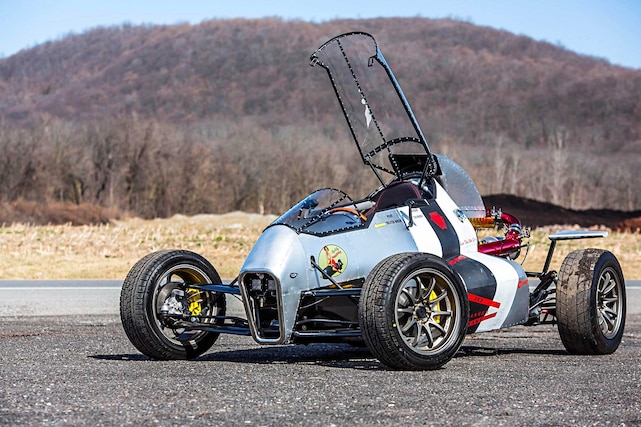 Looking for a starting point, Luis began poking around for an airplane belly gas tank and quickly came to the realization that building something around it would mean far too much unnecessary weight and a certain amount of restrictions were discovered. During his online search, however, he stumbled across a conceptual art piece titled "The Face Peeler" by Dwayne Vance and that was it. Luis found his inspiration. "I contacted Vance, and with his permission I was able to create what I'd dreamed of." 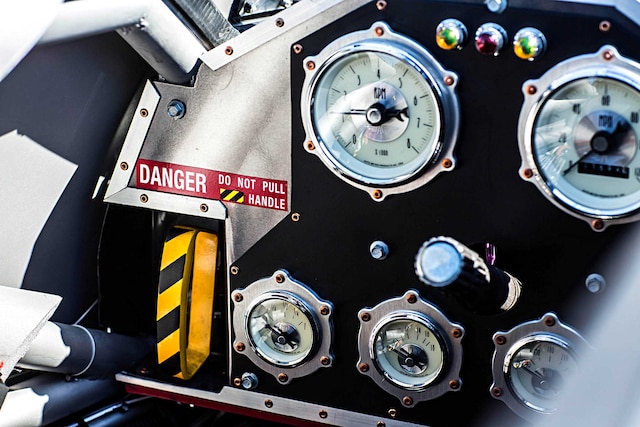 Starting with an actual car and reverse engineering the build seemed to be the most realistic course of action, so a Nissan 300ZX became the starting point. In order to keep the weight down, the modded Z subframe was welded to a custom 4130 chrome moly tubular chassis before the aluminum sheets were cut and riveted to the body. To create a floorboard, aluminum diamond plate was utilized and brackets made to mount a custom bucket seat. Engine vitals are displayed on aviation style gauges complete with warning lights and to make the jet feel that much more palpable, a custom Lexan canopy clamshell's the cockpit. 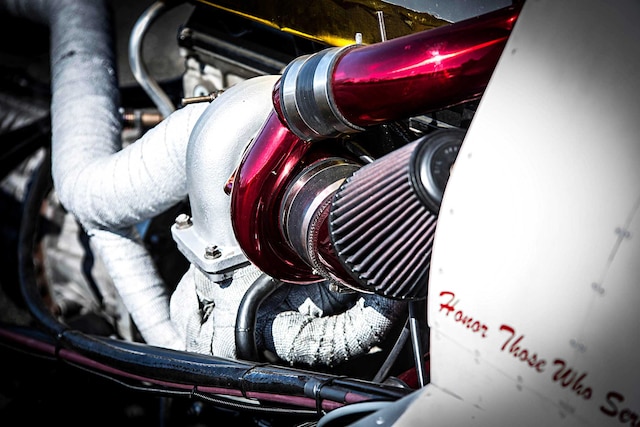 Just behind the pilot's quarters is where you'll find a 2JZ-GTE stuffed with Wiseco pistons and secured with ARP head studs. Up top, the head was fitted with BC cams, valve springs, and retainers, along with Ferrea valves. In light of simplifying the turbo plumbing, the intake manifold was reversed and is fed by a Q45 throttle body. Long gone is the twin-turbo setup, replaced by a single PTE 6262 that sees regulation by a Tial wastegate and leads to a 3-inch exhaust system that has its own unique touch. 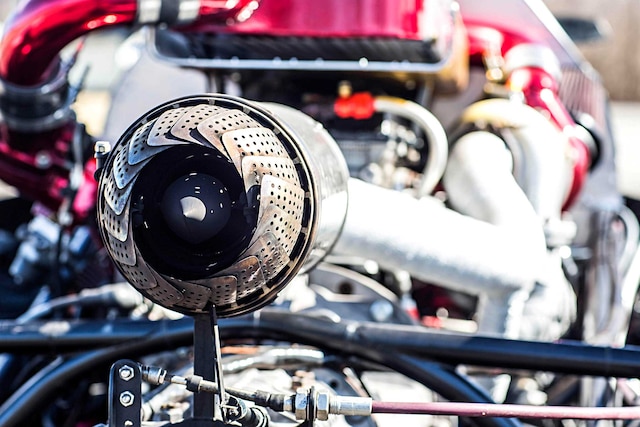 Jutting from the rear, the exhaust finisher is fitted with restaurant-grade vegetable steamer pieces that look just like a jet engine nozzle. Luis ran a drive cable that connects to the gas pedal so that the exhaust tip opens and closes accordingly in order to adjust flow and tone. With an AEM V1 ECU, the 2JZ produces 517hp on low boost and 627 with a bump in boost and 93 octane. 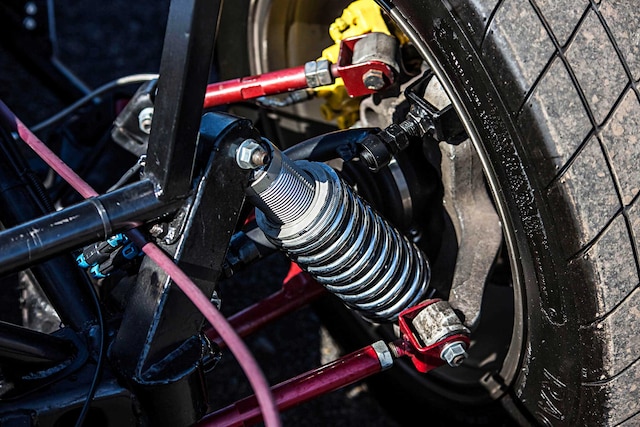 Responsible for putting that power to the ground are Driveshaft Shop 1,000hp axles and a 2010 Subaru STi 6-speed transmission. This is made possible by a custom 6061 aluminum transmission adapter plate, ACT 6-puck clutch and custom Fidanza flywheel. Of course, there's more to power transfer than just the drivetrain and that's where the custom Speedway coilovers and scratch-built suspension parts come in. Chrome moly aero tube double A-arms, front and rear sway bars, rocker arms with horizontally mounted front coilovers and chrome moly push rods all help to keep the canopy side up. 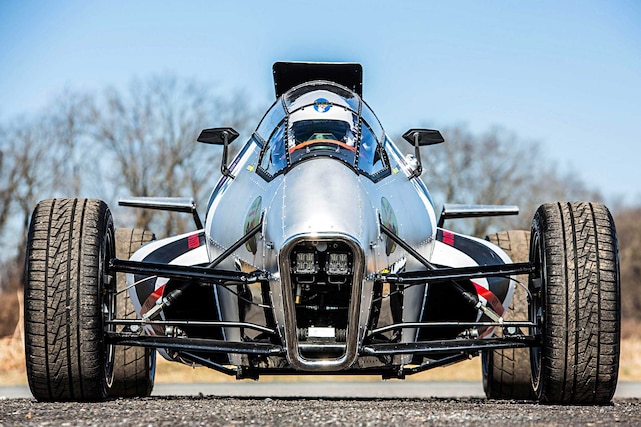 At 1,650lbs and well over 600hp available, not to mention the amount of custom fabrication that makes it all work, the 2JetZ is a standout in the custom fabrication world. The fact he found inspiration in Dwayne Vance's artwork and managed to roll that into his tangible vision of a one-off creation in just a year and a half puts him in a class of his own. 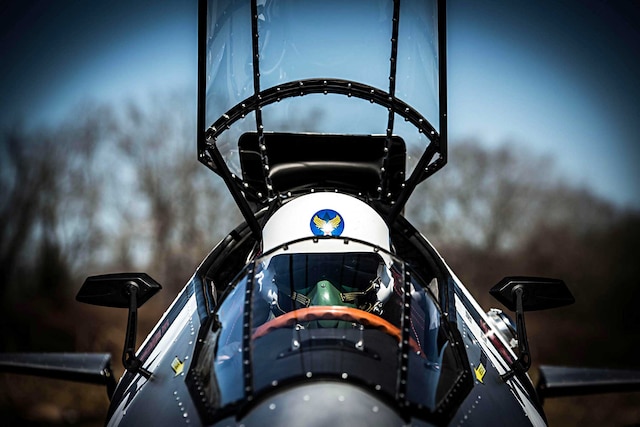 The 2JetZ Creation - Making A Dream Into Reality
Photo /