Taking cues from dad for the perfect MR2 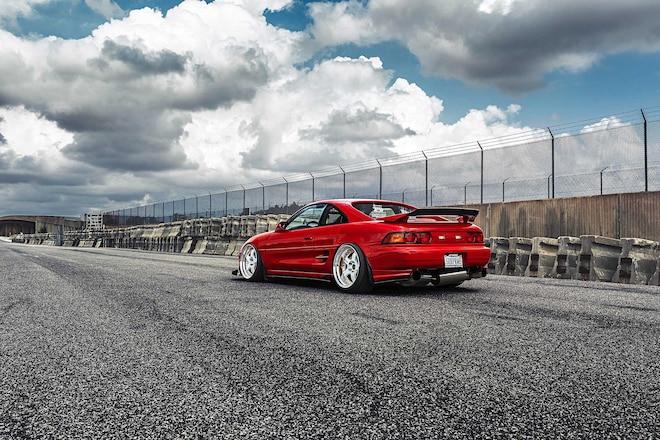 You inherited your dad's oversized Adam's apple and that cowlick on the back of your skull. Johne Santos inherited his dad's allegiance to Toyota and a shared appreciation for the MR2—one that's led to his owning more of the mid-engine, rear-wheel-drive coupes than you thought existed—and tweaking every one of them in ways that'll make you want one, too. 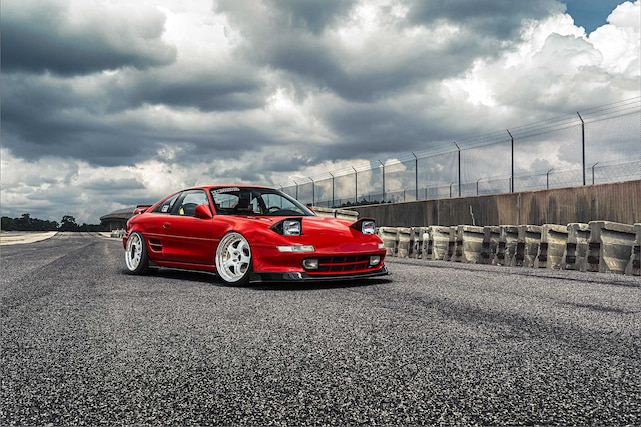 "My father is the biggest influence when it comes to modifying cars," he says, going on to talk about installing car stereos at 16 and why he and his dad remain so hands-on with every one of their cars. "[We] just couldn't pay shops hundreds and hundreds of dollars for something we both could do," Johne says about why the two do things like fabricate their own aero parts and handle just about everything else on their own this side of paint.

Speaking of paint, that Ferrari red hue you're looking at was no accident. Johne's third MR2 happened to be his favorite. It also happened to be the one that got away. That means the impetus for MR2 number four has always been obvious: to recreate MR2 number three. "It was plain and simple to make it look like my third," he says. "As much as I could copy and paste it, I would." Hindsight says keeping the MR2 he already had would've been the smart move, but relocating from Southern California to Virginia meant hindsight doesn't always know everything. "I left the third one [behind] and a friend bought it," Johne says. "Ever since then, I've always dreamed of making one the same." 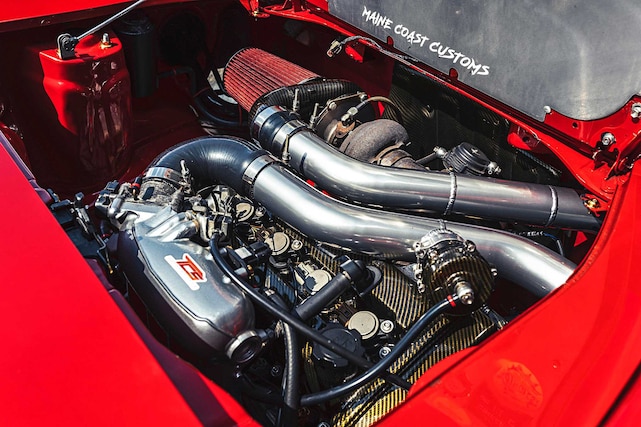 And that's exactly what he did, right down to the car's stance that might make you think this Toyota errs on the side of impracticality, but Johne will assure you he drives at least twice a week and is capable of the same sort of commutes you might subject something like a four-door Buick to. "If the car show is less than a five-hour drive," he says, "I drive the car there and back, despite the stance."

That's mostly because he's perfected whatever problems are typically associated with the way this particular MR2 sits, starting back with MR2 number three. "Whenever something goes wrong, [there's a] big chance I know what it is," he says, "and it's something I've probably fixed before." Under-the-hood experience was also earned by way of those past Toyotas of his, experience chalked up mostly by way of a blown head gasket that led to an engine swap and, later, things like a bigger turbo and a clutch upgrade, the latter of which is no picnic thanks to the MR2's mid-engine layout and shoebox-sized engine bay. 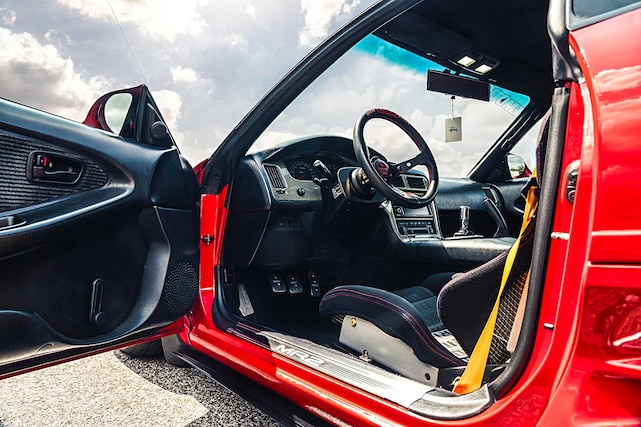 "[The MR2] was the first sports car I was ever able to drive, and I immediately fell in love with [it]," Johne says, talking specifically about the car's exotic lines—for the early '90s, at least—and its mid-engine, rear-wheel-drive configuration, which was and always has been a sort of anomaly for something of the MR2's price point. "I considered getting an Integra GS-R," he goes on to say, even mentioning an E46 M3, "but living in San Diego, [where] they seem to get stolen every minute, I didn't want to risk it." But it was dad who turned out to be more influential than any perceived carjackers. "Toyota has always been my father's favorite," he says. "All the cars we've owned [have been] Toyotas," like the MR2 pops owned when Johne first started driving and that made him want one of his own.

You might think Johne's finished with MR2 number four, but you'd be dead wrong. The unopened 3S-GTE that's now good for 339 whp thanks to the Precision turbo and Spearco intercooler is still a good 200 hp shy of what he's really hoping for. "It's a never-ending process," he says, but as far as the rest of the car goes, he concedes it's mostly how he wants it. Especially when it comes to the aluminum aero bits he whipped up himself, the suspension he's perfected by way of BC Racing shocks and Techno Toy Tuning control arms, and, last but not least, the Work Meister 3P wheels. "It's really hard to top off the Meisters."

"I learned a lot from watching him wrench on cars," Johne says about his dad, the man responsible for his allegiance to the mid-engine, rear-wheel-drive platform he's been conditioned to cherish. 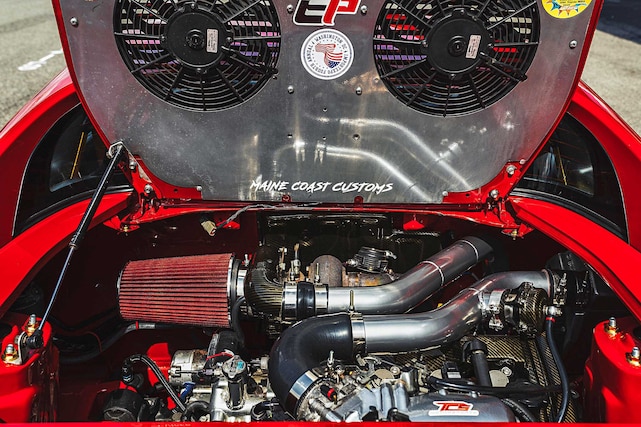 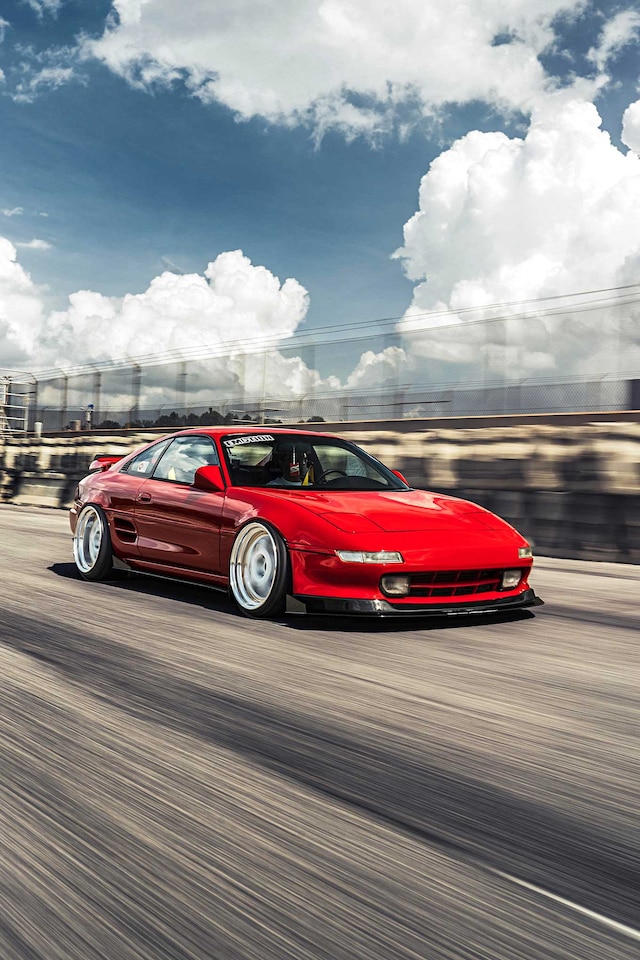 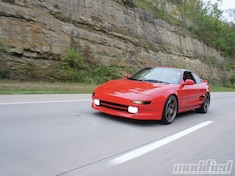 Although it would be a bit of a stretch to directly compare a MR2 to a Daytona prototype, or even a Ferrari, Robert Canter doesn’t care. At first glance, this car is very clean and subtle. Click to keep reading about Robert's 1991 Toyota MR2. - Modified Magazine

Check out this 1991 Toyota MR2 as it competes in the Ultimate Street Car Challenge with a 1MZ-FE 3.0-liter, DOHC, 24-valve Toyota V6 that was originally installed in the Camry, Solara, Avalon and ES300. - Sport Compact Car Magazine 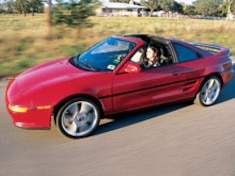 Check out how to turbocharge a 1991 Toyota MR2. Take a look at all the details and work here in this month's issue of Turbo & High-Tech Performance. 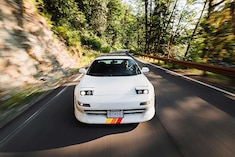