Over the top without going over the line 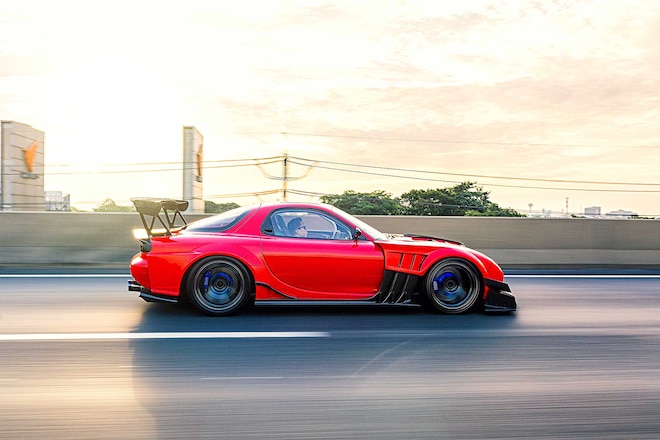 Less is more. Keep it simple. Go for an OEM look. All things said by those that appreciate simplicity and opt for upgrades that mimic an OEM-esque look and feel. Ice Sorsongsermkul, owner of this '93 RX-7, isn't trying to hear any of that. In fact, he's gone completely the opposite direction, and his never-ending spec list reads like a "who's who" of the tuning industry. 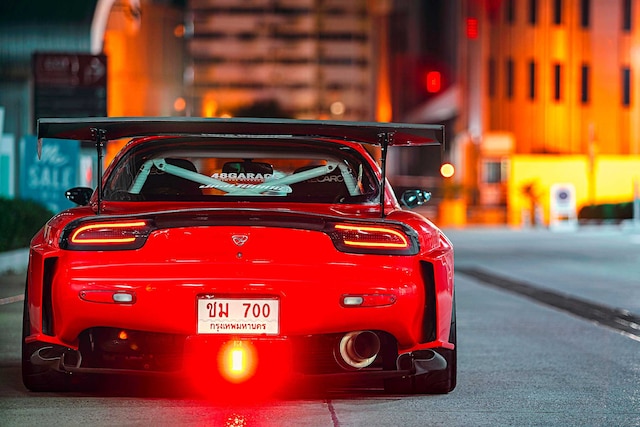 Here's the thing. Often times when a car owner starts throwing stacks of cash and various parts from different manufacturers at a car, opting to check off every single box on the aftermarket list, the build can end up looking more like a parts magnet rather than a well thought out combination of vision and execution. Fortunately, Ice knows what he's doing and that isn't the case here. His FD3S is painfully clean and unapologetically aggressive on the outside with the power to back it up. 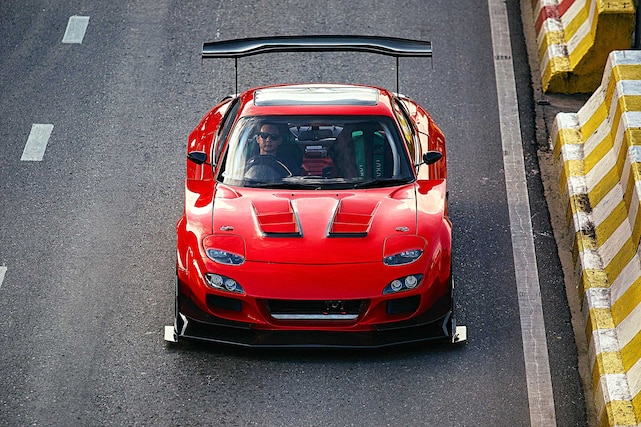 He came across his RX-7 through a friend that was serious about selling the car and moving on to something else. Because of their friendship, Ice was the first person he offered the car to and he jumped at the chance and got started on his version of the build by stripping down what the previous owner had done. Taking inspiration from high-level Time Attack builds the build was intended to cover all aspects of tuning while remaining street friendly. And, as Ice states, "I chose the RX-7 because no matter how much time passes, the FD3S still looks sexy with its timeless shape. When you see them on the road, they always get a lot of attention from people and Mazda's rotary sounds amazing and unique." 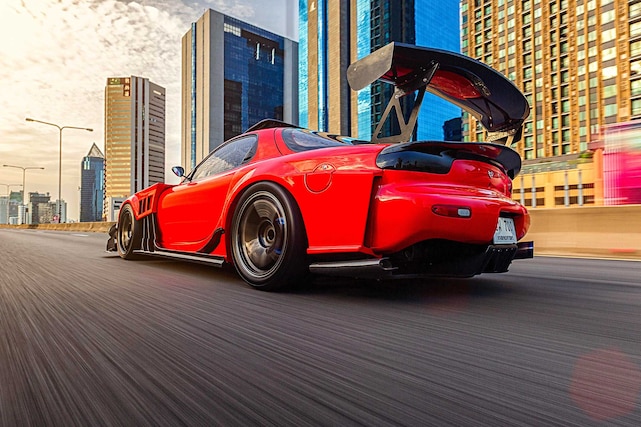 On the move, the bright red FD is a cruise missile; low slung, aerodynamic, and pumping plenty of power from its rotary heart. The height and stout ride is a result of Ohlins DFV coilovers matched with 12K Swift springs front and rear. Under the surface, the chassis is stiffened considerably by an exhaustive list of various bars and braces from the likes of ARC, Do Luck, Mazdaspeed and more. 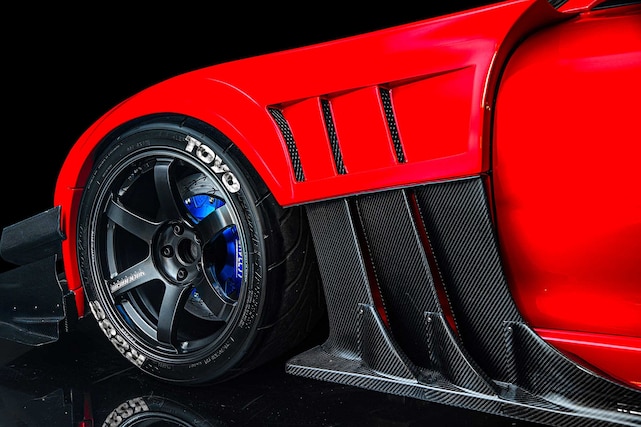 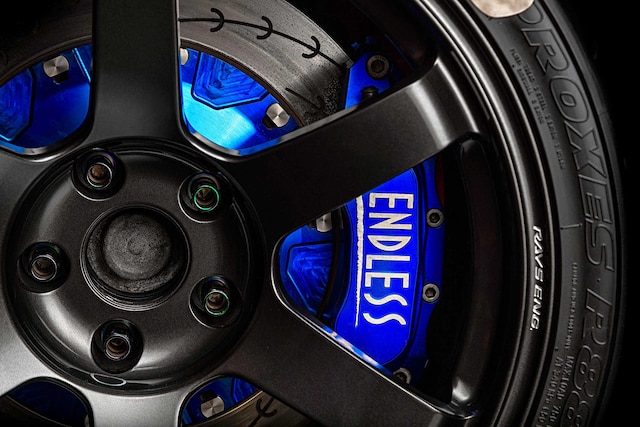 At the front fenders are 18x10.5 Volk TE37 Saga and in the rear, 18x11 versions all wrapped in Toyo's sticky R888R competition tire. Endless 6-pot calipers clamp down on 370mm rotors up front while their 4-pot calipers and 332mm rotor counterparts shed dust in the rear. The brakes might sound like overkill for such a lightweight car, but that's only because you haven't read about what's under the vented hood. 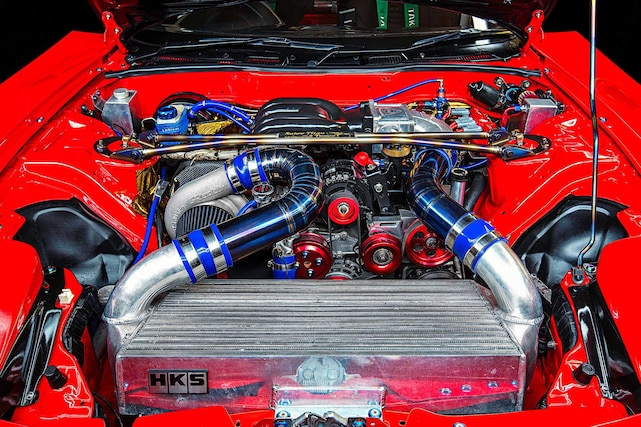 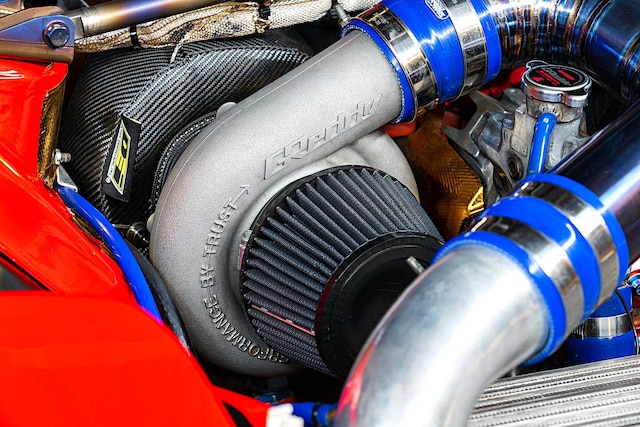 If this were built in the U.S., an LS swap would undoubtedly be on the list of possibilities for such an extreme build up. Although Ice lives in Bangkok, where wild swaps are done in all chassis types, he opted to stay with native 13B-REW power, but it's nowhere near the factory 250-ish horsepower it once put out. That's because the GReddy T88-34D replaced the original twin turbo setup and fuel increased substantially with dual Walbro pumps that feed ID1000 injectors. Airflow was further manipulated by a proper bridgeport and a Rotary Werks 90mm throttle body. 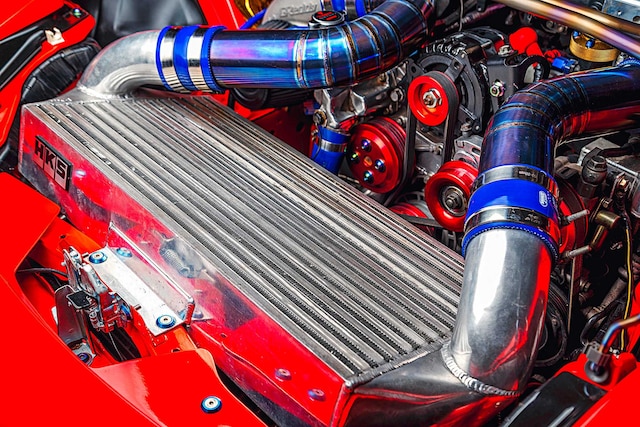 Up front, an HKS intercooler and custom radiator are positioned in a V-mount and use titanium piping. With some careful tuning by way of an HKS F Con V Pro version 3.3, the FD pounded out over 660hp on the rollers. In order to harness all of that rotary fury and unleash it without leaving a trail of clutch guts in its wake, an OS Giken twin plate clutch and flywheel and Mazdaspeed 2-way LSD were added along with a 4.3 final drive. 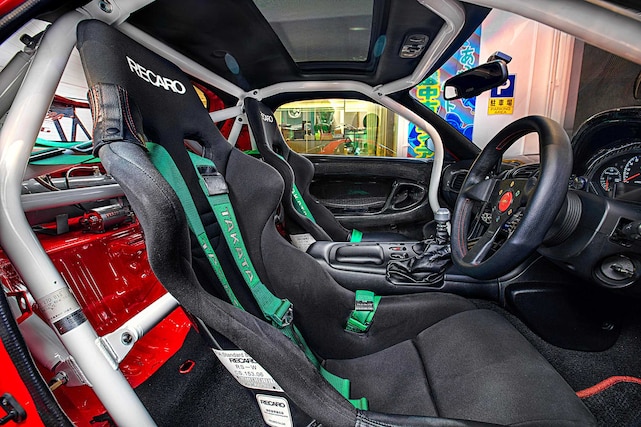 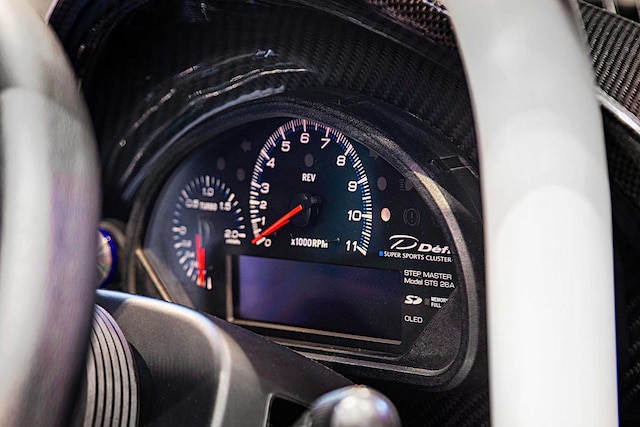 From the cockpit, a driver-centric attitude was taken with a set of Recaro buckets surrounded by a 13-point roll cage and carbon door panels. Sitting inside the gauge cluster area of the carbon dash is a DEFI Super Sports cluster just behind a Momo Monte Carlo. 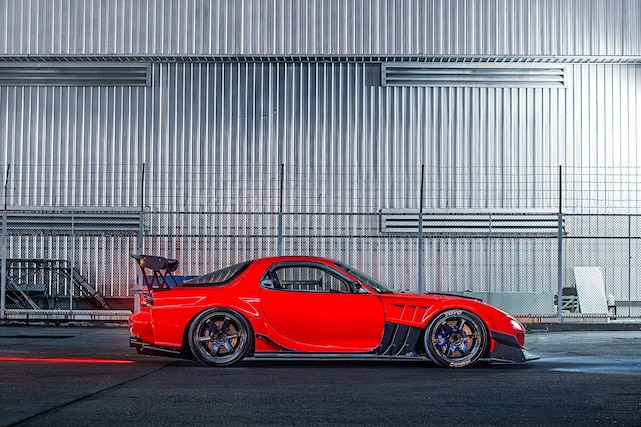 The slippery, sleek lines of Mazda's third generation RX-7 are iconic, but Ice wanted to bulk the dimensions up considerably and sourced a TCP Magic TT widebody kit and RE Amemiya carbon GT2 wing to do just that. He tagged RE again for the rear bowtech generator (diffuser) and carbon hood, then swapped out the stock headlights for R-Magic versions. The vented fenders and hood are functional but also offer some visual texture, while the carbon aero portions provide contrast against the bright red finish. 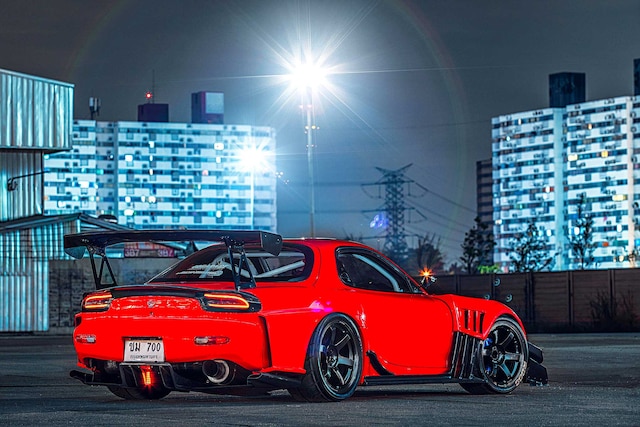 It's a combination that, again, on paper might sound like overkill, but browse through the various angles and you quickly realize just how good going over the top can be...when it's done the right way. 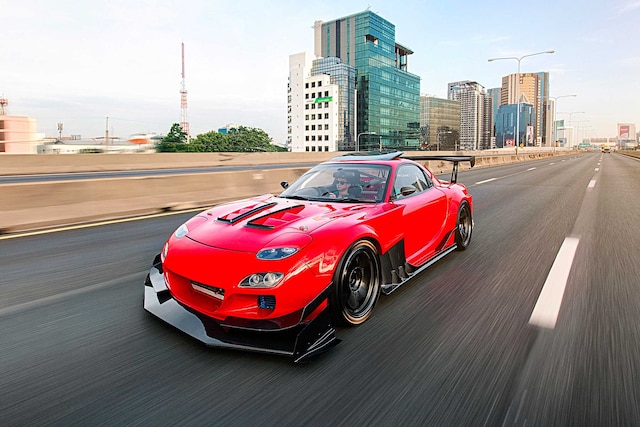 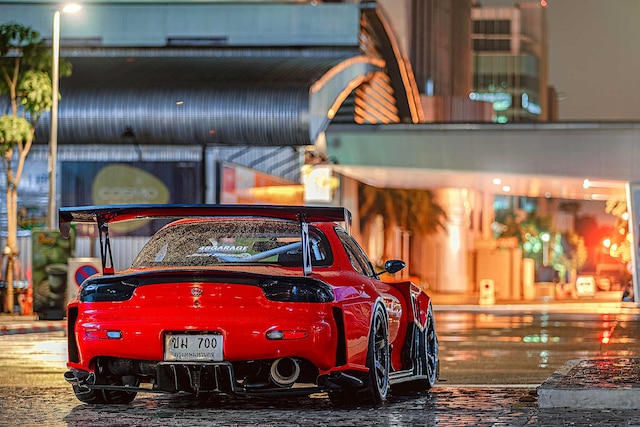 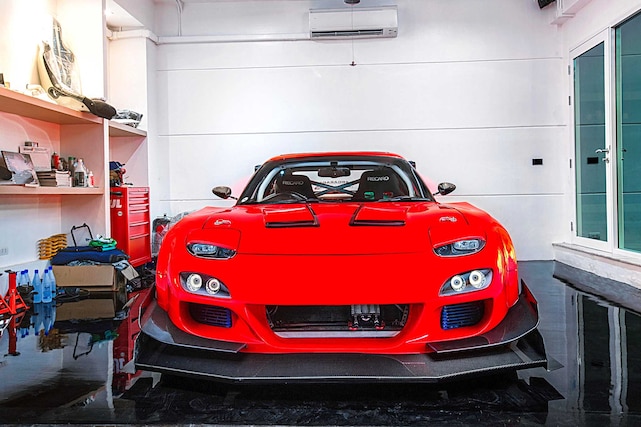 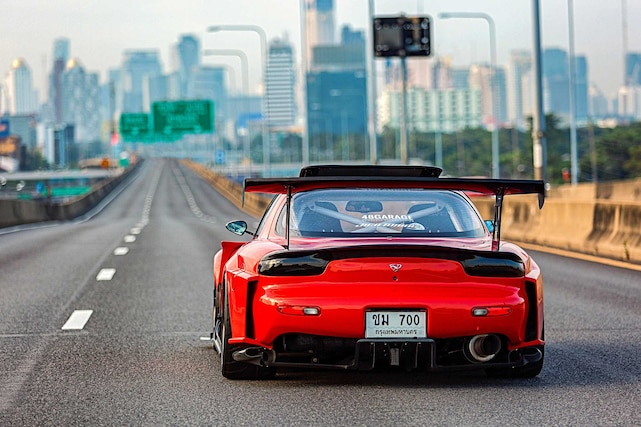