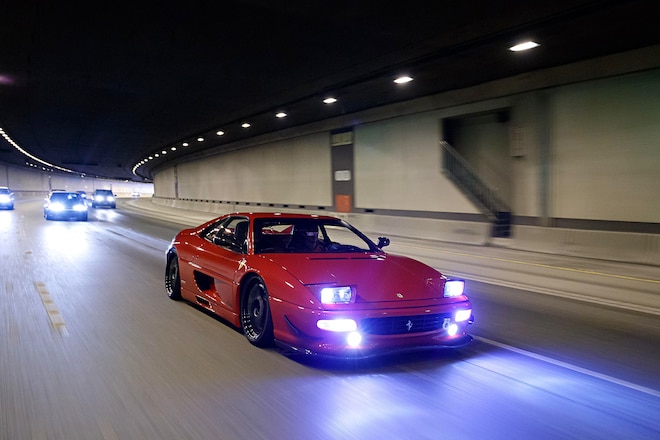 As I've crossed over to my early 40s, I've noticed a couple of things that seem to be very common with others in the same age bracket. We still really love the cars we grew up with, but now we're ready to reasonably test our financial limits. Point being: I love my Civic (always will), but I can't (and won't) drive it forever, and I'd like to add something a little more grown-up to the fleet. Common buzzwords thrown around include: ITR, any generation M3, something air-cooled or 997-up if it's water cooled, or some random European car. Dream cars of yesteryear that have become highly desirable but very pricey within the past few years, and for good reason: They remain timeless.

I can't speak for Ryan Dandurand entirely, but I get the feeling he thinks about cars similar to the way I do. Having owned a highly modified SW20 (second-gen) Toyota MR2 since the mid-'90s, he would later own several Porsches and M cars, but, according to him, they just started to lose their flavor after a while. "I didn't have a hypercar budget, and modestly priced sports cars were either no fun to drive or too difficult to tune," he says. "And since the world is full of RWB 911s and tuned R35s, I knew I had to stick with my '90s style and go on the hunt for something more visceral, exciting, and within my budget." After two years of searching, Ryan likes to say the Ferrari 355 found him. 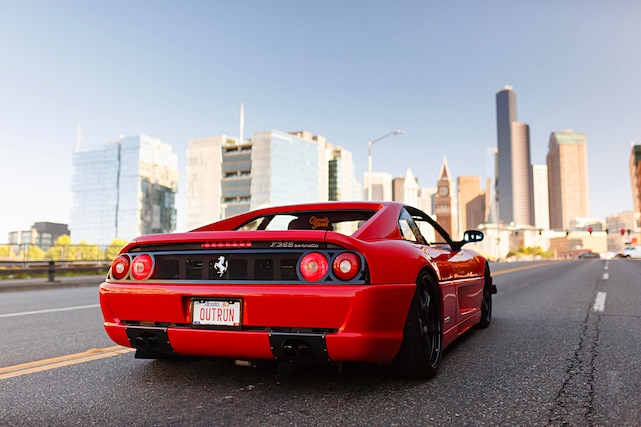 There's this scene in the Nicholas Cage version of Gone in 60 Seconds during which Cage's character, Memphis Raines, cases a Ferrari dealership for a score. Roger, the car salesperson, indulges his desires, agreeing that if he were to drive a '67 275 GTB, he wouldn't be a self-indulgent wiener, but instead a connoisseur. "Precisely! Champagne would fall from the heavens. Doors would open. Velvet ropes would part." The GTB is stolen later that night, along with many other sought-after vehicles that are to be delivered in order to save his younger brother. What does this have to do with Ryan's F355? Actually, nothing...akin to what he knew about the car when he first bought it. "I didn't know much about the car and its tendencies," he says. "I just knew [Cage] liked to steal them in Jerry Bruckheimer movies." This is probably a good point in the story to segue to its modifications.

First on Ryan's list: replacing the factory headers. They're known to melt, and the engine then sucks up pieces of the melted metal, which can potentially lead to catastrophic failure. He upgraded with Fabspeed headers and had a Tubi exhaust, Capristo test pipes, and Fabspeed carbon intake boxes bolted on. "It absolutely screams now—sounds like an old F1 car," he says with a smile. 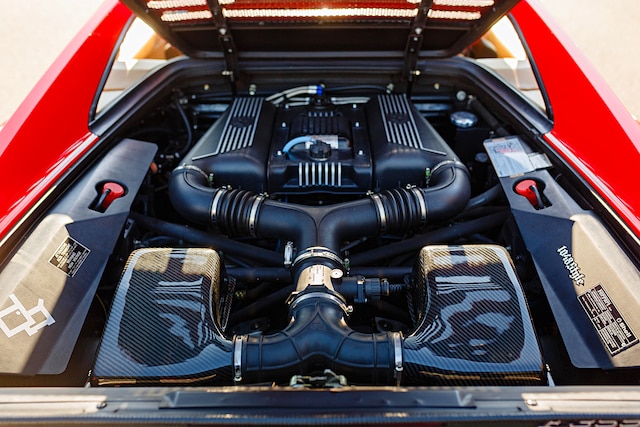 Looking to get the F355 a "little" lower to the pavement, Ryan looked to Ferrari Challenge, a performance/racing division of Ferrari, for suspension components. "You can actually buy [Ferrari Challenge] parts from the dealer," he explains. "Unfortunately, Ferrari forgets about your car after 15 years, so parts for older cars have to be acquired online, typically from Italian websites or Yahoo Japan." He was able to source a set of dampers and match them to H&R performance springs, finally bringing the ride height down low. Wheels were equally tricky; the 5x108 bolt pattern doesn't give much in the way of options, except for BBS or Ferrari Challenge Speedline wheels, both of which are far too common for 355 enthusiasts. A local shop suggested he contact Work Wheels Japan, which was more than willing. "I had to guesstimate the width and offsets," Ryan explains. "I didn't want them sunken in like OEM wheels, but I didn't want to risk any damage to the fenders by going too flush with the wheel wells." The black Meister S1Rs with gloss lips and satin spokes became an instant complement to the overall look of Ryan's 'Rari.

As this model is noted by Ferrari purists as being one of the best looking from the famous Italian stable, it's hard to mess with perfection. Go too far, and it can easily begin to look like "an MR2 with a bad body kit." As a fan of exotic Japanese tuning companies like Anjia and 1048style, Ryan wanted to make sure most of the exterior mods were Japanese, not to mention freshening the 18-year-old Rosso Corsa paint. He says, "Ferrari doesn't make disassembly of its cars easy. Dan at Screamin' Paintworks took on a job that most shops would turn down. The front fenders are spot-welded on, many bolts are near impossible to reach and require special tools to remove, and if a trim piece breaks, chances are it's discontinued and can't be replaced." Over a year's time, Dan had the 355 disassembled, and Ryan brought him more dead-stock Ferrari Challenge parts, such as carbon front and rear bumpers (good for taking 80 pounds off) and several other JDM pieces, including M-Tecnologia Japan carbon aero, JDM Ferrari clear corners, and carbon canards from Rize Japan. 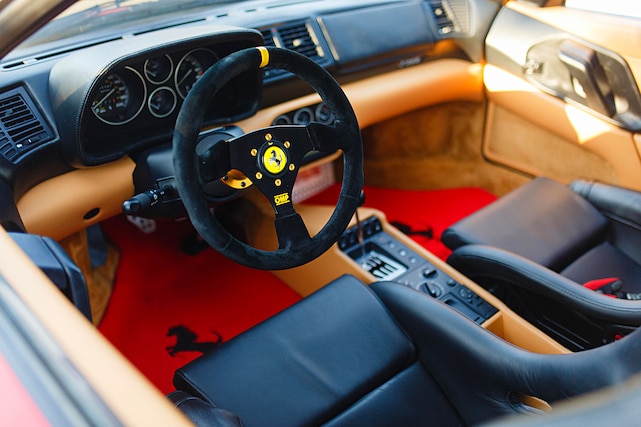 Within the 355 world, the Berlinetta hard top with three pedals and Rosso Corsa red and tan interior is the "it" car, and, as a general rule of thumb, most Ferrari owners leave their cars untouched in an effort to protect their resale value. But Ryan isn't here to please Concours crowds. "I love making cars my own. A little imagination took my 355 as far as you see it now. See that Super Street sticker on the windshield? It's there for a reason." 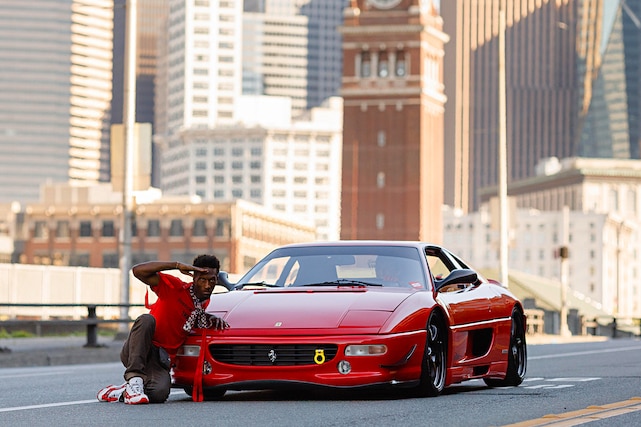 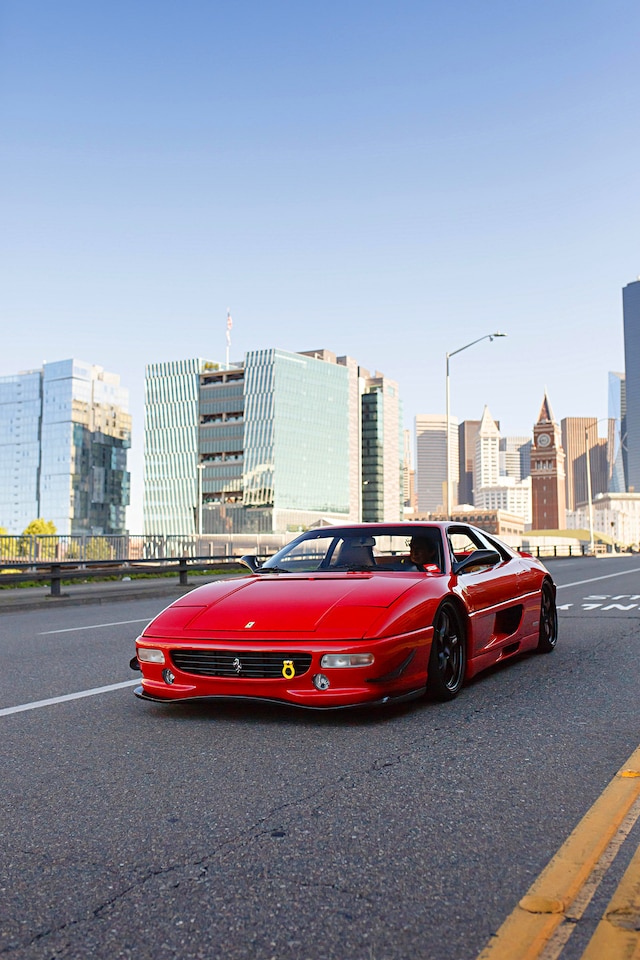 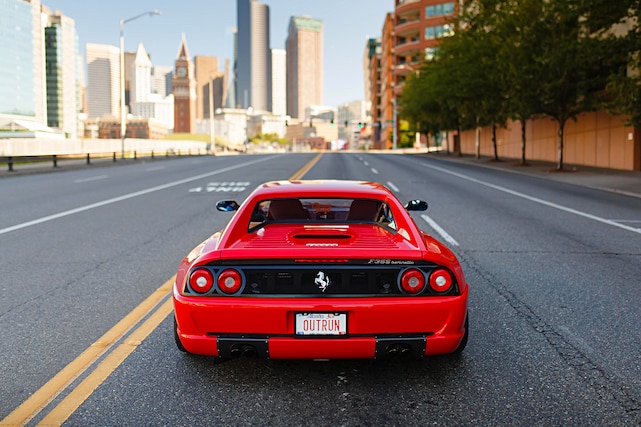