Home  |  Features  |  Forgeline Wheels - Born in the U.S.A.
Subscribe to the Free

Forgeline Wheels - Born in the U.S.A.

Behind closed doors at Forgeline, one of America's most reputable and race-proven wheel manufacturers 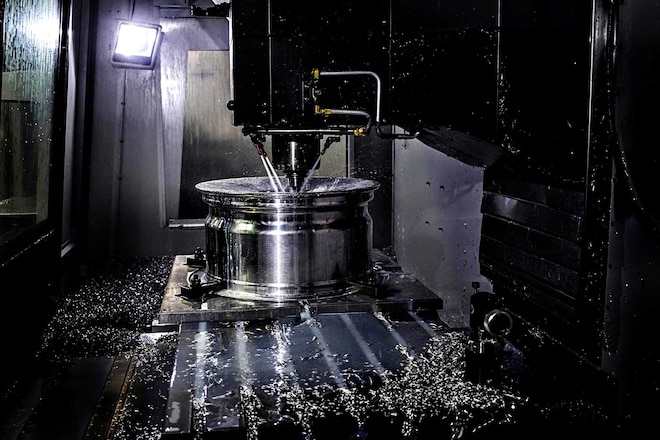 Tucked within the confines of an abandoned bowling alley on the industrial end of Dayton, Ohio, rests a manufacturing revolution that's been repurposed into a global nameplate. Known within the racing community as one of the most reputable brands in alloy wheel production—while retaining a street status that borders on being echelon in nature—this family-owned enterprise epitomizes the American dream. There's only one name that identifies this brand for what it truly is, simultaneously earmarking it as an American icon: Forgeline. 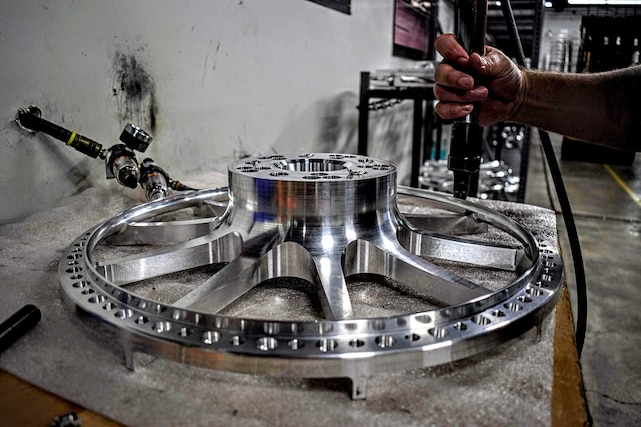 What began as a man merely trying to save a wire wheel company from going under in the '60s has transformed into a powerhouse for all things alloy, with a grassroots, family-focused approach to running a business being the driving force behind it all. We recently caught up with the twin brothers who followed in their father's footsteps and were able to get an exclusive look at how the company was built, and, more importantly, the way in which each Forgeline wheel is manufactured.

The first thing brought to our attention regarding Forgeline was the amount of time spent on each wheel. It's borderline extremism. Regardless of whether it is in the design, engineering, manufacturing, polishing, assembly, selling, or marketing side of the equation, there's a motherload of attention focused on making sure the buyer experience is just as flawless and bespoke as the products being purchased. 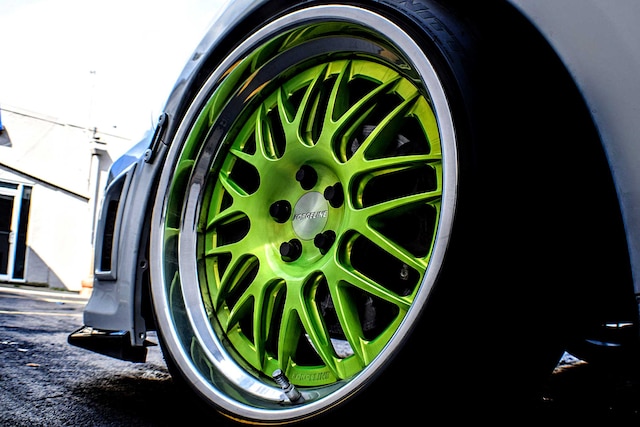 But before the wheel can even get to the machining stage, the vehicle's owner has to first converse with the Forgeline sales department, and then with an engineer in order to guarantee he is getting precisely what he wants. Every little request and detail is scrutinized to ensure specific needs are met. Since a vast number of sales remain directed toward the racing community, followed by custom street and show builds, a lot of time is spent going back and forth with the customer over vehicle specs, future mods, brake clearance, and so forth. This creates an elongated checklist that's time-consuming but leaves zero room for error.

With all the proverbial groundwork laid, an American-made, heat-treated 6061-T6 blank aluminum disc that's been forged on a 6,000-ton hydraulic press gets put into play. Designed, blueprinted, and engineered per order, each wheel is carved out of these lightweight lumps of aluminum via Haas VF-5 machines—some of the industry's most cutting-edge CNC equipment. Being that each wheel is basically a one-off, every third set requires a different fitment, forging, step lip, PCD, finish, and so forth. The Forgeline team is constantly swapping out tooling components in order to make the next set of alloys a reality. It's a tedious process, but it's one that reduces the risk of inconsistencies associated with mass production. 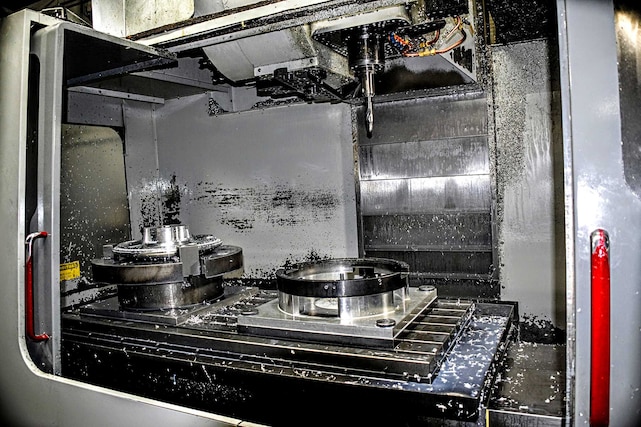 This level of care continues following the machining stage, as each wheel gets de-burred, brush-finished, and polished by hand. From there, it's off to powder coat, and, if the wheel is of three-piece construction, final assembly. While powder coating craftsmen spray pigments across forged faces, a team of specialists outfit split-spoke, three-piece wheels with Forgeline-exclusive ARP titanium hardware. We're not over-exaggerating when we say you're only going to find American components and materials here, either. From raw forgings and blank barrels to the carbon-fiber, hardware, and center caps used on a daily basis, it's 100 percent U.S.-made or nothing here at Forgeline.

It's also worth noting that Forgeline remains the only wheel manufacturer in America to utilize helicoils on all its multi-piece wheels. Out on the track, bent barrels and wheel-to-wheel contact occur more often than any race team would care to admit, thus making disassembly and repair a constant consideration. The decision to add this time-consuming yet incredibly simple step to the assembly process was made back in 2005 to facilitate both easy hardware removal and mar-free reassembly. Helicoils are completely pointless on through-bolt applications, though, in which the bolt completely penetrates the rim register and is visible from the front of the wheel, with an attached nut on the back. These miniature metal coils only come into play when assembling "blind bolt" or hidden hardware applications, in which the bolt threads in from the back and is not visible from the front. On these products there is no nut, so the hardware must thread into the wheel itself, a design that caused Forgeline to pursue the use of hidden hardware, and, in turn, the helicoil itself. 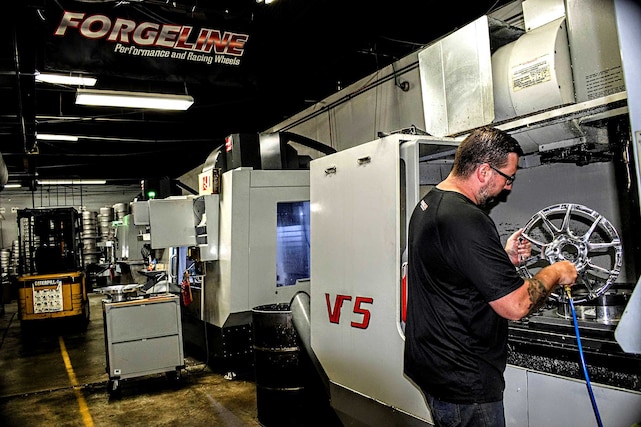 The brand has also seen a demand shifting toward carbon barrels over traditionally forged aluminum designs. They're about 42 percent lighter and far stronger than their metal alternative. Ever accidentally clip a curb or rock a rumble strip the wrong way? Bends occur in forged barrels. Carbon merely stretches and bounces back!

A set of Forgelines is far from cheap, and pricing per wheel can range anywhere from $1,300 to $3,875. These definitely aren't your typical off-the-shelf wheels, but then again, Forgeline has never strived to cater to the typical enthusiast, consequently making them an option for anyone seeking superior strength and exclusivity. 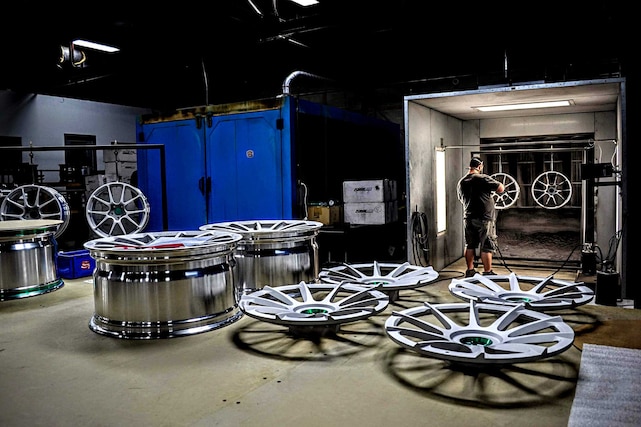 Oh, and let's not forget the brand has been the official wheel of IMSA and Pirelli World Challenge for several years. Even Scuderia Cameron Glickenhaus buys exclusively from Forgeline in order to shod its multimillion-dollar supercar with forged hooves, something few people would expect from such a small company. Despite these accomplishments, the folks at Forgeline retain an incredibly humble attitude. Being family owned, with fewer than 30 employees, the company has never been built around profit—but upon passion. There's no fancy showroom or ritzy receptionist desk here. Hell, there isn't even a sign out front. Instead, you get an abandoned bowling alley with a decal on the door that's been filled with the world's best equipment and forgings, all overseen by some of the most brilliant minds in the wheel biz. It may not be what one might expect based upon face value, but the fellas at Forgeline wouldn't have it any other way. 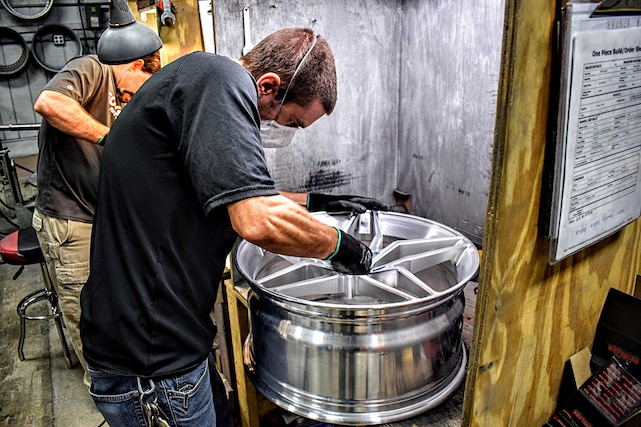 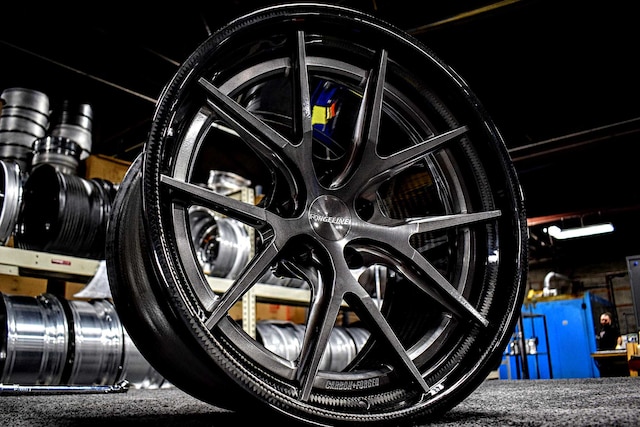 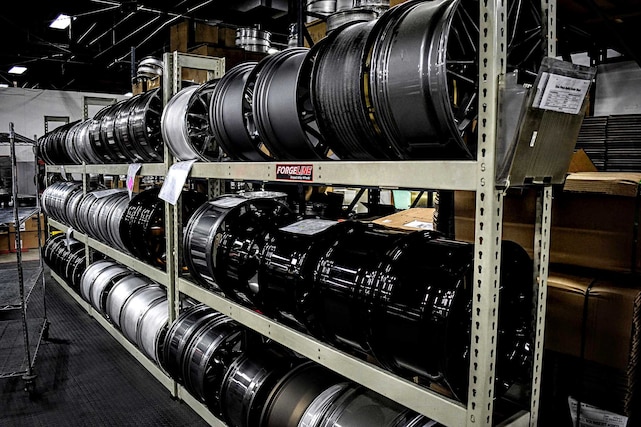