510 and JDM Legends: Shall we drop the mic now? 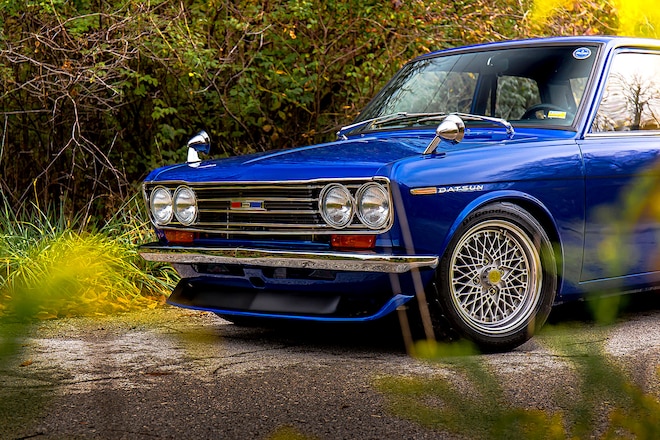 You know very well the mere mention of JDM Legends will mean something crazy good is about to cross your path. It will be a car that has been restored to beyond pristine with attention to detail few can rival, and the very embodiment of how we define "special" within the car community. Let's call this 510 what it obviously is: a one-of-a-kind treasure. 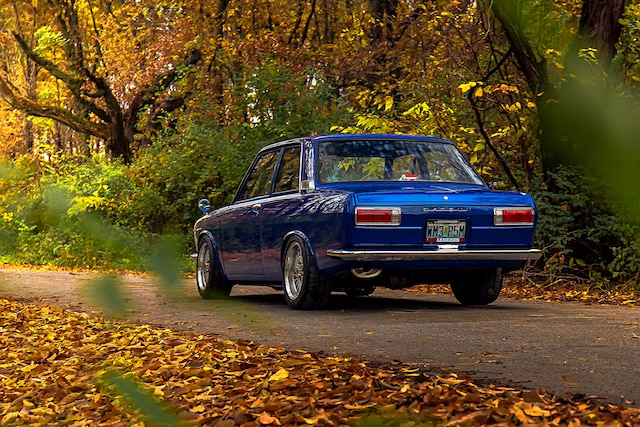 Those who approach JDM Legends come from far and wide for the company's restoration prowess and knowledge. It may take months (oftentimes longer) to complete your project, but what you want is perfection. But this 510 wasn't brought to the JDM team in need of revival; instead, Eric Bizek sourced it locally in Utah of all places, and it had already been disassembled with the intention of restoration yet never made it past the teardown stage. "Once the scale of restoration is realized, it can be hard following through the entire process," Eric says. "We picked up this car without a client because we knew it was a great candidate [for restoration] although we had our work cut out for us."

But client-less didn't last for long. In a few weeks, Chris Alvarado came looking for a 510 restoration, so JDML obliged and sold the car to him. The collaboration process began immediately. "Chris is active in SCCA, so he knew he wanted something that was light, powerful, and could handle," Eric explains. "But being his first restoration project, he also wanted the car to stay true to its classic styling and the characteristics that made it so great." It started off period-correct, but after painting it various shades of traditional white without success, Chris decided to go a completely different route with the Aston Martin blue hue it sports now. Though it might seem like a standard JDML colorway, Eric assures us this is a decision that's left entirely to the owner, although they try to find a color that accentuates the bodywork that Cio's puts into it. 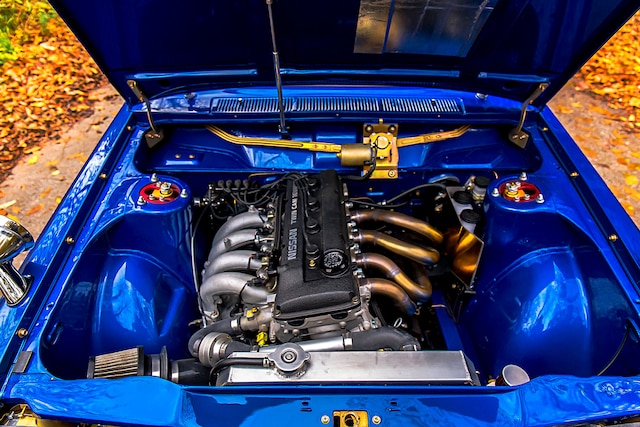 As JDML states time and time again, picking up a project that's started by someone else can be difficult to complete, especially when the most important parts are the ones you've hoped the previous owner has made sure were included in the sale. What makes this 510 particularly difficult to work on is the '68 is the one model year variation that features a unique "bus windshield wiper" design, grille, side markers, taillights, door cards, and dashboard. "We spent a great deal of time tracking down parts from all around the world to keep it as '68-correct as possible," Eric says. "This is also what makes this car so special in the first place." JDML applied thoughtful restoration techniques to the interior as well, using parts and materials that accentuate the original 510 design without looking out of place, such as the carpet, seats, and illumination of the Defi gauges that match the original cluster (green, in case you were wondering).

The true highlight of Chris' build is what lies in the engine bay. At first glance, it might seem like a common KA swap, but it's far from it. Built by Dave Rebello of the infamous Rebello Racing, this is a Frankenstein swap that's meant to provide a twin-cam cylinder head for a 510 (think OS Giken's TC-16 without the price tag) while remaining with the L-series bottom end. "The Z24 bottom end was found in earlier Datsun 720 pickup trucks," Eric explains. "Theoretically, it would allow us to use the existing motor mounts and any L-series transmission, making it more of a drop-in modification. But this motor has a more abnormal lean compared to a typical KA. To remedy this, we needed one custom motor mount and added more clearance for the intake manifold." Off-the-shelf parts aren't available for this setup, either, so JDML fabricated a custom equal-length stainless header with a matching exhaust system. It's capable of pushing 245 hp at the crank but also delivers an impressive 238 lb-ft of torque, which JDML says "is more than we've ever experienced from a four-cylinder engine." In a sub-2,100-pound rear-wheel-drive chassis, you can imagine how much fun driving this 510 is—especially since it has 150 hp more than it did in factory form. 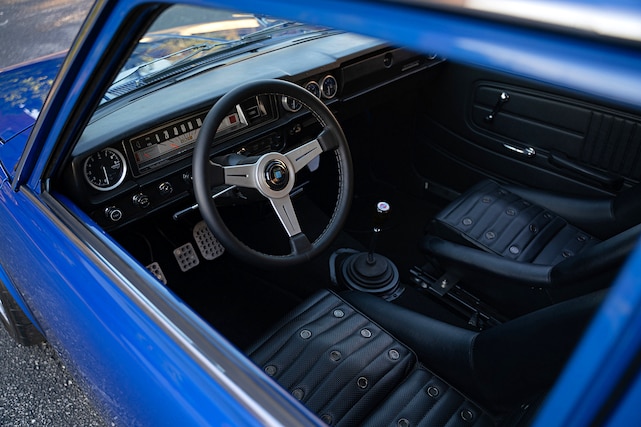 Thanks to Eric and JDM Legends, Chris can enjoy his 510 knowing it's been built to retain its historic past but with technology of the future to ensure it won't feel as if it's stuck in the '60s when being driven. Eric adds, "It's too easy to build a car for shock value. When you focus on timeless modifications, it'll remain as relevant in 25 years as it is today. Improve upon what made the 510 so great in the first place, but don't lose its original DNA in the process."

DOWN TO THE FRAME 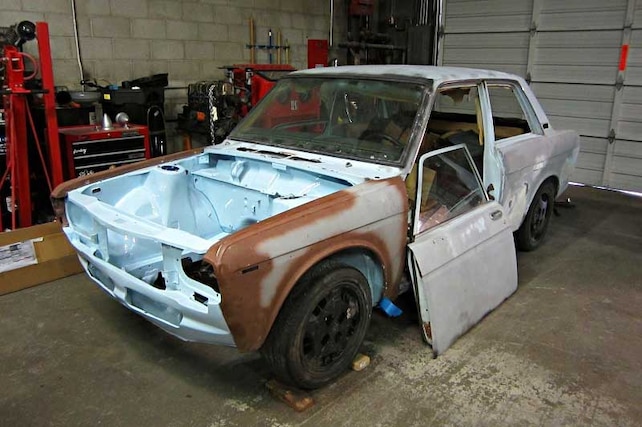 In true JDM Legends style, this 510 was torn completely apart and built from the frame up. It features plenty of its original '68 DNA, plus a unique motor setup. It appears to be a popular KA24DE from an S13 at first glance, but it actually has a Z24 bottom end from a Datsun 720 pickup. With higher compression and larger cams, this little 510 makes close to 250 hp. 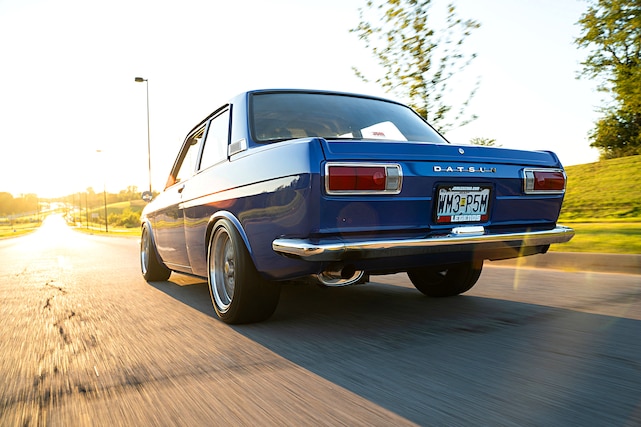 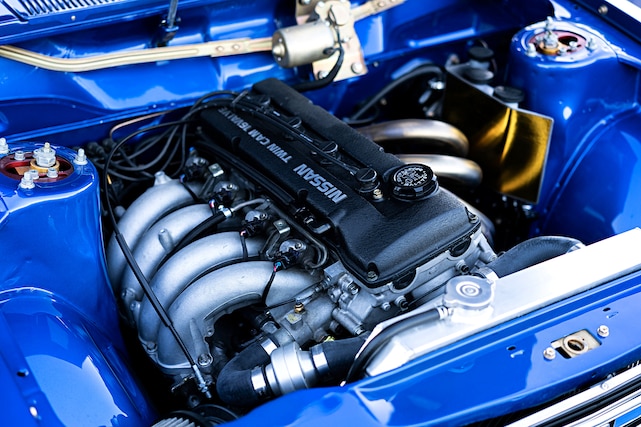 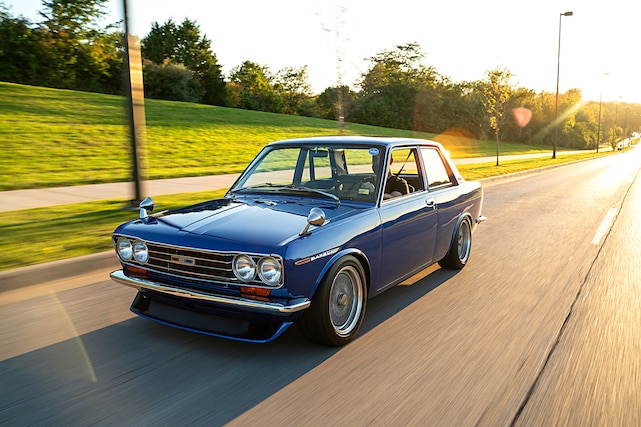