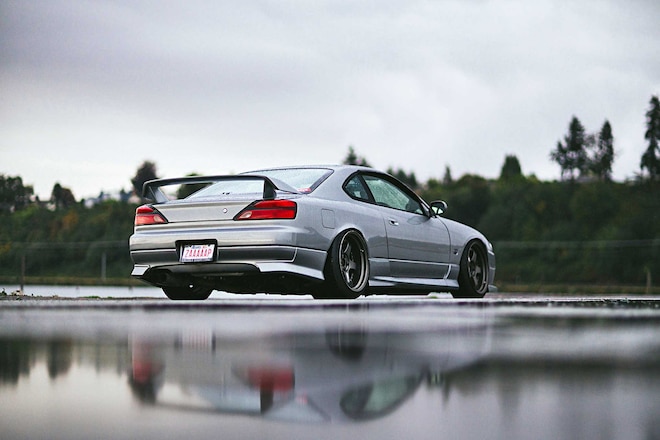 Serendipity | noun | ser·en·dip·i·ty | \ ·ser-ən-'di-pə-tė \ The faculty or phenomenon of finding valuable or agreeable things not sought for.

Eric Zapata never planned on owning Nissan's heavily sought after S15. His '89 S13 had served him well for the better part of five years, and for the most part the Calgary native had been happy with its progress. From a bone-stock SR start to an aero-equipped, 1JZ-powered finish, the S13 was a dream machine for the guy. But the chassis was also beaten to hell and back, and with a house and a wife taking priority, the old 240SX was parted out for "adulting purposes." 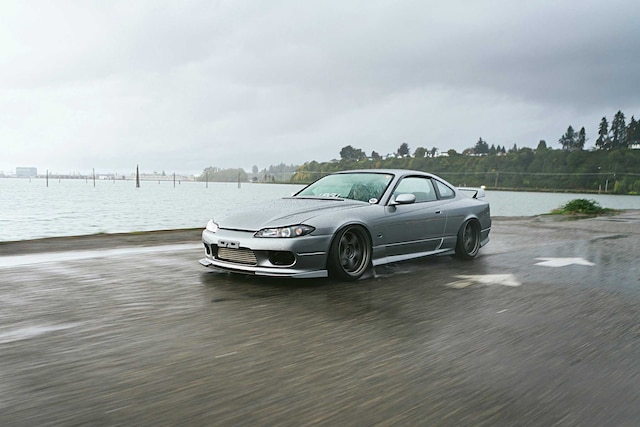 Time passed, until one fateful day Eric's friend and owner of local import specialty shop, JDM Source, introduced the Nissan enthusiast to a vehicle he had never encountered before. A fresh shipment of Japanese cars had just arrived, and the shop was packed with performance options. From an S14 and a 180SX Type-X to the coveted R32 and R33 Godzilla nameplates, they were all there, including a pair of S15 Silvias. Eric had never seen an S15 in person, but despite his immediate attraction to the chassis, he remained determined to walk out with little more than the T-shirt he had intended to buy.

But the shop owner had different intentions, quickly pulling Eric aside and offering him the silver Spec S with its undesirable SR20DE engine for one helluva price. Leaving the shop with a fully priced shirt and a heavily discounted Silvia S15, Eric returned home, the word "serendipity" swirling around in his skull. 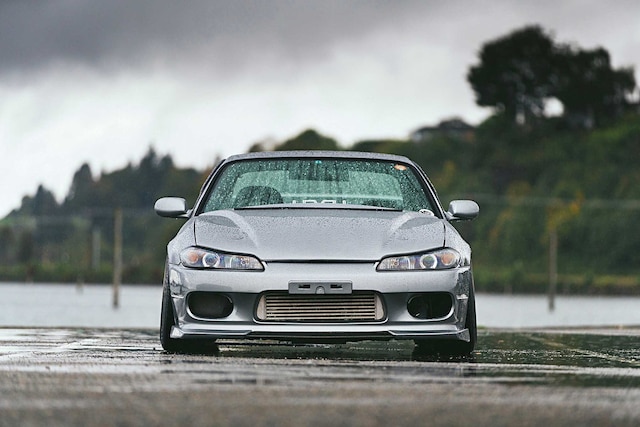 By the time he got home, Eric knew the naturally aspirated SR was going to get the boot and that his S13's old 1JZ was going to be its replacement. At the time, the S15 was fairly new as a sanctioned Canadian import, and there wasn't too much info on 1JZ swaps. As luck would have it, the S chassis shares the same engine mount points regardless of generation, and Eric remained fairly confident his current setup would work with just a bit of tweaking. 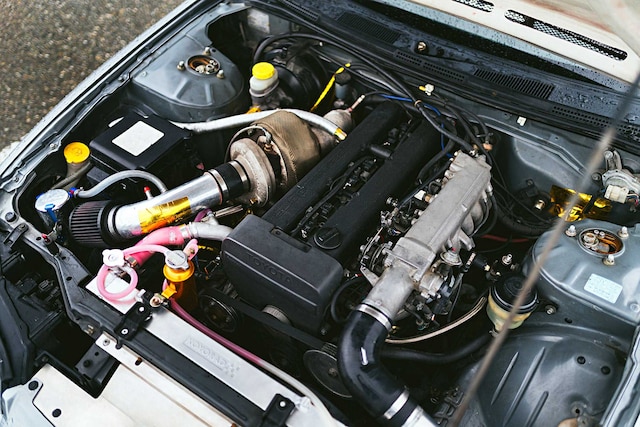 Serendipity struck again when Touge Factory of Chicago secured sponsorship for Eric via Stance suspension components—custom coilovers supporting the additional 1JZ weight up front, along with arms and bushings out back. With the suspension installed, Panic Wire stepped in to supply a "better-than-new" engine harness in order to make the swap literally a plug-and-play affair. 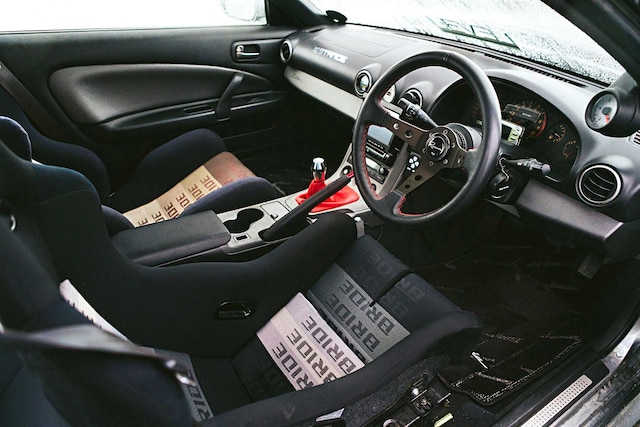 From there, Xcessive Manufacturing mounts were sourced, along with a specialized skidplate for protecting the low-hanging oil pan of the 1JZ. After that, it was on to the swap itself, with the motor and transmission going in without a hitch. Although a new driveshaft had to be manufactured, Eric admits this swap was about as painless as it gets when considering what "cross-pollinating" automaker powertrains typically entails. 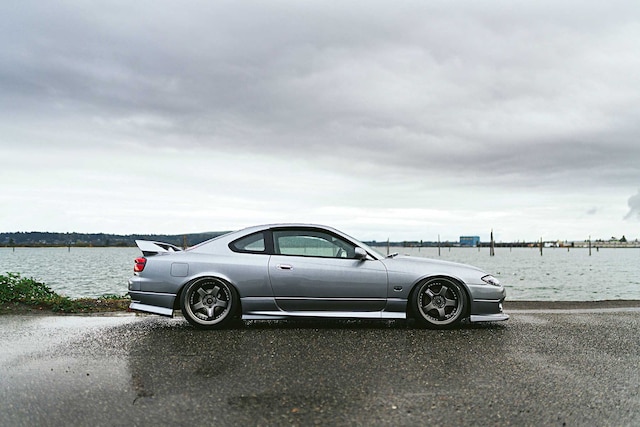 Cabin appointments were an easy affair as well, since a bunch of aftermarket components from the S13 swapped into the S15 without issue, including Eric's old seats and rails. But there was a lot that had been associated with his old chassis that didn't make the cut. Eric admits his end goal for this build wasn't to go "big and gaudy" like his previous build, but instead keep as much stock metal on the car as possible and then lower the living hell out of it. Subtleties were what was going to make this car special, and there was a reason for all the secrecy.

At the time, no one knew Eric had purchased an S15, save for a handful of close friends and the boss lady back home. While keeping the fact that he had one of the first 1JZ-swapped S15s in North America under wraps was a headache at times, getting the vehicle rolling under its own power was proving to be quite the migraine. After a few late nights hastily fussing with the intercooler and its piping, Eric made the executive decision to not rush things in order to get it right the first time. With this fresh approach to taking it slow, the build suddenly went a whole lot smoother. At least, all the way up until it was time for a tune. 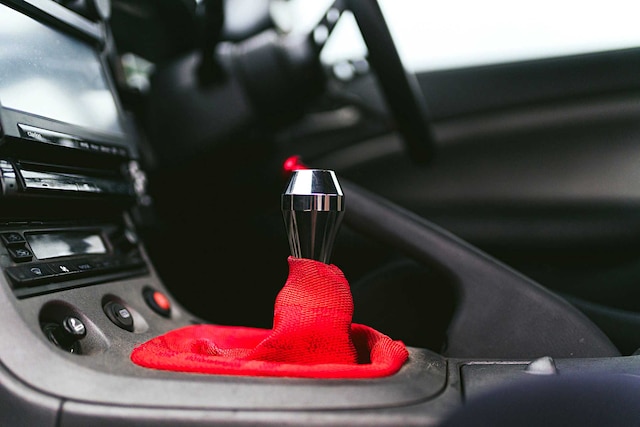 Black Bird Technical Service had been tapped as Eric's preferred tuning solution, and after half a day of fiddling, the shop discovered the car was leaning-out during power pulls. Eric immediately made his way to the shop after work, where he was allowed to tear it apart in order to figure out what had gone wrong. After swapping fuel pumps and combing over the S15's fuel lines and fuel pressure regulator, it became obvious there was a blockage somewhere, which meant clearing the lines with a pressurized air hose. Mercifully, this solved the problem, and the S15 returned to the dyno for more. 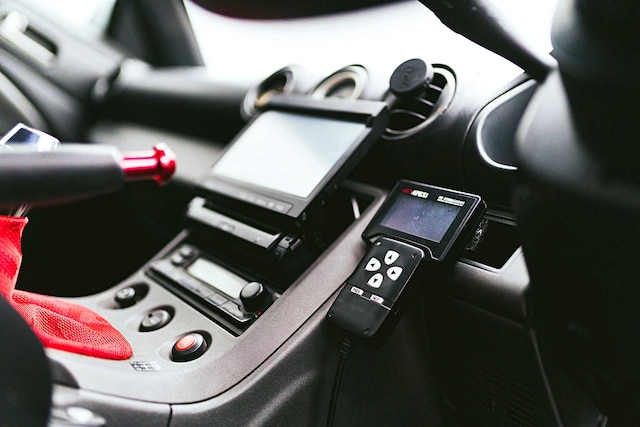 All told, tuning took a full two days to complete, with the final run relinquishing a healthy 391 whp and 365 lb-ft of torque on low boost, thus providing faster spool-up and safer long-term operation. Tuning complete, Eric drove the car to Vancouver Island the next day, a 14-hour trek that helped both break in the unorthodox swap and allow him to hit some twisty mountain roads in the process. 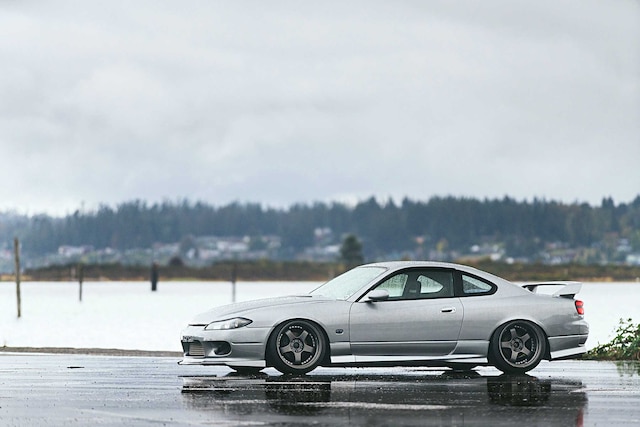 After completing the drive without issue, Eric came to an important realization: This machine was like a dream compared to his old S13 setup, which he had to constantly battle instead of working in tandem with. He was madly in love with what he built, and Mr. Zapata was determined to make it even better. 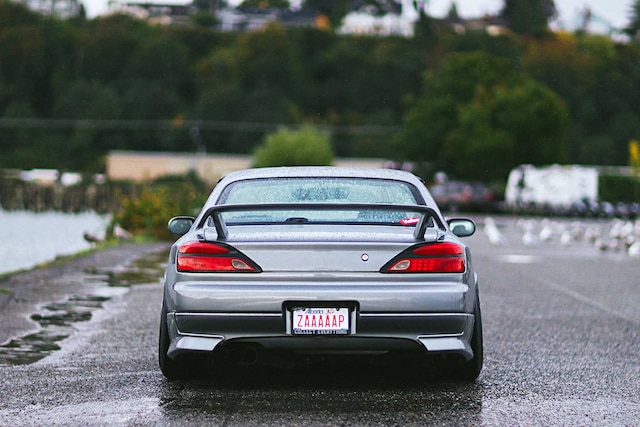 But after force-fitting some Work T7R wheels onto the car, Eric was suddenly facing some serious body and paint problems, all just a few months ahead of the 2018 Wekfest Seattle. After countless hours of massaging sheetmetal, adjusting ride height and prepping the car for paint quickly became priorities. Once complete, the car went in for a fresh slathering of silver, sprayed twice within the span of a week due to a pigment mismatch issue. The S15 was finally ready for the 12-hour drive to Wekfest, and Eric was downright giddy with anticipation.

Things didn't go so well the next day, though, as the Northwestern portion of North America convulsed beneath the heel of some of the hottest temps in recent history. What was supposed to be a smooth highway cruise with some of the coolest cars Calgary has to offer quickly turned into a scorching hot mess. Gridlocked traffic, interstate closures, wildfires, rerouting woes, and the convoy splitting up amidst it all had turned the 12-hour cruise into a 20-hour survival race to the finish line. 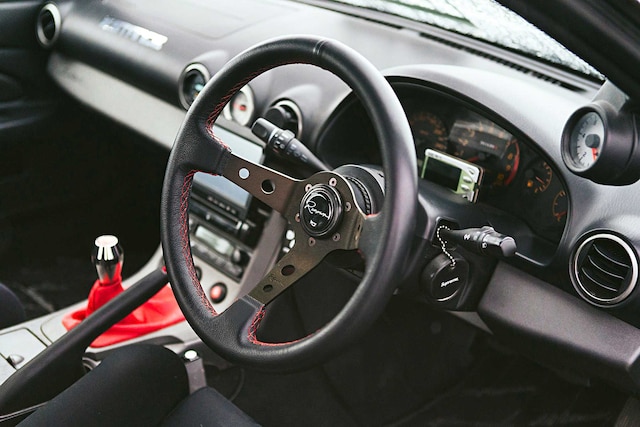 Nevertheless, Eric admits there was a silver lining to all the bedlam, as one of the detours took him straight through Leavenworth, a picturesque German-themed town he'd only seen online. While the drive that day was stressful, Eric admits that hitting those twisting mountain passes was a personal highlight, offering a much-needed break from the lame straight lines of the interstate. 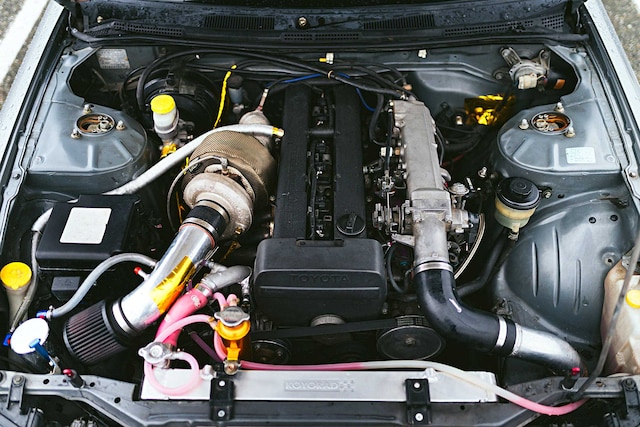 Driving headaches aside, the show ended up being a huge success for the LEVELone car club, with various team members taking home awards. Eric's S15 landed him "Best S Chassis" that day, an honor he never expected but happily accepted. With the entire team riding high on their laurels and the drive home being surprisingly uneventful, the nightmare road trip to Wekfest turned into a dream come true for both Eric and his fellow aftermarket enthusiasts. 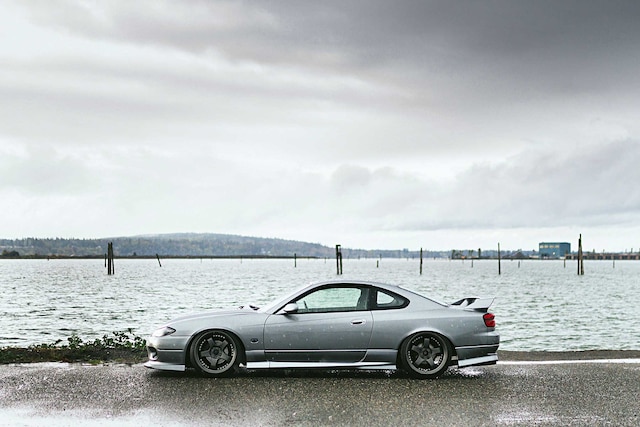 After that, it was on to shooting the car for this feature, which, due to it being staged in Seattle, gave way to an amusing closing anecdote. While crossing the border, this time with the freshly sprayed S15 on a trailer, Eric was forced to explain why he was crossing into America. The border guards found it hard to believe that someone would be willing to travel that far for a photo shoot, at which point the car's owner had to go to great lengths to explain the significance of being featured in Super Street.

Serendipity smiled one more time, allowing both Eric Zapata and his pristine Nissan Silvia to pass into the jolly old U.S. of A. and into SS. So, keep your eyes peeled, because we don't think she's done bestowing her fortuitous blessings on this vehicle and its lucky owner. 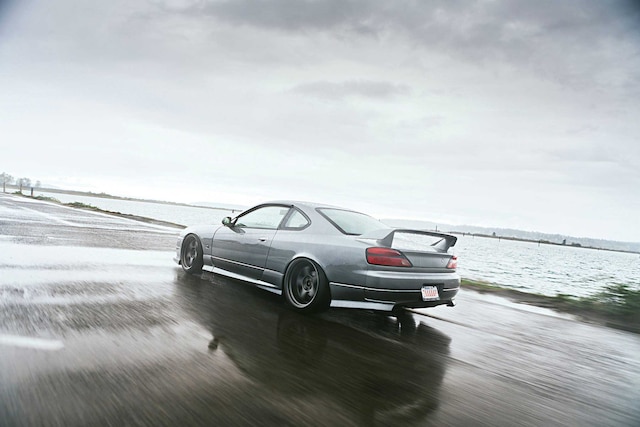 Eric drew a lot of inspiration for his build from Hiroshima-based drift sensation "Team Review." Sporting incredibly low cars that somehow remain 100 percent functional, these guys don't just set coilovers to the lowest possible setting—they go as far as modding floorpans and undercarriages in order to remain as functional as possible. The build pictured here was meant to embody what Eric saw in Team Review member Shota's S15, complete with matching T7Rs, wheels both of these Silvia enthusiasts obtained around the same time. 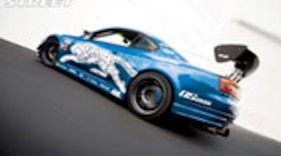 For Dominic Chen, racing is a passion that burns very bright, so it only seemed natural to pick a car to represent Endless' dedication to racing, a Nissan Silvia S15. - Super Street Magazine 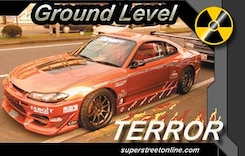 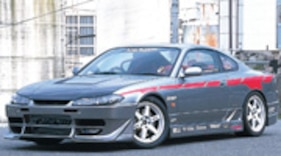