Leave it to Bisimoto to make a good thing even greater 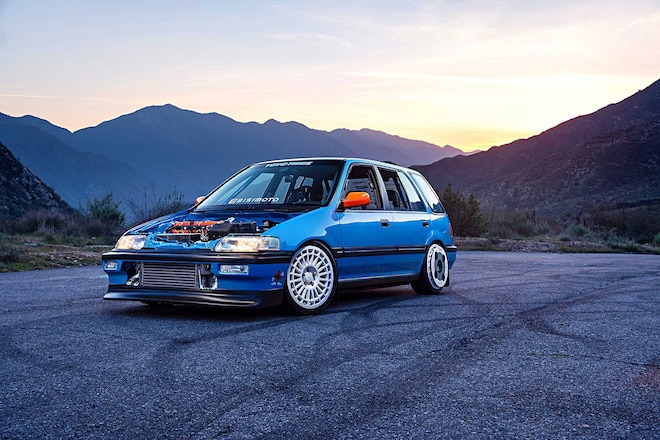 If memory serves me correctly (and I do apologize if it's a little hazy; it's been many, many years), Super Street has featured nearly every Honda built by the hands of Bisi Ezerioha. I distinctly remember the drag-prepped, all-motor CRX that initially put his name on the proverbial map, taking photos of it at a desolate industrial park somewhere in Southern California, and then interviewing him and learning about the genius behind the build process at a nearby diner. It was mind-blowing then (and still is to this very day) how he engineered it to go fast down the quarter-mile with a single cam D-series when others were doing it with twin cam setups. 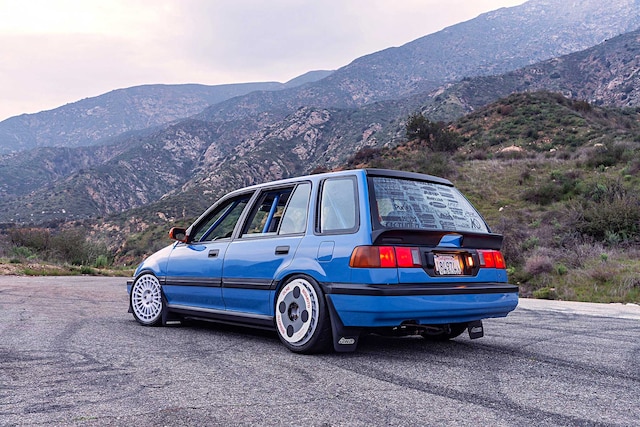 This know-how he carried over to his next drag project, a Honda Insight (sadly, the only car that wasn't featured); again, very fast (ran low 9's), and very meticulously designed and executed. Several years go by and we called on Bisi to participate in a unique build challenge: Recreate his D-series magic and drop it into a car we'd least likely expect. He chose an '88 Civic Wagon, and man, 724whp later, it worked like a damn charm. That car set the stage for his later endeavors that would catapult him to car builder superstardom, like the 1,029hp Odyssey that set the television world (including Top Gear) on fire.

As fate would have it, history found a way of repeating itself, albeit this time in a much more powerful way. This '91 Civic Wagon once again confirms Bisi's genius, not only in the literal scholarly sense, but also from a mechanical standpoint. Don't mistake this as the original Wagon; it's an entirely new build, remixed to go all-out with the eleventh letter of the alphabet (hint: K), and working with a totally different drivetrain, an AWD system from the CR-V. However, had it not been for that Odyssey, this Civic might not have come to fruition. "I missed the original wagon very much after parting it out," says Bisi. "Since I was at a huge disadvantage with the FWD Odyssey and too much power/torque, the concept of a revenge vehicle was born. I set out to build a bigger, better, faster, and more traction-friendly sleeper shuttle!" 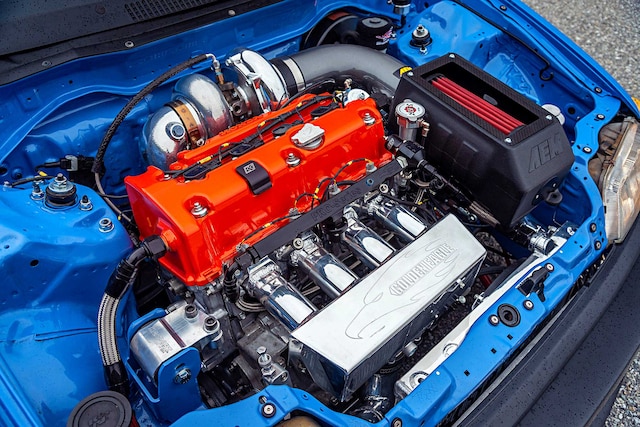 In typical Bisi fashion, he whipped up a powerful engine setup that's the combination of a built K24Z3 bottom end out of a later-model TSX, then stuffed with a billet Eagle crankshaft, Traum pistons and a Golden Eagle block sleeve. It's mated to a K24Z7 cylinder head from a '14 Civic, outfitted with Supertech valvetrain components and Bisimoto-spec cams. The cool thing about this build is that Bisi says anyone can recreate this motor (unlike the original D-series, which was built with primarily bespoke parts). He adds, "There has been an outcry [from the community] to use parts that are commercially available to allow for ease of replication by enthusiasts. We worked hard to use parts that anyone could get." So, if you want to rock 700+ horsepower like Bisi does in this car, well, now you can. When you compare the two engines, aside from the obvious difference in engine type, today's technology is far superior as it employs drive-by-wire, CAN bus communication, improved electronics, a lightweight twin-disc clutch assembly and turbo aerodynamics.

As you can guess, this build also comes with its own inherent set of headaches. In an engine bay this tight and the positioning of the K-series motor, making sure everything looks good and is fully functional was important to Bisi. "It was difficult to place the hot side of the turbo in an ideal location that would allow it to work efficiently. Our answer to this was a reverse Turbonetics turbo. Additionally, the alternator and cold side of the turbo posed other problems, as well as trying to fit all the larger components." After some trial and error, Bisi managed to find a way to get the turbo setup functioning correctly, which, along with the custom AEM intake configuration (feeding air to the cold side of the turbo), is his favorite part of the build. 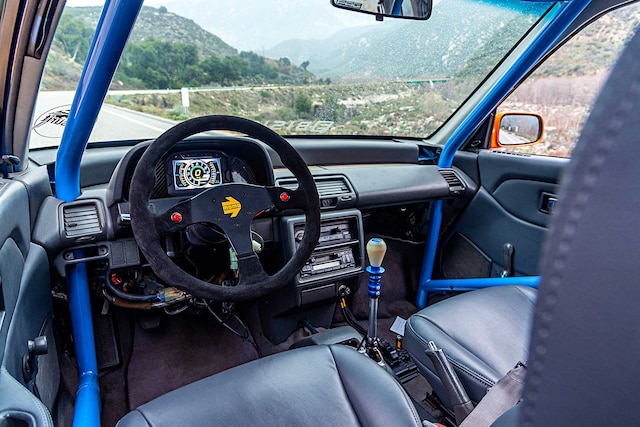 Power is transferred to all four wheels, which, of course, wasn't what this Civic came with. "Making the '04 CR-V system work with as many factory parts as possible and to work with a Quaife sequential transmission was a challenge," Bisi says. Quaife internals are used inside the bell housing of the CR-V. The CR-V differential is also used; however, it features an Automotive KND mechanical quick-spool setup that engages the rear-end when the front speed doesn't match the rear, meaning this AWD system isn't on all the time but only when needed. There's also a more robust driveshaft from DriveshaftPro, as well as '99 CRV rear trailing arms, which move the wheels about an inch further back for a longer wheelbase.

Before the car was set to make its debut at the 2018 SEMA Show, Bisi had to get it magazine quality presentable. In staying true to the spirit of the original, it was sprayed in a Glasurit Marina Blue coat (a bit of a deeper, more Smurf-like hue), lowered on V3 coilovers by KW, and fitted with 17-inch fifteen52 wheels (design pays homage to Lancia Delta Integrale), of which the rears had custom retro turbofan covers from D-Lng in Belgium outfitted. An ARCE six-point roll cage also adds much needed rigidity to the ninety's chassis, but what's even cooler are the bars down by doors are removable when Bisi isn't racing. 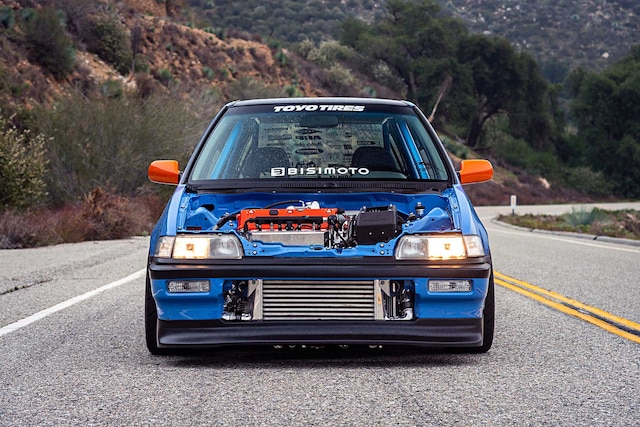 The new-school wagon is a perfect nod to Bisi's tuning history while showcasing how much more of an artisan he's become throughout the years. It's true that if something is good enough, you can leave it alone, but if you have the means to do it, you might as well go balls out anyway. 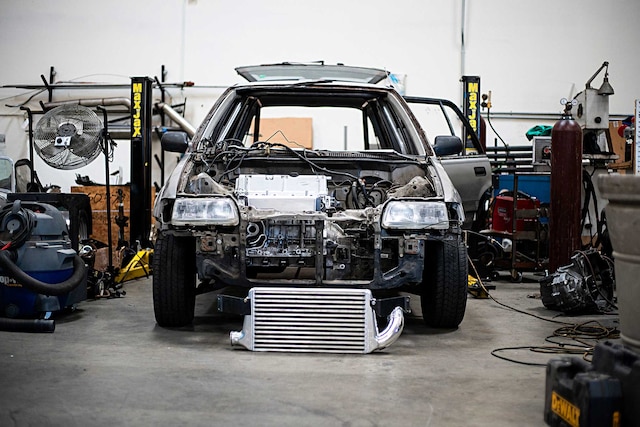 While many hardcore builds like Bisi's are outsourced when it comes to the tough stuff, he essentially builds his project cars from start to finish in-house. We checked up on him with about a month until last year's SEMA deadline to see all the action being done under their facility's roof, such as the engine assembly, turbo and intercooler fitment and other custom fabrication.

Originally featured in July of 2007, here's a look at what Bisi's first Civic wagon looked like. Under the hood was a fully-built D-Series engine with Portflow head, Golden Eagle-sleeved D16Z6 block, Turbonetics BTX6565 turbo, AEM electronics and Rywire Mil-spec harness. It made 724whp on 108-octane and water-meth, however was only front-wheel-drive, whereas this second iteration will have much more grip and function than ever before. 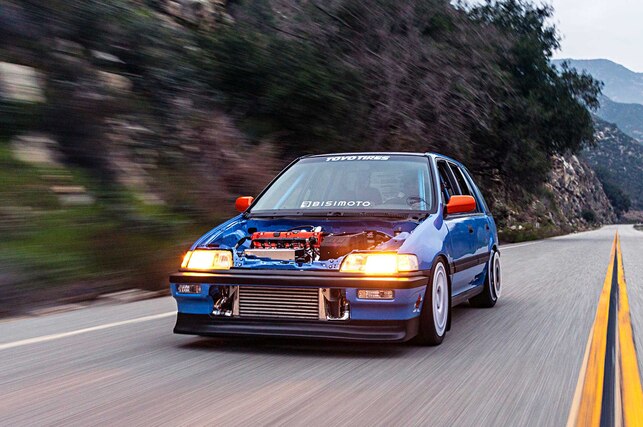 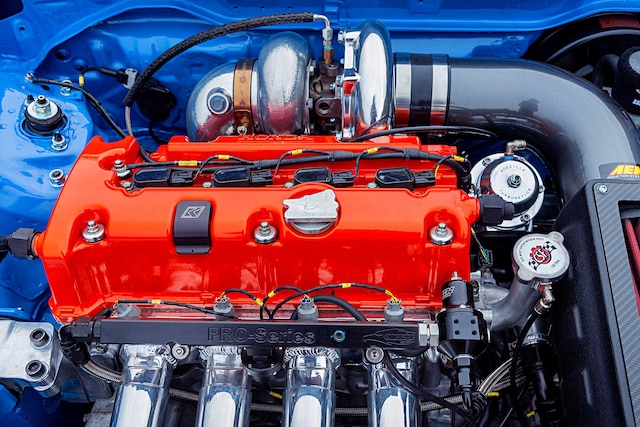