One of the raddest driving experiences of my life (and it wasn't even a car!) I'm terrified of motorcycles (fallen off twice) and I'm slightly afraid of ATVs (flipped one over and it nearly landed on my head). But ... I love going fast and pushing the limits of my driving skills; it just so happens I'm the most comfortable and feel the safest in a car. After 20 years of having a driver's license and more than 10 years of road testing so many amazing vehicles in my line of work, I've discovered a new form of happiness that equates to holding my first drift, winning my first race, and losing my virginity. I'm talking about UTVs, also known as side-by-sides. And, quite frankly, I haven't had this much fun in a long time! 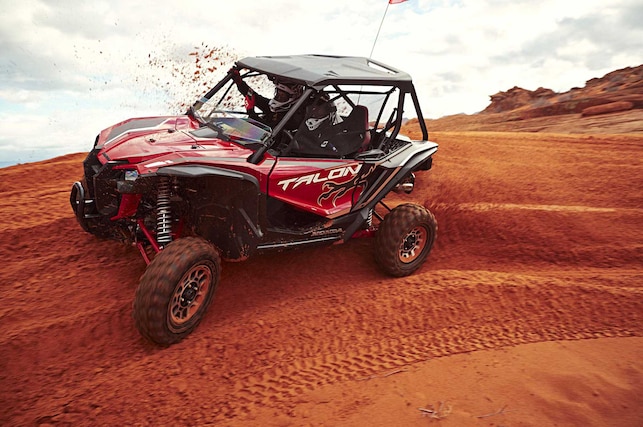 Let's circle back to the L.A. Auto Show last November ... I'm sitting in a press conference watching Honda representatives introduce the latest Passport SUV; however, showcased on a trailer in tow is Honda's new Talon side-by-side. Now, most journalists felt numb to the display and had no idea what to make of the small, four-wheel-drive all-terrain vehicle. They're typically critiquing minivans and looking up fuel economy ratings, whereas the world of dirt bikes, quads, and, of course, side-by-sides are as interesting to them as prime rib is to a vegetarian. But hold your horses... Thankfully, I'm not your average magazine editor. I'm a thrill seeker and a boundary pusher. I'm obsessed with cool projects and exciting experiences, which is why I cleverly planted a tiny seed with the folks at Honda, one simple little idea that I needed to test out the new Talon. Four months later, I found myself here in St. George, Utah, as possibly one of the first auto journalists given the rare opportunity to strap into Honda's latest off-road toy.

I've never traveled to St. George before, let alone heard of it. It's a small city in Utah, about a two-hour haul north of Las Vegas. Unless you're a guy or gal who spends a lot of time in the dirt, you're unlikely to know about it. The town sits on the northernmost part of the Mojave and is relatively close to Zion National Park. The locals refer to it as a recreation paradise, especially considering there are places like Sand Hollow State Park—1,322 acres of open desert, sandstone cliffs, rock-crawling hills, high-speed trails ... you name it. Anywhere you look, you can basically drive, and that's exactly what I was about to do in the new Talon. 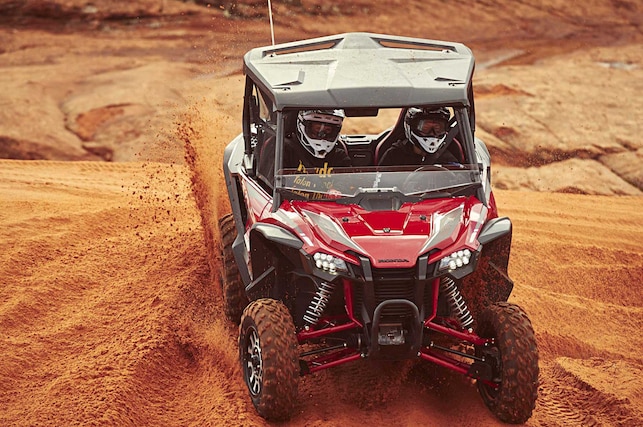 Unlike the Honda Motor Company that started more than 70 years ago in Japan and today sells 5 million cars each year, Honda Powersports is a widdle baby in comparison. The small division broke ground in 1998 with ATVs, expanding to street and off-road bikes, scooters, and eventually side-by-sides six years ago. Honda UTVs are manufactured in South Carolina, and the majority of their design takes place in either Ohio or California. The first and current line of Honda side-by-sides is multipurpose and utilitarian, meaning they're used for off-road transportation, towing, and hauling. Some models can even carry up to five people. As for the Talon, it's Honda's first side-by-side in the sport market, which, as you might guess, is solely engineered to tear shit up. ENGINE: The Talon comes in two models, 1000R and 1000X, and they're both powered by a 999cc inline twin engine. Doesn't sound like a lot of power compared to your Integra, but remember, the Talon only weighs about 1,500 pounds. It offers quick torque and incredible responsiveness in the low- and mid-rpm range. It's important to note that the cooling system and reliability is what you'd expect from a Honda. According to a rep, the Talon was tested up and down sand dunes in 110-degree temperatures repeatedly to ensure the engine wouldn't overheat. 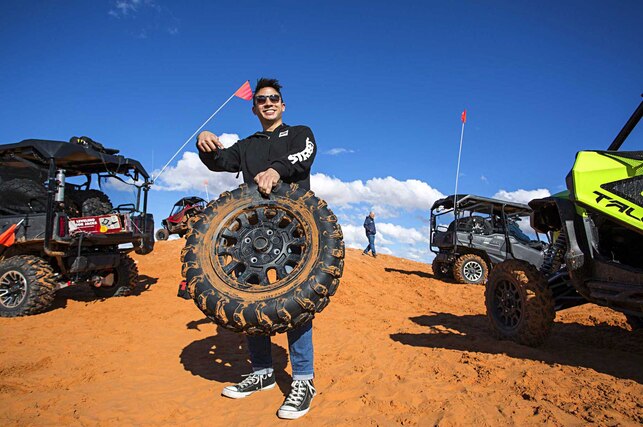 Photo 8/15   |   I nearly finished off the day unscathed... It was the final stretch and our group was playing around on a rocky hill where you could climb nearly 500 feet. I ended up slamming the passenger front tire straight into a hidden boulder at 40 mph. The sound from the impact would've made anyone cringe. Luckily, I was able to easily find a level surface, and our friends from Honda swapped in a spare tire in less than five minutes. Phew!

DRIVETRAIN: One of the biggest selling points of the Talon is the dual-clutch transmission (DCT). Similar to the technology you'd find in sports cars, the Talon does away with a standard gearbox in favor of a faster-shifting six-speed DCT with a Sport mode and paddle shifters. Other side-by-sides on the market come with a CVT tranny, which, in comparison, doesn't quite have the same precision and swift gear changes. I felt at home in Sport mode (similar to Honda car's Sport and Sport+ modes). This setting holds onto the rpm longer to maximize top-end power. There's also a pressure sensor, which downshifts more aggressively when slamming on the brakes.

I-4WD: As expected of any proficient off-road vehicle, the Talon has an all-wheel drive that'll get you out of any sticky situation. I experienced this firsthand, as it maintains front-wheel traction even if one side is slipping in the sand or in a hole. This performed well during sketchy rock climbing. 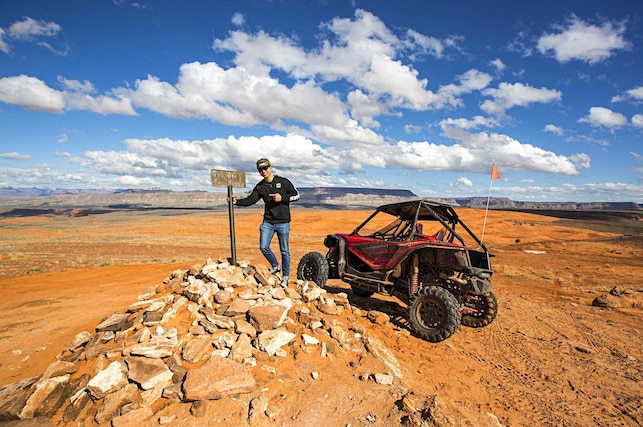 CHASSIS & HANDLING: To my surprise, the chassis isn't just a byproduct of the Powersports team but a collaboration with Honda's automotive engineers. The Talon handles like a little rally car, giving you instant feedback and functions much like what you'd expect from a high-performance car. The 1000X and 1000R differ in features like shocks, suspension travel, track width, and wheelbase. The 1000X is tailored toward maneuverability, offers precise steering, and is intended for tight trails and lots of back and forth transitions. The 1000R, on the other hand, prioritizes tracking and stability. It can absorb the big bumps, has 5 inches more travel in the rear, and is more comfortable at high speeds.

HOW DOES THE TALON RANK?

I've toyed with BMW M3s and Porsche 911s in the canyons and the latest GT-R and NSX on the track, but I can honestly say that being at the helm of the Honda Talon is one of the top 10 driving experiences of my career. On the fun meter, it's off the charts, and it's crazy to think that I'm not even getting the speedometer past 60 mph. It's the pure adrenaline of powersliding through the sand, jumping over unlikely obstacles without losing control, and being engulfed amongst the beautiful surroundings of St. George that made it truly special. There are no boundaries and you don't have to be perfect. You can get airborne, sideways, make mistakes, and still have the time of your life. 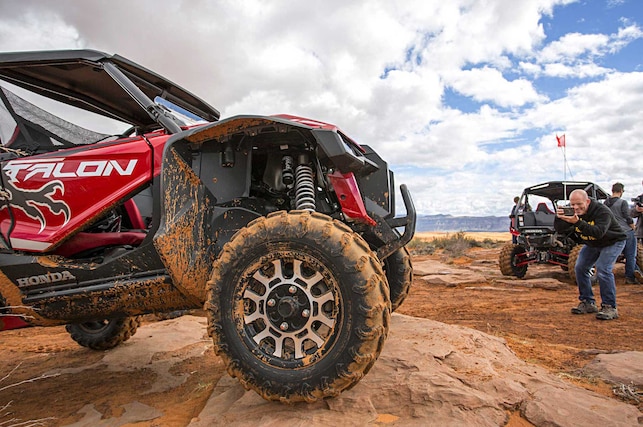 What's most impressive to me about the Talon is its ease of use. I've been a car guy my entire life, but when I hopped into the Talon for the first time, after 30 seconds I was going flat-out on a dirt road course like I was Sebastien Loeb. Of course, I made plenty of errors, but I quickly learned from them and continued to understand the Talon's vehicle dynamics as the day progressed.

There are two bucket seats, harnesses, a steering wheel, gas and brake pedals, and a shifter. It honestly feels like you've hopped in a car, except you're in a purpose-built machine that can plow through dunes at 50 mph but can also conquer unspeakable rock formations that some off-road trucks and SUVs would struggle to climb. Call me crazy, but I really feel side-by-sides could be the new gateway for many car enthusiasts into the off-road and powersports world. It's something you could enjoy with the whole family and haul behind that 4Runner or Tacoma of yours. And now, with the new Talon, it's something that wears an emblem you've grown up with and trusted your entire life. 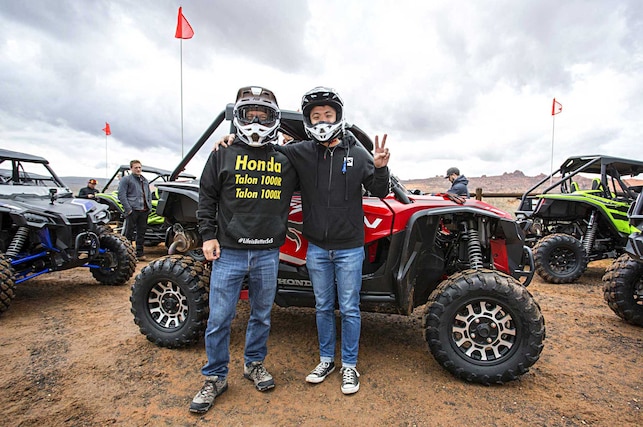 Photo 14/15   |   If you're a Honda fan and have been on this thing called YouTube, then there's no doubt you've watched a video produced by HondaPro Jason. He was my co-driver for our Talon adventure, and he shared an experience as gratifying as mine: "I've driven many cars on paved tracks, including the NSX, but this Honda Talon was more exciting and more fun. My cheeks still hurt from laughing and smiling!" 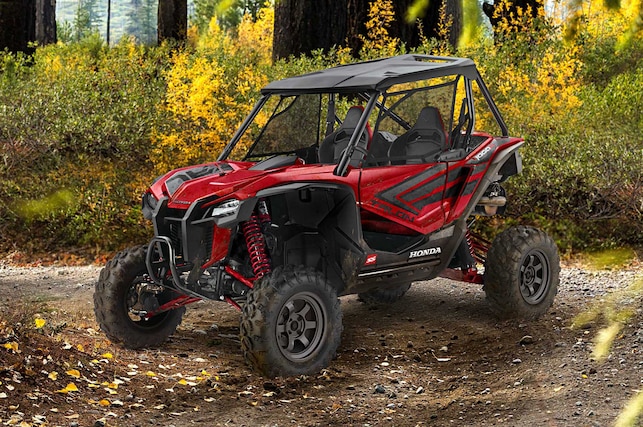 Have I taken this too far? I had such a blast in the new Talon, I started daydreaming about what I'd do if I personally owned one. Couldn't leave it stock, of course, so I had artist Jon Sibal work his magic to see what a set of Volk Racing TE37V wheels would look like on it. RAYS doesn't actually make a wheel that would bolt up to a side-by-side, but you never know. There was a time when it didn't make six-lug and Kei car fitments, either!