You've never seen a 1st gen. Civic like this turbocharged and widebody version 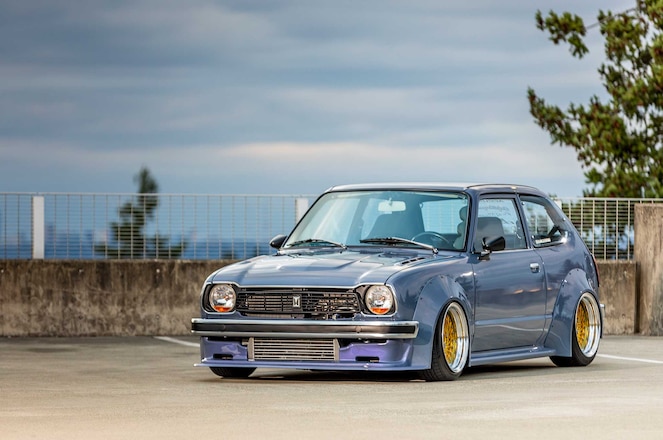 It's been a few years since I first laid eyes on Victor Ho's '78 Civic. I remember the hatchback vividly after attending the first-ever Wekfest Seattle show. While rolling in Super Street's very own Ratchet Bunny project car into the CenturyLink Event Center, Victor's first-gen Civic stood out like a sore thumb, but in a good way. It's not every day you see one of these OG Civics, let alone one that's been widebody'd, lowered on air and turbocharged. And for that generation/chassis of Honda, it wasn't anything that I would've expected. 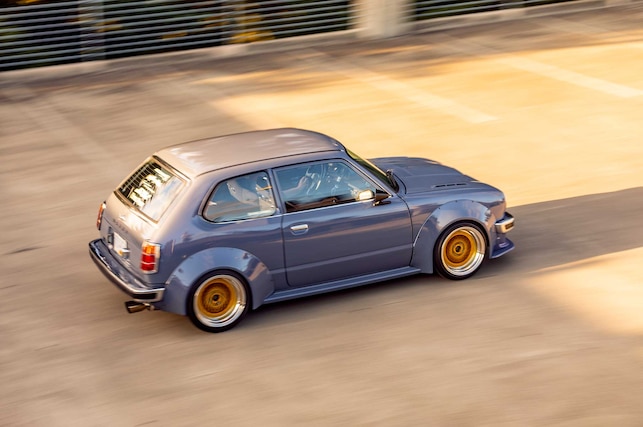 At a Wekfest show, we're prone to seeing well-executed JDM and OEM+ style builds; Victor went a completely different route with his SB1. The widebody he designed and fabricated himself is pretty damn wild. While it can be offensive to some, the fenders give it quite the unique character and "keeps up with the times," considering the popularity of riveted over-fender kits over the last decade. It's also refreshing to learn that Victor isn't a pansy when it comes to driving his project car as he made the three-hour trek from Canada for Wekfest. Even though it's taken a few years to get it shot, it's with great pleasure to finally showcase Victor's Civic. It still looks just as cool as it did when I first I saw it, and we hope you dig it too!

So how does one end up with a 1st-gen Civic, then go to great lengths to modify it?

This present 1st-gen Civic would actually be the fourth one I have owned. I got my first Civic back in 1998 because my brother and my buddy Justin March were modifying these cars. They were cheap to own but horrible for rust. I learned how to become a decent backyard mechanic from tearing apart these cars with no fear. Doing headgaskets, piston rings, tranny/clutch work, suspension, brakes, etc. Even did bodywork, cutting out and repairing rust and welding sheet metal. 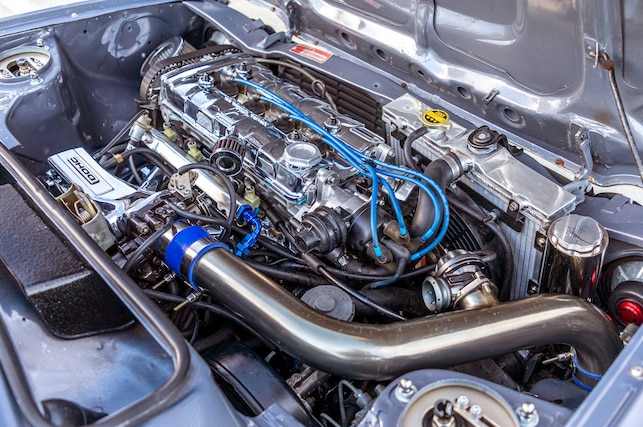 What is something about your 1st-gen that most people don't know?

A lot of people confuse my 1st-gen Civic as a CVCC, which stood for Compound Vortex Controlled Combustion. But in fact, I have the sibling, non-CVCC, which has a 55mm shorter hood and front fenders.

Both questions get the same answer... What I didn't like was not being able to simply purchase aftermarket parts off the shelf. Almost everything had to be custom made. But on the flip side, with this problem I was able to enjoy the learning process, becoming the mad scientist to build a Frankenstein. Heading out to the local auto wrecker/recycler with friends, taking parts off other cars and making them fit the Civic. 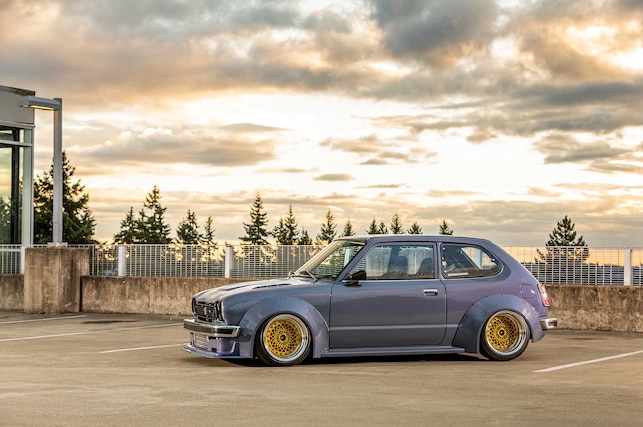 Can you tell us a little bit more about the engine setup?

I inherited this motor from a friend who was doing his own engine swap. Since it cost me nothing, I proceeded to teach myself how to rebuild it. New valves, valve seals, piston rings, polished and port matched intake/exhaust and swapped out the cams to a little more aggressive pair. With the car only weighing in at 1500 lbs, it was already a lot quicker. The turbo was added a year later to satisfy the thirst for more power. Out with the boys at our monthly local auto wrecker trip, I found a TD-05 out of a Volvo (can't remember the year). Changed the exhaust manifold, built my own piping, adjusted the internal wastegate to 10psi, added the intercooler and GReddy blow-off valve for the beautiful sound. Now the issue was wheel spinning through first, second and into third gear, but is this really a problem? Haha!

Your widebody is quite unique. What's the inspiration and story behind it?

This eight-piece widebody kit was designed and built by me. I first learned how to work with fiberglass building sub enclosures. My brother and I competed in IASCA (International Auto Sound Challenge Association) back in the early nineties and got to the world finals. With awesome kits put out by RWB, Liberty Walk and Rocket Bunny, and nothing for my 1st-gen Civic, I decided to design my own. With my limited knowhow, I was able to make molds of my present kit. I'm still missing two more pieces—a spoiler and rear diffuser. I'm also in the process of making a version two for 2020. 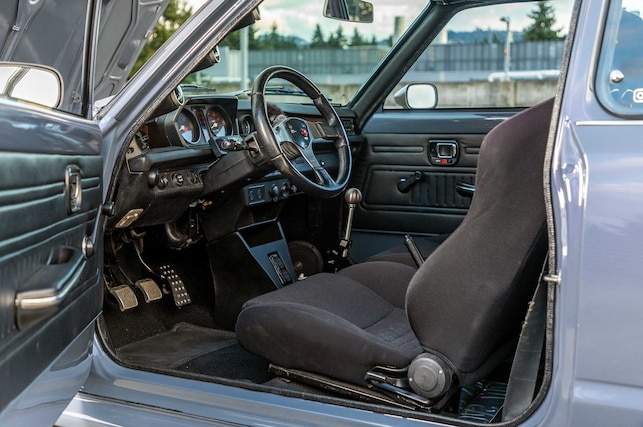 Impressive! Any other very custom or one-off parts?

Aftermarket support for these 1st-gen Civics are limited to nonexistent. Most parts had to be sourced from other generations of Honda or custom made—engine mounts, shorter driveshafts, turbo, downpipe and intake pipe to name a few. Even my gauge pillar pod came from a Volvo V70R, modified to fit the Civic.

How long did it take you to finish the build?

I have had this Civic for about 15 years. It has gone through three transformations and two different engines. During these 15 years, both my kids were born, and my parents passed. There was a lot of time where the car just sat in storage. 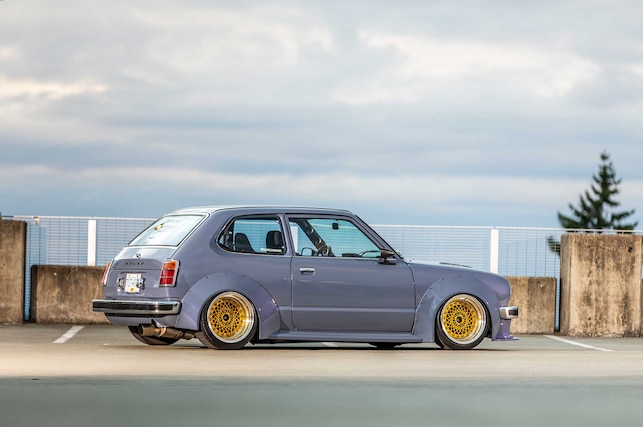 What's been your greatest accomplishment with this project thus far?

Learning lots. Knowing a backyard mechanic can do a lot with the right tools in your home garage with the help of the internet and good friends. I have been asked numerous times if I would consider selling the Honda and what I would price it at. I'm not able to put a price tag on it. The memories, time and effort put into this car is worth more to me than anyone is willing to pay.

Have a favorite part of the build?

I'm not able to pick one part of this build. I believe that all my modifications complement each other. Wider wheels need the flares to look good, but with the air suspension, it allows the wheels to tuck into the flares for the nice stance. 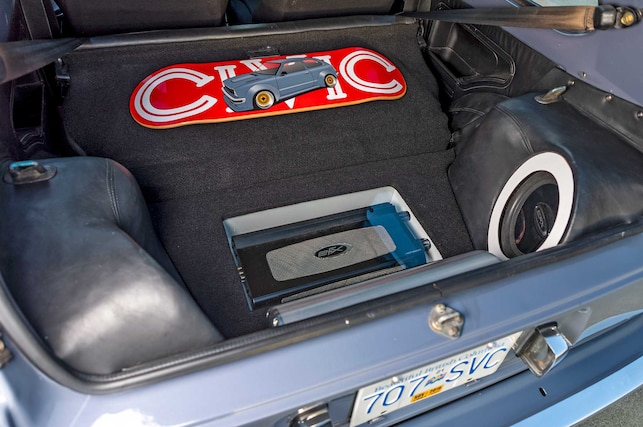 Once I finally decide that I'm done modifying the Civic, I have a 1981 TE72 wagon with a big port 4A-GE waiting for me to start.

Can't wait to see how that turns out! 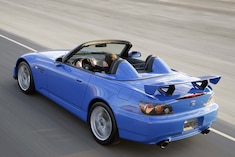 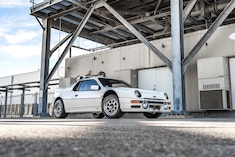