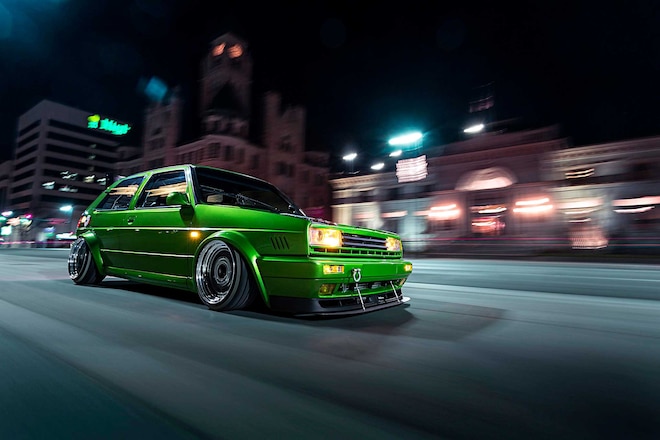 This sexy slab of green Volkswagen nostalgia began its transformation when it was little more than a rusty blank slate. It was the perfect platform for a high school student with grand plans. When Ben Hobson bought this VW GTI in 1998—more than 20 years ago, with a little more than a fistful of dollars and zero clue as to how things would evolve—it was dented to hell, devoid of bumpers, and missing headlamps. 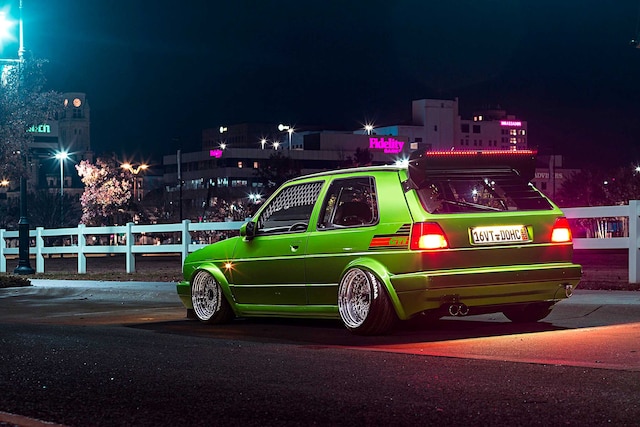 Building a German car during the Internet's infancy and in the middle of Kansas proved tough. Ben became a hoarder, collecting Mk2 GTI parts (many of which were obscure and discontinued) for four years. Meanwhile, the Fast & Furious franchise had taken the world by storm, and with it came all manner of aftermarket insanity, causing Ben to fall hopelessly in love with the scene. But since there weren't a lot of proven mods for his particular 1.8L Volkswagen, creativity took over.

The car was painted a shade of '73 Porsche 911 Chartreuse green first, but less than a year after the paintjob, nefarious thieves swiped precious items and damaged the factory doors. Not wanting to ditch the classic hatch, Ben utilized his insurance claim to kick-off a full-blown rebuild. Brad Umscheid from Paints Unlimited was brought in to tear the car down to its shell, rework the body, remove any rust, and mold and shave everything, including the engine bay. Afterward, a coat of custom Sikkens paint was sprayed, which remains in flawless condition 15 years later. 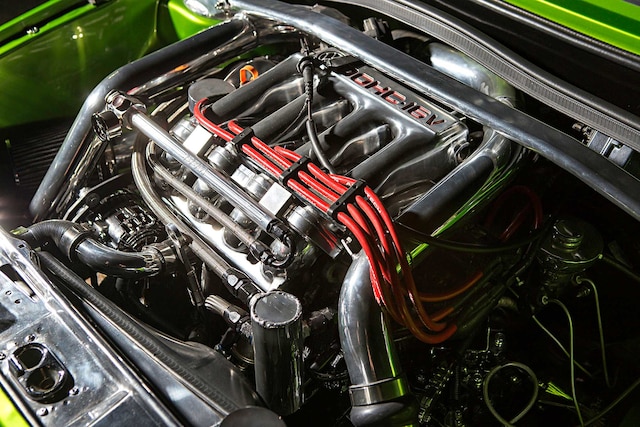 With the GTI painted, it was then put in storage where it sat for 10 years. Yes, 10 years! It wasn't until 2013 that a guy by the name of Kevin Antaki contacted Ben, rekindling his interest in the vehicle. Ben was working in Canada at the time, so the car was shipped to California, where Kevin addressed the Golf's power upgrades, a decision that proved quite wise. Swapping in a turbocharged 2.0L 16v engine running on modern OBD2 engine management turned the 129-crank-horsepower underachiever into a 318-whp hellion—impressive numbers for something so small. 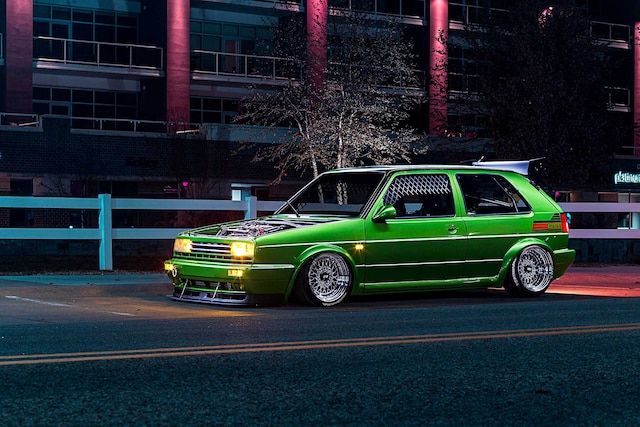 As Kevin buttoned up drivetrain upgrades during the summer of 2014, Ben prepped for his trip out to California. He turned around and drove the car back to Kansas, a 26-hour engine break-in period that yielded zero issues. With his baby back, Ben then proceeded to tear into his stockpile of parts, opening up the time capsule from 15 years prior. This explains why everything from Ben's audio and electronics to the old-school turbo motor is era-appropriate and about as clean as it gets.

Fans of the Mk2 chassis will likely appreciate the nose and headlight setup, which features a front-end conversion from the highly coveted European Rallye Golf. Rectangular projector lights and unique grille noted, we move to the Wiechers rollcage and Happich pop-out glass inside. While the rarity of this 'cage is indisputable (Ben only knows of two others in existence), it is the pop-out rear windows that earn the most double takes. Available for only a short time during the '80s, these transparent pieces of awesomeness offer additional depth to the lines of the car, while providing additional airflow during summer months. 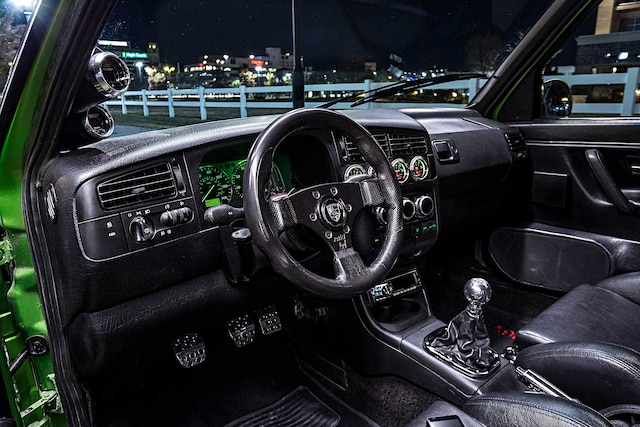 Ben's infatuation with all things retro also led to the discovery of those remarkably rare aluminum rear window louvres, which add an aggressive slope to the rear hatch. Originally made by Astra-Hammond in finite numbers, the louvres merely required some custom brackets and powdercoating prior to install.

As for the one-off wing hanging over the rear sunshade, Ben says his love for DTM touring cars spawned that creation. In his eyes, no company made a rear wing for the Golf that was bold enough, so he took matters into his own hands, turning toward sheetmetal and a template. With an outline created, a structure was then waterjetted and bent to order, while a donor wing was sourced for its aerofoil cross section. In true DTM fashion, this wing remains fully functional, complete with a trio of adjustable mounting points for obtaining varying amounts of downforce. Dusting everything off are strips of integrated LED nodes that double as running lights, brake lights, scrolling turn signals, and clear reverse lamps. 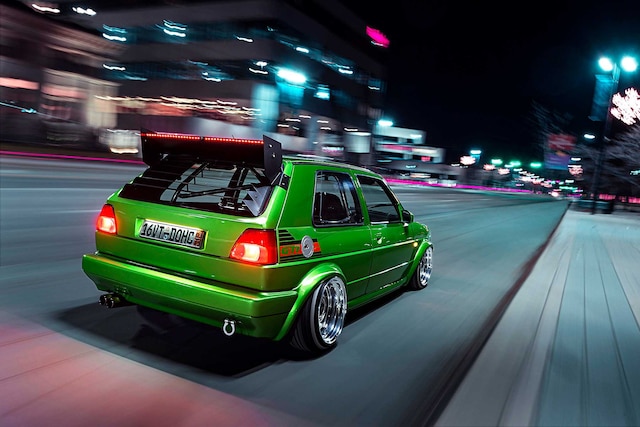 Ben let his "Green Bean" grow organically from the ground up and, after 21 years of ownership, he's pretty much done. Hell, we would be, too. It's time to just drive it and enjoy it—what Volkswagen intended when it designed the GTI in the first place, and what Ben does every weekend.