Danny Aguirre shows us the right way to build the ultimate Toyota Supra from the ground up. 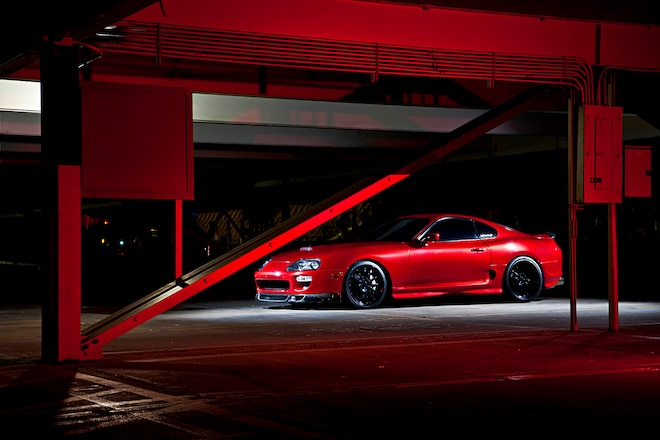 What do you do when you've already got a show-winning MKIV Supra? You rip it down to the ground and redo it even better than before, of course. On second thought, you wake up and realize that you don't do any of those things because you don't own Toyota's iconic twin-turbo coupe and you're nowhere near as neurotic as Danny Aguirre. But don't mistake that for a bad thing. Not exhibiting symptoms of just a wee bit of neurosis won't get you anything as painstakingly thorough as what Aguirre's put together over the span of three years. 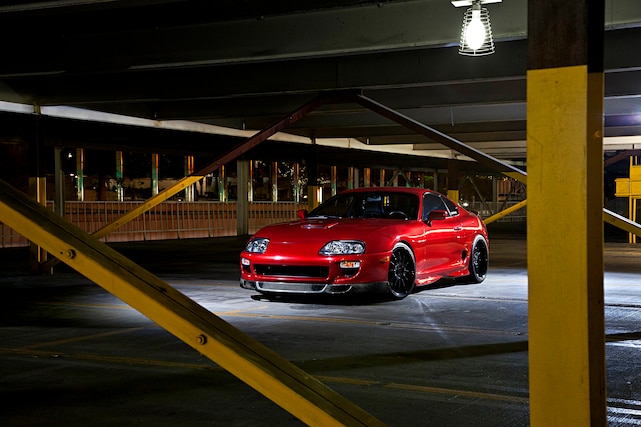 You think the car's previous shade of Anthracite Titanium Gray was good enough, but what you didn't know about was the two different shades of red paint Aguirre subjected himself to every time he'd pop the trunk or peer into the depths of his engine bay. You also think the 850 whp that its 2JZ-GTE made was plenty, but what you didn't know was that Aguirre had his sights set on a whole lot more power than that. To just about everybody, especially Aguirre's wife, a ground-up rebuild was a hard sell for a car that was already fast and near immaculate; however, there was no other option for Aguirre. It had to be perfect. 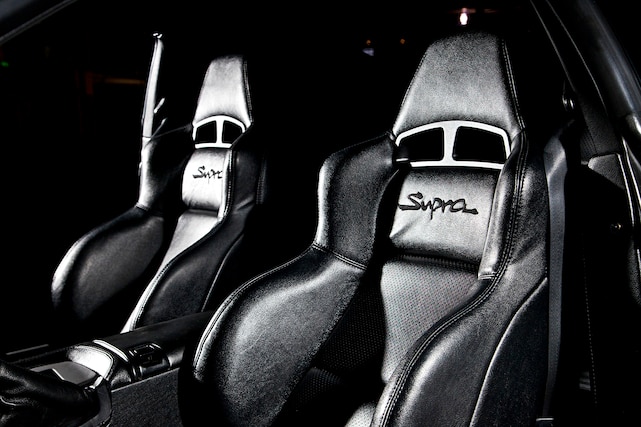 The whole thing was an undertaking nearly 25 years in the making now, dating back to the first time Aguirre laid eyes on the MKIV. He was only 18 though, and Toyota's factory-tamed race car was out of reach, which led him to a series of supercharged Mustangs, an Accord, and a del Sol with a twin-cam Integra swap. "I was a pro-domestic guy in the beginning," he says about the Fox bodies, the Cobra, and the Saleen S351 that fortuitously led to a string of cars with engines less than half the size and with drivetrains at the other end. "I [moved on to] Hondas because they're cost-effective, a fun platform to modify, and easy to work on." 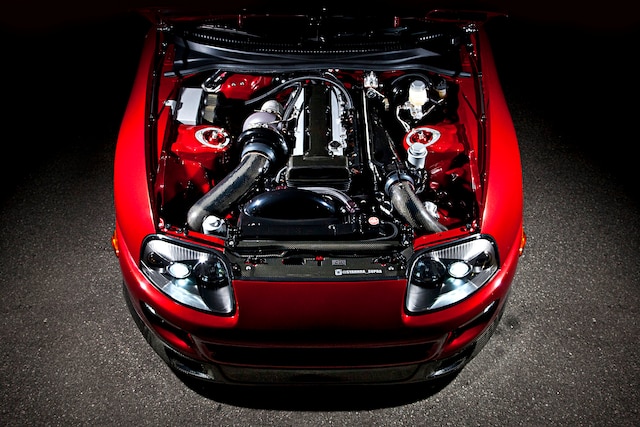 By most accounts, this Supra buildup was done. And then '11 happened, which is when Aguirre decided to, as he puts it, "right the car's wrongs," tone down its aesthetics, and go looking for more power. The goal, he says, was simple: "Make the car the way I thought the factory should've offered it, accent its lines, and make it one of the cleanest and hottest street-driven Supras around."

For that he turned to the sort of things he'd need to draw about 1,000 whp from the six-cylinder, like a Bullseye Power S347R turbo—a single one this time around—forged internals by way of Wiseco, GRP, and Titan Motorsports, and ProEFI's stand-alone computer. The plan netted Aguirre 970 whp, which he apologetically points out is 30 whp shy of his goal but which he'd do well to remember is still a good 825 whp more than that del Sol's B18C.

While the engine was being assembled, paint was being applied. Here, no cavity or crevice was spared. Righting this Supra's wrongs would mean Aguirre'd never find himself slid underneath the dashboard staring at some presumably exiled color. It'd also mean that aftermarket exterior treatments would be few, like the Seibon carbon spoiler up front and Uchida spoiler in the rear that complement the updated '97-'98-spec headlights and taillights as well as Japanese-grade side skirts and rear spats. It's subtle, few road-worthy cars can beat it, and it's exactly what he wanted. 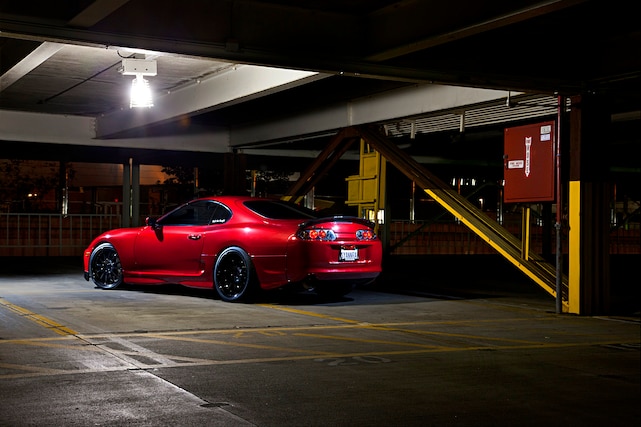 "I've always had love for Toyotas," Aguirre says, reminiscing about the '71 Celica of his father's that he remembers as a child. It's a sentiment he's since handed down to his own son, who toiled alongside Aguirre for the three years it'd take to redo the Supra and later found himself a part of the same club, only him behind the wheel of an earlier MKIII. 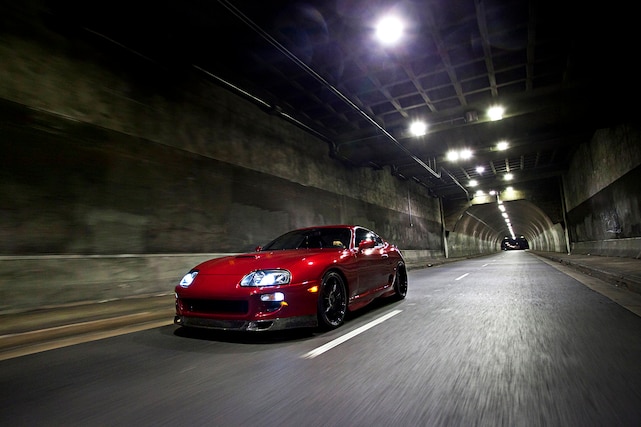 Aguirre's intentions when first taking ownership, he says, was to leave the car alone. "The HKS kit put me well ahead of the game and was a big [reason] why I bought the car," he says, "but, like anything, you [later] find things that aren't up to par." But one man's version of par isn't necessarily everybody else's. "To rip it to the ground and start all over, the biggest challenge, initially, was getting my wife on board," he says. "She thought I was crazy—a mentality shared by many of my buddies." Buddies of which now, after seeing the results, just might be questioning their own mental veracity. 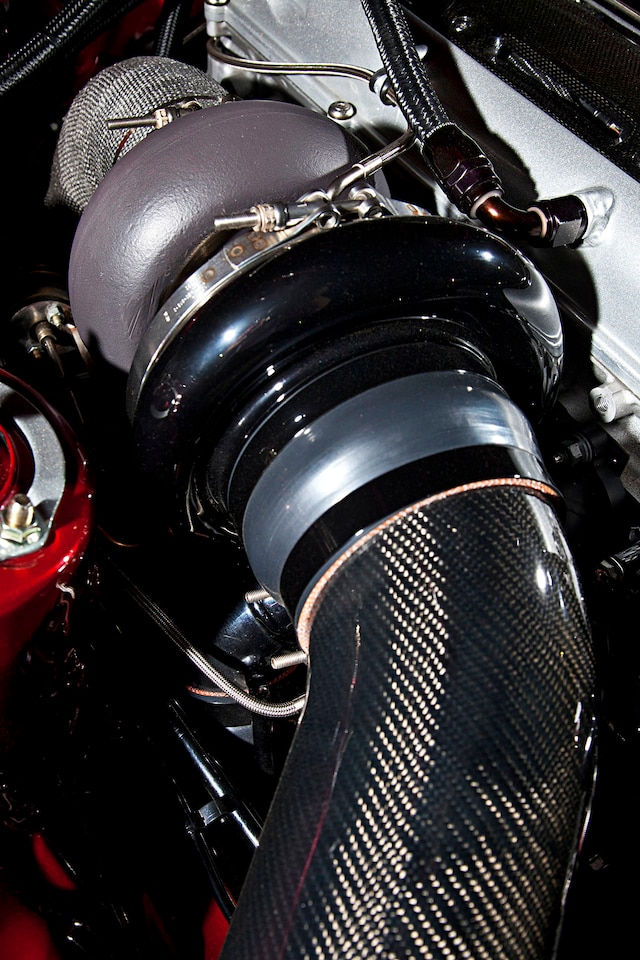