Patience, perseverance, and a touch of obsessive compulsiveness culminate in an ageless EJ8 Civic coupe

If you're getting the feel that this 1996 Honda Civic EX is somewhat familiar to you, you're not alone. That is, if you're a regular Super Street visitor and caught the story on the owner's other project, a 2000 GS-R sedan. Beyond the similarity of a pair of white Hondas atop choice white wheels, the minute details and careful execution really tie the two cars together. Admittedly a serial builder that takes ample time to stalk his prey before making his move, owner Todd Grant has essentially built this coupe twice - once as a "piece here, piece there" affair, and a second time in an effort to apply the things he'd learned over the years to perfect it.

Read through his Integra build story and you realize that much of that sedan predicated on circumstance, while this EJ coupe, though intended to serve strictly as a daily driver while Todd chipped away at a '94 Civic hatchback, transitioned into another project on his to-do list. Between the three cars (four, if you count the original GS-R sedan donor vehicle), this Civic was the unsung hero, serving as a reliable daily for years and racking up over 220,000 miles on the clock. Of course, having multiple projects in the works means even the everyday transportation had to get at least a little love. "I believe the first purchase outside of the required height adjustment via coil-overs and stereo upgrades, was the 1996-spec 4x114.3 ITR suspension conversion with wheels," Todd recalls.

After finding some hidden rust in the hatchback, it was pushed aside for the time being and the coupe became part of the whirlwind of searching, purchasing and installing parts that swept through Todd's garage regularly. The search for an EM1 dash was fruitful, as was the hunt for additional accents like the Canadian SiR bits. Mix the new, much darker dash with bright red Recaro SRD seats and a cry for help level of cleanliness and this coupe's cabin is the epitome of the OEM+ mentality. 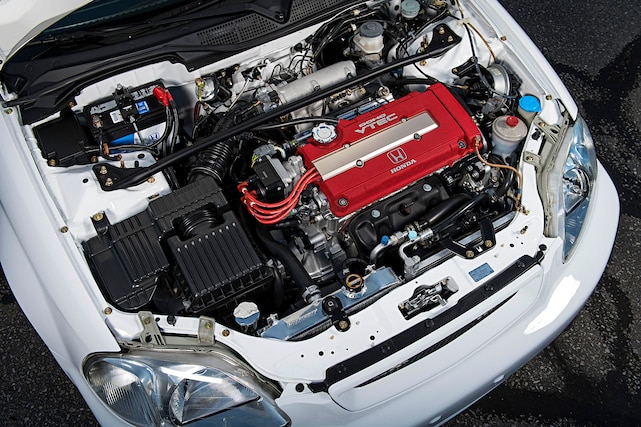 It's not going to break the sound barrier but for Todd's purposes, the classic B16A swap is more than enough to keep him entertained. Other than the shiny aluminum radiator and low-profile valvecover fasteners, the engine bay looks like a Honda sales brochure. All OEM brackets and hardware were replaced or refurbished and only the trained eye would spot the ITR heatshield that hides a '98-spec header and, if you've been around for a while, you might recognize the Skunk2 intake manifold. Before the brand began applying their logo in a raised, rectangular style on newer units, it looked just like a factory ITR unit. Beneath the surface you'll find a set of B16B CTR cams and inside the factory airbox is a high-flow air filter.

Think of the interior and engine bay as the Civic Type R coupe that should have been produced in the late '90s. A long list of audio upgrades are all but non-existent in most other feature cars that come through our doors but in Todd's case, it's absolutely required - his DB8 story will back that claim up.

Patience is a major part of this and any of Todd's other builds. Take for instance, the OEM optional front and rear bumper lips intended for the '99 to '00 model. Tough to source, they finally danced across his screen after a few years of digging around. When he finally got them, he dressed them up with a "colormatch in a can" since budget constraints wouldn't allow any outsourcing. The dollars saved allowed him to grab a set of Gab Sports wheels (later used on the Integra in his other feature) and for the most part, the EX was a wrap.

A little while after completing his Integra sedan restomods, Todd felt the coupe needed the same sort of attention, so in the garage it went and everything was removed in preparation for a deep dive into the restoration realm. He adds, "I began the grueling and expensive task of tracking down all new Honda nuts, bolts, brackets, clips, seals, etc. I painted the engine bay myself, tore apart the engine, cleaning up every inch, painting some parts." In addition, while he had everything out, it was the perfect opportunity to clean up some of the wiring he'd done in spurts during the car's first life. Adjustable beam Valeo headlights, EK9 column light, stereo and alarm, and everything else wiring-related was redone, including revamping his required audio set up. 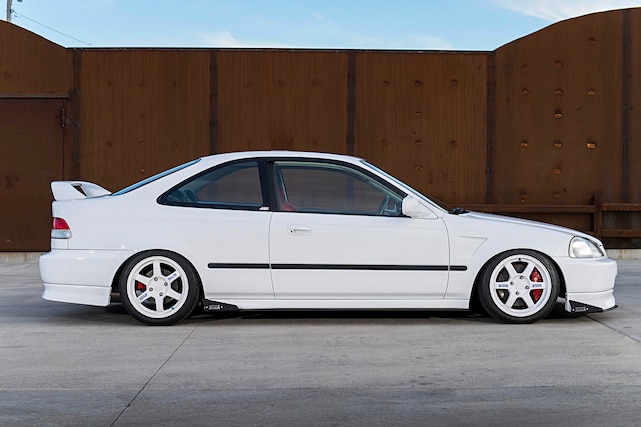 Under the wheel wells, what you can't see are the hours put into pulling suspension components, coating them and the wells in durable implement paint before adding new bushings and ball joints. What you can see are 16x8-inch TE37 and DC5 ITR Brembo calipers. The white-on-white combo is as clean as it gets, and the dark grey interior with bright red Recaros makes for great contrast.

When it came time to paint his Integra, Todd took the task on himself, splitting time between his home garage and a rented paint booth. This time around, a friend offered to take care of the respray and the only labor Todd had to contribute was disassembly duties. Subtle J's Racing fenders grant some extra breathing room for the front wheel and tire package and just like his GS-R build, a Top1 front splitter and side diffusers are bolted in place. 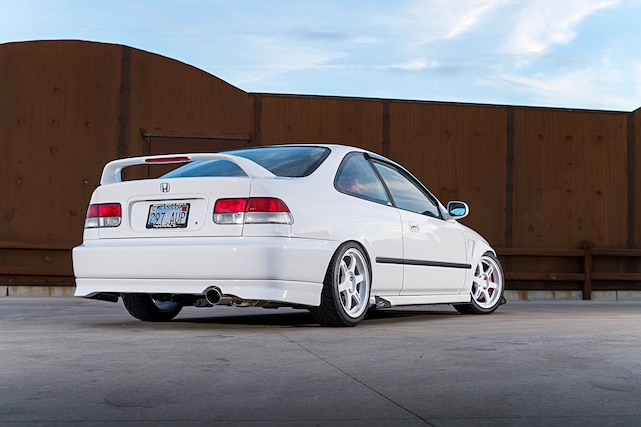 Todd Grant's GS-R Integra and Civic EX are part of a unique group of builders that have quietly been chipping away at long-term builds that often fly under the radar. They don't boast tire-smoking dyno numbers, excessive camber, huge rear wings or other overtly in-your-face upgrades but instead, focus on painstaking details that most would never catch. The OEM+ style isn't anything new, but it's certainly taking on a new respect in the Honda world.