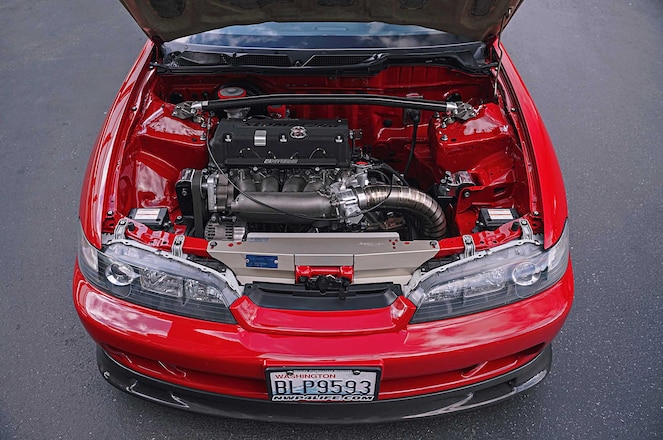 It's time to move on. Time to grow up and take on those adult responsibilities, which if we're being honest aren't in any way fun, and probably the cause of your parents often looking angry for no apparent reason. Truth be told, a large chunk of our community pulls up to the metaphorical crossroads at one point or another and a major decision has to be made. On the one end, the passion to pick up a new project car or continue chipping away at an existing one can mean late night wrenching stints with your friends and plenty of good times. And then there's the other end that'll quickly bring you down to earth when you realize how much you're spending and just how much of that you'll never get back. In short, adulting is largely based on the dollars and cents that a seasoned financial analyst will tell you should go somewhere—almost anywhere—other than a car. 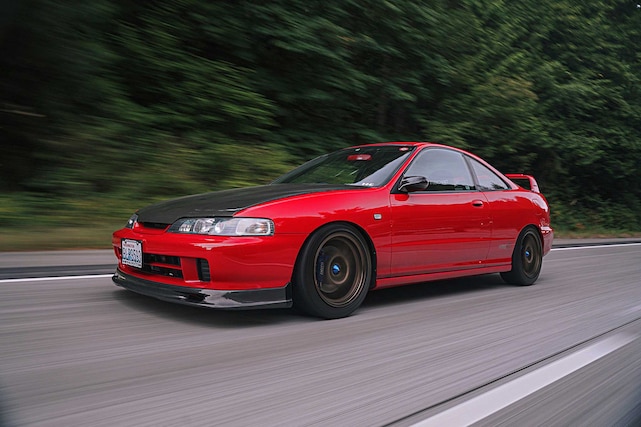 In the case of Omal Efrem, owner of this bright red 1996 Honda Integra Type R, his decision to leave the garage life behind in order to focus on transitioning into complete independence was quickly thwarted by a heavy dose of reality. Having spent the better part of four years behind the wheel of a GS-R swapped Civic EH3 Si, he was ready to try his hand at a K-swap. With his friend Thomas lending a trusty hand, an engine was sourced and things were about to get underway. That is, until some previously unnoticed frame damage was revealed. Omal was ready to move on and sell the project car that he mentions had helped foster not only his love of modifying cars, but also served as a hands-on education of sorts.

"My goal at the time of parting out the car was to move into a place of my own, but it was soon after that I realized I was an idiot and knew nothing about how things worked when it came to acquiring a house at such a young age," Omal explains. The young part of the equation is important in that it lends itself to forgiving mistakes and offers plenty of "do-overs," not to mention more than enough time to put off mortgages and dad hats for a few years. The flash of reality had Omal contemplating another shot at building a Civic after assessing all he learned over that four-year period of good ol' fashioned trial and error, and eventually the search was on.

In the midst of all of this, Omal's friend BJ had picked up a 1996-spec Type R spotted on Craigslist. BJ tore it down for a complete color change from its original Championship White to Milano Red. With every inch of the car covered in the classic, deep color-code, it was reassembled with a slew of Mugen goods and turned out incredibly well. After a year and a half, however, BJ decided to let go of the DC2. As you might expect, he was inundated with lowball offers and resorted to parting the car out in order to recoup some of his invested dollars. Having always dreamed of building a Type R and without any good leads on a solid Civic chassis, Omal saw the naked chassis as a way of fulfilling two goals: ITR ownership and completing the K-swap that had never transpired.

"I came up with a vision of how I'd always wanted the car to look and perform - from the moment I acquired the car it was a non-stop grind for about a year and a half to turn my vision to fruition." With the help of his friend Thomas, the pair gave the DC2 a whole new look, built around the stellar paint job. Mugen's gen. 1 wing is perched atop the deck of the rear and the only other actual body mods are the Spoon Sports carbon fiber hood, front lip, and mirrors - leaving the rest of the Milano-covered body to boast Honda's sporty, 1990s-era factory lines. 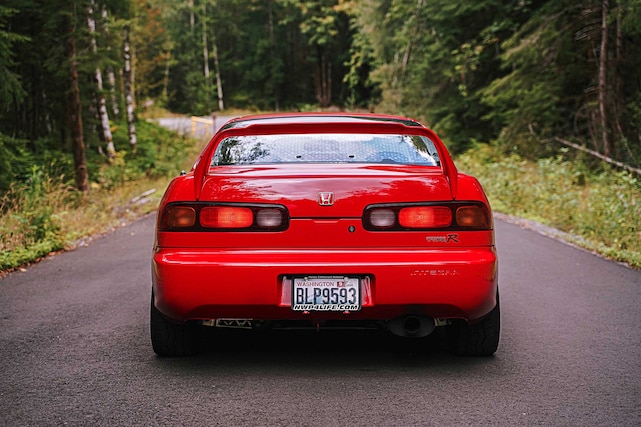 The original 4-lug wheel pattern was ditched in favor of Honda's updated 5-lug from a later model Type R, and rather than the typical 16x7-in. MF10 specs, Omal's bronze Mugen rollers measure 16x8 and carry 215/45 Falken RT615Ks that sit just in front of Endless calipers. The mashing of JDM super brands Mugen and Spoon on a build used to cause countless angry comments among the Honda forum junkies years ago, while today it's widely accepted and those fierce arguments of yesteryear are laughable.

The K20 swap that Omal and Don had embarked on years prior was destined to become a reality as proven by the ultra-clean "A2" swap that now powers his RHD dream car. CJ's Wiring provided a harness that does away with any unwanted cluttered as it snakes along the engine and delivers sensors stealthily to their appropriate homes. Unused factory holes in the firewall were sealed tight and cleaned up considerably with Downstar Inc. billet plugs.

A pie-cut titanium intake and ASP 4-1 header are the stars of the cold and hot sides of the 2.0L and with just a handful of bolt-ons under the command of Hondata's K-Pro, the power figure on the internally stock setup measured a very respectable 230 whp, 156 lbs-ft. of torque.

Step inside and you're surrounded by the plastic and rubber that Honda originally intended, though we doubt they expected a 24-year-old cabin to hold up this well. Scratch-free panels and a dash that hasn't lost its deep black appearance are supplemented by Recaro Pole Position buckets and a Spoon wheel attached to a Checkerd Sports billet hub. That Spoon piece, along with the brand's shift knob, is again countered by Mugen goods in the form of their sport pedals and rearview mirror cover. Behind the rear seats you'll likely spot the Beatrush x-brace and Cusco carbon fiber shock tower bridge that allow plenty of safe clearance for passengers in the back.

A financial analyst would take one look at Omal's decision to sink plenty of hard-earned dollars into a car and shake his head in disapproval. What that number-cruncher doesn't understand is that countless hours of planning and wrenching, along with the feeling of accomplishing a goal like this well-built '96-spec ITR can't possibly be measured with spreadsheets, dollars and cents.