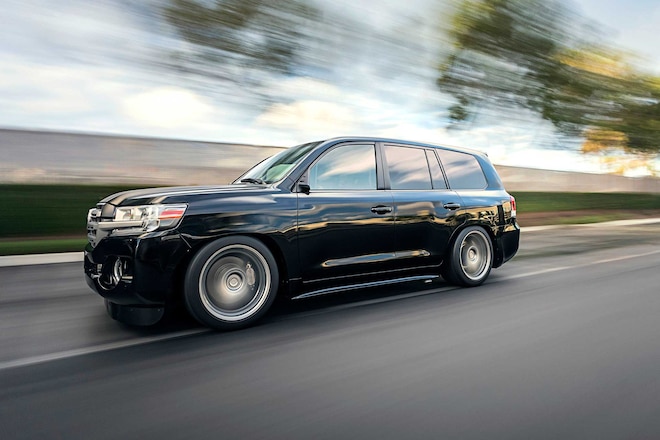 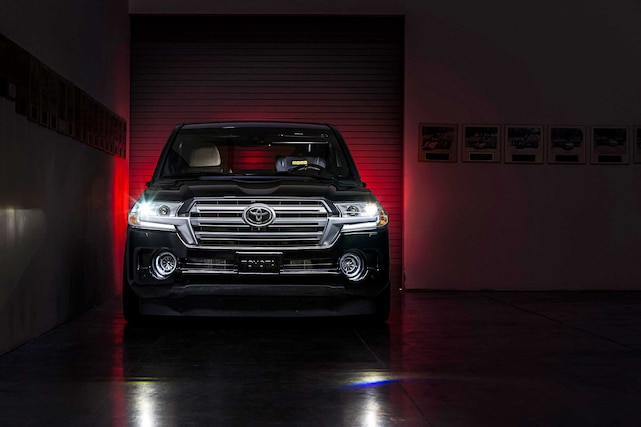 Constructing what the people at Toyota call the Land Speed Cruiser didn't happen in typical SEMA-build fashion. It took years to complete, not weeks. It runs. And it's been abused. Hard. And according to one of the project's spokespersons, Dan Gardner of Gardner Automotive Communications, the Land Speed Cruiser's end goal was a very specific one: to hit 220 mph.

Roughly two years after the project's inception, it's already bettered that goal by 10 mph. Earlier this year, Gardner tells us, a last-minute visit to an airstrip situated within the middle of California's Mohave desert played host to what would become the world's fastest SUV. Here, Gardner lays out the day's timeline and reveals how the drivers responsible for that monumental pass—Grand-Am Rolex GT champion Craig Stanton and retired Toyota NASCAR driver Carl Edwards—made it all happen.

"Prior to Edwards' run, Stanton warmed up the SUV, moving it along at a hefty 198 mph. On his first run, Edwards was able to hit an awe-inspiring 211 mph but found himself running out of pavement to slow the big SUV. More boost was then dialed in to up the power, and he tried again. The next run proved to be the most impressive. Edwards put the hammer down and piloted the Land Speed Cruiser to its jaw-dropping 230-mph record."

Gardner goes on to tell of Edwards' comments following that historic pass: "At 225 mph, the thing was wandering a little bit. All I could think was that Craig said: 'No matter what, just keep your foot in it,' and we got 230 mph." 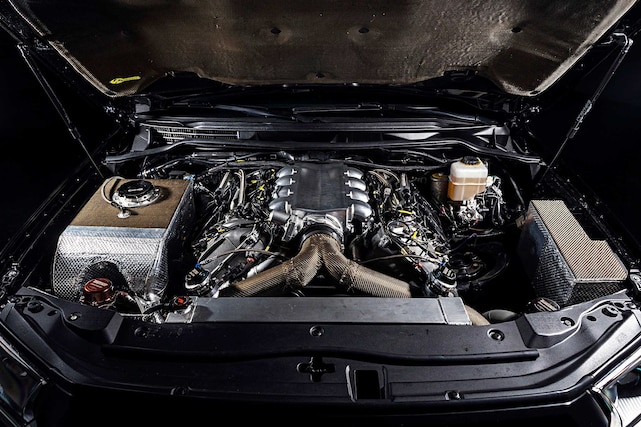 Almost every one of the Land Speed Cruiser's modifications is a result of that 220-mph goal. Its estimated 2,000 hp, for example, wasn't arrived at by accident. Instead, it took smart people like MTC's Chuck Wade, Sam Puleri, Rich Garver, and Marty Schwerter, as well as all sorts of math that took into account the Land Speed's 6,000-pound curb weight and aerodynamics that are no better than a block wall to settle on that number.

Right about now you're wondering how in the world something like the Land Speed Cruiser can reach 230 mph with hardly any aero wizardry. And right about now you're forgetting that the Land Speed Cruiser weighs about 6,000 pounds. Flashy aero like massive rear wings, complicated-looking diffusers, and streamlined under-body panels all do their part in increasing downforce, which is really just another way of forcing those tires down onto the pavement. It turns out that three tons of SUV will do just about the same thing.

"The team found [them] unnecessary," Gardner says about the elaborate sort of aero you're expecting, like a carbon-fiber under-belly, "and allowed for easier work to be done on the car." Instead, aero appointments were made sparingly and purposefully, like the front spoiler and rear diffuser as well as the side-view mirrors that've been canned in an effort to reduce the SUV's frontal area. "It runs like a train," Gardner says, "and almost creates its own downforce, which keeps it stable."

You think that a 2,000hp V-8 underneath the hood of something that came with Crawl Control and can accommodate eight might sound unorthodox, and that's because it pretty much is. But, then again, the people at Toyota's MTC are very good at executing the unorthodox. Here, that sort of thinking starts with the same 3UR-FE engine your mother's Land Cruiser has but with a honkin' Garrett turbo hanging off of each side. The people at MTC keep the eight-cylinder short-block from choking on its own rods by way of Darton sleeves, a forged crank, and forged rods and pistons that when bolted all together are good for a whopping 6.2L of displacement. And that, along with the capability of 55 psi of boost and a MoTeC M800 engine management system tuned at the hand of James Lin, is how 2,000 hp is done. 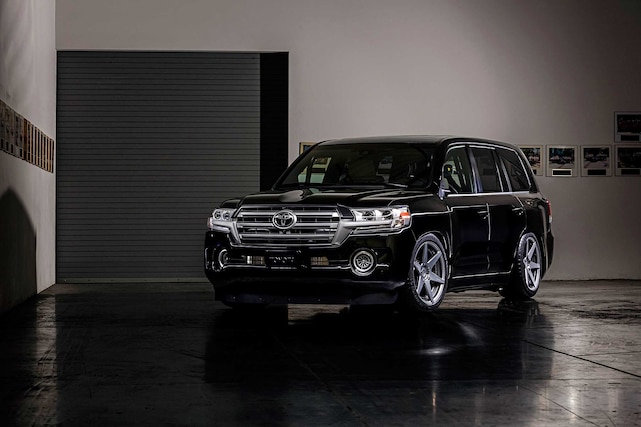 That much horsepower and anything faster than the Land Cruiser's factory-set top speed of 130 mph would be nothing short of lunacy had the MTC crew not addressed things like ride height and damping. But they did, and it's a whole lot more complicated than you'd imagine. For starters, the Land Cruiser and your Civic hatchback are nothing at all like one another when it comes to recalibrating their ride heights. The solution goes beyond a set of bolt-on coilovers and a pair of spanner wrenches.

Here, MTC's fabricators strategically cut up and strengthened the frame to retain clearance for all sorts of important bits when lowered, to make space for wider tires, and to maintain the appropriate suspension geometry. Fox Shox dampers and Eibach springs make their way into the picture and contribute to the Land Speed Cruiser's slammed-to-the-ground stance that's every bit as functional as it is good looking, reducing the car's frontal area for better aerodynamics and lowering its center of gravity for something a whole lot more stable at 230 mph. 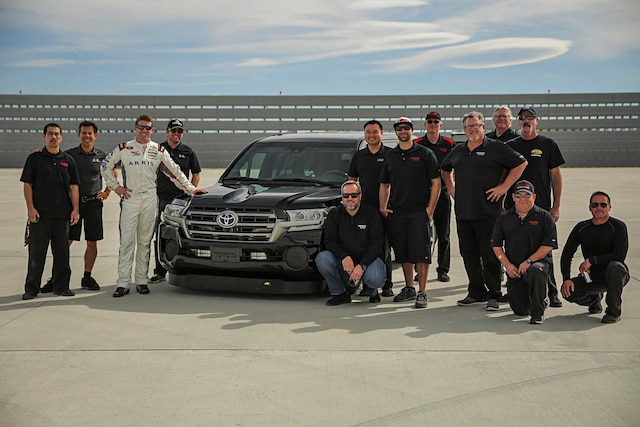 "The Land Cruiser is the pinnacle of go-anywhere performance," Gardner says about the Toyota SUV that's transcended from what was once, primarily, a military-use vehicle to, today, something that doctors and housewives drive before going on to pose the question that started all of this: "Where's the one place the Land Cruiser has never gone before?" 230.02 mph, that's where. 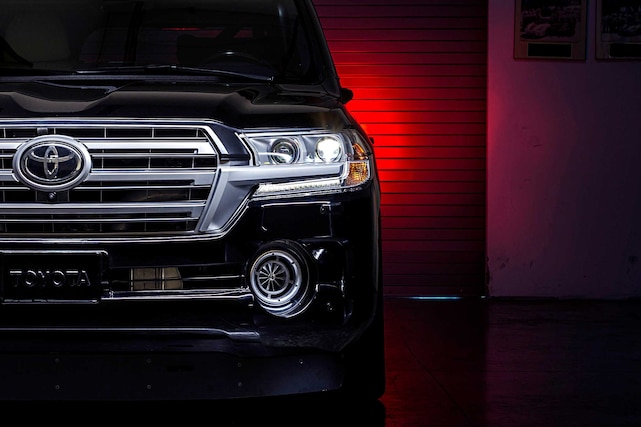 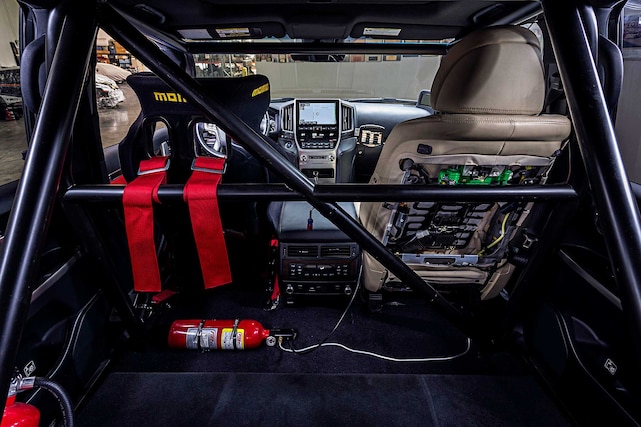 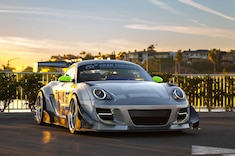