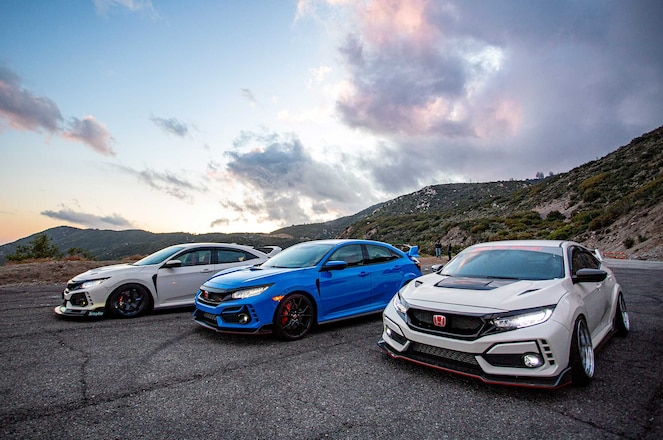 Over the last two years, American Honda has sold more than 13,000 FK8 Civic Type R hatchbacks. It's the fastest Honda brand vehicle ever sold in the States, and the CTR has defied critics disapproval of its front-wheel-drive layout and 2.0-liter turbo four-cylinder. At launch, the FK8 smashed the FWD N rburgring record with a lap of 7:43.8 (not to mention was faster than a Z06 Corvette and BMW M2). Despite having "only" 306hp, its VTEC powertrain is very efficient, putting out 153hp per liter with its wicked fun, high redline of 7,000-rpm. It's also one of the few pure driver's cars that only comes in a six-speed manual transmission option. Track-proven performance along with its ability to sit four passengers or fold the rear seats down for more cargo space, it's earned the crown as today's ultimate hot hatch.

LIST OF CHANGES & UPDATES TO THE 2020 HONDA CIVIC TYPE R 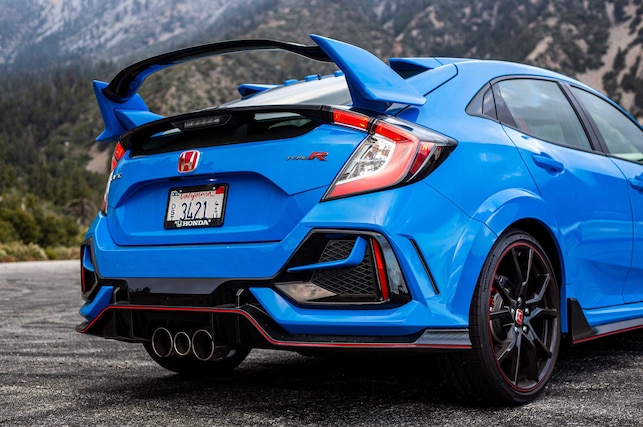 Last February, Honda revealed a major midcyle refresh for the FK8 at the Chicago Auto Show and we're told 2020 models have already been on sale at dealerships for the last month and a half. The main changes and updates are as follows:

The FK8 Type R was already a great car to begin with and I always felt its speed was underrated. It's a front-wheel-drive hatch that doesn't have traditional torque steer thanks to a well-engineered suspension geometry and standard limited-slip, plus it offers plenty of grip and control whether on a road course (I've completed two non-competitive track days) or backroad canyons. After reading up on the refresh, I didn't expect a huge change in driver experience. They are simply minor adjustments to make the car handle slightly better (suspension tweaks) and take more abuse (cooling modifications and better front brakes). In my short, one-week loan of the car the alcantara steering wheel surprisingly makes a huge difference in comfort as well as the front brakes, which engage much sooner. 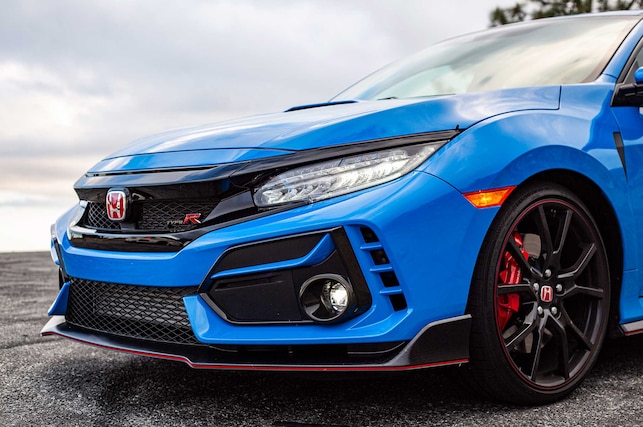 The steering feels razor sharp and the handling makes me only want to drive this car on Angeles Crest Freeway, but as far as a very noticeable difference from the 2018 or 2019 models, I would have to drive them back-to-back to truly compare. As far as the inherent issue of Type R's overheating at the track, I never abused these cars long enough to experience this in the first place; however, it still remains a hot topic in the Type R community, which is one of many reasons why I decided to interview two current Championship White FK8 owners, Jeffrey Ting and Justin Saiki, about their feelings on their own project cars and the new midcycle refresh.

What project cars did you own before your Civic Type R and were you always a Honda guy?

JT: I actually started with Honda, toyed around with a few other cars and toyed around with motorcycles for a little bit. But once the CTR came to the states, I knew I had to satisfy my inner Honda fanboy. Here's a list of my last few vehicles in chronological order: 2000 Civic Coupe, 1996 Nissan 240SX, 1991 Acura Integra GSR, 1996 Civic Hatchback with a K20A swap, 2007 Fit with a Kraftwerks supercharger, 2009 Civic Si, Civic Hatchback with a K24A2 swap, Honda CBR600RR, BMW S1000RR, 2015 Toyota FR-S with a Kraftwerks supercharger.

JS: The Civic Type R is my fifth build and it's currently my daily driver and track car. I've been modifying cars and competing in shows for 18 years. Past builds include a widebody 1996 Civic coupe, 2005 WRX STI, widebody 2012 Abarth and 2004 M3 that I still own.

What drew you to the FK8 in the first place?

JT: Honestly, the heritage was huge. I love what the red "H" represents and the history behind it. If we don't count that, though, I think the top three things (in no particular order) are: First, is power. A Honda with torque? Sign me up! Second, handling. This thing handles better than it should, and you have to drive it to understand. Third, wild-good looks. I know this a polarizing attribute, but I love how the Type R looks, especially mine!

JS: The fact we were getting another Type R in the U.S. The flexibility of being an extremely good daily and weekend track car. 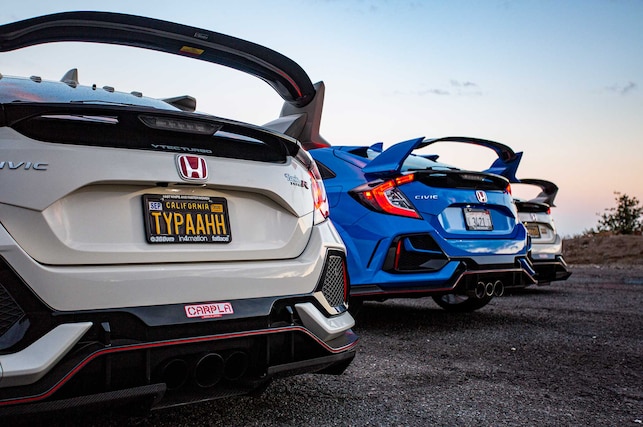 How long have you owned your Type R?

What don't you like about Type R and what would you tell Honda to change about it?

JT: First, the horrendous and brittle 20-inch wheels. Those needed to go like yesterday. These are honestly the first Type R wheels that I do not like at all. The second thing I don't like about the Type R is the sound. Even with the aftermarket's help, the car still doesn't sound pleasant. Third, and probably biggest thing for me, is the overheating issue. I know the 2020 adds a slightly larger radiator and a higher flowing grille, but I have more than that done to the car and it still overheats at the track. I've talked to a lot of potential buyers and whenever I bring that up, it turns them away big time.

JS: Give us a better transmission with a stronger second and fourth gear. The exterior took some getting used to, but it's grown on me. I just think of it as a Gundam on wheels...

To new folks joining the FK8 community, what would you advise them to modify first?

JT: Those hideous wheels and monster car stance need to go. Wheels, tires, and a drop improves the aesthetic of the car astronomically!

JS: Cut the fenders up to fit a wider track! Just kidding... Haha! Exhaust, though, as the stock one is really quiet.

Now that you've seen the 2020 refresh in person, overall feelings about it?

JT: Considering this is just a mid-cycle refresh I think they did a ton. I don't mind the new changes. I think the changes to the exterior are mild but help address the controversial "fake vents" quite nicely by breaking up that negative space and continuing the lines of the body. I also love the new LogR app that data logs the car's performance and the addition of an oil temp gauge. For those things, I'm quite jealous of the 2020 model.

But I mean, if Honda had fixed the overheating issue somehow, I'd probably strongly consider trading mine in!

JS: I appreciate all the changes and just happy Honda is back with a modern performance car. I think for a refresh, it hits all the right notes to continue growing the Type R brand in the U.S. The infotainment with the track recording is something I'm jealous of. Haha! 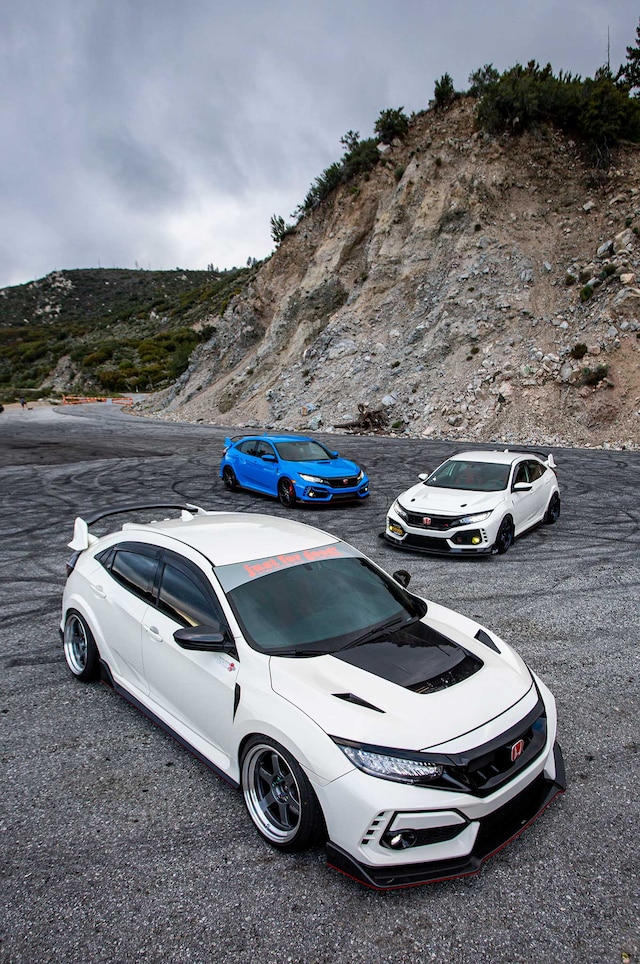 WHAT TO LOOK FORWARD TO

There's no question Honda engineers, and product planners knew what they were doing. With two years in the books, FK8s are flying off dealer lots (most over sticker MSRP), the community regularly beats them on the track with much satisfaction, and the aftermarket industry offers a countless number of performance parts for the turbocharged Type R. We can't imagine Honda doing anything drastic to swap out the potent turbo K20 four-cylinder or switch to an all-wheel-drive system, but that doesn't mean nothing cool will be coming in the future. Take the upcoming 2021 Limited Edition model for example, which is said to be lighter as well as wear the Integra Type R's iconic Phoenix Yellow paint!