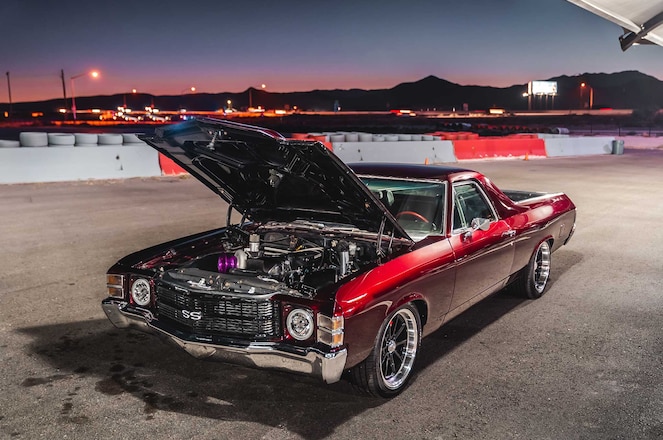 The Supras in Vegas car show last year saw more than 150 Toyota Supras from 16 different states and I had the pleasure of presenting the top four cars a special award courtesy of ENEOS. Three of the winners were Mk4 Supras, all powered by the always awesome 3.0-liter 2JZ-GTE inline-six. The fourth winner was this 1972 Chevrolet El Camino. Now, I know people have plopped a 2JZ into a lot of things, from a 300ZX, Hilux Pickup, S14 and RX-7... But an El Camino?! This was new to me, and I just had to give props and chat it up with its lead builder, Andrew Carroll, who's co-owner of XAT Racing (Toyota V8 specialists) and the director of operations for the SupraStore.com.

1-ON-1 INTERVIEW WITH ANDREW CARROLL

Can you give us a little backstory behind your affinity for Supras?

I built my first project car in 2003 when I bought a JZA70 front cut and swapped my Mk3 Supra. I was the first in the southeast to have a 1JZ Supra at the time. After I sold that car, I moved on to the 240SX game and started drifting before it was what the cool kids did. In 2005-2006, I was a top amateur driver in Florida, drifting alongside Formula DRIFT drivers at the time. I was even in the Slide America DVD when they came to Tampa. Our crew killed it! 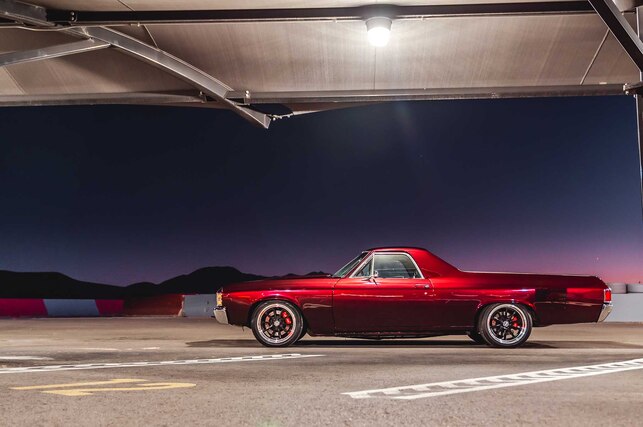 I do remember that video... Major throwback! How'd you get involved with running a shop?

In 2007, I acquired XAT Racing from the previous owner and went to an online-based sales setup. I'd sell built engines and parts for Supras and Toyota people. In 2008, I swapped a Lexus 1UZ V8 into my 240SX and it was one of the first UZ-swapped 240s in the U.S. I moved on to a lot of R&D for that engine and helped gain XAT a reputation for providing the world's best parts and transmission adapters for the UZ engine. We've since expanded, running SupraStore.com for just as long, and offering more high-end parts at XAT such as our own proprietary billet camshafts dry sump kits and ITBs. We have a little private shop in the country that we operate both companies out of. 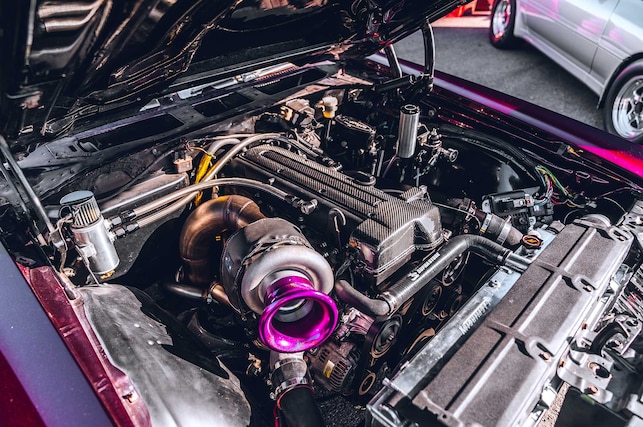 So, how in the hell did you come up with the idea for this El Camino?

The car came to be when my business partner Mark Tozer and I were having a chat on fun projects and possibilities. He mentioned that he always wanted a 2JZ El Camino, especially a 1972 SS faced version. I told him to hurry up and find one. After a few months of looking, Mark found the perfect donor car for the project, but to be brutally honest, this was no Cinderella story... She looked great, but man, that was one scary car to drive. The car shook driving down the road. Brakes? The brakes just made it shake worse. Gas pedal? More like 'slow and loud' pedal. This was literally the slowest V8 I've ever driven! The two barrel 350 made about 120hp, maybe. So, after driving the car and realizing this old girl needed tons of work, I agreed that I'd do the swap for him as an advertisement piece for both our companies.

The swap was fairly straightforward. The only major hurdle was the fact that the transmission did not fit at all. I could have made it work with some ugly engine angle but I would never swap an engine and not have it visually appealing. So, I cut the whole trans tunnel out, made my mounts from scratch and then set about making a new trans tunnel. After coming up with the shape, I cleaned up all areas to be welded and fully welded the new tunnel in. After welding inside and out, the area was primed, sealed then painted. 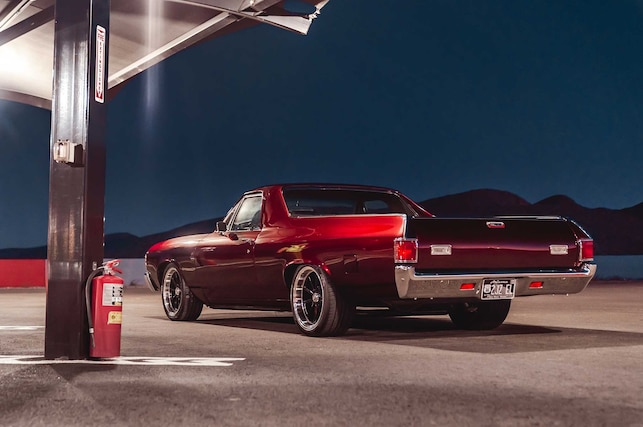 What are some of the other major upgrades you made?

I replaced the old fuel tank with a new EFI-style tank. It uses a 450lph pump now and runs new stainless lines with a filter to and from the new engine. I also made a complete under bracing setup to strengthen the chassis, as well as act as a driveshaft loop for protection, should the shaft ever snap or break a joint. The rear axle was a basic drop-in unit after we assembled the housing and third member and axles. We did have to adjust the pinion angle to correct position, then had a thick-walled single-piece driveshaft made.

The intercooler and blow-off valve setup is pretty trick. Can you elaborate?

When starting the front-mount intercooler location, I wanted the setup to have the shortest piping I could manage as well as be hidden. I placed the cooler in front of the radiator in the core support area, and hand-made piping that fits like a glove. I added the blow-off valve to the end tank of the core to further hide the workings. Piping is all a single-piece and hand TIG-welded. The pipes were then coated in wrinkle black.

How about the engine management setup?

I didn't want to run a big harness on the back firewall, so knowing the ECU is weather tight, I knew I could find a solution that would keep things clean. I made a mount for the ECU and welded it to the inner fender. The ECU and the ignitor would be cleanly mounted yet easily accessible if any tuning or work needed to be done. All relays and power cabling are affixed to this location too and tucked behind so all you see is the ECU and ignitor.

The exhaust isn't your standard issue equipment I assume, either...

I wanted to keep it a true hotrod, so I left the mufflers and resonators on the shelf. I hand TIG-welded the 4" downpipe that converts to dual side-exit on the passenger side before the rear wheel. To me, it's perfect. 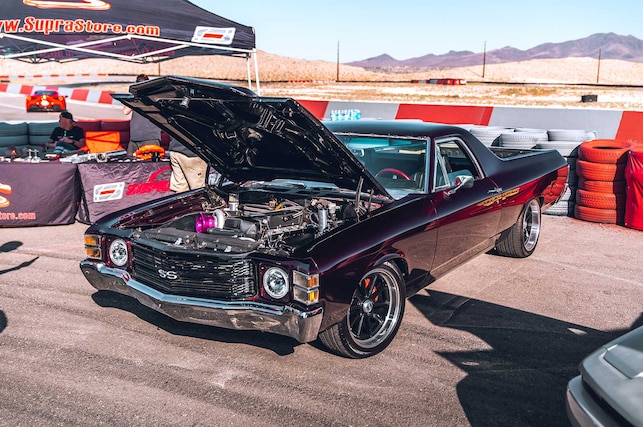 The car drives awesome! The coilovers, big brakes and chassis work all equate to a much better driving car than what came in the shop. It has the reliability of a Toyota and the power of a Supra, but the amazing old school feeling only a vintage car can give you. It's almost like cheating.

Can you 2J anything after this point?

Well not to brag but going into the swap I knew I could 2JZ anything already as I have been playing the hardcore car modder/fabricator game for quite some time. It was nice to have a little validation project that gets some spotlight, and of course, I'm always trying to outdo myself. I'm always looking for the right customer that wants something absolutely nobody else has... That's hot-rodding to me. 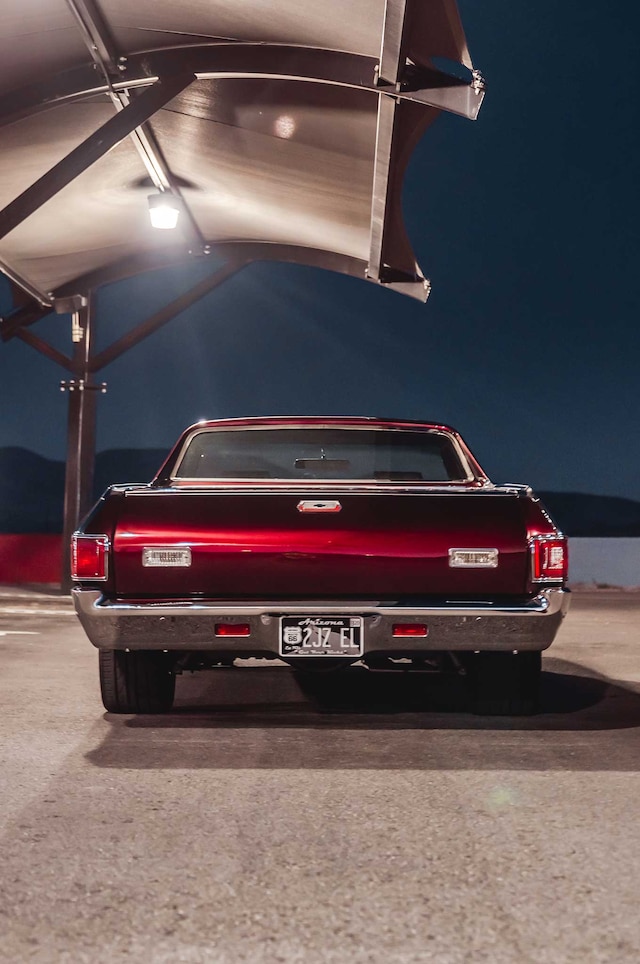