Who Says Engine Mods Are The Only Way To Go?

Maybe if the car were Diablo Orange, it could have drawn more attention. But as it was, having been painted a factory VW red, this Mk 4 GTI seemed to distract people quite well. Granted, the engine is mostly stock, but what really counts in life: getting more speeding tickets, or being noticed at every stoplight?

To be fair, the Mk 4 VR6 engine has been overlooked by aftermarket tuners as a whole, leaving those that purchased a car with the powerful engine out in the cold. With only a handful of motor mods possible, Mark Bielic, the owner of this 2000 GTI VR6, did the best he could. The power has been increased by a negligible amount, but the sounds the Neuspeed cone filter and exhaust uncork give the normally subdued engine a little more grunt. Well, maybe not grunt; as anyone who has a Neuspeed exhaust on their GTI knows, the exhaust lets loose a thunderous boom when the throttle is opened.

Riding shotgun, however, my mind was less on performance and more on aesthetics. From the outside, the projektzwo body kit and Freedom Design rear wings dress the car well—that’s kind of an understatement. The HID headlights with their three separate housings, one containing the HID bulb, one the brights bulb, and the third the turn signal, changes the personality of the car completely. You either love the lights or you hate them—for me, there simply isn’t a sweeter light upgrade available for the Mk 4. The front of the car was finished with a clean projektzwo front bumper and a projektzwo grille, and with all three combined, the front transformed from a meager VW into something really, really mean.

Out the rear, the twin Freedom Design hatch-mounted spoilers, one resting at the top of the window and the other at the bottom, are barely visible. Pop the hatch, however, and you can’t miss where Mark spent a lot of his time. In the trunk are two Soundstream amps, two Scosche EFX 1-farad capacitors, and one huge 15-inch Kicker XPL woofer. The stereo components peer through the trunk carpeting, utilizing the space the spare tire used to call home. All the audio power components are wired into a Panasonic head unit and ultimately play through not only the massive trunk-mounted woofer, but also through the Infinity Kappa speakers placed in the factory enclosures. The result of this mixture of speakers is excellent mids and highs, with the Kicker supplying ample thump.

With the exception of several points-gaining show items, such as the aluminum doorsills and the matching aluminum dash treatment, the cockpit itself is relatively stock. Don’t get me wrong, though. Mark was building upon an already competent factory interior setup—and in my book, the addition of the TT pedals should be a required mod, as the TT pedals are some of the best available and cost a fraction of many aftermarket ones.

Despite all that has been modified, my favorite part of the car is the exterior. The appearance is a wilder version of stock without boy-racer air inlets, wild front spoilers—although the beak-like grille does push the limits a little—or a crazy paint treatment. However, underneath the subtle body pieces is a touch of extreme. The wheels are projektzwo ones, finishing off the primarily single-brand scheme, but look closer. The rear tires measure a massive 255mm wide sitting on 10-inch wide wheels. It’s little touches like this that place this Mk 4 apart from the crowd.

The components on this car have been assembled seamlessly. The body kit, the stereo, the interior—everything matches and complements the others, making this an extremely clean GTI. The engine isn’t where the beauty of this car lies, as the beauty lies in the bodywork and the fluent stereo that not only looks the part but also manages to reproduce sounds so clear that you’re scared to listen to any other car stereo. Then again, considering the attention you get cruising in the car, it’ll take a lot to get you out from behind the wheel. 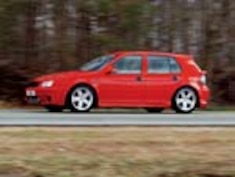