The great thing about Japan is that there are jaw-dropping builds almost everywhere. Some are well known and receive a lot of Internet exposure, but some are hidden from the spotlight. They're equally as great—you just have to look a little harder to find them. Luckily, we have some great contributors who know a guy who knows a guy to help us find epic builds from some of the most quiet places in Japan. This 1998 Mazda RX-7 is one such undiscovered gem.

The owner, Kazuyuki Takahashi, is the man behind a tuning shop located in the Gunma Prefecture of Japan. Gunma isn't exactly a small area; it just isn't particularly as popular as some of the more well-known regions where car culture thrives. The name might sound familiar if you've ever watched Initial D, as it's the same location where the comic unfolds. For Takahashi, it is simply "home" and a playground where he operates Technical Auto Ones, better known as "T-Ones." The name itself is a little odd, but it's actually derived from 0.1T (unit of measure for ton). According to Takahashi-san, it's a running joke amongst his friends because of his weight. 0.1T equates to about 200 pounds, which is what Takahashi-san tips the scale at. He's been known to consume his fair share of Tonkatsu (Japanese breaded and fried meat) and even has a local eatery by his shop where everyone seems to know him by name.

Takahashi started T-Ones 11 years ago after leaving his former employer. The tuning scene in Japan had experienced massive growth during the early 2000s and the market had become oversaturated. He started losing work so he branched off and created his own specialty shop that focused mainly on rotary engines. He had a particular affection for Mazda-built motors from an early age because of how unconventional they were. T-Ones dedicated its time catering to the piston-less Wankel before eventually growing into a shop that did just about everything.

Photo 7/16   |   Interior stripped to the bare essentials for time attack.

His own personal circuit missile was built from the ground up in-house. From the engine modifications, tuning, all the way down to the very minute specifics of the suspension dynamics are all a product of T-Ones. Kazuyuki has stripped the car down to about 1,085 kilos (2395 pounds) and, despite his 200-pound frame, he is able to pilot the car through Japan's famed Tsukuba Circuit at an incredible 55.237 lap time. Anything under a minute at TC2000 is considered a great achievement, but by next year, he's set on surpassing that and going under the 55-second mark. Make no mistake, there's nothing secretive about what he does—what you see is what you get. His FD3S is just a finely tuned machine that makes power without sacrificing the agility the RX-7 is known for.

Pushing more than 550-plus horsepower is a side-port 13B with a hefty Trust T88-34D turbine. Filling up a majority of the front nose of the bay is a custom V-mounted Blitz intercooler with custom piping. Fuel delivery comes by way of twin Bosch pumps that send race gas to four 1,000cc injectors. A rare (and now discontinued) five-speed HKS sequential transmission is responsible for getting all that power to the Advan Racing wheels and meaty Advan A050 rubber. A Brembo F50 big brake upgrade ensures that Takahashi's FD stops at a moment's notice. Dampening force originates from made-to-order T-Ones "Addict Damper II" coilovers. Within the confines of the cockpit is where the weight reduction is most apparent. Creature comforts have been expunged for the sake of 55-second lap times, and rightfully so. Other than the dashboard, gauges, and shifter of the sequential gearbox, all you will find is a steering wheel positioned in front of a single Recaro seat. Visual stimulation besides what is in front of the windshield is bare panels exposed from the lack of carpet and door cards.

The exterior of the T-Ones FD3S is a perfect marriage of form and function. Mazda tuning idol RE Amemiya is perhaps one of the most highly respect names in the RX-7 community, so it only makes sense to send the car out to battle fully adorned in its armor. Every removable panel of the stock-body RX-7 has been replaced with lightweight, functional, RE components from the bumpers, hood, fenders, and even doors. A custom rear carbon diffuser helps channel air through the vehicle and an Esprit rear wing creates the necessary downforce to keep the car planted firmly on the circuit. Adding intrigue to the build is the reasoning behind the bright orange tone of the body. Takahashi-san explained to us that he opted for this specific color way to represent both his shop and his car in homage to Jiyan (ジャイアン), the big bully from the classic Japanese Doraemon comic series. The character is often seen in orange, and Takahashi himself is a bit of a "bully" because of his stature, so it just made sense. Seeing how menacing this RX-7 is at Tsukuba, it's safe to say it is a bit of a big bully itself.

Builds like this are exactly why we must remind ourselves to continue to uncover the great automotive gems that exist, and often lurk, in Japan. It's quite fortunate for us to be able to sit down with him, even if for a few brief minutes, just to learn about his exploits in the community.

Honestly, where else would you hear about a slightly overweight RX-7 specialist from an area of Japan that you've probably never heard of, who happens to have a deep love of Katsu and dated Manga characters? Do we need to remind you that the car is also a terror on one of Japan's most respected and famed racetracks? Our ongoing search to find these automotive treasures and their owners continues. If you're just as intrigued as we are, stay tuned—there's plenty more to come. 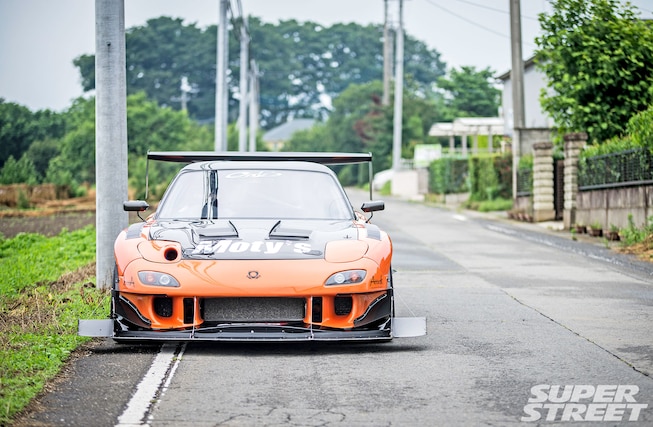