Urban Driving With an Industrial Edge

I ’m a chowhound. I love to dine and eat. I try new places and stand by old haunts. For instance, I have one cafe in particular that’s my SoCal favorite. There’s a ton of items on the menu that never fail to make my mouth water just by their descriptions alone, but sure enough, I always end up with the smoked-salmon sandwich. I guess you could say it’s perfect for my tastes, since I can’t seem to pass it up whenever I’m there. In his own way, Wassim Al-Zein and I are very much alike. The only difference is his passion is building cars, and his all-time favorite is the Volkswagen Corrado—previously owning a G60 and now the VR6.

Unlike the master chef who creates my favorite sandwich, Wassim had more challenges to overcome during the buildup of his ’93 Corrado. You might say that smoked salmon is easier to come by than Corrado parts, especially since the Corrado is considered in this day and age to be an “older” car.

The stock 2.8L VR6 engine didn’t need too much of Wassim’s attention, but he did take care to have the intake manifold ported and polished. Other modifications include a Eurosport Cool Flow air intake, a Techtonics exhaust, Beru spark plugs, and Eurosport spark plug wires. With these upgrades, estimated horsepower and torque numbers are 190 and 195 respectively.

No driveline modifications were made, but to bring this MRyde to that next level of urban cool, By Design of West Los Angeles, California, was tapped for the suspension mods. H&R springs were placed in the front and rear, and the Corrado was lowered a total of 1.25 inches. For increased stiffness and driving stability along the Santa Monica Freeway or while cruising Sunset Boulevard, Wassim bolted on Neuspeed stabilizers and strut braces front and rear. Next, 17-inch OZ Monte Carlo wheels in white were paired with Toyo Proxes tires for a clean but polished look. The stock brake pads were also changed to aftermarket Ferodo pads.

For Wassim, the most unique details are the interior modifications and taillights. In addition to upgrading the seats to leather and adding AMS gauges, an X2 steering wheel, and a MOMO shift knob and pedals, Wassim also stripped the carpet. In its place are aluminum floorboards, which accentuate the other interior pieces and bring the interior together with an almost industrial flourish. Designwise, a JT/Strictly Foreign RS body kit, a JT Engineering Cosworth-style rear wing, and Strictly Foreign Stinger lighting are important elements that take the Corrado to an even higher level, giving it that extra push to edgy. The final touch is the Satin Silver paint, applied by Perry’s Autobody in Los Angeles.

Who can stand L.A. traffic without some tunes? I sure can’t, and Wassim is in complete agreement. To make sure his drives are kicked up a notch, an Alpine AM/FM/CD head unit was mounted into the dash, and a 10-inch Kicker sub, Sony and Rockford Fosgate amps, and MB Quart and Pioneer speakers were tucked throughout the door panels and trunk. In and out of the show circuit, this Corrado always manages to grab your attention. All in all, this Euro was definitely a labor of love and showcases Wassim’s talents. Like he says, though, when problems arise, you’ve got to keep on trying until you get it right. Now that’s perfection. 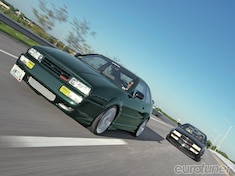 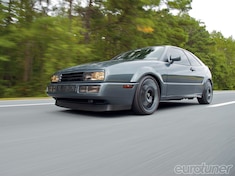 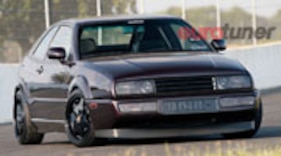