Home  |  Features  |  A90 Supra vs. M2 Competition Track Battle
Subscribe to the Free

Newsletter
Sign Up today for our FREE Newsletter and get the latest articles and news delivered right to your inbox.
features

Motor Trend answers the question, who builds the better BMW – BMW or Toyota?

Troll all you want - at the end of the day we're just happy Toyota continues to throw bones to the ever-loyal J-brand enthusiast, like they did with the Mark V Supra. Yeah, we know the A90 is basically a differently skinned new BMW Z4 (both come from the same factory and use many similar parts), triggering what has been up to now a mostly laughable barrage of feeble badge engineering jabs. But origin only tells part of the story, because when it came to tuning and calibrating the MkV, that was all Toyota.

During filming of its recent Best Drivers Car slate of programming, the dudes at Motor Trend found themselves in the spot of having two comparably matched "BMW" - a track-centric M2 Competition and an A90 Toyota GR Supra Launch Edition - at WeatherTech Raceway Laguna Seca, with pro driver Randy Pobst on call. It was the perfect opportunity to find out via hot-lap hustle who builds the better BMW (or at least the quickest around Laguna) — BMW or Toyota?

Powered by the M3's S55 3.0-liter turbocharged inline-6, the M2 Competition makes 405 hp and 406 lb-ft of torque, putting its power down through a seven-speed twin-clutch automatic. The M2 Competition also gets upgraded brakes, carbon-fiber bracing, and aluminum axles. By the numbers, it'll sprint from 0 to 60 mph in 4.0 seconds, through the quarter mile in 12.4 seconds at 114.7 mph, and lap Motor Trend's figure eight test in 24.1 seconds at 0.82 g average. 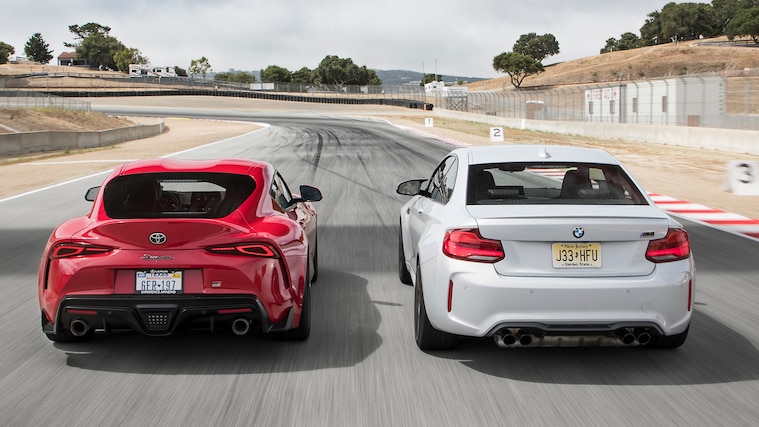 Under this Supra Launch Edition's hood sits a BMW-sourced B58 3.0-liter turbocharged I-6 making 335 hp and 365 lb-ft of torque. It drives the rear wheels through a quick-shifting eight-speed automatic gearbox. Thanks to its light curb weight—the Supra, at around 3,400 pounds, weighs about 200 pounds less than the M2—the Toyota is quick on its feet. It accelerates from 0 to 60 mph in 3.9 seconds, through the quarter mile in 12.5 seconds at 111.2 mph, and it laps the MT figure eight in 24.0 seconds at 0.83 g.

Care to wager which is quicker around Laguna Seca? Watch to find out.

Unicorn 1991 Isuzu Impulse RS Turbo All-Wheel Drive with Handling by Lotus Up for Sale
You're looking at one of the rarest sports cars to come out of Japan during that country's fantastic era of wild engineering in the '80s and '90s
Alex Kierstein – Apr 6, 2020

10 Classic JDM Cars You've Probably Never Heard Of
There are Japanese classics, and then there are these old-school JDM oddballs - educate yourself on some uncommon J-spec machinery.
Alex Nishimoto – Apr 3, 2020

Street Legal R30 Nissan Skyline Coupe Painted Millennium Jade w/ 300hp Turbocharged 4-Cylinder FJ Engine
It takes an extraordinary type of Nissan buff to import a JDM Skyline, especially one that's not on everyone's wish list, however, one that is just as iconic as the GT-Rs we all hold in such high regard.
Sam Du – Apr 3, 2020

A90 Supras of the 2020 Tokyo Auto Salon
features