How the custom-built 416-hp vintage Corolla came to be and what it's like to pilot the beast.

From the Editors of Super Street: You know we love us a good engine swap and this one's a beaut—a 1969 Toyota Corolla with a 2010 Lexus IS F powertrain. But what's under the hood only scratches the surface, as our homies over at MotorTrend learned, with this particular project requiring quite a bit of strategic hacking from builder Ryan Millen, among other feats of fabrication, in order to get everything to gel perfectly. Writer Miguel Cortina sorts out the story's details...

What is this thing? I ask myself this as I deliberately drive the speed limit in an immaculately restored 1969 Toyota Corolla up Interstate 15 toward Victorville, California. From the outside, this looks to be a pristine vintage Corolla. But a closer look reveals so much more.

The first clue are the wide fender flares that give it a more muscular look. Toyota connoisseurs with eagle eyes will then notice that this Corolla is a bit wider and longer than when it rolled out of the factory. Peering inside, its push-start button, Lexus infotainment system, and sporty seats are by no means from the year of Woodstock.

Then, from under the vintage sheet metal, comes the deep, throaty note of a V-8 engine and the swift shifting of a modern eight-speed automatic. This car has definite head-turning appeal. 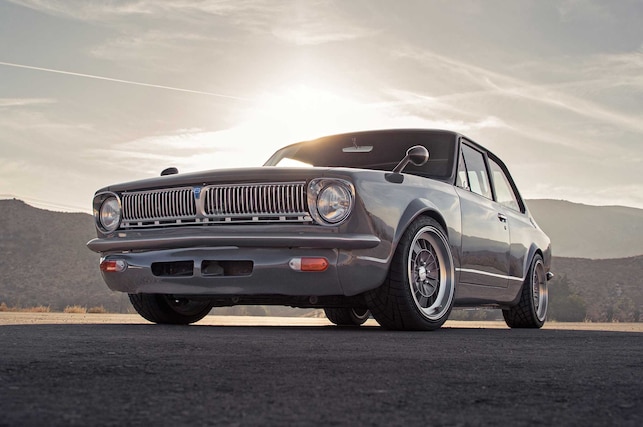 So, what is it? Its official name is the 1969 Toyota Corolla IS F V-8. The more complicated answer is that it's a restored first-generation Corolla with a 2010 Lexus IS F powertrain and chassis. That alone should arch your eyebrows. But it's the story behind it that truly matters.

Racer and tuner Ryan Millen, whose brother Rhys is known for being a top competitor in drifting, built this piece of art for Javier Quiros, a well-known Costa Rican businessman whose father, Xavier Quiros Oreamuno, started Toyota's fourth-oldest distributor in the world. That's where the back story starts.

Xavier started his business importing American Motors and Toyota cars into Costa Rica. Back in the '70s, Costa Ricans enjoyed racing around a soccer stadium, but Toyota cars were always left in the dust. Having access to both automakers, Xavier had the brilliant idea of putting a Rambler American Scrambler V-8 in a 1967 Corolla. The engine swap didn't help the Toyota at all, and after the car was retired Javier bought it and drove it every day on the streets of San Jose when he attended college.

"It was the worst!" Javier told MotorTrend. "The cabin smelled like fumes all the time, and it was really uncomfortable to drive." After three years, the car was sold. 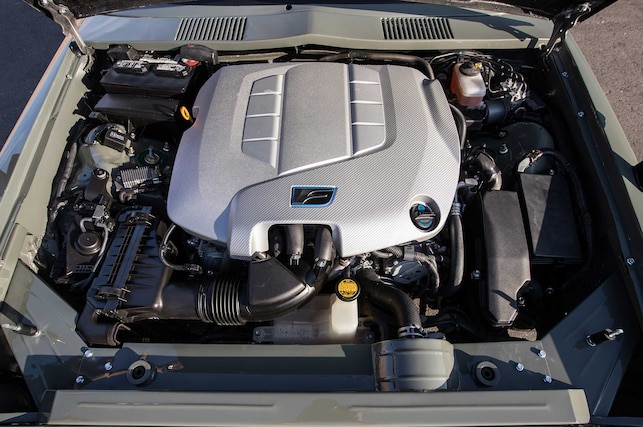 Over the past few years, a nostalgic Javier had been looking to retrieve his father's car from the junkyard of history.

Unsuccessful in his quest, Javier decided to create his own version—this time with Millen's help, and with a different approach. Millen didn't want to re-create the exact same vehicle, given its high costs and hard-to-get-parts. Quiros also wanted the car to be as reliable and as easy to fix as possible. And because the Lexus IS F came with a reliable V-8, Millen proposed to have a 1969 Corolla body married to a 2010 IS F chassis and powertrain. What started as a dream for both quickly became a 12-month project for Millen.

The result is this one-of-one 1969 Toyota Corolla with a 5.0-liter engine that sends an eye-popping 416 hp and 371 lb-ft of torque to the rear wheels via an eight-speed automatic. Even today, a modern-era, top-spec Corolla doesn't make even close to half that kind of power. 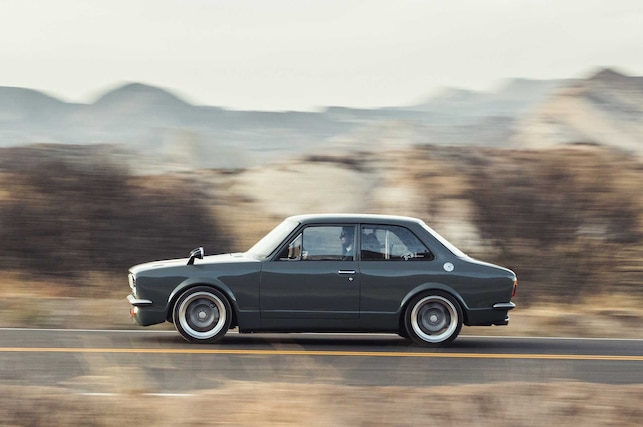 But in order to accomplish his goal, Millen had to cut the Corolla's body in half and add about 11 inches of width and 3 inches in length; the donor Lexus' wheelbase was shortened by 14 inches. That, of course, presented many challenges as Millen hand-built the fenders and front fascia and fabricated the trunk and hood out of fiberglass. The windshield and backlight are pickup truck windshields, and Millen sourced other parts from all over the world—an extra grille for splicing came from Japan, the emblems from Spain.

The Corolla made its way from Quiros to Millen's shop in Huntington Beach, California, while the IS F's chassis and powertrain were bought elsewhere in California from a car that was totaled in a traffic accident.

"I've built plenty of race cars in my life, but those are way easier to build than this," Millen said during an interview with MotorTrend. The hardest part, he said, was getting the proportions correct. He recalled having a thorough plan and thinking ahead before making his next move. "It's pretty wild when you have the idea of what you want to do and then begin actually doing it."

Millen developed the car with the goal of making this Corolla a comfortable but sporty cruiser. Quiros is known for daily driving the dozen-plus cars in his collection, and this special Toyota will not be the exception.

The adjustable spring rates were tightened for our testing at Auto Club Speedway, but Millen said that once the car is shipped to Costa Rica, it will be less stiff to drive. Although the powertrain was left intact, Millen added Borla mufflers and redid everything.

The Corolla was properly customized to Quiros' liking. The chrome trim and side marker lamps have been tastefully deleted. Even Toyota's big boss and Quiros' close friend, Akio Toyoda himself, had some input with the car—he suggested the Corolla be finished in a different tone of green. After a handful of color reviews, Quiros and Millen chose the Olive Green exterior paint.

So how does Millen's baby handle under MotorTrend testing? "It's happy to drift and exit corners at whatever power oversteer angle you wish," testing director Kim Reynolds said. "Very communicative and obviously good power." 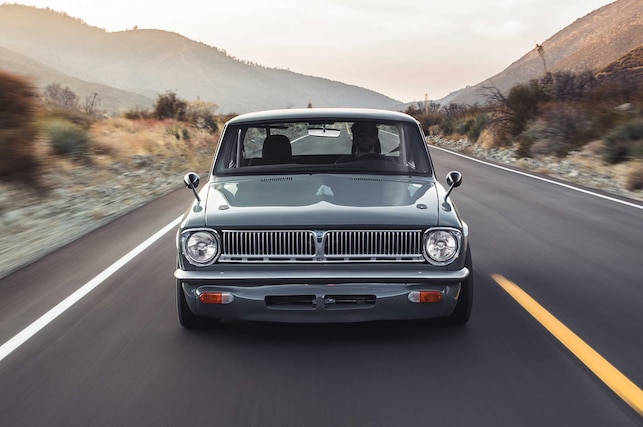 Road test editor Chris Walton was pleased with the way the engine behaved: "Once underway, the engine really comes alive and roars. Upshifts were very smooth, though slowish by today's standards. In the end, the acceleration was right on top of an IS F. Fun!"

The lack of ABS, however, made the Corolla a bit difficult to control when entering the corners, causing the rear to fishtail a little bit. "It's OK to deal with that in an open parking lot, but on a narrow road it could get dicey," Reynolds said.

Millen said the car will have full ABS before it's shipped to its owner in Central America. But when I got a chance to get behind the wheel on the freeway, I was extra cautious with my speed, lest I have to give more than moderate brake pedal pressure. Its 5.0-liter engine responds well to all throttle inputs, and I was particularly impressed by the deep growl of the IS F engine in this application. Press on the throttle, and its profound sound will turn heads. Even when going up the demandingly steep Cajon Pass, the Corolla was happy to pass the lines of struggling 18-wheelers and delivery vans. 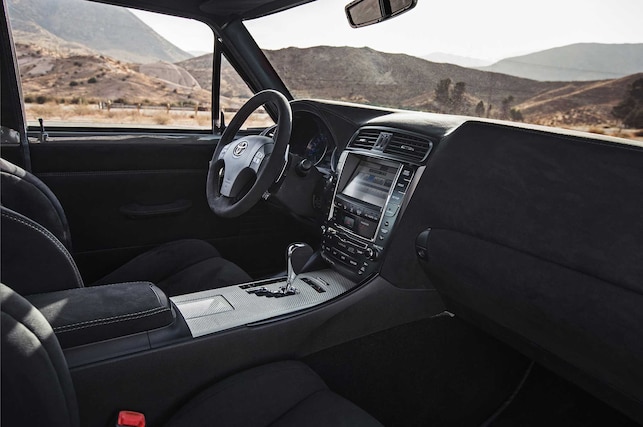 But besides its handling, what impressed me the most was the bizarre juxtaposition between the interior and exterior. Although the exterior is vintage and well restored, the interior feels modern and contemporary. Its sporty bolstered seats, infotainment screen, shifter, and instrument panel came from the Lexus IS F.

As such, it felt peculiar to drive, especially as you're grabbing onto an Alcantara-upholstered steering wheel while looking out and seeing the old-school side mirrors mounted way forward on the fenders.

This unique approach distinguishes this Corolla. What Millen was able to do, and with such attention to detail, is impressive. 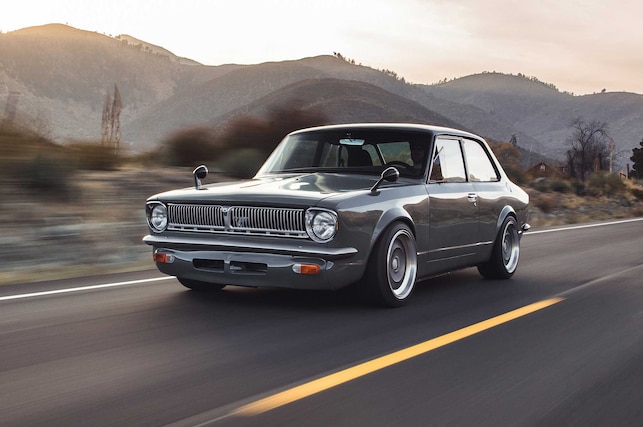 Besides getting tested by MotorTrend, the Corolla has already seen some action. The car was shown at Toyota's dealer meeting earlier this year, and before it makes its way to Central America, it will be driven from Southern California to Dallas, where it will be driven by Bob Carter, executive vice president of sales at Toyota North America. Asked whether the car will be on display at the enormous Toyota Campus in Plano, Quiros said he hadn't thought about it, but it might be a good place to reside while he waits for the export permits.

So, you might ask, what does it cost to have Ryan Millen transform an old Corolla into a modern-era, tire-melting, supercar-abusing, dragstrip demon? A cool quarter-million bucks. Quiros and Millen are not done yet. They're starting to work on a new project that involves a 1967 Corolla two-door, similar to this one. If this Corolla IS F serves as an example, you can bet the next one will be just as good or even better. Get out your checkbooks.