Why the DSM Community Is Going Crazy About This Mitsubishi Eclipse

Forget the 100 shot of nitrous and Fast & Furious body kit, this Evo-swapped Eclipse is the real superstar. When most folks think of the Mitsubishi Eclipse, their heads automatically envision Brian Earl Spilner's 1995 Eclipse GS. You know exactly what I'm talking about... Wings West-style body kit, Kawasaki Green paint, underglow neon, ridiculous 18-inch Axis wheels and a nitrous system so powerful the floor falls out. While most of us can laugh about it now, the car was an abomination to the DSM (Diamond-Star Motors) community, which is made up of extremely passionate Eclipse, Eagle Talon and Plymouth Laser owners. And while many of us know the beloved turbocharged 4G63 inline-four engine is under the hood of many Eclipse models, the F&F car featured the 420a—a naturally-aspirated 2.0-liter 16-valve four-cylinder that put out 140hp and would be hard pressed to take on a Chevy Cavalier. Quite frankly, the movie car tarnished the DSM scene, but thank heaven there are guys like Miguel Martinez that give us a legit 2G Eclipse that's truly worthy of the big screen.

Miguel is 25 years old, which makes him about six at the time of the original Fast & Furious coming out. He credits the movie franchise for helping him get into cars, however, he found the right path early when it came to the tuner scene and he modeled his 1999 Eclipse with nothing but true performance and clean styling in mind. I've stumbled across his project car multiple times on his Instagram and YouTube pages and can honestly say I'm a big fan. By day, he works at Bisimoto Engineering as their chief marketing officer. Once he clocks out, he's hanging and wrenching with his buddies until the wee hours of the night on projects like his Eclipse and Evo. 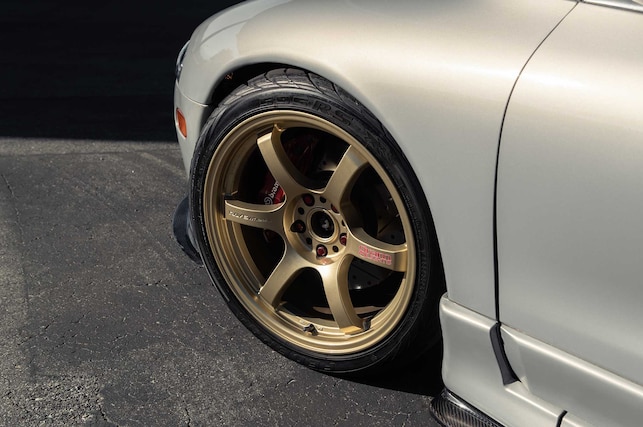 After seeing his Eclipse first-hand at our photoshoot, I'll be honest, it's not going to win any car shows with some wear and tear on the paint and body but all the right ingredients are there, from its carbon fiber lip kit, RAYS wheels and Bride seats, to the entire powertrain swap. What used to be the same sad front-wheel-drive NA 420a as the Fast & Furious car is now a turbo 4G63 machine with retrofitted AWD conversion. It's cars like these that remind everyone they should be giving major props to the DSM community, and also why we should maybe forget about that hundred shot of NOS blowing the welds on the intake.

1-ON-1 INTERVIEW WITH MIGUEL MARTINEZ

When did you fall in love with cars?

I got into cars at a very young age. Things like Need for Speed Underground, The Fast and Furious franchise and collecting Hot Wheels only made it worse. I couldn't wait until I could drive and modify my very own build.

So, how'd you break into a DSM? Seems pretty unusual for someone your age to get into it....

My dad had an Eclipse GSX back when I was in the 4th grade. He promised to pass it down to me as I got my license, but he ended up trading it for a family sedan. I made it a goal to have one as my first car. Fast forward to high school, I got this car senior year and loved it ever since. The sleek, timeless and beautiful design always caught my eye every time I saw them drive by.

Word on the street is that this isn't your only Eclipse?

As a DSM'er, you can never have just one! I've had five DSM builds over time but ended up with my first one in the end. I also have a Mitsubishi Evo IX and CBR 600rr motorcycle. 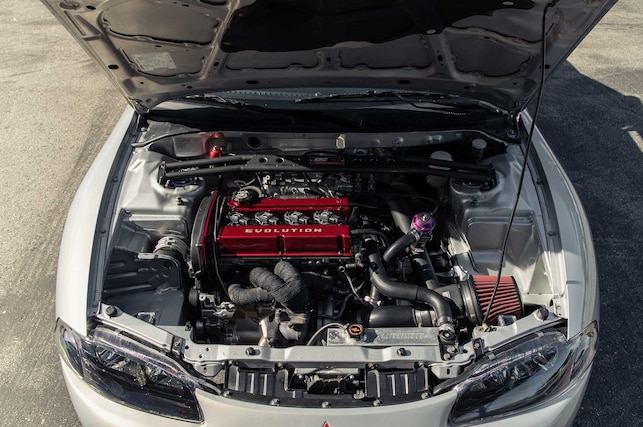 What was the overall game plan for the Eclipse?

To have something balanced between looks, handling and power. These cars don't need much to look good—a nice lip kit, coilovers and wheels will have people breaking necks as you pass them. I've always loved the car's handling with coilovers, sticky tires and upgraded sway bars. Then, I also added an Evo VIII motor to increase its performance.

Oh snap! Evo swap?! To my understanding, some Eclipses came with the turbocharged 4G63, but not yours?

Yes, some Eclipse models come with a turbocharged 4G63 and all-wheel-drive. My specific car was front-wheel-drive with a naturally aspirated 420A pushing 140hp‐truly an underdog in the DSM community. If you have one of these, you're constantly looked down upon and seen as having something pretty much worthless. I constantly pondered about selling it and getting a GSX, but I took it as a challenge to do something that hasn't really been done before and make my own.

How did it all go down?

I decided to document the whole build on my YouTube channel and started collecting Evo parts. I picked an Evo VIII motor because it was what was available at the time but any Evo VI to IX would've worked well. My friends Lazy, Chris and I initiated the swap in a garage, taking it one step at a time. We were able to finish it as the world's first true AWD Evo-swapped DSM. The build truly developed our character, skills and friendship over the two-year period. I'm forever grateful to them for that. 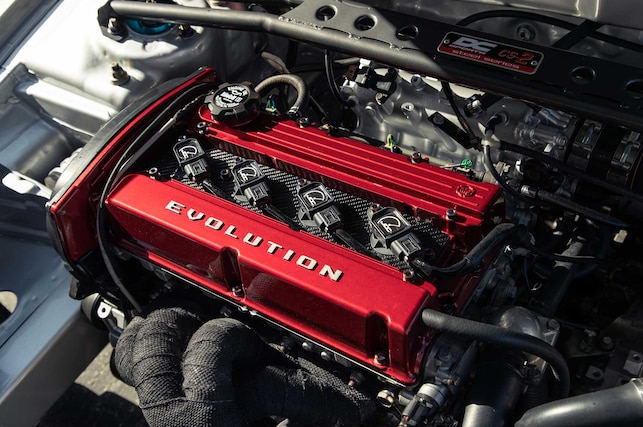 I was told various times that it was a waste of time and money, but I still look back and thank myself for going through with it no matter how hard or difficult it got at times. It really showed me that being consistent with something you want to achieve is possible. It payed off in the end, I have a blast driving it, and it really represents the DSM community as a whole—a bunch of friends working in their garage every weekend hoping it will run someday as it sits on jack stands for multiple seasons.

And for the rear-end and tranny, are they Evo or Eclipse components?

Besides the Evo all-wheel-drive components up front, the rear is a full AWD conversion off the Eclipse GSX. We had to get a custom driveshaft made to make both sides work together. As for the transmission, I chose the Evo IV, but Evo IV through IX transmissions all fit the same. The IV is just more cost effective. 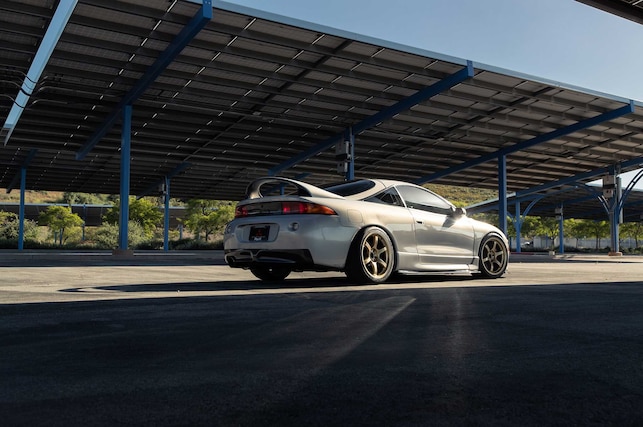 How long did the entire swap take and what were the most challenging parts?

The swap took around two years of working on it every weekend. No crazy tools or lifts, all built in a garage with Harbor Freight Tools, but it was challenging only because no one has really ever documented any "how-to's". Some fabrication, testing of various parts and a custom wiring harness from Ohm Racing made it all come together. It's not an easy task, but I've gained a lot of knowledge on the platform thanks to it.

Let's take a minute to go over the styling. No candy paint or crazy widebody, huh?

I really wanted an OEM+ look. Like I'd mentioned earlier, these cars don't need much to look good. The Carbonetics lip kit matched to some beautiful gold RAYS Gram Light wheels and coilovers really make this car look outstanding. As far as interior, the bright red Bride seats matched to the Takata harnesses really bring the car together. 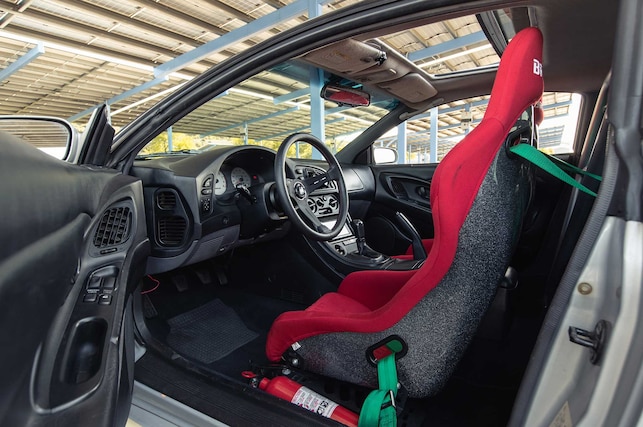 At the time of our shoot, you mentioned the car still needs to get tuned, but what else is on the agenda?

A build is never truly done. I always find something that needs to be replaced or upgraded. As far as right now, I plan on upgrading to some TE37 wheels paired to some Toyo R888 tires. We are going to have the car tuned on E85 and hoping to break the 400-horsepower mark on the stock Evo IX turbo; might upgrade that later to chase bigger numbers. The car is also still on original paint, so I plan on having it resprayed to bring it back to its glory days of the early-2000s.

I really do want to thank everyone that has come together to help in the build, especially Lazy and Carlos for being there the whole time. I want to thank the Bisimoto team, Purol lubricants, Sergio at Carbonetics, ohm racing, Raw Power Motorworks and Jon and JDC for coming in on the build. I also want to give a shout out to the DSM community, for keeping them alive. They're getting rarer and harder to come by as time goes by. 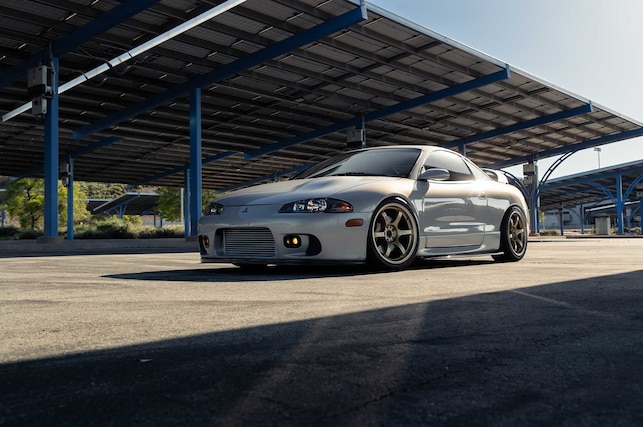