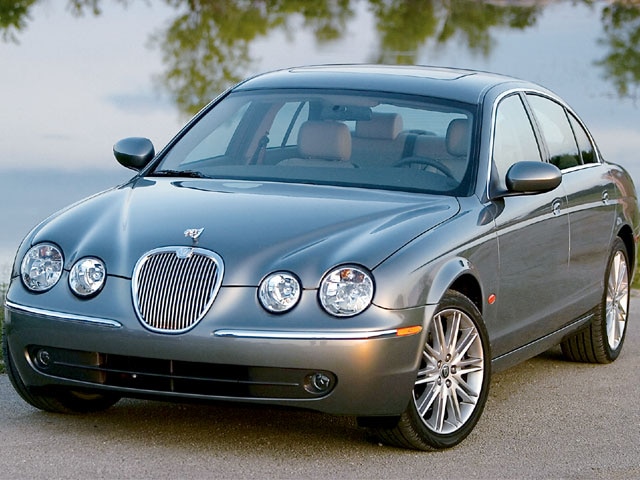 Austin, Texas-Jaguar has always built beautiful automobiles, so it should come as no surprise that the 2005 facelifts for its popular S-Type sedan and XK8 convertible and coupe don't screw up a good thing. In fact, unless you are a Jaguar aficionado, you might not even notice the subtle resculpting of the front and rear of both cars. Neither car is new: The XK8 was launched in 1997 and the S-Type in 1999, but both have aged gracefully and have benefited from significant upgrades, including a comprehensive makeover of the S-Type for the 2003 model year and a systematic improvement of the XK in 1999 and 2001. What is impressive is not how beautiful they are, but rather how fast they have become.

S-TypeWith the benefits of an interior and front and rear suspension revamp in 2003, Jaguar designers couldn't resist reshaping the front and rear of the S-Type sedan for 2005. As the smoother front required a new die for the hood, Jag took advantage of its extensive experience with aluminum from the XJ project and decided to make it out of aluminum. The aluminum hood not only saves 22.5 lb over the steel item, this weight reduction comes at the right place, improving the front-to-rear weight distribution by about a percentage point to 52.5% front and 47.5% rear for the V8 sedan. The smoother front face and redesigned rear trunk lid also brought the aerodynamic drag coefficient down slightly, from 0.32 on last year's car to 0.31 on the new model, along with slightly less lift.

Another 2005 upgrade is the availability of the S-Type. special VDP Edition with the 4.2-liter V8 Jaguar insists that this is a separate model and not just a package. It features premium leather upholstery with contrasting piping, deep-pile footwell rugs, heated seats, California burl walnut veneers for the trim and an electric rear sunblind. Prices for the VDP Edition have not been set, but in a surprising move the announced price for the supercharged 4.2-liter S-Type R is actually $4,125 cheaper than in 2004, a savings of nearly 7%.

XK8Jaguar's sports cars, the XK8 Coupe and XK8 Convertible, also received facelifts. The front bumper was revised with a lower air intake and new grille splitter. Deeper rear bumpers and side sills make the rear of the cars look more substantial, while there are new exhaust tips for the XK8 and quad tailpipe tips for the XKR. As before, the 4.2-liter V8 XK8 model is available in coupe and convertible form, as is the more potent supercharged 4.2-liter V8 XKR model. The XKR also comes with a new, larger rear spoiler and a new-style mesh grille that looks even more aggressive than that of last year's XKR.

A six-speed ZF automatic transmission is standard on all models. A range of performance options is available for the XKR, including leather Recaro seats, a sports steering wheel, 20-in. BBS wheels, Brembo cross-drilled brake rotors with red brake calipers and an adaptive Computer Active Technology Suspension (CATS). With the addition of these options, it is easy to bring the $82,995 base price of the 2005 XKR Coupe very close to the magic $100,000 figure.

Texas Hill CountryThere was a time when the true test of a grand touring car was its ability to travel safely from point A to point B over twisting secondary roads in a minimum amount of time and a minimum amount of drama. Jaguar was kind enough to provide point A and point B and the twisting traffic-free roads in between, and the XKR proved that it ranks among the world's best cars for this sort of driving. Although a large and heavy car, the XKR coupe shrinks around you and treads almost nimbly across the undulating terrain of the Texas Hill Country. The car is rock-steady, even when entering long sweeping corners at 80+ mph and remains totally unflappable, even when the road surface is broken or uneven. The supercharged 4.2-liter V8 has a nice whine in the upper speed ranges, reminding you that all 390 bhp are a mere push of the throttle pedal away. The shift quality of the ZF six-speed automatic transmission is excellent; shifts between gears are noted only by a change in engine exhaust pitch.

There are a few disappointments. Jaguar has introduced on the XK range a feature known as Automatic Speed Limiter (ASL). When the driver has programmed in a maximum speed, ASL will maintain that limit, even when the driver presses further on the accelerator. The system cancels if the driver applies full throttle to kickdown with the automatic transmission. ASL seems silly and pointless and not at all in keeping with the performance character of the car. Likewise, the adaptive cruise control fitted on our test car was obtrusive and annoying. Fortunately, like ASL, it could be switched off to enjoy the pleasure of driving with minimal electronic intervention.

As might be expected, driving these same roads with an S-Type R sedan was a half step less impressive than covering them in the XKR Coupe. The S-Type has an excellent chassis, combining well the roles of isolation and ride comfort with high-performance handling and showing little of its age. Only after experiencing the superb stability of the XKR Coupe can the S-Type R be judged as anything less than stellar. It is no doubt one of the prices paid by the addition of two more doors and a slightly higher center of gravity.

Jaguar's rich history of building powerful sports cars and sports sedans is well served by the 2005 S-Type and XK8 models. They are not inexpensive (even with the S-Type price reduction), but in the context of the world in which they compete, and if you can afford one, they do seem worth the price. In reality, their mission is fairly simple and was succinctly defined by James Thomas, Jaguar's communications director: "We make beautiful fast cars-that's all we do."