Home  |  Features  |  Maserati Biturbo - On The Line
Subscribe to the Free

Maserati Biturbo - On The Line

An Affordable Exotic From The 1980s 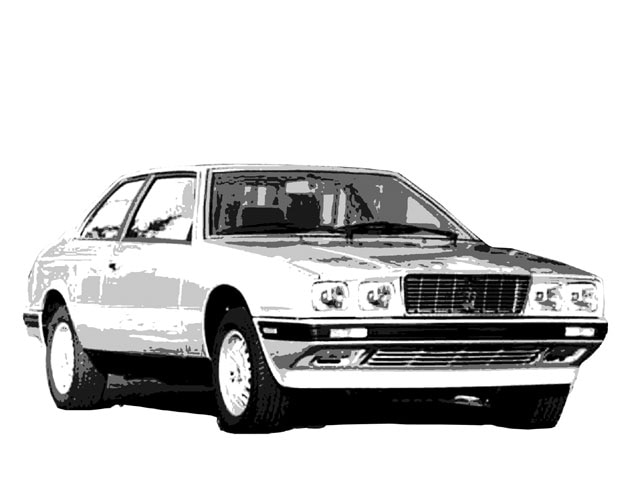 I like orphaned automobiles. Cars whose makers were forced to leave the United States, usually with their tails between their legs in financial ruin. While today it takes billions to be a player in the U.S. market, a long time ago it didn't take much more than a dream and a good toolbox to be an automaker. Build yourself a frame, find an engine and transmission, wrap some sheet metal around it and presto, you were a car manufacturer. In the '50s and early '60s, there were dozens of car companies who would sell you their idea of a car. That this idea of a viable vehicle was often offbeat and weird was a bonus. It had to have been a fun time to be a car enthusiast. Maybe it was too much fun, because it all changed in the late '60s when government crash tests, safety standards and exhaust emissions legislation were enacted to make cars safer and more socially responsible. Suddenly it took a whole pile of money to engineer cars to meet the letter of the law, and charismatic but flawed automobiles largely disappeared. The few that remained were bowed and beaten by the rules and were generally shadows of their home market versions.

Fighting the fightIt probably isn't an accident that some of the last cars to leave our shores came from Italy. Always the products of passion more than practicality, cars from makers like Alfa Romeo and Fiat fought a valiant fight, but were outnumbered by the bureaucrats. If these companies with their formidable resources were forced to throw in the towel, then what chance did tiny Maserati have? Yet in the 1980s, the company, headed by the always-energetic Alessandro De Tomaso, produced a production run of pricey performance coupes, sedans and spyder convertibles that are just beginning to become appreciated by orphan-loving car enthusiasts today. Called the Maserati Biturbo (pronounced bee-turbo), these charismatic and wholly Italian misfits bear further scrutiny.

How did this happen?In 1975, Citron sold Maserati to De Tomaso. Citron had built an enormously complex car, the Citron SM, with a Maserati engine and the car had nearly bankrupted both firms. At first, De Tomaso seemed happy to continue building sports cars. But in 1980, technicians at the company's research center in Modena began to examine several prototypes. The success of the 3 Series BMW in Europe and North America had inspired De Tomaso to create a similar sports coupe with a Maserati trident badge. Numerous concepts were considered and rejected before the Biturbo's design emerged. After considering several inline six-cylinder engine ideas, the Biturbo ended up with a 90-degree V6 engine that was a heavily modified version of the one found in the Maserati Merak sports car. Turbocharging was en vogue in the early 1980s, so De Tomaso's engineers decided that they needed two of them, which also gave the car its name. Despite similarities to several cars by Giugiaro, the styling of the Biturbo was done in house. When it was new, some unkindly compared the car's conservative lines to a Toyota Camry on steroids, but the shape has aged well. The Biturbo was introduced to the press in Europe on December 14, 1981, which also happened to be the 67th anniversary of the founding of Maserati.

The BiturboWhen it was first introduced in Europe in 1982, the Biturbo had a 2.0-liter engine. For the U.S. market launch in 1984, this was enlarged to 2.5 liters to develop 185 hp at 5500 rpm. Although this seems humdrum today, the Biturbo was a truly powerful car by the standards of the early 1980s. The engine had an aluminum block with cast iron wet liners. It was a dramatically oversquare engine; its bore of 91.6mm was significantly greater than its 63mm stroke. The single overhead camshaft operated three valves per cylinder: two intake and one exhaust. The intake valves were unusual in that they were of different sizes. Two IHI turbochargers sat underneath the cylinder banks and pressurized a single two-barrel Weber carburetor located atop the engine. A carbureted, turbocharged engine was a bit archaic, even in the early '80s; fuel injection would come in 1987. The engine produced 208 lb-ft of torque at 3000 rpm and the Biturbo could run from zero to 60 mph in around 7 seconds, putting it in Ferrari 308 Quattrovalve and Porsche 944 territory. The rest of the car was state of the art for the day, including front and rear independent suspensions, rack and pinion steering, a five-speed ZF manual transmission and four-wheel disc brakes. With production ramping up to a theoretical 30 cars per day in the Innocenti factory in Milan, De Tomaso optimistically hoped to sell 1,400 cars per year in North America. There is no record that he ever did.

What's whatThe Biturbo came with three basic body styles: a coupe, a sedan and a two-seat convertible. The two-door coupe arrived first in 1984 and was offered in a special Biturbo E model in 1985. This version had dual air-to-air intercoolers (air-to-liquid for West Coast cars), that bumped up power to 205 hp at 5250 rpm and torque to 260 lb-ft at 3500 rpm. Acceleration times dropped to 6.3 seconds for zero to 60 mph. The Biturbo E also had two-tone paint, shorter stiffer springs, larger tires and a stiffer front anti-roll bar. In 1986, the four-door Biturbo 425 and two-seat Biturbo spyder convertible arrived, while the two-door coupe was dropped for one year. The original oil-cooled IHI turbochargers were replaced with more reliable IHI watercooled units and all cars were equipped with automatic transmissions and power steering. In 1987 the coupe came back, and in all models fuel injection replaced the Weber carburetors and the five-speed manual transmission returned. There were no Maserati cars shipped to America in 1988, but in 1989 significantly revised versions of the cars returned, this time without the Biturbo name. The engine now displaced 2.8 liters and made 225 hp. The spyder model continued, but the redesigned and stretched two-door was now called the 228 and the four-door the 430. Some cars were sold in 1990, and a few Spyders were sold in 1991, before Maserati left the North American market to concentrate on markets in other parts of the world.

Why would you want one?Three words: cheap, fast, Italian. Although the Biturbo cost as much as $37,000 when new, today early cars can be found in the $2,000-$4,000 range. Later cars bring a bit more, the convertible spyder can exceed $10,000 for a nice one. Although the neglected Biturbo can be found cheaply, it is up to the buyer to beware. If you see lots of smoke on your test drive, for example, you are probably looking at new turbochargers, which can cost $1,800. If the engine needs a full rebuild, it can easily run more than $7,000. As Italian cars, the traditional electrical problems, oil leaks and rust and corrosion are also potentially present in any Biturbo. On the other side of this gloom and doom, the cars are distinctive (maybe more now than when they were new), comfortable and fast and make a satisfying growl when accelerating hard. Long ignored, even by Italian car lovers, prices of Biturbos have started climbing in the past couple of years as enthusiasts discover that they can buy a piece of Maserati's distinguished history for less than the price of a used Honda Civic. Buy one and you'll not only learn why the Maserati trident is held in such reverence by those in the know, but you will also have an entre into a community of Italian car aficionados. More importantly, you'll gain the respect and admiration of orphan-car lovers everywhere.

Maserati Biturbo - On The Line
Photo /