Renault Alliance and Encore - On the Line

Why do anything else? 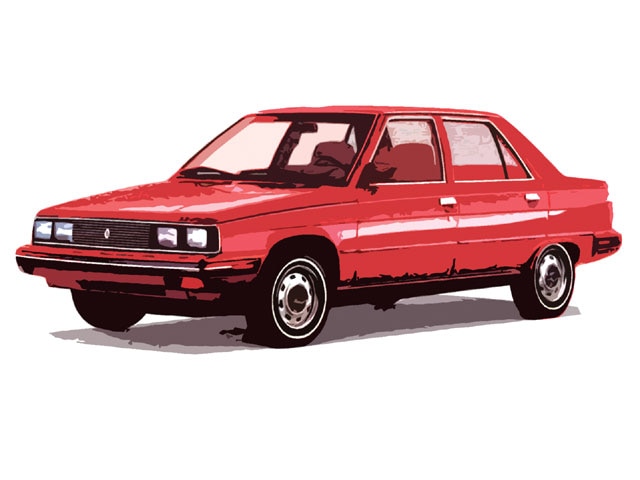 Gas prices have gone nuts, and suddenly it isn't just SUV drivers who are checking their credit limits before gassing up at the pumps. Consider at $3 a gallon for fuel, if you are driving a car that get 21 miles per gallon, you are only going seven miles for every dollar you put into the tank. Don't like those numbers? You could buy a hybrid, if you don't mind driving it for more than 16 years, the time it will take the typical hybrid's 7-8 mile per gallon improved gas mileage to pay for its $6,000 price premium. There is another solution: Find an older car from a simpler (slower) time that will deliver hybrid-like fuel economy at used-car prices. There are a variety of cars to choose from. One award-winning example is the Renault Alliance and sibling Renault Encore from the mid-1980s.

Distinguished lineageRenault began building cars in 1898. The company was always well known for its reliable, if somewhat stolid automobiles. The French company entered the U.S. market in the 1950s, selling such rear-engine oddities as the Renault Dauphine sedan and Caravelle sports car. By the 1970s, Renault's major U.S. product offering was the cheeky Renault R5 Le Car. This front-wheel drive 1.4-liter four-cylinder sedan met the demand for high fuel economy. It was reasonably sporty and fun to drive, and Renault even created the "Renault Cup" racing series for the odd looking and somewhat tippy "Leakers." But Renault had designs on a bigger piece of the American pie and in 1982 Renault purchased American Motors, primarily to tap into its distribution system and AMC's Kenosha, Wis., manufacturing plant, on which Renault promptly spent $150 million to refurbish.

An AllianceThe money Renault spent in Wisconsin was to install an assembly line for its Renault 9 model. The four-door boxy Renault 9 had just been introduced in Europe where journalists had called it their car of the year, and it had become the best-selling car in Renault's history. Some changes were made for the U.S. market, the primary one being a change in its name. The Renault 9 became the Alliance, a reference to the joint Franco-American efforts on the car. The Alliance was well received, named as the 1982 Motor Trend Car of the Year and voted as one of Car and Driver magazine's Ten Best in 1983.

A big small carThe Renault Alliance was a nice package. It was slightly shorter than Ford's Escort on the outside, but had a three-inch longer wheelbase. Three abreast seating was possible in the rear seat, something that the Honda Civic, Ford Escort, Mazda GLC and VW Rabbit couldn't offer. The Alliance was also light, coming in just under 2,000 pounds in base trim. The transverse engine in the base car was the 1.4-liter four-cylinder from the Le Car (where it had mounted longitudinally) with the addition of throttle-body fuel injection (port injection for California cars). Zero to 60 mph took a leisurely 14.3 seconds, but the small engine delivered an outstanding 37 mpg city and 52 mpg highway in the EPA's fuel economy tests. Front MacPherson struts, rack-and-pinion steering and a trailing arm with torsion bar rear suspension made the thing handle pretty well, especially for those used to the roly-poly antics of most French cars. All this was available for around $5,500 for the base two-door and about $7,500 for the all-out four-door Limited.

The EncoreIn 1984, the Encore hatchback was added, based upon the similar Renault 11 model from France. The Encore three-door became the basis for a rejuvenated Renault Cup racing series. A convertible was also added in 1984, notable for its power-driven top mechanism and low-cost open-air motoring. A 1.7-liter engine was made optional in 1985, and a both cars could be had with either a three-speed automatic transmission or a five-speed manual. The Encore was renamed Alliance Hatchback in 1987.

Best for LastIn 1987, Renault came very close to bringing its exotic V6-powered rear-engined Alpine A310 GTA sports car to the U.S. market. Instead, the French company decided a VW GTI-like small car would be more successful. The Renault GTA was based on the two-door Alliance sedan and was fitted with a 95-bhp 2.0-liter engine. The car was lowered and had significantly stiffer springs, shocks and anti-roll bars as well as a tacked-on body kit. Tires were 195/50VR15 Michelins on special GTA alloy wheels. The car was fun and nimble, if not particularly powerful. A convertible version of the GTA also was available. Unfortunately, the bigger engine dropped fuel economy to 26 mpg city and 30 mpg highway, by EPA estimates. The end was near by this point, as Renault sold AMC to Chrysler in 1987 and pulled the plug on its U.S. operations in 1988.

Which one to buyThe first thing you need to decide is whether you are going for ultimate fuel economy (take the 1.4-liter), a bit of performance (the 2.0-liter), or something in between (the 1.7-liter). In reality, none of these cars is very fast (figure around 10 seconds for zero-to-60 mph for a good running GTA). Two-doors, four-doors, hatchbacks and convertibles are all available in plentiful supply as Renault built more than 600,000 Alliance/Encore/GTA models in its Kenosha plant between 1983 and 1987. As with most cars made in the 1980s, rust is the big enemy and finding a rust-free body will be the biggest challenge. The cars are all fairly robust with no major engine or driveline problems, aside from a scarcity of parts. In fact, parts are becoming quite a problem and figure you'll spend a lot of time looking for bits and pieces online. Unfortunately, there aren't too many websites for Renaults in this country and even the Renault Club in the States (www.renaultownersclub.org) has few links to offer. Prices range from free-if-you-take-it-away, to just a couple hundred dollars, to maybe $2,500-$3,000 to the nicest GTA convertible remaining on the planet

Why do you want one?Maybe you don't. The Renault Le Car was at least quirky in its looks and Gaelic enough in its charms to give it some charisma. The Alliance and Encore tried really hard to become mainstream American cars, and their success at achieving that goal is their undoing today. They just don't seem weird enough to be French cars, yet they suffer in parts and servicing from their orphaned status. On the other hand, they are throwaway cheap, exceptionally economical (at least with the mouse motor), and different enough in a world filled with SUVs and pickup trucks. On the downside, they won't do much to protect you in an accident, but they do represent the last hurrah for Renault in the U.S. Glamorous they are not, but maybe a few of us ought to save a couple of them so we will remember the last time the French built an American car.

Renault Alliance and Encore - On the Line
Photo /