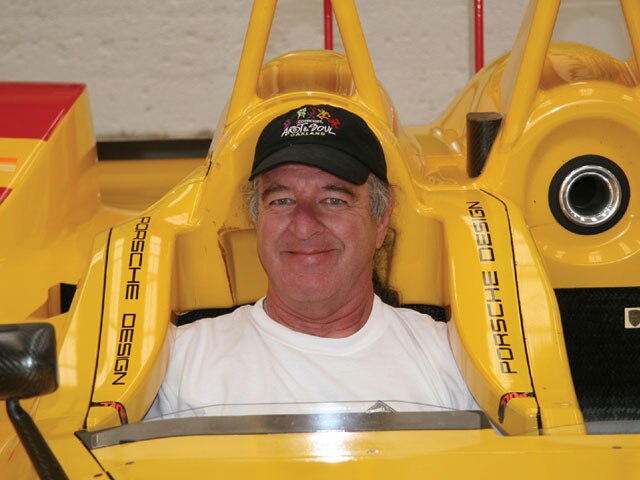 The third Porsche Rennsport gathering took place once again at the Daytona Speedway. Special emphasis was given to the 956 and 962 (which was celebrating its 25th anniversary), and also to the 917 and its variations. Actual factory participation in the sense of werks entries was sparse and the personnel responsible for the existence of these cars (such as Norbert Singer) were missing in action. But there was no shortage of pedaling talent wandering about and ready to sign photos and programs. Just seeing Gerard Larrousse and Vic Elford together again was worth the trip alone.

Porsche kunden (customers) made up the field with a large selection of machinery, from Matt Drendel's Sebring-winning 935 to the last air-cooled 911 that won Daytona and Sebring in 1999-belonging to Chris O'Donnell. All restored to concours condition.

Porsche did ship over several 917 rarities from its museum, such as one of the Martini Langhecks that ran at Le Mans in 1971 and the famous 917/20, otherwise known as the 'Pink Pig.' As Rennsport III was mainly for recollection and story telling, I will toss in a few.

The 917/20 was neither a failure nor a success, the result of an outside contract given to the French firm SERA. After the Le Mans trials, the Porsche design honcho hit upon the idea of the butcher paint scheme. The main entrant sponsor, Martini & Rossi, was so horrified when they saw the final visuals, they requested that their stickers not be displayed. 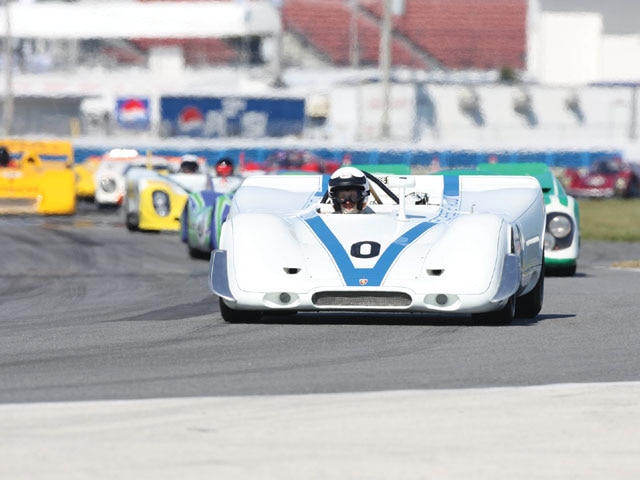 The race was anticlimactic for the Pig; an early retiree after Reinhold Joest had an off-road excursion. The saga takes a turn after Le Mans. Ferry Porsche called Lapine onto the carpet about the colors. The dressing down was along the lines of: Italian cars are red, British cars are green, French cars are blue and German cars are NOT PINK! By now, however, images of the Pig had been reproduced around the world and the 917/20 became one of the most recognizable Porsche racecars of all time. This notoriety no doubt saved the Pig from the slaughter haus, where it would have surely been cut up, as was the practice of many racecars of that time.

The Pig and the Longtail are well known to most Porsche enthusiasts. Rarely seen outside the factory is the 16-cylinder 917 Spyder. Housed in the familiar bodywork of the 917PA, the stark white chassis 917-027 was Ferdinand Piech's experiment for a possible Can-Am contender before going the route of turbocharging the flat-12 917 powerplant.

No data has ever been released to show if the 16-banger would have been competitive. However, it certainly is impressive to look at and fills up the rear bay of the chassis. One of the 917s in particular was of special interest to me.

The original 917 PA (chassis 917-028) is the property of the Collier Museum (located in Naples, Florida) and is without doubt the most raced of any 917 that ever campaigned in the US. It started life as a naturally aspirated version for a few seasons before Vasek Polak turned it in to a much-modified turbo variant. The PA was later sold to Randolph Townsend of Team Reno who crashed the car and replaced it with a 917/10.

It then ended up in the hands of John Bond Jr. (son of the original Road & Track publishers, John and Elaine Bond), who stripped the chassis with the idea of turning a 908 into a home-built special, la the factory 936. None of this ever came to fruition, despite the best intentions. I kept after Bond to sell me the PA until, finally hoping to make me go away, he relented.

I showed up in a van with an open trailer. The chassis was damaged and broken in several places, but was basically all there. The loose parts went into the van and I secured the tail section with the huge rear wing to the chassis. It made quite a sight driving down the freeway.

After a couple of years gathering up parts here and there, I knew getting it all done was going to be an expensive proposition, so when an offer came from Miles Collier, I accepted and the PA went off to Florida, where it went through an exhaustive and sympathetic restoration. That was over 25 years ago. I had seen the PA race in the original Can-Am, but never in the form in which it was delivered. Rennsport III finally offered that opportunity as the PA took to the track for a few exhibition laps. Someone asked me if I had any regrets about selling the PA. I said no, as I didn't have the resources to do such a job-it was more than satisfying to see the car on the track. However, I did wish I had the chance to put pedal to PA metal at least once. I suppose I should have included that in the agreement with Collier.

As I didn't have a Porsche entered for Rennsport III, I did a lot of visiting and catching up with people you only see every three years or so. Luck came in the form of a chance to drive a 911R that had won its class in the Rennsport concours. Owner Peter Kitchak had several cars entered-including his 1973 Targa Florio-winning 911 RSR prototype-and the 911R was short a driver. The right place at the right time.

Well, maybe. I did a couple of laps and ran out of gas.