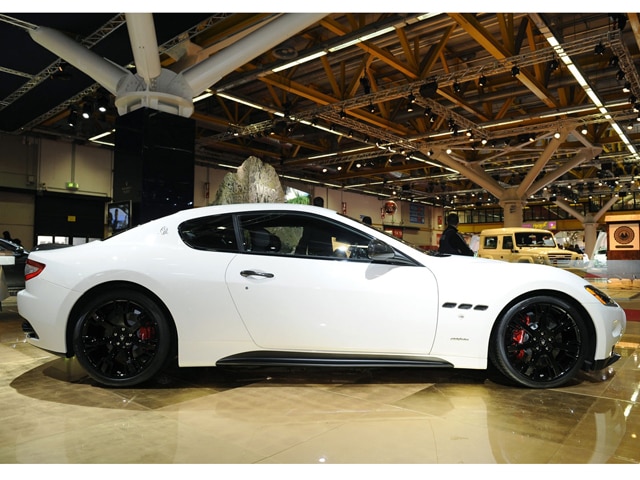 The MC Sport Line customization program focuses on Maserati's racing heritage fresh from its latest international triumph in the FIA GT championship with the Bertolini-Bartels duo in Argentina, the land of Juan Manuel Fangio.

Maserati has developed a special series of new options named "MC Sport Line", which make their worldwide debut at the Bologna Motor Show, with new content that adds to Maserati's already extensive range of personalization options. The "MC Sport Line" is designed to enhance the sporty DNA of Maseratis for those customers who like to express their passion for racing through dynamic styling and a choice of technical solutions that increase driving fun without compromise.

The name "MC Sport Line" sums up the on-track experience gained by the Maserati Corse department, whose contribution to the design of the functional components has been invaluable. The world of motor racing also inspired Maserati's designers when it came to styling, hence the extensive use of carbon fiber, exceptionally popular among racing enthusiasts thanks to its direct links to racing.

The GranTurismo S, the ultimate expression of Maserati's performance, was the model chosen to first present the "MC Sport Line" catalogue to the public, which will be extended to the GranTurismo range and then will ultimately encompass the entire Maserati line-up during the course of 2009.

From early 2009, GranTurismo S customers will not only be able to enhance the sporty look of their vehicle's exterior and interior -- but different technical solutions will also be available.

Aerodynamics can be modified thanks to the addition of front and rear carbon-fiber spoilers, which benefit from track tests conducted on the GranTurismo MC Concept; the new aerodynamics not only optimize the vertical load but give the car a very distinctive appearance, as do the side skirts with the central panel finished in matt black, adding a dynamic edge to the side view.

The sporty look of the exterior can be completed with carbon fiber mirror housings and door handles. The same dark shade is reflected in the glossy black 20" wheel rims that perfectly match the dark line of the exterior.

The carbon fiber door sill bearing the words "MC Sport Line", tells you that you are entering a different environment, in which carbon fiber characterizes the door panels, dashboard and central tunnel.

The steering wheel rim is also made from carbon fiber, as are the paddle shifts for the electro-actuated transmission and the body of the instrument panel, dashboard and door panels, featuring carbon molding. Looking at the central tunnel, carbon fiber dominates the entire section, acting as a backdrop to enhance the brilliance of the chrome.

The "MC" pedal block complete with kick plate to the left is machined from solid aluminum.

Under the "skin", the suspension has been stiffened thanks to new, stiffer springs, shock absorbers and anti-roll bars; the new suspension set-up is synchronized with specific Maserati Stability Programmed software, allowing the driver more freedom. The car is now 10 mm lower than the GranTurismo S, resulting in on-road performance that is absolutely uncompromising in terms of handling and driving enjoyment.

All the features listed are available either as part of the customization package, following the indications of Maserati designers; or individually, to cater for the personal tastes of each customer.