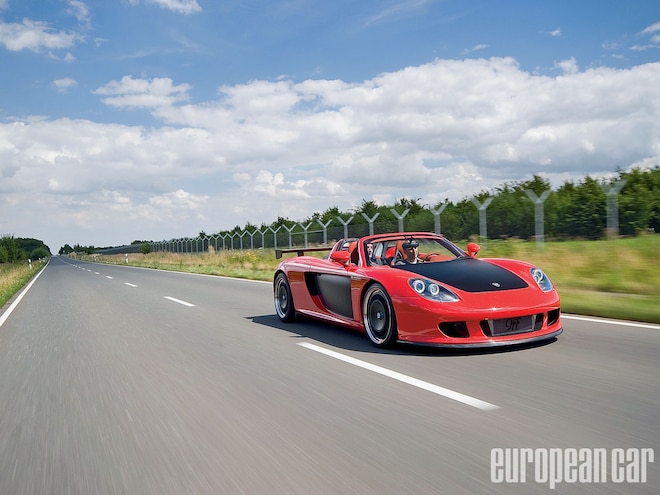 The oil barons and Middle East nobility have different problems than you and me, and different ways of solving them. When one kept getting blown off the drag strip by a Bugatti, he didn't just concede defeat. He took his Porsche Carrera GT to the good folks at 9ff and asked them to make it faster, much faster. 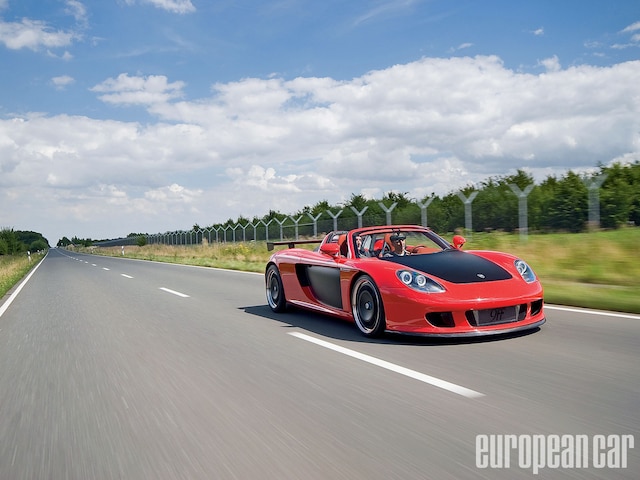 The end result waited for me at 9ff's Dortmund HQ, a twin-turbo Carrera GT-T900 with 900 hp and enough straight-line pace to blow the Veyron clean off the road. Once Jan Fatthauer gets involved, power is rarely an issue.

Fatthauer launched 9ff in 2001 with a clear and omnipresent vision: to make the fastest Porsche-based toad rockets in the world. The GT-T900 is the result of a year's hard work, serious monetary investment and more than a few sleepless nights.

Porsche's showpiece was more than a virtual racing car anyway. It was really destined for the track until budgets were reshuffled and Porsche's engineers were left with a thoroughbred racer without a cause. So the car was re-engineered and given license plates and hardcore drivers from around the world were invited to put down their money for a carbon-fiber chassis and a highly-strung 5.7-liter V10 with 612 hp.

It was more than enough car for most and developed a scary reputation for on-the-limit histrionics that frequently ended in hedges. The one thing it really didn't need was more power, but then need and want are entirely separate things and if a customer comes with the money, Fatthauer is happy to throw the arsenal at the car.

Achieving the power was relatively easy, as the power/cylinder ratio is way less than Fatthauer is used to. He has achieved 1,100 hp in the GT9R using just six cylinders, but the art here was to get less power with lighter weight components, as the usual pistons would be too heavy to rev fast enough.

Of course it isn't an easy job messing with this much power. As well as the twin turbos, Fatthauer also had to fit an ambitious cooling system that involves more than 18 meters of tubing that created its own problem-he could drill holes in the tub for fixing points. So the whole cooling system is an intricate set of right angles designed to wedge against and around the whole structure of the car. And that is mind-bogglingly difficult to achieve without sacrificing the pressure for the water-to-air intercooler.

A new exhaust is inevitable as well as a rebalanced crank to cope with the epic forces, and revised aerodynamics that include that big wing on the back, but the usual ingredient of titanium conrods just wasn't required-the stock car came with them. 9ff's center-lock wheels are there more for cosmetic effect, but the engineering within was all 100 percent essential. Quite how far 9ff has taken the car is shown by the smoke pouring from the open crankcase of the gearbox as the car sits idling, which is a normal side effect but a disconcerting one nonetheless.

Every component was shaved down to the nth degree, which worked fine on paper, but nobody knew how it would all hold together when the car hit the dyno for the first time.

He was messing with the unknown, too. While the figures all stacked up, there was no way of knowing what would happen in the real world when the engine suddenly gained 50 percent more power. "The first time we put everything together and fired it up was on the dyno," Fatthauer explains. "I didn't sleep the night before."

Nor did I today. The thought of driving a car with way more power than the factory intended was enough for a fitful night's sleep and I arrive to take the helm of €500,000 ($736,000) of metal and carbon fiber with no small amount of trepidation. Especially as it was due to be shipped out to the customer in Abu Dhabi the day after our drive, and people like that might not take too kindly to me crashing their Veyron slayer.

And this wasn't the easiest car to drive, either. Thankfully, 9ff has replaced the ceramic clutch that is notoriously fragile with a racing clutch that makes it easier to get off the line, but it doesn't like low revs and grumbles, vibrates and jerks at low speed. "This car either likes to go or stop-there is no in-between," Fatthauer says. That's fine when you're drag racing in the Middle East, not so fine when you're trundling along behind a VW Bus at 30 mph for tracking photography.

Still, given its head, this car is incredible, a different league to the Carrera GT that stole all the plaudits just a few years ago. 9ff has slashed half a second off its zero-to-60 time, now 3.2 seconds, and it will keep going through 125 mph in just 8.5 and 185 mph in 17. Independent tests show the Veyron hits 185 mph in 18.5, and the 9ff slaughters other rear-drive cars like the Enzo Ferrari, Mercedes SLR McLaren and Lamborghini Murciélago LP640, with a top speed in excess of 230 mph. Theoretically, then, the Veyron will pass it in the end, but that would take several kilometers of flat-out running and a serious set of balls.

It's sheer violence to drive and feels like being tied to the end of snapped elastic. The traction control can't hope to contain the power and it would take real skill to keep this car on the road around bends. Fatthauer has fitted stiffer springs that work in harmony with the car's existing systems, and help it stick like a limpet if you don't push too hard, but the throttle is always a twitch away from burning traction and only a truly great driver could get the most from it on a mountain pass.

But that's not what it was intended for. It's a car with a specific purpose in mind, and one the customer was happy to pay the equivalent of $220,000 just for the conversion. "I'm hoping for at least a few more customers," Fatthauer explains. "Others have tried to this and we are the only ones to succeed."

It almost makes economic sense for Carrera GT owners, since once the Porsche is out of warranty a blown engine could cost as much as $147,000 to replace. 9ff's work comes with a two-year warranty and Fatthauer has pledged to send engineers out to Abu Dhabi and, if the worst happens and the engine blows, build the individual components himself.

Now that's service, and looked at through particularly rose-tinted spectacles, the 300-hp power boost and a near insanely powerful Carrera GT could actually work out a bargain, if you look at it that way. But that's a world away from the recession-hit everyman, for people that have very different problems than you and me.