If At First You Crash, Try, Try Again 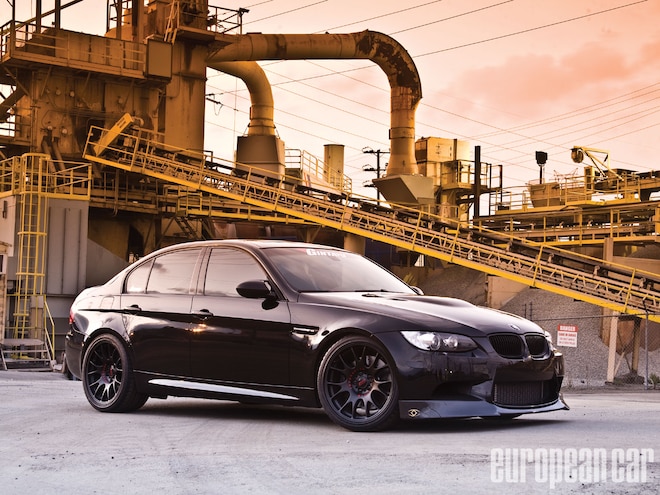 Los Angeles Forest, Calif.-Brian Sosa's M3 teetered precariously, upside down, on the edge of the cliff. Seconds before, the tail end had gotten a little too far out during a spirited drive up a twisty section of mountain road outside the city. While he'd normally correct these slides, his tires at the time were balder than Telly Savalas at a Mach III convention. Causing the heavily modified M3 to slide from one side of the road to the other and then flip up over the guardrail.

Sosa has been modifying cars to go faster since he was barely out of Underoos. He got his first VW Bug at the tender age of 13. While he patiently waited for his driver's license he rebuilt the engine, re-upholstered the interior, and did a primer paint job.

"After this I was hooked," he says. "I modded pretty much every car I owned after that."

Sosa admits that he delved into the Japanese market for a while, but as he got older and owned a few watercooled VWs, one of them a murdered-out 20th anniversary GTI, he decided Euros were the way to go. Like any true gearhead, he eventually realized that getting traction with big power in a FWD was like Junior Seau trying to sprint in an ice rink while wearing bowling shoes. Then again, had he stuck with front-wheel drive and not started a new chapter in his life, involving RWD and a modded E46, his life may not have been hanging by a thread that night in the mountains.

Lucky for him, his days on Earth weren't up. You wouldn't be reading about him if they had been. While the car was smashed to oblivion, his five-point harness and race seat had saved his hide. And he managed to climb out before the smoldering vehicle plummeted down the sheer cliff face and exploded. OK-that last part was hyperbole. Sosa describes it better: "The driver side was off the cliff, so I climbed out of the passenger side. I thankfully walked away without a scratch, but the car was totaled."

They say every dark cloud has a silver lining. In this case, the lining would be Sosa's E46 replacement, this supercharged E90 M3, complete with a six-point roll bar where the kid's seats are supposed to be. But at 23 years old, this BMW tech doesn't have those pesky things running around quite yet. Which is why he's able to blast his way around L.A. in what can truly be called a caged animal.

You may be wondering: Why a four-door? "I didn't want to buy a used E46 and the new M3 coupe just didn't appeal to me. It didn't have that aggressive race look I like," Sosa says. The slightly wider and longer four-door did appeal to him, though.

"I was talking to a buddy one day and we were saying how hardcore it would be to have a four-door sedan gutted out with race seats and roll cage," he says. "So I finally pulled the trigger on the E90. Before even taking it home I installed BMW Blackline taillights and the modding has not stopped since."

Speaking of stopping, Goodridge brake lines with Hawk pads and Motul brake fluid assist the E90 in coming to a halt. The entire chassis is lowered by H&R springs. Pneumatic duties are carried out by Continental ContiSportContact 3s that wrap custom-painted BBS CHs measuring 8.5x19 fore and 10x19 aft.

With the basics down, Sosa decided to put the car on a diet. He pulled the rear seats and the sound deadening material to shave some pounds. Then it came time to get to the heart of this caged animal's core, the engine. Gintani has been in the Bimmer game for some time now. The company's supercharger kits run up to 9.5 psi depending on the application. We first ran into them last November as their motley crew lingered around one of three of the supercharged BMWs parked at the weeklong SEMA convention in Las Vegas.

It was Gintani's reputation for performance that doesn't compromise drivability or dependability that led Sosa to call on this company for engine mods. Alex and Arbo Gintani are understandably tight-lipped about the exact specifications of the blower setup. But we do know that it consists of larger injectors, 12:1 compression ratio, and a custom machined intake manifold with a built-in cooling core. These items and others combined with a Vortech V2 charger run at 6.5 psi to help the S65 V8 churn out a claimed 630 crank horsepower.

Sosa's last incident occurred the night after he got the supercharger. After getting sideways while hard on the throttle, he flicked down to second but the additional power kept him sideways even through third gear.

He didn't crash-the only thing the policeman in the alley saw was a black four-door with a roll cage and a carbon 3F front splitter getting sideways at 45 mph.

This particular incident wouldn't end up ruining Sosa's night-or his M3. After pulling him over, the police officer called him out on the exhaust, which is a 2.5-inch catless race system from Gintani.

"I didn't mean to get it sideways," Sosa says. "I just wasn't entirely aware of how much faster the car was, and I didn't want to look like an ass in front of my girl, so I just rode it out." The officer let him go with a warning.

There's a moral to this story somewhere. I think it has to do with commitment. Sosa has it for his drifts, his girlfriend, and his project car. If he's going to stay this committed, he may want to extend that roll cage by a couple of points the next time he decides to go to the mountains. 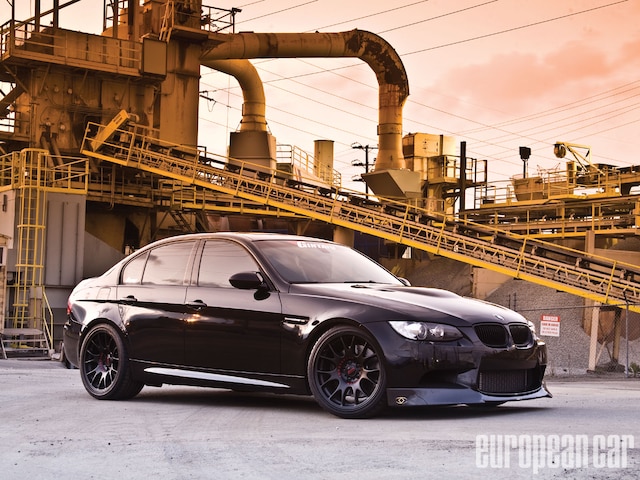