VFE and Vorsteiner build one wide M3--watch your elbows 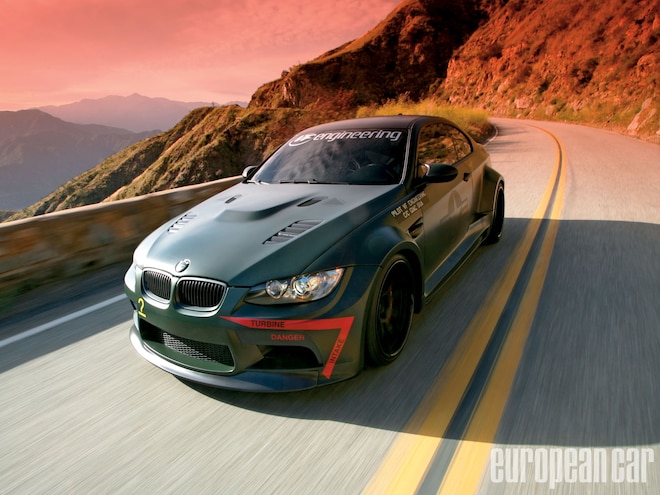 The only possible way this M3 could be more extroverted is if it was painted something like Speed Yellow or Verde Ithaca. According to VF Engineering founder Nik Saran-one half of the two-pronged attack launched at making this one of the world's most extreme E92s (the other being carbon-panel specialist Vorsteiner)-he has always wanted to do a military-themed car. "A lot of our customers are military personnel," Saran says. "And it's just a very eye-grabbing theme."

This M3, a 2008 model, began service in the VF Engineering shop as test mule for the company's tuning programs for the V8-equipped E90-series cars. Currently installed in the engine bay is VFE's VF620-trim supercharger kit, so named because it pushes a power peak of 620 hp at 6 psi of boost.

"People always want to know how much power these kits make," says Saran, who is also VF Engineering's head of R&D. "So we put the number right there in the name."

VFE's forced induction testing strategy is to push the engine to its absolute limit, then dial boost back for the final production kit. "Because it's a new platform, we don't want to push aggressive levels," Saran says. "We look to see what the car puts out, then turn it back a bit for reliability."

The system is based around a Vortech V3Si charger unit. This interfaces with a VFE "Charge Cooler" intake manifold, which is CNC-sculpted from solid 6061 aluminum billet. The manifold is actually a two-piece affair with a lower tray and upper lid. The tray has 2.25-inch runner tubes with radius velocity stacks machined right in. There's also an integrated heat exchanger, a high-density bar-and-plate design with a self-contained water circulation system incorporating a one-gallon plastic reservoir, secondary OEM radiator, and a Bosch water pump. The manifold is fully machined inside to provide cooled air charge evenly distributed to all eight intake runners, and it's flanged to allow it to be used with either BOV or recirculating valves, or optional BOV for extra sound effect.

"The key element to efficiency is to implement a superior ratio for radiator size to its capacity for heat introduction," Saran says. "The key is cooling water quicker than heating it, thereby avoiding heat soak."

The initial intake charge is fed into the system through a VFE-designed intake tract with a plastic molded inlet duct and K&N filter. Excess off-throttle "overrun" pressure is purged through a Tial bypass valve. The fuel supply is provided by Bosch high capacity cone-matched injectors (which closely mimic the factory injector spray pattern, critical to fine-tuning fuel delivery).

The final power upgrade takes the form of a Vorsteiner VTS titanium exhaust, which replaces the overly subtle stock exhaust note with a much more convincing and extroverted one. You could conceivably spend an afternoon as a canyon bystander watching and listening to this thing make its passes. Pack a lunch if you like. The exhaust also saves nearly 40 pounds over its OEM counterpart, and Vorsteiner claims by itself it makes an extra 14 hp and 13 lb-ft-gravy on top of the VFE blower setup.

As the second prong in the attack, Vorsteiner also supplied the new widebody powersuit, marketed under the GTRS3. This aero kit represents one of just 100 planned to be produced worldwide. Beginning up front, you have the GTRS3 front bumper cover and carbon splitter. Because this piece is designed to be low, low, low to the ground and could kiss pavement under even the most careful operation, the splitter itself is removable and may be replaced as a separate unit.

The bumper's aggressive lines flow laterally into widened carbon quarter panels that replace the metal factory panels entirely. These panels are notable for not just their extreme fender flares, but also for the large vertical vents designed to allow better airflow over the front brakes.

The package's aggressive lines continue rearward by way of GTRS3 side skirts and eventually interface with the silly-width rear flares. These are carbon as well, but rather than representing complete panel replacements as up front, the rear flares are bonded to the factory sheetmetal.

The kit is capped at the far end with a GTRS3 rear bumper section featuring vents behind the rear wheel wells and an integrated carbon diffuser. Items additionally available from Vorsteiner but not necessarily included in the GTRS3 aero package include the CSL-style trunklid and GTS vented hood. Additionally, the widebody kit can be complemented with single- or three-piece Vorsteiner alloy wheels; the latter are present on this vehicle, sized 20 inches in diameter and strung with Michelin Pilot Sport PS2 summer tires measuring 285mm wide in front and a whopping 325mm in back.

Brembo GT brake assemblies have been installed behind the wheels. Red monoblock calipers, 365mm front and 345mm rear cross-drilled rotors; you know the story. The widened chassis has been dumped over the running gear using KW Automotive V3 coilovers, which include electronic signal interceptor boxes at each end of the car to trick the factory Electronic Damper Control system into thinking it still works (it doesn't, and the car now rides on the manually adjustable KWs at a predetermined height).

All Vorsteiner body mods and aero component installations were performed at C&C Collision in Pasadena, Calif. C&C is also selected as the exclusive North American installer for the GTRS3 kit and provided the matte "Military Green" paintwork and the USAF design accents. Those accents are in fact paint, albeit of a different, less permanent grade than the base coat so they can be removed if desired.

At day's end, Nik tosses me the key and invites me to a downhill carving session. Ignition on, M mode engaged, flip the righthand DCT paddle to get it in gear, and away we go.

It quickly occurs to me that driving this thing is not unlike driving something like a Lamborghini, what with its newfound thrust, 620-odd horses worth. But more than that, it's those flares that give the car what seems like half a foot of extra girth. I envision the rear flanks hanging off the road's edge, catching brush and debris, and find myself cheating toward the center line. A half dozen bends in and I settle down a bit, and I'm able to relish the humongous grip from those meaty Michelins.

More incredible is the smooth pull from the supercharged V8. It is so smooth, in fact, that the car builds speed deceptively, so I continue taking the turns gingerly. There's no question there's a lot more power and torque available, but it feels completely controllable. No drama whatsoever; it's almost dreamlike. And the DCT manu-matic helps make driving this 620-hp machine a largely point-and-shoot affair.

As far as forced induction goes, you couldn't really ask for more.