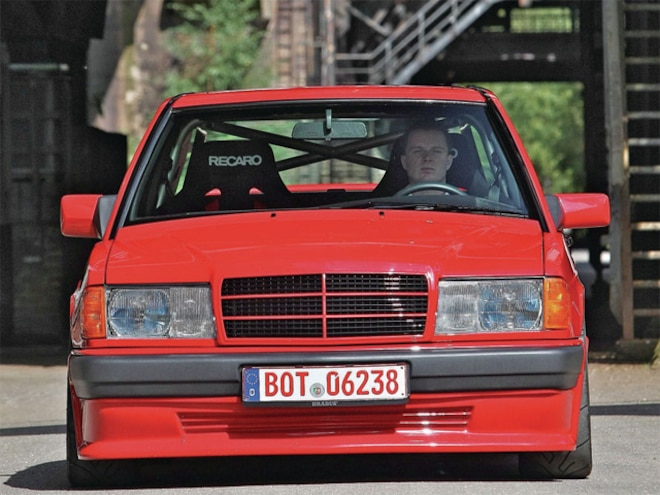 The Brabus 5.0 liter V8-powered 190E of 1984 was spectacular but expensive and impractical for most customers. So the M103 straight-six that debuted with the W124 in 1985 was a godsend.

As its reply to BMW’s 323i, Mercedes dropped the 2.6-liter version of this engine into the 190E, and the power race was on. Where AMG was more tentative, producing 3.2- and then 3.4-liter versions of this tough new straight-six, Brabus’ development chief Uli Gauffres went straight for the jugular with 3.6.

I remember driving the original red 3.6S back in 1988. I had already tested the 190E 2.5-16, and while this factory homologation special was a track demon, it lacked low-end torque in normal road conditions.

In comparison, the six-pot Brabus 190E 3.6S was a revelation. The combination of a lusty, high-revving six-cylinder in a relatively light car was an intoxicating mixture. It was super smooth with plenty of grunt down low, and being blueprinted and balanced, it revved to the skies. This car just wanted to go all the time, so even though you could trickle through town effortlessly in a high gear, your enthusiast brain wiring meant it really was hard to drive slow.

Low weight and a well-sorted chassis also meant agility and sharp handling, while strong torque and a limited-slip differential also provided loads of fun for drift junkies. In an age when compact cars really were compact, this was one very rapid and entertaining cross-country or autobahn stormer.

This one is a better-than-new, one-of-a-kind Brabus 190E 3.6S replica that was slowly built up in 2008, and I’m having vivid flashbacks to the day I drove the original.. This brand-new car belongs to Sven Gramm, Brabus’ effusive PR manager, who built it from scratch as his fun car. It’s a dead ringer for the 1988 demo car, right down to the identification stickers on the under-bonnet slam panel. One subtle touch from the original car is the front grille, welded to the hood and color-coded red so that it all looks one-piece. The egg crate part of the grille, wiper arms, door handles, boot trim, and rear badges are all painted Mercedes 040 gloss black.

This is one of my favorite Brabus cars of all time, Gramm says. It’s small and light, and has no electronics to interfere with the driving experience. It is effectively a 190E Clubsport, and is even faster and more hardcore than the factory 2.5-16 Evo 2.

A good donor car is paramount for such a project, and Gramm was lucky enough to find a 190E 2.6 equipped with a five-speed manual locally, owned by an elderly man since it was new. Immaculate inside and out, this car had been religiously serviced at the supplying Mercedes dealer, and had covered 175,000 accident-free kilometers (about 109,000 miles). The original owner had obviously intended to keep the car a while as he had specified uncommon options like the 70-liter long-range fuel tank and heavy-duty battery.

Gramm’s search for rare Brabus 3.6S parts began in earnest in January 2008, and he called in favors from friends both inside and outside of Brabus. Rummaging around Brabus’ spare parts warehouse coughed up the period front spoiler, alloy wheels, brakes, and some other parts. There were no rear spoilers, but we found the original mold and my colleague in the design department made one up for me by hand, Gramm says. I had to buy him dinnerbut it was worth it.

While the original Brabus suspension kit was in stock, things had moved on in 19 years. Gramm spoke to his contacts at Eibach and Bilstein, who provided more up-to-date solutions. The new springs and dampers drop ride height by 40mm from standard, over 16-inch Brabus Monoblock I alloy wheels with Yokohama 048 225/45 trackday rubber fitted to them.

The tires are available in soft, medium and medium-hard compounds, Gramm explains. The first set were soft and their grip was fantastic, but I got through them in just 2,500 miles. Now I have medium-hards.

To make sure the body stays rigid under the onslaught of this grippy, low profile rubber, and also as a safety measure, Gramm fitted a Weichers rear rollcage and rear suspension tower brace. The big brakes behind the front wheels use 286mm vented discs and four-pot calipers with fast road pads, and stop the car very effectively from autobahn speeds.

The speedo was recalibrated to read to 300km/h, and the center console now houses a battery of oil temperature gauges for the engine, gearbox, and rear differential. The car has an oil cooler for each of these components, the rear differential cooler being housed between the rear spoiler and the bootlid.

The 3.6-liter engine was another challenge altogether. Built individually for each 3.6S, this powerplant always started life as a new or slightly used 300E unit. When Gramm finally found one, the block and cylinder head ended up in the Brabus engine shop, where each was stripped and checked for any problems before work began.

The 3.6S’s unique 3,590cc capacity comes from a bore and stroke of 92.2x90.0mm, making the engine slightly over-square. A new steel billet crank is mated to lightened and balanced connecting rods and bespoke KS pistons. Knowing that he would only do perhaps 3,000 miles a year, Gramm opted for the largest oversized pistons to get the maximum displacement.

A local retired mechanic polished the connecting rods so they are not only lighter and perfectly balanced, they also look amazing. The cylinder head was gas-flowed, polished and given bigger valves, three-angle valve seats, and a Brabus high-lift camshaft. Compression ratio is 10.5:1. The air intake manifold was internally polished and eased to increase ram air, while on the exhaust side, a set of tubular headers and a stainless steel Brabus sport exhaust with twin 76mm outlets dramatically reduce back-pressure.

The original 3.6S did not need a catalytic converter; however, Gramm elected to have a pair of 100-cell metal sport cats installed so he can drive the car into urban areas that require the mandatory green sticker.

The positive effects that low weight and good torque from a large-displacement normally aspirated motor were starkly apparent as Uli Gauffres, in Gramm’s car, and me in a W211-based E V12, ran in tandem on the autobahn. As we accelerated, the 2,900-pound 190E 3.6S immediately pulled away while the turbos on the 4,500-pound E V12 were still spooling up. It was a few seconds before we blew by the older Brabus, but it did prove a point.

And Gramm is clearly enjoying his car. But only in nice weather, he says.