The Mansory Siracusa—too extreme for you 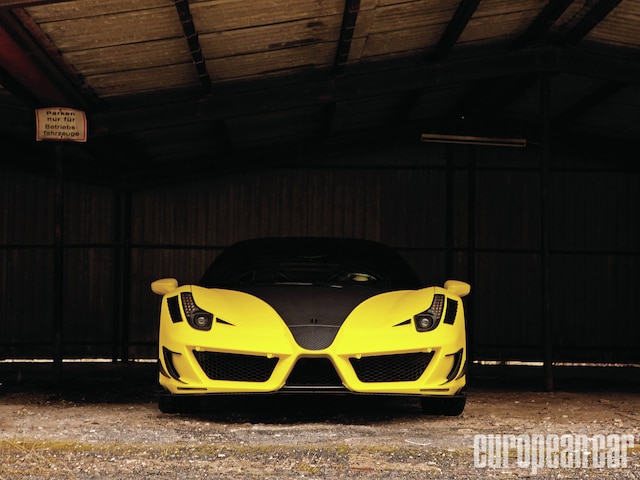 The new Ferrari 458 Italia is about as ostentatious as most of us would like to go. It’s in-your-face enough. But Khourosh Mansory caters to a different breed. Wallflowers simply need not apply as his cars command—no, they demand—attention. Lots of it. So unless you’re the kind of guy that can pull off wearing shades indoors, at night, the Mansory Siracusa probably isn’t the car for you.

There’s just a touch of Miami Vice about the Siracusa. It’s cool, but in a very weird way. And it certainly doesn’t belong in Brand, which is almost spitting distance from the Czech border in the old East Germany. Seemingly gripped by winter for nine months of the year, it’s a rundown area where an old Trabant is still a legitimate form of transport. People could ride donkeys here and it wouldn’t shock you all that much.

But the 458 draws the eye as it sits in the corner, resplendent in a ridiculously bright shade of yellow. It was a traffic stopper anyway, but now… now it’s something else entirely.

Mansory has taken the 458 Italia’s swooping, elegant lines and gone to town with the design, ditching the movable front wings and fitting a sculpted front end with an Enzo-style nose cone that looks just a touch F1, especially with the endplates and vents channeling air over the front wheels. There are new foglamps and the car looks wholly different, more sculpted than the base Ferrari.

The moveable aerodynamics were meant to be a big deal. That’s what Ferrari said anyway, and they were a clear link to the murderously expensive F1 project. Now, you won’t hear anybody say it’s marketing guff here, but question Khourosh on the old parts’ value and he simply raises an eyebrow. He doesn’t do wind tunnels, but has access to some of the most advanced computational fluid dynamics software on the market and is sure that the new configuration is a big step forward.

There are the naked carbon-fiber slats in the bonnet by the lights, the multi-bladed side skirts, rear wing and huge diffuser. It’s just a touch ’70s in its own weird way and brings to mind the Lamborghini Miura, but there’s a method to this madness. The cockpit is closed behind the driver, but instead of the rear screen retaining heat, those slats are open and the inevitable heat from the engine bay is sucked out of the car and channeled over that audacious rear wing.

The additional power is almost irrelevant. It’s the feeling, the shock factor, that makes this conversion worthwhile.

It isn’t subtle, especially in yellow and naked carbon, but it is spectacular. All those carbon parts, and the work on the interior, which is equally dramatic and comes with top-quality ultra-suede or your choice of leather, as well as carbon shift paddles, door panels, a retrimmed steering wheel and more on the center console, shaves 150 pounds off the overall weight of the car. The external stuff increases downforce, too.

Now Mansory has been forced to put some weight back in, as the outrageous volume of the engine had overpowered the stereo, and just sometimes you might want to listen to a different kind of music. So now there are two subwoofers, two amps and serious loudspeakers in there. Of course it’s all beautifully plumbed in, and the only external sign is the futuristic glass panel behind the seats with Tron-style accent lighting.

There is no more effective way to improve the handling and performance than to strip weight high up in the frame. Indeed Ferrari’s own Scuderia, which will surely come, will focus on reduced weight and the results will probably be not too dissimilar in terms of raw figures. Ferrari’s car might look slightly different, though.

The suspension is dropped 20mm, which gives the car a stronger grip at the apex at low or high speeds. You have to wonder how many folks will truly appreciate that nth degree of bite, or that additional fraction of aero grip. When in fact you don’t, hardly anyone will notice any discernible difference. They will just know it’s there, they will be able to tell their friends that their Mansory Siracusa is better than the factory fresh 458 their friend turned up in. That matters in some circles. Not mine, admittedly.

Of course more power would have been nice, as Mansory has adopted a light touch with the engine. There may well be a bigger power version down the line, but for now the tuners are getting to grips with the highly strung V8 and taking over the warranty doesn’t fill them with joy. So a new exhaust and gentle ECU remap squeeze 590 hp out of the powerplant now, and it has to be said it feels more than enough.

I head out on to the deserted, cold, wet and slippery road and after a few minutes of gentle pootling manage to grow a set and press the loud pedal with anything approaching conviction. The Ferrari underneath feels so damned visceral, so close to the edge, that in these conditions it takes a real gut check to attack it. But when I finally do it, Wow. Just, Wow.

Ferrari’s engine note is a unique thing, a high-pitched buzzsaw that somehow smooths out into pure music as the car snarls towards the horizon and its 9000-rpm redline. With the new exhaust it’s a blaring, aggressive, almost nasty creation. The additional power is almost irrelevant. It’s the feeling, the shock factor, that makes this conversion worthwhile. It just feels faster, even though I’d hazard a guess that in the real world this and the standard car could be separated by a cigarette paper on the dragstrip. On track the aero appendages would make themselves felt and the cornering speed should improve, but if you drive fast enough to find out on the road then you’re destined for a stay in jail.

Mansory has fitted his own centerlock wheels, too, 9x20 fronts and 11x21 rears, wrapped in Michelin Pilot Sport rubber, which gives the car a beautifully progressive feel at the limit. Even on this wet road the Siracusa responds to every miniscule input to the wheel and inspires the confidence to press on. Ferrari’s traction control system is still in full effect and stays firmly stuck in a secure setting. But even now I can feel ludicrous amounts of traction through the bend followed by a seductive slug of power.

The car feels ridiculous, lurching forward with every prod on the throttle. If anything, it feels even faster than the insane figures suggest, and while a McLaren might be faster, there’s no way it could be any more involving. The Ferrari is like a shot of adrenaline every time I flex a toe, it’s just a beast, and getting behind the wheel vindicates every cent spent on the car itself.

And that noise winds up from 2000 rpm into one of the most intoxicating, most addictive sounds in the motoring world. The flat-plane-crank scream is the polar opposite of the more thuggish Aston Martins and Lamborghinis of this world, but it still makes every hair on my neck crackle to attention as I blast down a straight section of road.

Mansory says the car now does 205 mph, or maybe a touch more, slightly faster than the factory car anyway, but don’t expect a major improvement on the 0-60 mph time. That was 3.2 seconds anyway, though, and how quickly do you really need to get there? Mansory didn’t have to make the 458 perform better, it was already ludicrously fast. And a car that looks like this isn’t meant for hammering around the track either. It may have taken its name from the historic racetrack on Sidly, and it may have more downforce than the 458 Italia, which is a racecar for the road if ever there was one. And yet still that isn’t this car’s purpose in life.

In truth, the Mansory will spend a lot of time going quite slowly indeed through the congested streets of Dubai, Monaco, Moscow and elsewhere. It’s a car that commands attention. So it will cruise past the world’s most exclusive nightclubs like the best of them, and jaws will hit the floor wherever it goes.

You see, sometimes, in some places, a standard Ferrari 458 Italia just isn’t enough to make an impression and you need a car like the Mansory Siracusa to stand out from the exclusive crowd. It’s a car for the modern-day Don Johnson, and you just know that Sonny Crockett would have felt right at home. 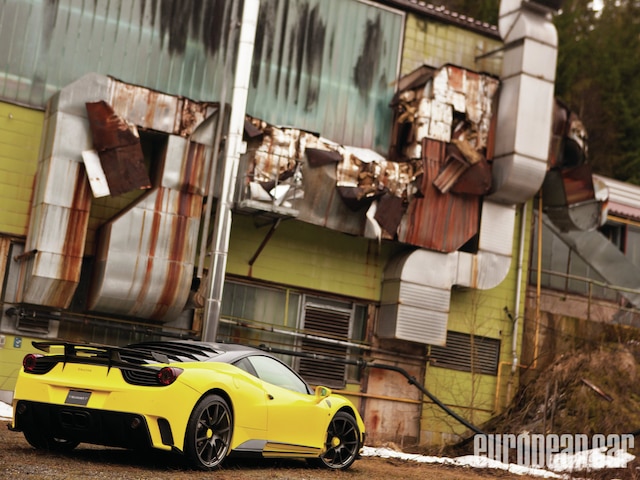