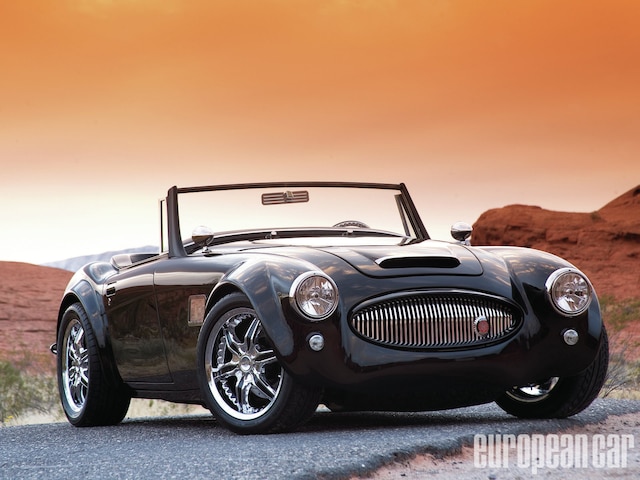 Good morning. The blare of the alarm clock at the ungodly time of 3:45 a.m. rattled the hotel room like a hungry baby bird. While the grating sound and the extra early hour would be reason for most to hit the snooze button, for this reporter it was a call to arms. For today was the first Saturday in November, the weekend after SEMA. There was a 24-hour day of shooting and driving ahead. The carrot dangled at the end of this grind would be the chance to drive Keith El-Bakri’s modern version of the Austin Healey

Pre-dawn in the desert outside of Las Vegas is an eerie, almost cerebral experience. Dozens of pairs of headlights dart around the dry lakebed six miles outside of Henderson, Nevada. As the dawn light starts to illuminate the edge of the sky, dozens of tractor trailers, and their respective show cars can be seen with the same number of photographers lined up waiting for the iridescent glow of citizen’s dawn. Supposedly the nitrogen in the desert atmosphere has a major effect on the purplish silver hue bestowed upon vehicles shot there. 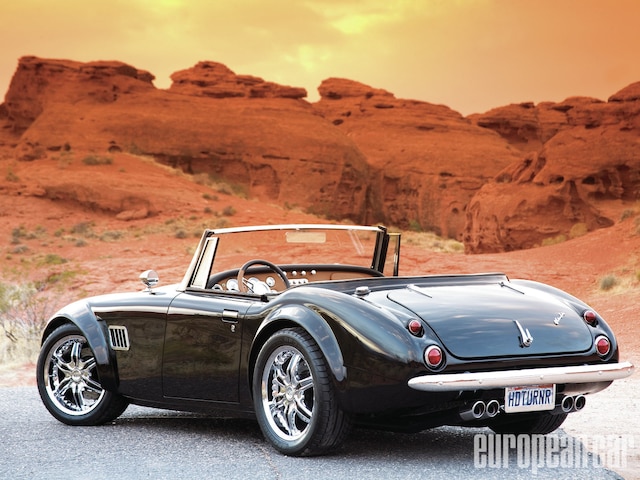 The weather cooperated, the light was there but the Austin Healey was nowhere to be found. Nonetheless, there was plenty of American Iron to document in this Martian-like landscape.

It turned out to be more convenient to shoot the Austin Healey in its hometown of St. George, Utah, over 150 miles away. With a mid-day shoot scheduled in another desert 20 miles outside of town on the opposite side of Vegas. The race was on.

After an hour or so of powering up dunes in a lifted Ford it was back on the road in a mad dash to catch the sunset in St. George. The possibility of a little wheel time had me taking full advantage of the 80-mph experimental highway speed from LV to St. George.

Owner Keith El-Bakri was waiting at the location as I pulled into the town of St. George where the car was built by Obsessive Customs and Design. Thanks to my “experimenting” on the experimental highway, the sun still remained a little high to start shooting and it looked like there may be time to cane this British roadster before the sun set. I mentioned to Keith that I had driven half-million-dollar prototypes and many other top-dollar sports cars without incident. Keith responded that he probably had over $500,000 in the build then told me a little bit about the process, which turned out to be quite extensive. My attempt to get a drive with hints was being diverted to an aspect of the car just as relevant as the way it would perform.

Keith actually had the car built once to a milder specification before he decided to go balls to the wall with the build. “I came up with the harebrained idea that I wanted a true work of art and a show car,” said Keith. In the process he and Obsessive Customs also created a ride that annihilates the performance of the original. Gone is the original 2,639cc straight-six, four-speed manual, and leaf spring rear suspension. In the place of those antiquated items is a Chevy 350 small-block topped with three chromed Rochester carbs, a Turbo 350 transmission and custom-made triangulated ladder bars with Heidts QA1 coilovers. The rearend had to be mocked up from drawing paper to cardboard to PVC pipe, to galvanized pipe before it could come to fruition as the custom rearend from Currie that would handle the majority of the Chevy’s 435 horsepower.

The mock-up process had to be used in the front end as well to get the motor and Mustang II suspension with coilovers and 2-inch drop spindles fitting perfectly underneath those achingly sensuous body lines. Which brings us to one of the most appealing aspects of this build.

“Because of the changes I wanted to make like integrating the front bumper into the body and removing the fender beading the shop had to incorporate steel and fiberglass,” said Keith. “Since they expand at different rates we had to literally let it sit in the desert sun for weeks to monitor the expansion.”

“I wonder if it would drift,” I thought to myself as my eyes glazed over at the mention of all this tedious bodywork.

It sounds like a recipe for disaster but somehow these ingredients work in harmony to create what could be one of the greatest roadster experiences ever.

My ears perk up when Keith mentions that the wheel arches are hand-formed out of steel. After having seen one to many ricers with cracked fender flares, the sound of a steel arch is enough to cause a stir in my loins. Besides, if the front end is the chest and the side skirts are the waist then the wheels arches are definitely the hips. I wanted to put my hands on these haunches and dance all night. Keith went on explaining the details of his incredibly immaculate re-creation of the ’62 Austin Healey such as the enclosed undercarriage and the chromed bits and bobs like the transmission pan and springs. See for yourself, they are spotless. Not necessarily the kind of springs you want to let a random photographer who just rolled into town take for a test-drive. Just as I thought I would be relegated to touching and not tasting this gorgeous black body (no pun or hidden meaning or anything intended by this statement) Keith’s hand went in his pocket. His hand emerged and slow motion ensued as Keith tossed the keys through the arid air of the Utah desert.

“Well, we gonna chat all day or are you gonna see what it can do?”

Before he could change his mind I jumped into the ocean of tan leather that made up the interior. With the sun waning I wasted no time in firing up the 350. The glorious orchestra from the 2.5-inch custom exhaust and Porsche tips filled the air as I slipped it into gear and hit the go pedal. Acceleration from the wild ponies powering the svelte British roadster was dubious at first but as soon as the tires hooked up the rate of travel, amplified by being in a roadster, turned positively ballistic. Sixty mph arrived in a matter of seconds whereupon Keith mentioned a highway entrance to the left. The money invested in this roadster temporarily left my mind as I pitched the car to the left. Slow motion ensued once again as the rear end got loose before I easily compensated with a bit of opposite lock and we got sideways at the apex. It wasn’t a drift but it was close. And it felt incredibly manageable for a 2,000-pound roadster the size of a bathtub with a 435-hp V8 in front and seven-inch wide BFGoodrich meats out back. It sounds like a recipe for disaster but somehow these ingredients work in harmony to create what could be one of the greatest roadster experiences ever, or at least of the day. Of course, after getting on the highway and closing in on 130 mph I decided it was time to use the Wilwood brakes to bring the car down to a reasonable pace, and keep my license.

Amped by the test-drive I got the car shot under the glowing embers of the Utah sunset then jumped right back on the highway and drove the 600 miles home. Arriving at 3 a.m. I laid down on the bed. Mr. Kitty circled around me, purring vigorously as I drifted off. Seven hundred miles, 24 hours, four different photo shoots, three different deserts in two different states. It had been “on since the break of dawn” with the Austin being the highlight of the mission. As I drifted off to sleep Mr. Kitty’s purrs turned to exhaust notes as I dreamt of the black beauty and our brief romance in the Utah desert. 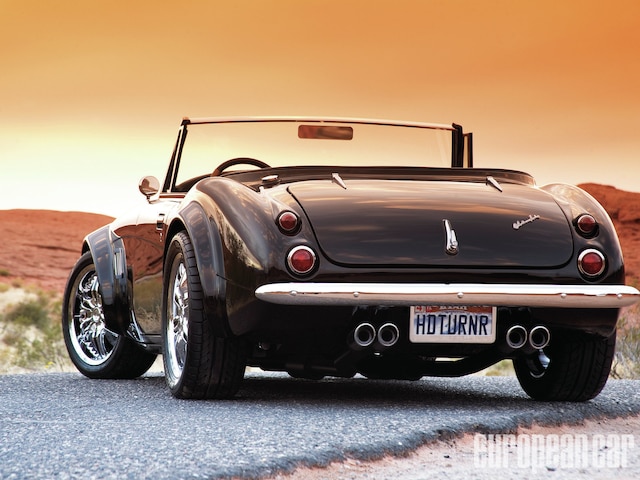