Not many people would consider a supercharged carbon fiber widebody for the E-Type Coupe... Regarded by many as the most beautiful car ever built, the E-Type Roadster's coupe cousin was rather more Polarizing. To some, the hard-top was the epitome of style, while others regarded it as the ugly duckling. But whatever your opinion, there's no denying the impact these classic coupes had, as well as the cult status they would command.

With anything that stirs such an emotional response, it takes a brave man to consider deflowering such a creation, but Jim Cooper had no compunction. We could hardly believe our eyes when we stumbled across his ’69 Series II 2+2 at this year’s Dana Point Concours d’Elegance. Judging by the braided lines running from the supercharger and nitrous system, further investigation was required. And as we dug a little deeper, its carbon fiber widebody became apparent.

After bringing the XKE to our photo studio, Jim gave us the curator’s tour. As he rattled through its pages of features (the full list is on europeancarweb.com) our minds needed to reboot as we struggled to comprehend everything.

Jim had been a Jaguar fanatic since the age of 17 – his first was a Mk9 because “it looked like a Rolls.”

His obsession found him pushing the limits of what his collection could do. His adventures included several straight-six 4.2L engines, some with huge turbos. However, this E-Type 2+2 would be his most ambitious project to date. Rather than switch to a small-block Chevy, which would be easier and cheaper to tune, Jim again stuck to the original 4.2 but added a clutch-controlled, intercooled Eaton supercharger, activated by a switch in the cockpit.

The 4.2 has racing internals, three 45 DCOE Webers modified to create a digitally controlled fuel-injection system plus a NOS nitrous system.

To ensure the engine could breathe properly, the tubular headers feed into a 2.5" stainless steel exhaust system. In addition to rear mufflers, there are also side-pipes to allow all 450hp (estimated) to be heard loud and clear.

From his experience with turbo powerplants, he knew traction would be an issue because the E-type’s slender body meant wider wheels and tires would be problematic. So Jim took it upon himself to create one-off widebody components.

He had a shop create rear fenders that are 4" wider but blend perfectly with the stock body. These were then molded in carbon fiber, along with the hood that would incorporate distinctive cooling outlets.

With more than enough space to accommodate appropriately sticky tires, the opportunity was taken to fit the smaller rear lights from the Series 1 XKE, along with its sculptural bumper. The front bumper was removed entirely, causing it to resemble the wonderful D-Type racer.

The Series II 2+2 had a more raked windshield than other models, better suiting the longer wheelbase, longer doors and higher roofline. However, Jim decided to fit the shorter Coupe’s windshield and A-pillars. This meant the roofline had to be reconstructed, creating yet another unique feature of this conversion.

There are a string of other details, such as the three wiper blades from the earlier model. With the carbon rear fenders fitted, he relocated the fuel filler to the tailgate, modifying it to accept the filler cap and fitting a clear third brake light above the rear glass.

When closed, the tailgate seals the baffled racing fuel cell fitted under the floor. It’s paired with a racing pump to feed the big Webers.

Once completed, the car was shot in DuPont Silver metalflake. The window trim was painted flat-black and a delicate red pinstripe applied under the side windows.

Even the Jag’s underside wasn’t overlooked. Although out of sight, it has an aluminum belly pan, with all the welds smoothed before painting. The same treatment was used on every welded seam.

He was on a mission to prove he could transform the classic E-Type beyond anybody’s expectations.

To match the exterior, the cockpit needed to be extraordinary, which Jim achieved with perforated lipstick-red leather on Series 1 seats.

He also reconfigured the interior, making it more spacious by removing the 2+2’s small rear seats. This allowed him to move the front chairs back, while shifting the dash forward 6".

With matching red leather trim, carpet and harnesses, Jim fitted turned aluminum door panels to compliment the exposed interior body panels and fuel filler. He also had an SCCA-spec rollcage built into the rear of the car and painted body color.

The delightful period mirrors on the front fenders have two-way glass and house cameras, with the images viewed on two monitors mounted above the gearshift.

While some might consider such extensive modifications to be excessive, Jim saw things differently. He was on a mission to prove he could transform the classic E-Type beyond anybody’s expectations. That included the anchors, which received a Jaguar XJS disc brake system with larger calipers and functional BMW ABS.

Jim’s love affair with Jaguar goes beyond devotion to clinical obsession. His original collection of various British cars was sold to fund a brief dalliance with waterborne craft before he returned to focus on one marque: Jaguar.

“It was the cars or the boats,” his patient wife explained, seemingly resigned to life as an E-Type widow, but one who shares Jim’s passion for British sports cars.

And while we’ve only scratched the surface of the work carried out on this timeless coupe, we’ve hopefully shared a little of Jim’s creativity that’s seen him retain the original motor, add some classic hot rod tuning tricks, while respecting the purity of an original masterpiece. 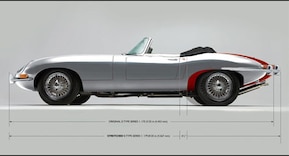 While the Jaguar E-Type is regarded by many as the most beautiful sports car of all time, that doesn’t mean people aren’t afraid to put their own mark on it. Click to read about the long-wheelbase 1968 Jaguar E-Type. - European Car Magazine